Race report: Today would appear to be one for the sprinters on Stage 7 of La Vuelta from Almadйn to Talavera de la Reina. But nothing was typical as a massive crash in the bunch sprint took out half the field as Marcel Kittle of Skil-Shimano took the win. Read on!

A hot flat day spells breakaway! And that’s what we got when a quartet got clear in the early going of the stage.

The Cofidis pair of Luis Angel Mate Mardones and Julien Fouchard, AG2R’s Steve Houanard, and Andalucia’s Antonio Cabello Baena took their leave of the group, making their move and building upwards of a nine minute lead before the peloton set the hook and began reeling them in.

Another hot day at the Vuelta saw all the team helpers in the trenches making multiple trips to the team cars to bring bottles up to their teammates. Fluids have been the theme of this Vuelta with all the heat the riders have faced since the start.

Along with the heat, the riders were dealing with a tricky cross wind for most of the ride, causing riders maybe to have to fight more than they’d like on a flat stage like today to hold a good position.

At the 45 km to go mark, the break had been brought back to 2:30, as race leader Sylvain Chavanel (Cofidis) sat comfortably in the field, protected from the wind.

30km to go a little touch of wheels took down a VacanSoleil, BMC, and Quick Step trio, but all were up, serviced, and riding again in no time, chasing back on to the peloton relatively easily.

But as the road turned into the crosswind again, Garmin went to the front to drive the pace, trying to utilize the wind to break the group up. The speeds went up to over 70km an hour as Sky joined in putting the hammer down. Sure enough, gaps were beginning to form throughout the body of the peloton.

But as the field turned into a block headwind, the gaps were closed and the pace eased off a bit. Still, the earlier accelerations had brought the break down to under a minute.

Cofidis, perhaps sensing the break’s impending doom, played one of their two cards in the break as Mate went up the road solo. He was the highest placed rider in the break, but still over 14 minutes off the GC lead. The break chased a bit, but the field was breathing down their necks. All predictions of a bunch sprint seemed to be coming to fruition. As Mate was reeled in, his teammate Fouchard countered it and got fairly clear for the moment. But the group loomed just 23 seconds behind with just under 14km to go. 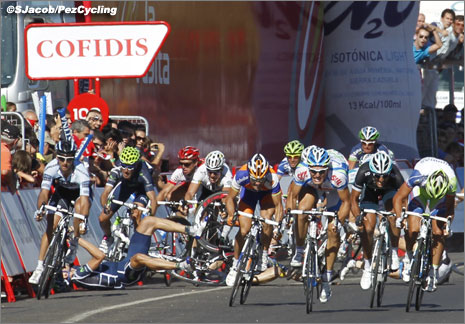 The other 3 in the break were swallowed up by the hurtling peloton, and it was a matter of time for the same to happen to Fouchard. After he was swept up HTC took control of the front of the main field, with the teams of the other hopefuls nearby. It was anybody’s game at 4km to go. There were some funky turns and roundabouts for the group to worry about for the group as everyone jostled for position up front.

Under 2km to go, and peloton was strung out like a junkie, under the impetus of HTC Highroad. Skil Shimano took over and suddenly had 4 guys on the front under the 1km to go banner. Shimano fell apart as Garmin sent a guy to the front and other teams sought control of the tempo. Then the group went haywire up front as a touch of wheels took Tyler Farrar out, hitting the deck super hard, then the carnage started as riders went skittering across the road. The peloton ground to a halt as dominoes took over, riders and bikes all over the place. 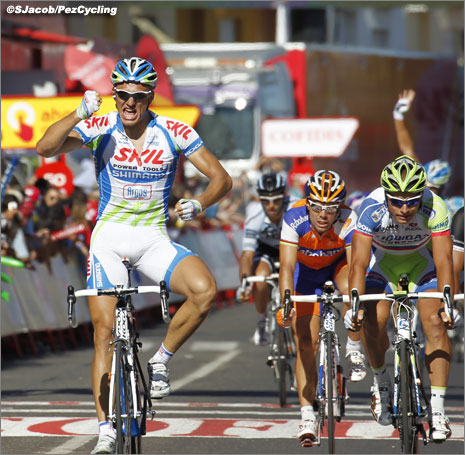 Of the four of five riders to make it through the wreckage, Marcel Kittel of Skil Shimano took the win just ahead of Peter Sagan.

Behind, the twisted mass of crashed bikes and riders started to sort themselves out as best they could. Tyler Farrar was still on his back, alert and communicating with a teammate, but clearly hurting. Other riders were collecting bikes or and checking body parts and limping over the line.

Nothing was typical about that sprint, stay tuned to Pez for more Vuelta coverage!