Another flat day greeted the riders in Spain today and with the big time trial on tomorrow it was left to the sprinters to animate the race.

The route of stage 10 provided some nice views along the Galician coastline but apart from the small climb just 14km into the stage it was dead flat. For a country as hilly as Spain to have a stage this flat was quite an achievement by the organizers and an obvious effort to give the sprinters a chance before the GC smackdown in the time trial tomorrow.

This is as flat as Spain gets and the sprinters weren’t going to let this stage slip out of their fingers.

The day’s attack.
With the GC guys hoping for a rest in the peloton & the sprinter’s teams clearly highlighting this as a stage for them, the chance of a long breakaway succeeding was minimal to say the least. This didn’t stop the ever attacking Javier Francisco Aramendia Lorente (Caja Rural) from having a go inside the first five kilometers though and he was quickly joined by Adrian Palomares Villaplana (Andalucia). Lorente now has three long range attacks in this year’s Vuelta to his name and unfortunately no results to go with all the effort. He doesn’t stop trying though and I guess that is to be admired. 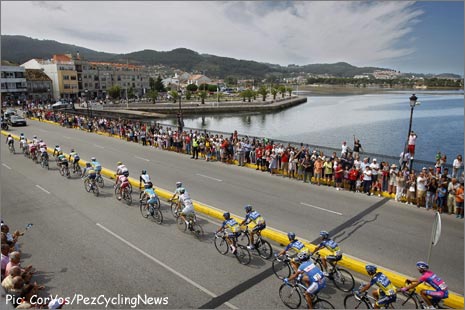 The race route followed the Galician coastline today giving us spectacular views, but little in the way of difficulties.

So with just two Spaniards out front that were absolutely no threat to the GC riders and a long day in the saddle ahead of them, this was the perfect attack as far as the peloton was concerned so the pair’s gap quickly grew. With 3 sprint wins for Argos-Shimano with their young German star Degenkolb from three sprints in the Vuelta the other teams were happy to leave the Dutch squad with the responsibility of the chase and they duly complied doing all the early work.

3 is good but….
Speaking before the stage, Degenkolb was obviously happy with his performance so far in the race, but was keen for more,

“We have no pressure after having won three stages already. I know that there might be some wind. But my team has proven to know how to race in these conditions. It’ll be more nervous today but everyone knows that I won’t be satisfied with what I already got. I want more.”

For most of the stage the Argos boys did their job for Degenkolb, pulling the peloton along at a comfortable pace, never letting the leaders pull out to more than four minutes as the two out front started to struggle. With 70km remaining the gap dropped significantly to the peloton as Sky started the chase for their sprinter Ben Swift, but their chase was actually too quick, dropping the gap to just over 1 minute. With the best situation for the sprinters being that the break got caught as late as possible, the impetus went out of the chase and the gap rose back up to 3m30s with 60km remaining.

The break is done
With 34km to go though it was all over with the two escapees being swept up by Orica-GreenEdge who were in control of the front of the peloton as they tried to set the stage up for their sprinter Alan Davis. There was still a long way to go before the sprint but with the race route following the coast, GreenEdge seemed to think some high speed efforts at 30km to go could put Degenkolb into difficulty and they put the hammer down. The only riders that were in trouble with this extreme turn of speed were just a few stragglers at the back though and the GreenEdge effort was called off 15km later with the GC teams of Katusha, SKY and Rabobank taking over.

With 15km remaining SKY turned on the gas some more putting the entire peloton under pressure but as with GreenEdge’s earlier effort only the lesser names were dropped – even if those names included last year’s Vuelta winner Cobo who is a mere shadow of his 2011 self.

It’s sprint time!
At 2 km before the finish, FDJ took over affairs to look after their young French Champion Bouhanni and RadioShack were doing the same for their man, Bennati. It wasn’t to be though for the other teams as Degenkolb launched his sprint 300m before the finish, flying past Benatti and unable to be challenged by the perfectly positioned Bouhanni. In fact the young FDJ sprinter was on Degenkolb’s wheel and tried to come around but was unable to get further than his rear derailleur as Degenkolb seemingly found another couple of watts of power in the final meters. 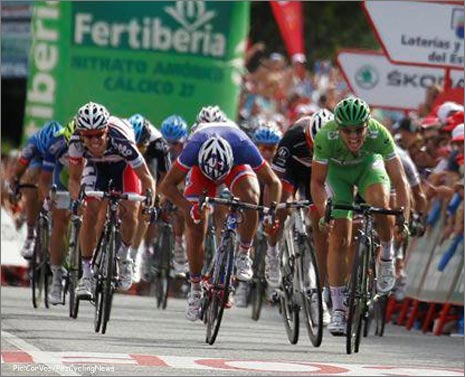 Four sprints in the Vuelta and four victories for Degenkolb, things couldn’t have gone any better for the Argos-Shimano squad. Degenkolb now has a true stranglehold on the green jersey also and is keen to take it all the way to the end of the Vuelta but there’s the little matter of some serious mountains in his way first. 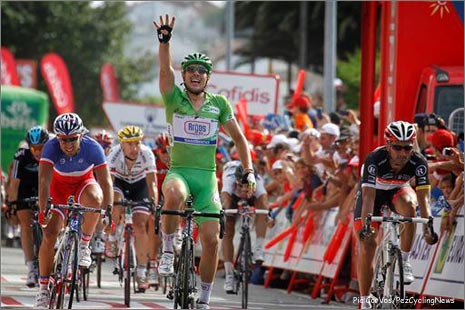 Keep it tuned to Pez tomorrow for all the action from the time trial where we should see the GC shaken up and stirred around.

Toolbox: Sports Drinks – Who Needs What?