Race Report: Design a stage profile with a steep summit finish and you know who is going to be attacking at the front, yes the little stick of Catalan dynamite; Joaquim Rodriguez. Alberto Contador tried to stay with him, and nearly managed it, but Alejandro Valverde and Chris Froome were in a little bit of trouble. It’s still all to play for, with 1 minute 20 seconds separating the top four.

There will be some sore legs in the peloton after yesterdays time trial, but today’s stage 12 of 190.5 kilometres from Vilagarcia de Arousa to Dumbria shouldn’t bother anyone much until the final steep 2 kilometres to the summit of the Mirador de Йzaro, in the final the road surface is rough and there are ramps of 12%, 14%, 22% and one section of 25%, the road signs actually say 30%, yea so it’s steep! 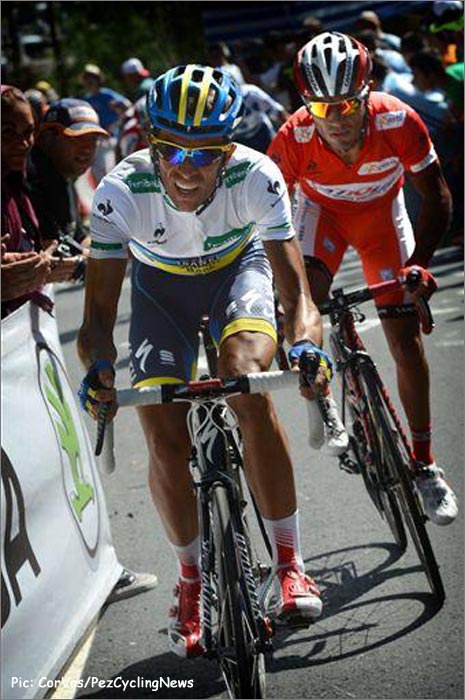 Once again Valverde & Froome were gapped by Contador and Rodriguez, with the little man in red looking stronger by the day.

After a fast start with quite a few riders keen on making an early break, they all fail until Amaлl Moinard (BMC), Mikel Astarloza (Euskaltel-Euskadi), Kevin De Weert (Omega Pharma – Quick-Step) and Cameron Meyer (Orica-GreenEdge) seem to be making some headway with 85 kilometres covered. Vacansoleil-DCM was in control of the bunch and they let the gap grow.

After 95 kilometres the four had a lead of 5 minutes coming through the feed zone in Oleiros and by the town of Queiruga they had over 7 minutes with less than 80 kilometres remaining. Mikel Astarloza is the highest place rider on GC in the leading group in 32nd position at 13:30 down on the red jersey of Joaquim Rodriguez. If the lead was to gain more time it could become dangerous to some of the riders in the top ten, unlikely, but at this moment you never know.

Katusha had the front of the peloton and the lead had come down to 6:18 at the sprint in Noia with 62.1 kilometres to go, Astarloza crossed the line first.

The course follows the coast for most of the stage until Caldebarcos, it then heads in land for the last 10 kilometres and the stiff climb to the line, the early film of spectators making their way up the Mirador de Йzaro shows many pushing their bikes.

45 kilometres to go and the lead was down to 4:44 and Katusha had decided that it was time the chase was more a bit more serious and had put double Vuelta winner; Denis Menchov on the front.

A crash with Xavier Zandio (Sky) and Nacer Bouhanni (FDJ-BigMat) into a traffic island looked bad for Zandio who landed on his face and had to go in the ambulance in the end due to cuts and what looked like a broken nose. Zandio had to abandon due to his injuries which could affect Chris Froome later in the Vuelta as he would have been a great help in the mountains. The ambulance had to pass the peloton to take him to the nearest hospital.

The gap was still at 4:20 coming into the last 25 kilometres.

25 Kilometres to Go
The Movistar team had moved to the front for Alejandro Valverde, he has warned before the start that being in the correct position at the bottom would be of utmost importance as the lead was back to 3:14 at 17 kilometres out, the break were riding at 40 kph as the chase was at 44 kph.

Into the last 10 kilometres and the race turned in towards the treacherous climb of the Mirador de Йzaro, the lead was down to 2 minutes with a few riders starting to get dropped off the back of the peloton.

The race now had to ride in to a block headwind and the speed dropped a little for break and bunch and Katusha, Rabobank, Saxo/Tinkoff, Sky and Movistar all had men on the front and with 5 K’s to go the four up front had 58 seconds.

BMC brought Philippe Gilbert forward as this climb would suit him, if he has the form of last year. Juan Antonio Flecha and Ian Stannard forced the pace up for Sky leader Froome in third position. The break fell apart as they hit the climb under the impetus of Astarloza, his team leader; Igor Anton jumped away from the chasers passing the break one after another.

Next to go was Rodriguez with Contador on his wheel, Froome and Valverde distanced slightly. Henao was leading behind, bringing Valverde and Froome up in a group of others.

Once the lead was obviously visible, then Contador rode on the front, Valverde was lower down the climb with Froome further back. Rodriguez wanted those bonus seconds and attacked Contador 200 metres from the line and Contador could only watch his back wheel 8 seconds ahead of him take the stage. 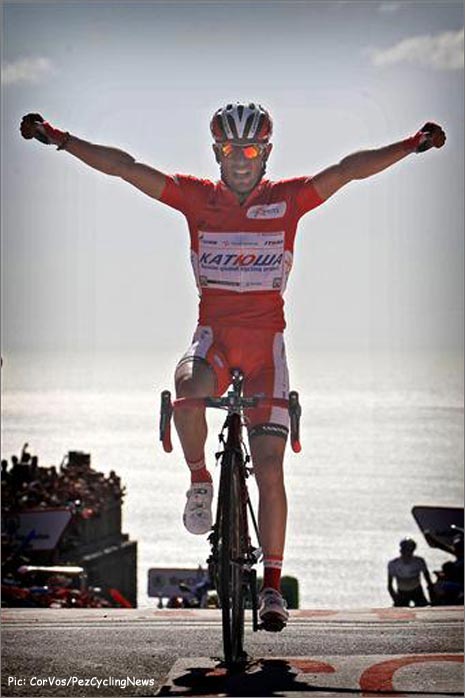 Alejandro Valverde was next at 13, Robert Gesink (Rabobank) at 20 and Chris Froome at 23 seconds. Rodriguez knew what he had to do today as the finish suited his talents to a tee, his overall lead now is slightly more comfortable, but the top four are still so close to one another.

Stay PEZ for all the Spanish excitement…lots more to come yet!