With the breakaways generally not making it succesfully to the finish line so far in this year’s Vuelta, today’s Friday the 13th Stage looked like being a lucky one for the escape artists. Most of the experts, riders and director sportifs interviewed before the race thought a break would rule today and in the end it was the case as we were treated to a classic nail-biting finish of peloton vs break vs break!

Why was today’s stage tipped to succeed for a break? Well for starters the profile of the stage was just right, slightly lumpy with many small twisting roads and secondly with just one sprinter winning so far in the race other teams would be looking at different tactics.

A lumpy stage, just perfect for the breakaways.

With everyone agreed that the break could succeed today, the competition to get in said break was intense. Finally after a torrid first hour of racing, seven riders skipped clear of the peloton and with the gap rising quickly this was to be the day’s break, Linus Gerdemann (RadioShack-Nissan), Thomas de Gendt (Vacansoleil-DCM), Simon Clarke (Orica-GreenEdge), Cameron Meyer (Orica-GreenEdge), Juan Antonio Flecha (Sky), Elia Viviani (Liquigas-Cannondale) and Stephen Cummings (BMC).

Cameron Meyer was a man in form making his 3rd break of the Vuelta and he had his teammate and stage 4 winner with him, Simon Clarke so obviously GreenEdge were hopeful that this break would make it to the end. Unfortunately for Meyer though his breaks in this year’s race have had the habit of being caught in the dying kilometres of the race and it was Argos-Shimano back in the peloton who would be hoping for history repeating itself today as they took up the chase. 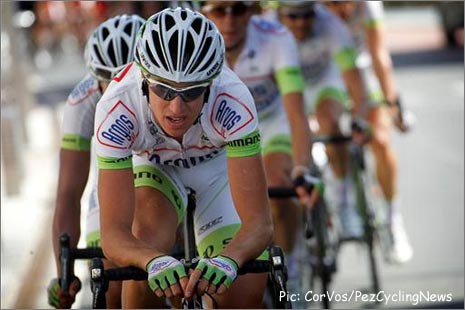 Argos-Shimano have had an amazing Vuelta so far but they’ve had to do A LOT of work on the front of the peloton and today was no exception.

With an amazing four victories from four sprints John Degenkolb was the hot favorite if the break did come back especially seeing that one of his biggest rivals in the sprints was Elia Viviani who was in the break using up all his energy. Of course with those four victories comes the responsibility of doing the majority of the chasing and after already doing a lot of chasing in this year’s Vuelta the Argos team was starting to look tired. They were able to hold the break around the 3 to 4 minute mark all day but were unable to close the gap down in the final kilometres when it ws really needed.

With 30km remaining the break was guarding their gap at 2minutes but Argos were spent and it was up to the other teams to try to close it down. Without the Argos armada at full capacity the peloton was disorganized as small groups of riders tried to cross the gap to the break but none could make it as the seven were still working very well together. There was some serious firepower in the front group with the likes of Flecha, de Gendt and Cummings and with 10km remaining and the gap still at 1minute it looked likely that the break would survive. 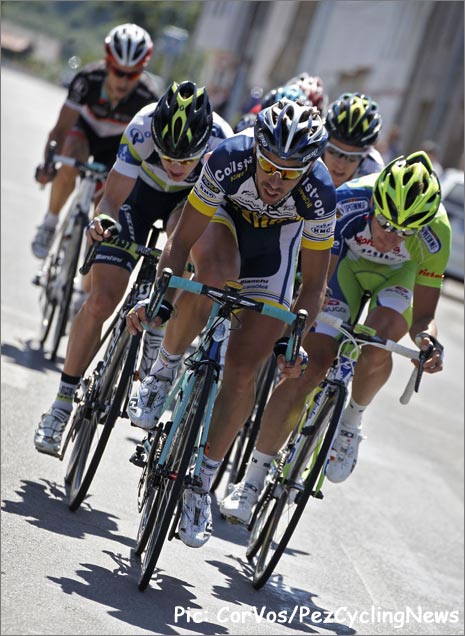 The seven attackers couldn’t rest up and start to play games though with such a small lead but with fast finishing Viviani in their midst it was obvious to the six others that they had to thin the group. It was the veteran Flecha who attacked first with 7km remaining and although he was eventually brought back, the struggle to do so dislodged Viviani and the group was now down to six.

The odds were getting better for non sprinter Cummings but they were still not good enough as he decided to take off alone with just under 4km remaining. A perfect distance to go for the champion pursuiter and he didn’t hesitate giving it his all as Gerdermann and co hesitated for the slightest of moments a small gap grew. Cameron Meyer saw the danger and attacked on his own to be quickly joined by Cummings ex-teammate Flecha as they desperately chased down the Englishman.

It was now a three way, 3km pursuit race as three different groups on the road were separated by mere meters, Cummings on his own, Flecha and Meyer together, followed very closely by De Gendt, Gerdemann and Clarke. At one stage it looked like Meyer and Flecha would close the gap but Cummings dug deep holding on to win the stage solo after a long difficult day in the break and a perfectly timed late attack. Meyer crossed the line just moments later beating Flecha in the sprint for 2nd and then Clarke led the others home giving GreenEdge 2nd and 4th on the day. 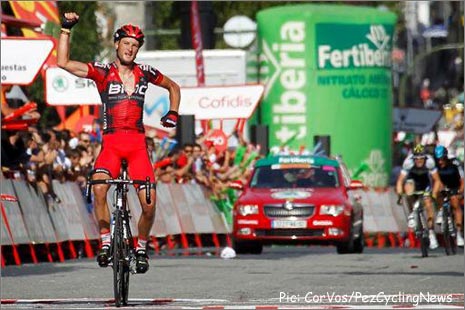 Finally the break got there today and we were treated to a quality, tactical finish. Enjoy the win Steve as tomorrow’s mountain stage is not going to be for you. Should be a great one for a GC shakeup though – keep it tuned to Pez!