Race Report: I’m not a boxing fan, but if you had four matched fighters toe to toe trading punches without any quarter given, that would describe the last four kilometres of today’s stage to the summit of the Puerto de Ancares. The podium has not been settled yet, but the diminutive “Purito” Rodriguez showed he had a lot of fight left.

Big long climbs today between Palace de Rei and the summit finish on the Puetro de Ancares after 149.2 kilometres. First climb starts after 29.7, the 3rd Cat Alto de Castro, and then the 2nd Cat Alto de Vilaesteva begins after 61.5 kilometres, the lower 3rd Cat Alto de O Lago after 84.1. The big climb of the 1st Cat Alto Folgueiras de Aigas starts 115.9 out from the start and climbs for 9.7 kilometres to an altitude of 950 meters with an average slope of 6.7%, this is followed by the finishing climb of the 1st Cat Puerto de Ancares, 9.5 kilometres long up to 1,470 metres with an average slope of 8.1% with the steepest ramp of 12,8%. A tough day in the saddle.

Movistar’s Josй Joaquнn Rojas didn’t take the start due to the crash 2 kilometres from the finish yesterday in Ferrol, he is suffering from muscular strain in the vast internus of his right leg, Rojas has not had a great year as he had to abandon the Tour de France with a triple collarbone fracture on the fourth day of racing. Jurgen Van Den Broeck & Jens Debusschere of Lotto Belisol also didn’t start and they were soon joined by team mate Olivier Kaisen and Rafa Valls (Vacansoleil-DCM).

Saxo Bank-Tinkoff Bank was doing the work for Alberto Contador as Katusha sat back and left them to it. Over the Alto de Castro and David Moncoutie (Cofidis) was first over the top, maybe going for the KOM again this year, the lead was nearly 2 minutes.

At the bottom of the second climb, the Alto de Vilaesteva, the escape group had been pulled back a little to an advantage of 1:20. At the top Simon Clarke (Orica-GreenEdge) was first, Serge Pauwels (Omega Pharma – Quick-Step) second and Moncoutie third, the lead had stretched to 1:45 as they headed towards the third climb of the day; the Alto de O Lago which tops out 58.8 kilometres from the finish. The five KOM points that Clarke took moved him into second spot in the climber’s prize, 1 point less than Alejandro Valverde (Movistar).

The bunch took their time up the Alto O Lago and crested 2:35 after the leaders. Clarke took another 3 points to go into the virtual mountains lead. On the descent Alessandro Ballan (BMC), Jan Bakelants (RadioShack-Nissan) and Rudy Molard (Cofidis) broke away from the other leaders; they all came back together again as the hit the 50 kilometres to go point.

50 K’s To Go
The lead was up to 2:45 as Saxo/Tinkoff still controlled the peloton. In the valley before the start of the Alto Folgueiras de Aigas (1st Cat) the lead went over 3 minutes for the 16 riders.

At the base of the Alto Folgueiras de Aigas with 33.3 kilometres from the finish, the lead was 2:30, Molard did a lot of the work for the escapees and Saxo/Tinkoff’s Matteo Tossato lead the bunch for the first sections then Sergio Paulinho took over. Contador had five riders round him at the front with Rodriguez and Katusha next in line with Sky and Froome on their wheels, Alejandro Valverde had infiltrated the Sky train

Biel Kadri (Ag2r-La Mondiale) was dropped by the break and caught by the bunch, after that he would have taken his place in the large group forming off the back, Ballan was next, then Molard, Palomares and Paterski also couldn’t hold on.

The lead was tumbling down as there were only ten of them left and Saxo/Tinkoff had the race by the scruff of the neck on the steepest section which was ramping at 9%. Alberto Contador punctured on the climb and received a front wheel from team mate Jesus Hernandez and paced back to the front.

Clarke was first again over the top for maximum points, Moncoutie second and Pauwels third, the lead was only 1:37, from here they had a ride of 13.1 kilometres before the start of the long climb to the finish on the top of the Puerto de Ancares.

15 K’s To The Summit Finish
Alberto Losada (Katusha) rode away from his lead companions to distance them by 30 seconds at the base of the Puerto de Ancares, Saxo/Tinkoff was still putting the pressure on the peloton, which was now around 40 riders, a further 1:54 back. Garate, Pauwels, Moreno, Cataldo, Txurruka and Bakelants were between lead and bunch; Clarke sat up and dropped back with the hope of the KOM jersey tonight.

Saxo Bank put the peloton in one long line as they came under the 8K to go banner, Losada still had 1:21, and the pace was putting Robert Gesink in trouble at the back. 1:04 at the next kilometre and the speed in the peloton was very hot. 6 to go and Losada was now leading only by 47 seconds.

The 5 Kilometre Banner
Alberto Losada was still trying his hardest to stay away, but there were still the hardest slopes to come, he now had 26 seconds on the stars of the Vuelta coming up behind him. At 4 kilometres they could see him just up the road; the chase group looked to be only 15 riders.

And BANG!
The first attack came from a Saxo rider to put Contador and Valverde off the front, Froome missed the move and Rodriguez struggled to keep pace with the other two. Contador could see it and put in another surge, but the three stayed together and were joined by Dani Moreno (Katusha) and Andrew Talansky (Garmin-Sharp). Froome had Henao and Uran to pull him up to the leaders, but it was treacle slow, but they eventually did it. 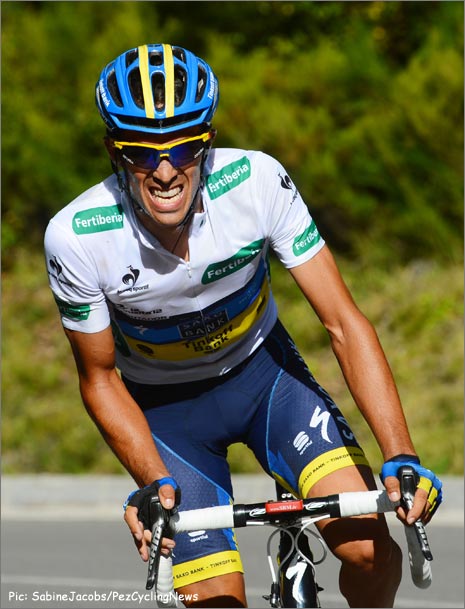 As Froome was spitting distance from the others, Contador made an enormous attack to distance everyone by 50 metres and then consolidate that lead on the steeper section. Uran pulled Froome to the front and then he attacked, but not with the same strength as Contador. Valverde and Rodriguez closed on him and dropped him; he had used all he had to make the failed attack.

At the front Contador fought his way through the throng, but Rodriguez had enough to drop Valverde and catch Contador. Alberto could not believe it, but put the wheel in front of Joaquim. In sight of the line Rodriguez launches himself at the line as all Contador could do was watch him disappear over the line 5 seconds ahead. 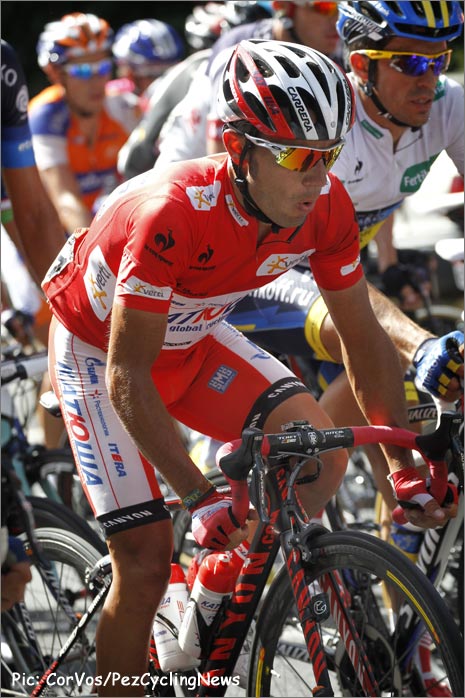 Rodriguez came under pressure from all comers today but stayed cool, calm and collected and won!

Valverde was at 13 seconds and Froome was outsprinted to the line by Dani Moreno 35 seconds later. It’s still the same four fighting it out; Rodriguez has 22 seconds on Contador and 1.41 on Froome and Valverde who are now head to head for the last podium place.

Today was exciting and decisive, tomorrow and Monday there will be more of the same from Spain…keep it PEZ!