Race report: Here be wolves! Here be bears! We’re in the Picos de Europa, one of the wilder regions of western Europe, where the rarer wildlife has a tenuous foothold in the mountains. Some of the best riders, some real animals, have written their names into the history books up here: Lejarreta, Jalabert, Delgado, Millar, Herrera. Who will join them today?

Over the Puerto de Pajares firstly, and it’s a gentle 380 meter altitude gain from the starter’s flag before the racers flee downhill for the next forty kilometres, through the sprint at Mieres and onto the category-three climb of the Santo Emiliano.

Interestingly, no Katusha or Saxo/Tinkoff representation – that powder being very much kept in a water-tight container until it is needed on the hell ride to the Lagos de Covadonga themselves.

The lead is like a tear in a beloved old t-shirt. It starts as a small burn hole, then it widens a little more, then all of a sudden it just rips open … the peloton figures that none of the escapees are a problem and give them their head. Half-distance and the lead is twelve minutes, the main bunch not caring a jot.

The gap goes out further towards the quarter-hour and the climbing starts again. David de la Fuente leads over the Mirador del Fito, a first category climb to just under 600 meters.

The break hits the foot of the climb to Lagos de Covadonga itself and it’s still more or less 14 minutes. Katusha have six men on the front of the peloton.
12 kms to go and Seeldrayers pushes the pace first in the break. Lagutin is the last pearl on the string, jersey flapping open as he scrabbles to stay in contact.

Antonio Piedra of Caja Rural jumps clear and there is no reaction once Pablo Lastras has failed to counter across. Surely it’s way, waaaaay too early to go solo on this climb?

Sky come to the head of the main field and lift the pace dramatically. Then all of a sudden it’s one-two-three-four-Contador! A line of SaxoBank-Tinkoff Bank riders ramp up the speed for their leader. It’s Sergio Paulinho battering along …

… the field is immediately in shreds and Froome is floundering.

SaxoBank send Navarro up the road, and Movistar’s Quintana tries to ride up to him. Sky’s Uran comes to the front of the favorites’ bunch to regularise the rhythm.

Piedra is just ploughing along by himself, and he’s pulling out a decent lead, but the battle for the overall is simmering a few kilometres below him. SaxoBank send Hernandez away now so Contador is looking for stepping stones to help him bound up the slopes.

Piedra is doing a great job and he’s 1’18” ahead as he hits the nastiest 15% section of the climb. The fans are screaming encouragement in his ear as he hauls himself through the boneyard … the notorious part of this ascent known as La Huesera.

SaxoBank’s tactic is looking intriguing: two men now in a quintet off the front, along with two Euskaltels. I wonder if Contador has been having a chat with Euskaltel? The climb is beautiful and terrible. It rears up and then throws in a couple of unheralded descents. The lush green countryside sets off the riders’ colors, the drops off the side of the road are precipitous.

The Anton group and the ‘main field’ gels again only for Movistar’s Quintana to zoom clear. The lone leader Piedra still has a minute with just over four kilometres to go. He grits his teeth as he steals a glance back and down on a sweeping right-hand bend.

Rabobank’s Gesink hits the front of the big group as it goes through La Huesera, and Froome is in big trouble, dead last in a string of Sky riders.

BANG! Valverde goes, Contador follows …. Rodriguez is there! Valverde looks grim-faced as he swings out and past Gorka Verdugo. Froome looks like he’s blown up in a challenge-damaging way. Valverde is now up to his team-mate Quintana, so … we’ve got the two Movistars, Rodriguez, Contador and Anton.

Two clicks to go for the swinging-shoulders of Antonio Piedra and a life-changing win is almost within his grasp.

NOW … Contador goes! Rodriguez is on him, but Valverde is clinging by his fingernails as this trio gets onto a little descent.

Red kite for Piedra and he knows the win is his. He zips up his jersey and cruises to the line … great ride. Four kilometres behind him, the overall battle is boiling up. 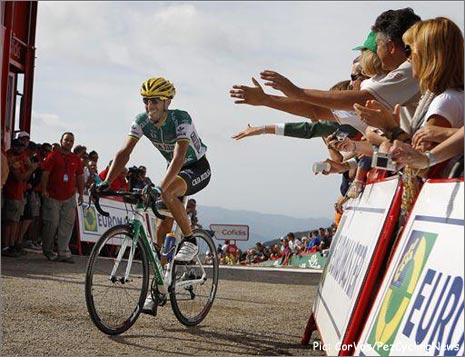 Piedra was today’s surprise winner after a strong final ascension that left his breakaway companions well behind.

Whoosh … Contador jumps again! Rodriguez waits for Quintana to close it down but then goes. It’s not quite as easy to get on terms this time for the race leader, but he’s there. 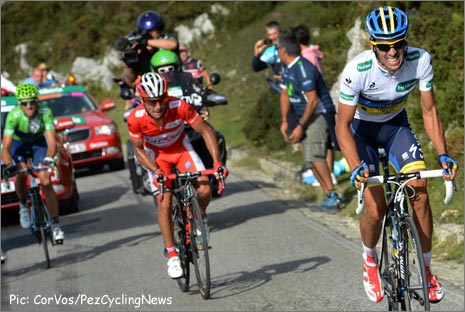 Contador tries again, and gets nowhere. The top two overall both take a swig of water as Quintana and Valverde get back.
Contador again, Rodriguez is on him as the road tilts up to 14%. Then Contador again! It’s relentless from Contador, but he can’t break Purito.

A couple of cows glance up as Quintana, Valverde, Rodriguez and Contador drop past them, skirting one of the Lagos on the last little descent before the final ramp.
Valverde drills it to the line and Rodriguez is content to sit on his wheel with Contador as they finish over nine minutes behind the ecstatic Piedra in his jaunty podium hat.

Can Contador finally make the difference tomorrow? It’s another monster in the mountains, so stay tuned to Pez for all the details!