Race Report: Throw some ramps of 22% in at the end of a 183 kilometre stage and you are bound the see some top action. Two riders stayed away to the finish at the top of the Cuitu Negru; Dario Cataldo won the hardest of stages, but “Purito” Rodriguez controlled Alberto Contador and showed him his rear wheel at the line. Froome faltered and Valverde concreted his place on the podium. Yet more excitement from La Vuelta.

This has to be the Queen stage of this year’s Vuelta a Espaсa, although the last two days could also have that distinction. 4,500 metres of climbing in the 183.5 kilometres from Gijуn to Valgrande-Pajares, Cuitu Negru. First climb is the Alto de Cabruсana 3rd Cat after 45,6 kms, then the 1st CAT Puerto de San Lorenzo (1350 meters) after 101 kms, then the 1st CAT Alto de la Cobertoria (1182 metres) with 41.8 kms to go and to finish, the frighteningly steep; above category Cuitu Negro which starts about 20 kilometres out and climbs to 1,850 metres with ramps of 22%. Let’s say it’s a tough stage!

Non-starter this morning was Cameron Meyer of Orica-GreenEdge, he is aiming at the World team time trial championships and will be joining his team mates in preparation.

The Early Action
There were the usual attempts to get an early break going, at one point the peloton was split with the Garmin-Sharp team on the wrong side. The race got back together before the first climb of the day for David Moncoutie (Cofidis) to take the points ahead of Javier Moreno (Movistar) and Gianni Meersman (Lotto Belisol).

Thomas de Gendt (Vacansoleil-DCM) and Dario Cataldo (Omega Pharma-Quick Step) headed up the road and soon had a gap of 11 minutes with 100 kilometres to go. Both riders are well down on GC, Cataldo at 1:05:19 and De Gendt at 1:11:12, so no worries for Rodriguez.

The Puerto de San Lorenzo
Second climb of the day; the Puerto de San Lorenzo and Thomas de Gendt and Dario Cataldo had 11:45 over the peloton at the base, by half way up, with less than 90 kilometres to go; they had stretched the lead to over 13 minutes. At the top their lead was up to 15 minutes as Saxo Bank-Tinkoff Bank had taken over the work of the half hearted chase.

KOM leader; Simon Clarke and Pieter Weening of GreenEdge broke away with David Moncoutie (Cofidis) to fight over mountains points with Clarke taking 3rd after De Gendt (1st) and Cataldo (2nd), Weening put himself between Clarke and Moncoutie.

In the valley before the climb of the Alto de la Cobertoria, Euskaltel-Euskadi began to aid the work of Saxo/Tinkoff although with 55 kilometres to go the lead was still just over 13 minutes.

The Alto de la Cobertoria
Thomas de Gendt and Dario Cataldo started the climb with a lead of 12:26 on the Euskaltel and Saxo led bunch with Clarke and Weening still sitting 1 minute ahead of the chase. Mikel Astarloza and Ruben Perez were the Euskaltel-Euskadi workers and they brought the lead back to 11:45 coming into the last 50 kilometres.

Before the top, Clarke and Weening were reeled in by the fast pace set by Euskaltel and Saxo Bank, Alejandro Valverde and race leader Joaquim Rodriguez were sitting further back in the group as was Chris Froome. Alberto Contador also gave up his place near the front to sit with Valverde and Rodriguez not far from the rear. Chris Froome looked to be in trouble in a tiny gear as his team mates were up the front. Some very strange tactics from the top four GC riders sitting at the back as their team riders rode away from them.

At the top of the Alto de la Cobertoria; De Gendt was first again, he and Cataldo had a lead of 7:30, and from here there was a fast drop to the valley floor before the start of the murderous climb to the summit finish on the Cuitu Negru.

Before the town of Campomanes for an intermediate sprint; Luis Mate (Cofidis) and Maxime Bouet (Ag2r-La Mondiale) rode away from the peloton to be joined by Linus Gerdemann & Jan Bakelants (RadioShack-Nissan), Omega Pharma – Quick-Step’s Kevin de Weert and Andrey Zeits (Astana), they soon have a lead of 45 seconds

The Valgrande-Pajares, Cuitu Negru
The pace picked up in the peloton with Saxo and Euskaltel on the front, next was Froome with Sky and then Katusha/Rodriguez and Movistar/Valverde. The attempted break of six was caught as the final climb hove into view ahead of the race.

With a gruelling 15 kilometres to come, De Gendt and Cataldo had 7 minutes in hand. Alberto Contador had four team mates with him at the front; Valverde was on his wheel two Movistar riders at his side. Rodriguez was followed by two Katusha’s as Froome was near the back with Henao; the GC group looked to be around 25 riders. Andrew Talansky of Garmin-Sharp could be seen close to the action. 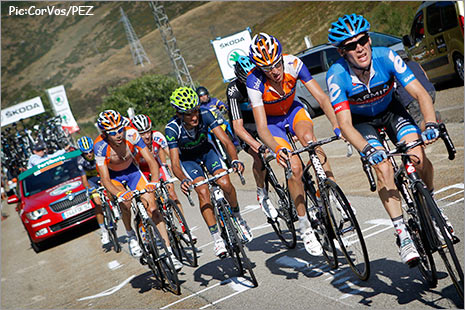 It was a hard, hard day for everyone, but the pressure was especially massive on the GC hopes like Andrew Talansky, Chris Froome, Laurens Ten Dam, and Robert Gesink.

The first attack came from Nairo Quintana (Movistar), but it must have been just a test as he didn’t get any sort of lead. Igor Anton had planned on a good day today. But he was hanging on the back of the group which was now 16 riders. Nico Roche (Ag2r-La Mondiale) and Rodriguez’s right-hand man; Dani Moreno was missing.

10 kilometres remaining and the lead was only 5:50, which was about a kilometre on the road. Moreno was being towed back to the group by Menchov with Roche hitching a lift, now giving us 20 chasing.

The gradient (8%) was still steady on a wide road; Contador had two pilot fish at the head while Nico Roche couldn’t hold on at the back. As the crowd started to thicken, the road kicked up to 13% as the leaders came to the church with 6 kilometres to go.

Cataldo managed to pull clear of the tenacious De Gendt in the final kilometer…which took approximately four days to complete.

The chase group split, Contador, Rodriguez, Valverde and Quintana sat on the wheel of Saxo’s Bruno Pires. Contador jumped and we had the top three together (with Quintana). Contador had a quick look behind and put the pressure on to lose the two Movistar men.

Quintana did a great job for Valverde, pulling him back to Contador and Rodriguez, the group of Froome had been distanced and were at 45 seconds with 3 K’s to the top. Valverde moved ahead, but the others didn’t chase and he was soon back with them. The road narrowed and visibly steepened as the De Gendt and Cataldo started the last 2 kilometres with its 22% ramps. 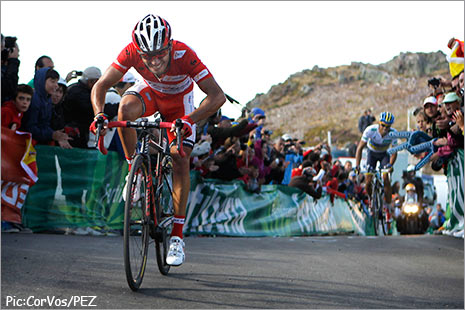 Yet again, Rodriguez had more than enough to follow and, in the end, answer Contador and take a few more seconds.

Cataldo was keen for the stage and attacked, as lower down Contador pushed a little harder on the pedals, nothing serious and then in to a section of 20% Quintana attacked, it didn’t last long and Contador closed him down and the three spat him out, followed by Valverde.

Less than 2 K’s for Contador and Rodriguez and they were riding up a 22% slope, Rodriguez matched every pedal stroke of the man from Pinto. Again Contador pressed harder, out of the saddle with Rodriguez comfortably sat in the saddle following the only wheel he need. The two rode side by side, the gradient wouldn’t allow any other action. Valverde struggled back up the other two. 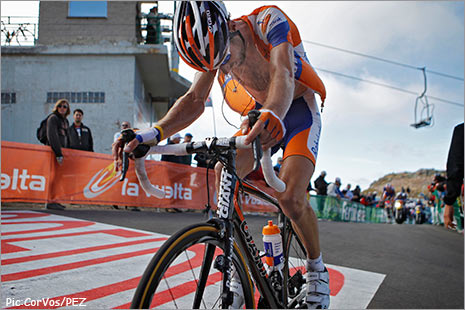 Cataldo pushed himself to the limit to take the stage 10 seconds ahead of De Gendt and collapsed over the line. Before the steepest (500 metres) section Contador attacks to drop Valverde, Purito was on him in a flash and led Alberto to the line and even put distance between them, Valverde next. Chris Froome lost minutes and any chance of the podium and needs to watch his back from the others.

Another marvellous day in Spain, a spectacularly hard finish to a block of three mountainous stages, with steep summit finishes the riders are forced to show what they are made of and today just proved it.

Stay PEZ all the way to Madrid.