Race Report: Stage 18 needed the photo finish camera to separate Ben Swift and stage winner Daniele Bennati at the line in Valladolid. The Italian denied the Englishman his first Vuelta stage win by the width of his front tyre. Bennati was just too swift for Swift!

The Start
At the sign-on podium in Aguilar de Campo, the new race leader; Alberto Contador was seen to give his good friend Paolo Tiralongo a big hug, Tiralongo helped Contador yesterday when he put in his decisive attack. The weather was again warm at 22єC, but nothing like the first weeks of temperatures in the 40’s.

The first break went from the line and eventually consolidated a good lead of nearly 5 minutes with 175 kilometres remaining to the finish in Valladolid. The five were: Luis Angel Mate (Cofidis), Martijn Keizer (Vacansoleil-DCM), Gatis Smukulis (Katusha), Gustavo Cesar (Andalucнa) and Brent Bookwalter (BMC), behind them the peloton was being controlled by the Argos-Shimano team who will be expecting a sprint win for their man John Degenkolb on this fairly flat stage. The sprinter do stand a chance of a bunch finish today and Friday, Saturday is the summit finish on the Bola del Mundo and then there is the circuit finish in Madrid on Sunday which will suit the fast finishers. 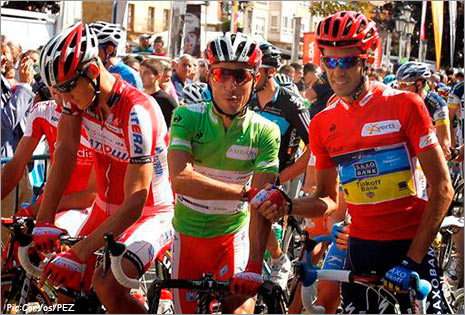 Was it only yesterday that THAT happened?

The parcours of the stage is not flat, but lumpy would described it, although the whole stage is run off between 695 and 900 metres altitude, luckily there was no wind today as this area is so open any wind can be dangerous.

RadioShack-Nissan also came to the front for their sprinter Daniele Bennati, the lead was hovering around 4:40 as the temperature had warmed up to 27єC as they still had 155 kilometres to ride. At the end of the first hour the speed had been 50.5 kph and the gap was the same.

Into the last 100 kilometres and the gap had come down to 3:45, but apart from that there was no change.

Through the feed, just outside Palencia, with 95 kilometres to go the gap was 4 minutes, within 10 kilometres they had lost one minute.

50 Kms to Go
There was nothing to report apart from a crash in the peloton going through some road works, worst off was Valverde’s Movistar right hand man in the mountains; Nairo Quintana and RadioShack-Nissan’s Linus Gerdemann. Quintana remounted, but Gerdemann had to abandon. Through Valladolid with a 40 kilometre lap to go, Gatis Smukulis (Katusha) won the first intermediate sprint from Brent Bookwalter (BMC).

The day’s break trundles down the lonely road.

25 kilometres out and the five escapees had less than a minute on the peloton, the break started to attack each others, first Martijn Keizer tried his luck, but he didn’t get very far. RadioShack-Nissan, Sky, Argos-Shimano and Liquigas-Cannondale had stated the chase proper in the peloton, the break were riding at 47 kph and the bunch at 53 kph, so their day was looking as good as over.

Into the last 20 kilometres and the hounds could see the rabbit up the road, this galvanised Keizer to go off again, but the race was all together at 17 K’s from the finish line. 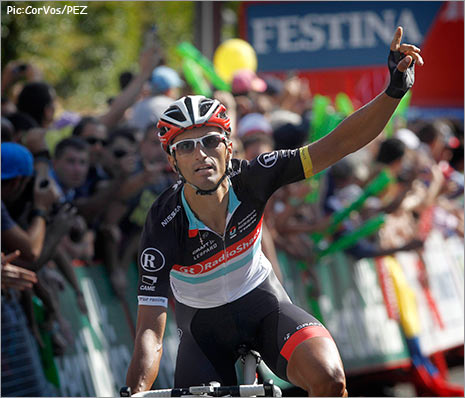 A happy day for Bennati and a chance to remember Wouter Weylandt – the last winner in Valladolid.

10 K
Under the 10K banner and Sky were on the front with Rabobank next in line, there was a split in the bunch with about 50 riders ahead, all the top men had made the split and through the second intermediate sprint in Zaratбn (6.5 kms out), Angel Viscioso (Katusha) was first making sure Joaquim Rodriguez’s points lead was safe.

The race entered Valladolid with 2 kilometres to ride and Sky were swamped by Orica-GreenEdge and Liquigas-Cannondale. Ian Stannard hit the front for Sky sprinter Ben Swift, Daniele Bennati (RadioShack-Nissan) was on his wheel as John Degenkolb (Argos-Shimano) was too far back and had to fight to get near the front.

Allan Davis (Orica-GreenEdge) and Lloyd Mondoroy (Ag2r-La Mondiale) booth took a flyer, but it looked like Swift had it in the bag with his perfect lead out. Bennati played the waiting game and thrust his bike out at the very last second and the judges had to go to the photo finish equipment to separate the Italian from the Englishman. 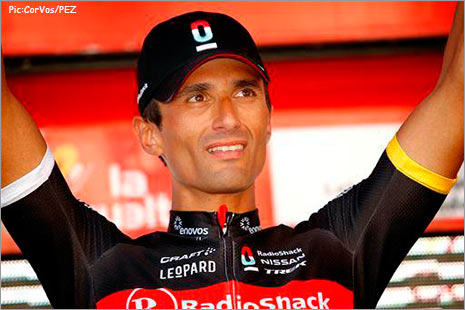 The stage win went to Daniele Bennati to give him his first win of the season.

No changes to any of the jerseys and tomorrow could be another stage for the sprinters before the last battle of laVuelta on the Bola del Mundo on Saturday. Keep it tuned to PEZ.