Race report: After last night’s crash-filled, over-heated, misdirectional Team Time Trial chaos, it was a chance to have as close to a gentle ease into the Vuelta proper as was possible. 181 kilometers from Pamplona to Viana, albeit in blast furnace conditions, looping schizophrenically westwards. It’s pretty flat, though – by 2012 Vuelta standards – and a sprint is on the menu.

Off-and-racing as the temperature soars are grand tour newcomer Javier Chacon from the Andalucia squad, Caja Rural’s Javier Aramendia and breakaway regular Mikhail Ignatyev of Katusha. The peloton just lets them get on with it.

Movistar keep an eye on things as the lead gradually stretches until it’s gently nuzzling five minutes. There’s one categorised climb today, which means a bit of a bun-fight for the points and the first aesthetically questionable climber’s jersey of the Vuelta. The overall leader’s red jersey is to the fore as Jonathan Castroviejo is proudly doing his job at the head of affairs.

The Alto de la Chapela sits at 75 kms and Aramendia is first up to take the points … or so he thinks. Apparently, he’s breached some rules on the way up and so Chacon gets the lead in the king of the mountains for now.

Ignatiev’s already rolled through the first intermediate sprint of the day so isn’t too bothered by the climb. He’s got a stage win in mind. 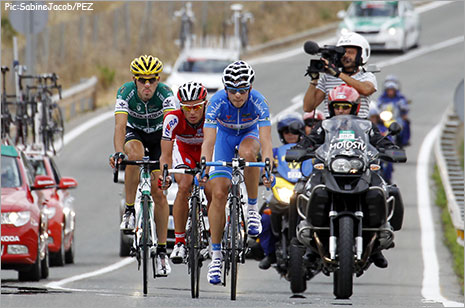 The peloton is allowing the lead to boomerang a little back towards three minutes, then down to two-and-a-half, then out again.

The escape artists are painting a neat picture, sweeping along and holding a decent lead. Lastras, a Vuelta stage winner and overall leader in 2012, is now putting in big turns dragging the peloton.

Inside thirty clicks to race: Ignatyev and Aramendia drop Cachon, as the field hauls itself into shape for the drive to the line.

Twelve to go and the leading duo surrender as Sky whip the peloton along. Katusha are up there, and SaxoBank-Tinkoff Bank are keeping Contador out of trouble. The speed ramps up to 59kms/h, and now it’s OmegaPharma-QuickStep on the front.

Inside six kilometres to go, and as the road starts to pitch and roll, Vacansoleil’s Uzbekistani rider Sergey Lagutin has a bash. Argos-Shimano turn the flank of the peloton white, as they try to position John Degenkolb for the sprint. 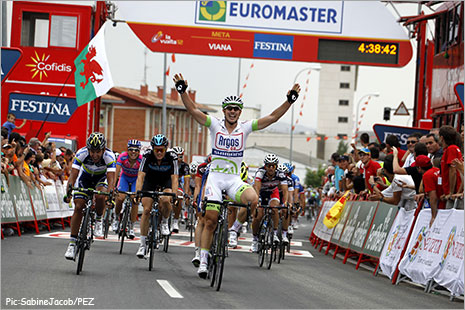 Four kilometres to go and Lagutin is hanging on by his fingernails – they’re about four seconds long, and then the peloton snips them off.

Now, Orica-GreenEdge are on the front, with Daniel Teklahaymanot hauling it along. The road to Viana is now bullet-trace straight with a huge church looming on the skyline, rolling down and then climbing to the line.

Red kite, one click to race, still Orica-GreenEdge with Argos-Shimano in their slipstream. The sprint is a bit wild and woolly as Sky’s Ben Swift goes from 250 meters out, fighting with Allan Davis from Orica-GreenEdge. Elia Viviani is trying to muscle his way into the frame … 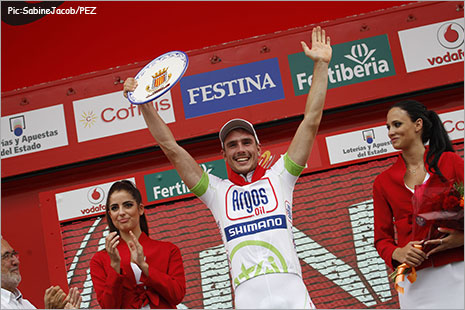 … but John Degenkolb suddenly manifests on the front, about twenty-five metres from the line, and takes the stage. Super job from Argos-Shimano. A stage win in the bag on day two and the pressure is off.

To prove that the Vuelta ain’t no Tour or Giro, we’re climbing tomorrow … already! A ‘summit’ finish on the Arrate which looms over the destination town of Eibar. It should be a good one, so don’t touch that dial. Keep it Pez!