Race report: The overall classification of the 2012 Vuelta a Espaсa is signed, sealed and delivered to Seсor A. Contador Velasco. Just a month after coming off his ban, El Pistolero is back on top. But the big question is just how many Grand Tours has he won? Bertie clearly held up seven fingers as he crossed the line …

Depending on whether you’re a fan or not, Contador now has two Tours de France, a Giro, and two Vuelta titles on his resume. Bertie clearly still reckons he won the 2010 Tour de France and last year’s Giro, though!

The last stage of the season’s last Grand Tour started at a particularly leisurely pace and continued like that for about half the stage. There were congratulations for Bertie, commiserations for Purito, and a lovely gesture in that the field sent David Moncoutie and Grischa Niermann off the front for a farewell parade.

Moncoutie tried to add to his four stage wins and four mountains titles at the Vuelta over the last few weeks, but can hang up his wheels with a healthy palmares, a clean conscience and a blemish-free reputation … which is more than the majority of his contemporaries might be able to enjoy.

Grischa Niermann has been one of the pelotons most unsung, yet most respected and valued domestiques. With only one win (a Regio-Tour stage in 2008) in the last twelve years, he’s devoted himself to others. He’ll carry on with that as he’s heading for a coaching role with the Rabobank juniors, and best wishes to him in his new career. 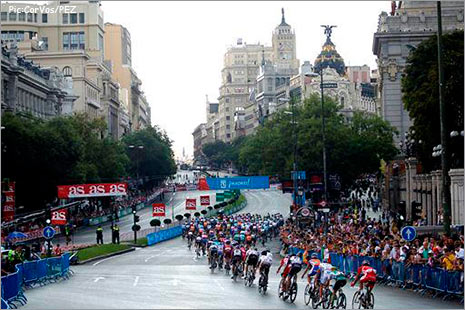 The pair of them coasted through the first intermediate sprint with 57kms to race as the field entered Madrid … at long last, after a very tough (and hot) Vuelta. It’ll be ten laps of a circuit, 5.7 kilometers long, so lots of opportunities for the fans to cheer home an all-Spanish top three.

Just moments later, a six-man break sweeps clear: Astana’s Kevin Seeldrayers is away again after his efforts on the slog to Bola del Mundo yesterday.

So, too, is Uzbek Sergey Lagutin (Vacansoleil-DCM), Francisco Javier Aramendia (Caja Rural), the Andalucia pairing of Javier Chacon and Sergio Carrasco, and another man returning from a brush with the sport’s anti-doping authorities – Mikel Astarloza.

SaxoBank – Tinkoff Bank are keeping a very close eye on things at the front of the field as the break ekes out its advantage. Lagutin and his co-conspirators hoover up the final intermediate sprint points, so after his heart-break in 2011 (thanks to Bauke Mollema), Joaquim Rodriguez just needs to keep tabs on Valverde in the final dash to the line.

The break hovers just ahead of the main field, and the advantage is of no real consequence. Argos-Shimano are looking for a fifth stage win with John Degenkolb so they come to the front of the peloton and pick the pace up. 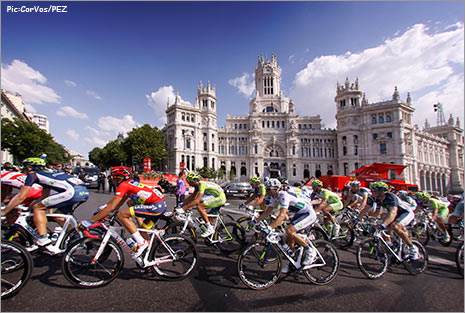 Nine kilometres to go and the break has twenty seconds, and Sky send their black-clad hordes to the front to work for Ben Swift.

Finally, the break is chewed down but Lagutin hangs on alone, but they’re right behind him as he takes the bell for the last lap. Sky and Rabobank motor past the Uzbek as the field concertinas to a near-halt at a 180° bend. 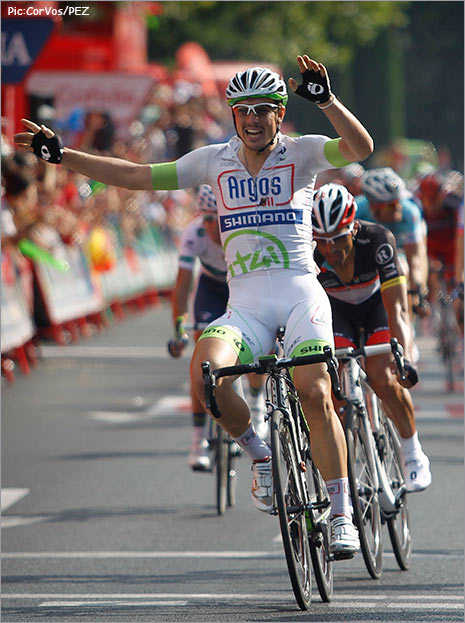 The field bunches as the speed drops a touch. Katusha have the left of the road as they try to position Rodriguez to steal a point or two to seal that points classification.

Sky are pulled through by Ian Stannard. Ag2r are up there, too, for Lloyd Mondory.

Now it’s all lime-green as Liquigas-Cannondale hit the front for Elia Viviani. Argos-Shimano are coming through now, Orica-GreenEdge, too, as the field snakes under the red kite.

Koen de Kort does a monster turn into the last 500 meters and Degenkolb finishes it off, just edging Bennati and Viviani.

More heart-break for Rodriguez … yep, Valverde put everything into the sprint and came sixth, swiping the points classification on the line.

Behind, Contador crosses the line flanked by his team-mates … one of the first to congratulate him is his pal Paolo Tiralongo. 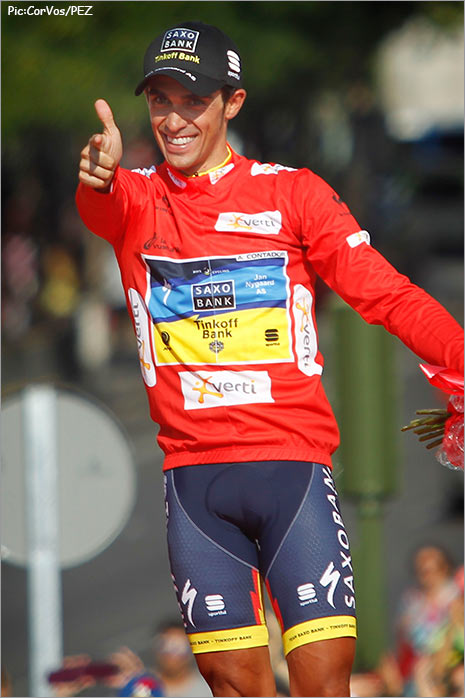 Congratulations to all the riders who illuminated and survived such a brutal Grand Tour. Regardless of your feelings on them, the spectacle was terrific, especially the epic battles through the mountains and Contador’s dramatic race-winning tactical coup.

Big congrats to Pez interviewee Simon Clarke on his win in the mountains classification.

Thanks for following the Vuelta with Pez … more to come, not least all the feedback on Contador’s win in tomorrow’s Eurotrash. Keep it Pez!