Race Report: The last 5 kilometres of today’s stage up the slopes of the Alto de Arrate showed what real racing can be like when you have riders who are not scared to attack. Alberto Contador stamped his authority on the climb; Valverde, Rodriguez and Froome were his match. Valverde for the stage and overall, the others on his wheel. Top excitement from La Vuelta…bring it on!

It may only be the second “proper” stage, but stage 3 from Faustino V to Eibar (Alto de Arrate) makes up in hardness what it loses in length. The 155.3 kilometres include the climbs of the Alto la Aldea (2nd CAT), Puerto de Vitoria (3rd CAT), Puerto de Campazar (3rd CAT) and the summit finish on the 1st CAT Alto de Arrate. The Arrate starts 5.5 kilometres before the finish line, but kicks up at 7.8% for 430 metres with sections of 11%.

The First Attack
Andrey Zeits (Astana), Pim Ligthart (Vacansoleil-DCM), Philippe Gilbert (BMC), Christophe Riblon (Ag2r-La Mondiale), Dominique Rollin (FDJ-BigMat), Sergio Carrasco (Andalucia), Nico Sijmens (Cofidis) and Markel Irizar (RadioShack-Nissan) grouped ahead of the peloton to build up a lead of just over 3 minutes after the first hour. BMC’s Philippe Gilbert at this point was the “virtual” overall leader, but Movistar were keeping the eight up front at a manageable distance. 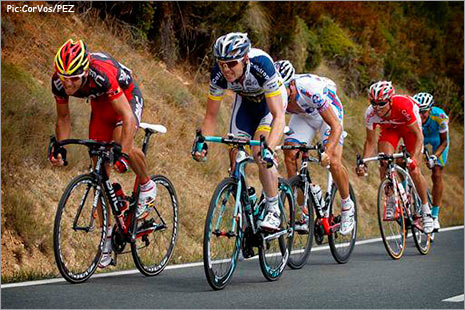 Over the top of the Alto la Aldea; Pim Ligthart was first in front of Philippe Gilbert and Andrey Zeits as the bunch split behind, to regroup on the descent, it was far too early in the race to be dropped. It was the same result on the Puerto de Vitoria with 88 kilometres to go; Ligthart took more points towards the KOM jersey which he obviously wanted this afternoon. The gap at this point had gone to 4 minutes.

Movistar were working to hold the break to around 2 minutes as the race came into its last 50 kilometres, the red jersey wearing Jonathan Castroviejo had said he wasn’t expecting to hold the lead at the end of the day as his climbing is not up to the difficulty of today’s stage finish. The red jersey was seen at the head of the chasing peloton on occasions, so the Movistar team must be expecting either Alejandro Valverde or last year’s Vuelta winner Juan Jose Cobo to take over.

On the climb of the Puerto de Campazar the pace was steady in the peloton as the lead grew to 2:37, Ligthart was first again with Nico Sijmens second and Philippe Gilbert in third, this gave Ligthart 11 points, but the final climb carries 10 points, so he could be safe in the jersey. 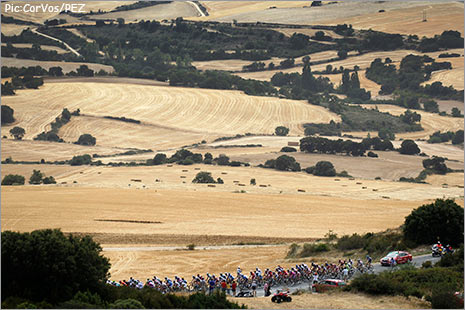 25 Kilometres To Go
The lead was being held at 2:15 by Movistar, most of the work being done by Pablo Lastras, while at the rear of the bunch Garmin-Sharp’s Peterson and Kreder were able to have a chat. Dominique Rollin took the sprint at Zaldibar as the bunch started to warm up with Rabobank and then Sky taking to the front.

Andrey Zeits (Astana) was not happy with Dominique Rollin and put in a big effort to see him off, this also rattled Ligthart and Sijmens was struggling as they came towards the last 14 kilometres. Omega Pharma – Quick-Step put Tony Martin on the front and then Sky took over again for some very fast work through Eibar. The break was caught with 8 kilometres to go with Markel Irizar of RadioShack-Nissan being the last one.

Saxo/Tinkoff came to the front with Rafa Majka blowing the race to pieces with Contador in his wheel, Froome, Moreno, Rodriguez and Roche were all in attendance as the race hit the foothills of the Arrieta.

5 K’s to the Summit
Castroviejo was distanced before the very steep section, as at the front there was only around 25 to 30 riders in contention, the first attack came from Alejandro Valverde, Contador came up to him, Rodriguez and Froome were with him, but they were just testing the water. As the others came back, Contador was away under the 3K banner, again Rodriguez was there but Sky had to bring Rigoberto Uran up to the front to keep the race together.

Contador was keen for this stage win and put in his third big attack, Rodriguez held him as did Valverde, Roche and Anton. A fourth attack from Contador did the damage to many, Valverde, Rodriguez and (slightly slower) Froome kept with him. 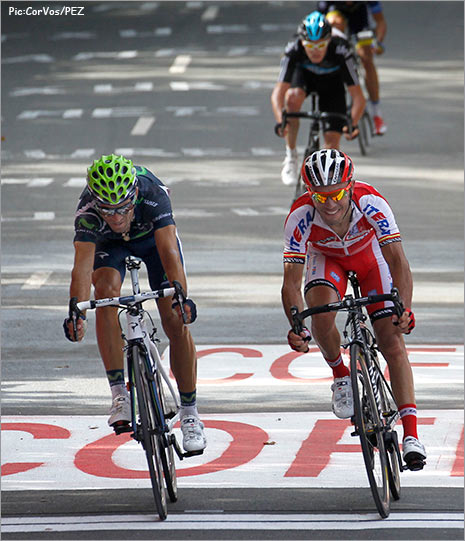 These four were going to stay out to the finish and Contador had the race by the teeth with attacks on the flat and on the downhill to the finish. Rodriguez pushed past Contador in the last 500 metres taking Valverde with him, putting a small gap on Contador and Froome. The two launched down on the line and Rodriguez thought he had won, but Valverde had it by a millimetre with Froome and Contador just behind.

Alberto Contador made at least six attacks which Rodriguez and Valverde were able to counter immediately, Froome was a little slower, but always managed to contain the Spanish onslaught. 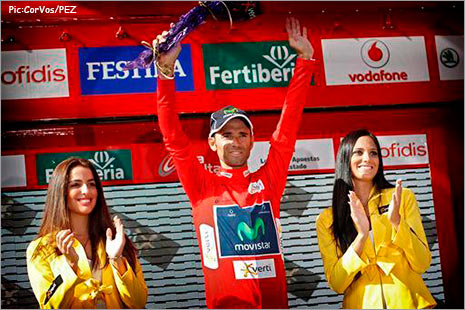 Alejandro Valverde won the stage and will be wearing the red jersey tonight; the GC now looks more like a final result than the 3rd stage. Today was a good guide to who will be on the top steps in Madrid, but there were quite a few who lost time today.

Keep it PEZ for more of the same. ЎHasta maсana!