Race report: Aah, the Twitterati will have plenty to say tonight as Alejandro Valverde gets a bit of a battering from his contemporaries. He hits the tarmac in a crash and his rivals waste no time in flooring it to put the race leader in big trouble. Up front, it’s a dream debut win for one young Aussie …

Back to the beginning …: The break goes instantly today, and in this heat the peloton are pretty damn happy about that. Movistar could care less about the gap going out. They half-heartedly pedal along, waiting for help from the other teams. But no-one steps up, and the gap goes out … and out … and out some more.

They trundle clear as the race heads out of the Basque Country and makes for Rioja, which puts me in mind of a nice glass or two rather than a bidon or twelve on another scorching hot day. 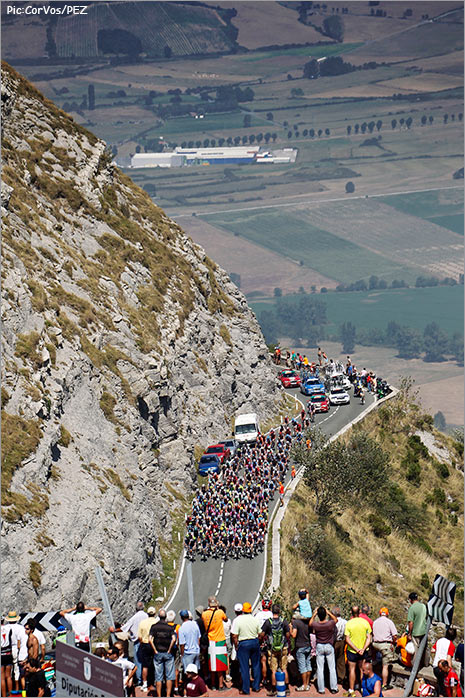 The front five have a comfy eleven minutes or so as they crest the Puerto de Orduсa at 52kms then drop down towards the town of Osma. Mate is first over the top, by the way.

It’s then pretty much flat along the plateau to the foot of the last climb up to the Valdezcaray ski station. It’s steep at the bottom, around 9%, and then just eases off with every passing kilometer, giving an overall average of about 5%.

It’s not too far off the quarter-hour as the field enters the last 40kms of the stage. The quintet still rolling along nicely, with hopes of plenty time for the thrust and parry of a stage-winning bid on the last climb.

It’s all fairly routine until the wind starts to pick up. Sky want Froome out of trouble so as they hit the front … BANG! A big pile-up, and Movistar’s race leader Alejandro Valverde is right at the bottom of it.

Now, Movistar haven’t made themselves too popular this year with some ethically questionable racing moves when rivals are in trouble. So, today, it’s payback and there are no shortage of teams ready to stick the knife in.

Sky, with help from BMC and SaxoBank-Tinkoff Bank, rip along at the front of the field. Ian Stannard’s British national champion’s jersey is to the fore. Movistar are scrambling frantically to get back in touch, but they’re burning their men left, right and center.

As a consequence, the gap to the front five plummets. Katusha commit men at the front with Sky now. The peloton splits dramatically and there are groups everywhere. The wind isn’t helping matters either.

Twenty clicks to race, and Valverde’s boys have pulled a couple of groups together and hauled themselves within forty seconds of the other top guys (Contador, Froome, Roche, et al.).

Sixteen kilometres left and the gap to the five leaders is now under seven minutes. But now Mate is gone, then Rosendo … and then Bazayez is popped.

Up front, the last thing Valverde needs … Navarro attacks for SaxoBank-Tinkoff Bank, chasing Velasco of Euskaltel and Zeits of Astana is there, too. Then Froome, Contador and Roche come through.

Martin and Clarke still lead, unconcerned about what’s happening behind. They go through nine kilometres to ride … the main field is 3’16” back as they come through ten kilometres to race.

Froome and Contador trade turns and a bit of chatter before sitting up as a small, select group comes back together.

Valverde has no team-mates left and is tormenting every fibre of his being to get back in touch. He can more or less see the back end of the favorites’ group, but then he starts to slip backwards …

Tony Martin and Simon Clarke are still clear, inside four kilometres to ride. Valverde looks a bit like he’s chucked it now, having had no help to close the gap. 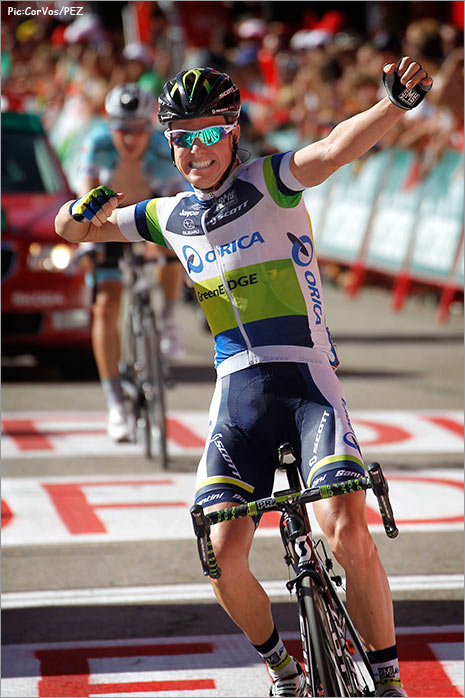 Denis Menchov and Javi Moreno are now setting the pace for Katusha, and Gesink is sitting close to the front, but Euskaltel’s Igor Anton is dropped now.

Two to go now and Clarke is sitting on Tony Martin’s wheel, waiting for the biggest chance of his career. The climb is flattening out now. Martin is battering along, his maillot flapping in the wind as though he’s hanging out of a car.

Martin leads to the red kite then jumps, but Clarke is on him. The Aussie lets the German do the work as they roll towards the line. Martin winds up the sprint, but Clarke zips past to take a straightforward sprint!

It’s a hell of a way to take your first professional win … take a bow, Simon Clarke. 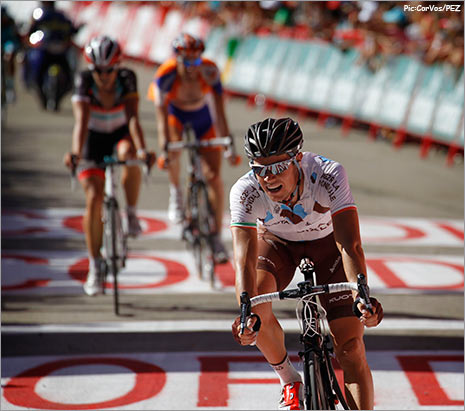 Bazayev hangs on for third and there’s an unfortunate ‘celebration’ from Marcos Garcia who mistakenly thinks today is his day.

The big names come in together at 1’04” except for Valverde who is in a big group just under two minutes back, the leader’s jersey gone. Did he get his just desserts, or was he taken advantage of? Dear reader, what do you think? 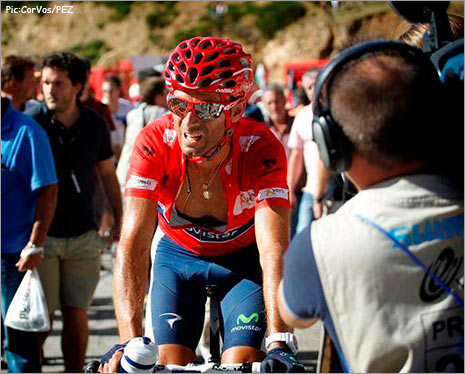 More to come tomorrow on the road to Logroсo … Don’t touch that dial!