It was hot and fast in Spain today but neither a four man break nor some great work by the other sprinter’s teams could stop John Degenkolb speeding to victory on the MotorLand Aragon racing circuit. Three sprints and three victories for Argos-Shimano in Spain. Why didn’t Degenkolb go to the Tour?

Today’s 164km stage 7 from Huesca to Alcaсiz – Motorland Aragуn in Northeastern Spain was a day that was clearly pre-scheduled for the big horsepower sprinters with little or no climbing involved. The organizers then made an easy day even easier for the sprinters by placing the finish line on the MotorLand Aragуn racing circuit meaning that there would be big, smooth and wide roads for the finish so that there would be no road furniture or roundabouts to upset any sprint trains in place.

Despite the day being seemingly guaranteed for the sprinters there were still some riders happy to head out on a long useless day in the heat on the attack with a four-man group going clear after just 2 kilometres. The lucky or unlucky four who committed themselves to some serious team time trial practice in the sun were Pablo Lechuga Rodriguez (Andalucia), Javier Francisco Aramendia Lorente (Caja Rural), Frantisek Rabon (Omega Pharma-QuickStep) and Bertjan Lindeman (Vacansoleil). With none of the four being any threat to the red jersey of Rodriguez, Katusha were happy to let the break go and the impetus for the chase was put on Argos-Shimano who were hoping to make it three sprint victories from three for their in-form man, John Degenkolb.

After just 20 kilometres the break already had over four minutes advantage but Argos-Shimano weren’t going to let them get much further than this during the entire stage and both the four riders out the front and the Argos riders in the peloton were in for a hot ride in the 38° (100 F) sun swapping off turns as the other riders settled in for a relative rolling rest day after a hectic first week in the Vuelta.

The four up the front were doing anything but resting though, consistently sharing their efforts together until 40kms before the finish where the two WorldTour riders seemed to think that their Spanish counterparts were not doing enough work. The attacking of each other in this group then started with Rodriguez (Andalucia) getting dropped with 30kms remaining and Lindeman and Rabon seemingly intent on getting rid of the last man on GC in the race, Aramendia Lorente from the group also. For some reason these two were riding like the finish line was 3km down the road and not 30km as the inter group attacking reached ridiculous levels and their already slender lead dropped to next to nothing.

These attacks and the subsequent lack of cohesion in the group brought the end to the group with 15kms remaining and the teams interested in the sprint took control. Team SKY for Ben Swift and RadioShack-Nissan for Bennati were doing most of the work and when the peloton finally hit the racing circuit finish it was all Team Sky. Sky’s horsepower and in particular the work of Brit Champ, Ian Stannard even split the front of the race at 2km remaining but some great work by Argos-Shimano saw them brought back and it was then Chris Froome who led out the sprint for Swift. 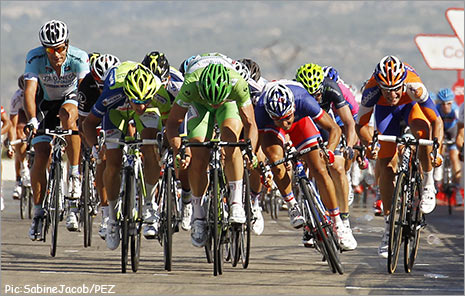 Now I’m not sure if that was in the plan book for Sky to have one of the skinniest climbers in the race as the final leadout man, but it certainly didn’t work in any case. Unfortunately for Swift he was swamped with 250m to go by a charging green buzz as green jersey Degenkolb came roaring past with a lime green Italian in Viviani stuck to his wheel. Viviani could do nothing against the speed of Degenkolb though, unable to come off the German’s wheel making it 3 from 3 for Argos-Shimano in this year’s sprints at the Vuelta. 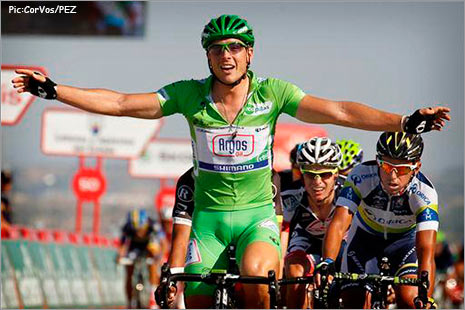 So except for a last minute leadout by Froome it was almost a rest day for the big favorites of this year’s race but that will all change tomorrow as we have a summit finish in Andorra. Can Rodriguez hold onto his slender lead? Keep it dialed to Pez to find out.

USAPC12 St.4: Jens Does The Business!