As winter approaches in the Northern Hemisphere the Vuelta may seem like just a distant memory to many but the memories are still fresh for our roadside reporter Ed Hood. Here’s his story from the last day of the Vuelta ’12; the day where Degenkolb won yet another stage and Contador yet another GrandTour.

We’re done. There’s always a void when a Grand tour finishes – we only worked the last two stages ‘live’ but we’d watched every stage on TV, read about the action and interviewed riders over the phone, so it’s a natural reaction to feel ’empty.’

But there are worse places in the world to go ‘cold turkey’ than Madrid.

Not far from the press room is Cafe Gijon, which we photographed on our stage 21 travels. It’s been a centre of Madrid’s literary life for a century. If you’re a well known writer or poet then you don’t pay the same sobering prices as the rest of us – I checked, but apparently my Steve Cummings interview doesn’t qualify me.

But it was nice to sit among the hardwood and history and ‘come down’ after the excitement of the day.

Tapas were next on the agenda – patatas bravas, ham croquets and tortilla, washed down with cool Mahou beer.

Madrid is lovely by night, they don’t worry about the electric bill and go mad with the flood lights – the effect is stunning. We had planned to hit the best bars with Al Hamilton; but he had to leave for the five hour drive back to Alicante – and we were fading fast.

But there’s one bar you have to visit when out for the evening in Madrid – Museo Chicote on the Gran Via. A Madrid institution, it’s changed little since the dark days of the Spanish Civil War when Ernest Hemingway was a regular. And the post-war era when film stars like Ava Gardner passed through those revolving doors. But the white tuniced waiters, who I remember from the late 80’s have gone.

They’ve been replaced by handsome young men in black shirts who use too much hair gel. But the place is still cool – and expensive.

On Monday morning we had our ham on fresh bread with a little olive oil, washed down with fresh orange juice and cafe con leche before we attacked the papers. And it was our first chance to study the Vuelta ‘Guia Stadistica 1935 to 2011’ which the organisers give you – if you ask.

All the stats are in there, up to the start of the 2012 edition of the race. Most wins belong to Tony Rominger (Switzerland) and Roberto Heras (Spain) both on three. Rominger, in 1994 is also one of only three men – the other two are Julian Berrendero in 1942 and Freddy Maertens in 1977 – to lead the race from start to finish.

Most days in the lead goes to another Swiss rider, Alex Zulle with 48 on his way to winning overall, twice – in 1996 and 1997. We can’t say in red, because the leader’s jersey used to be amarillo, then gold for a spell.

Of current riders – and including 2012 – Denis Menchov (Russia) and Alejandro Valverde (Spain) share 23 days of race leadership. Most stage wins is with Spain’s Delio Rodriguez Barros who between 1941 and 1947 won 39 stages. Of current names, Alessandro Petacchi (Italy) is second on the all time list with 20 stage wins between 2000 and 2010.

And despite Degenkolb’s excellent five stage wins, he’s a long ways down the table for stage wins in the same race. In 1977, Freddy Maertens (Belgium) won 13 stages, if you include the prologue and stages 11a and 11b.

And more recently, Laurent Jalabert (France) won seven in 1994 with Rominger taking six the same year. The most participations in the race is by Inigo Cuesta (Spain) on 17 between 1994 and 2010. Of current riders, Juan Manuel Garate (Spain) and Petacchi have started 11 times.

We headed south to the Gran Via and stopped at a street cafe to get or bearings as the 30’s Art Deco architecture towered over us. The Puerto del Sol was where we were headed, but the giant rooftop Tio Pepe sherry sign has been taken down whilst the building below is renovated – shame. 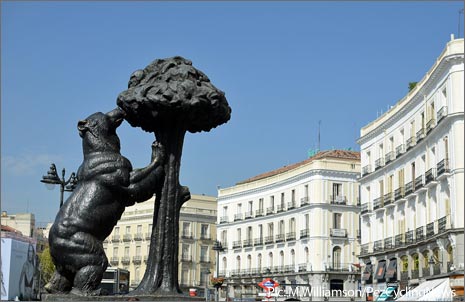 But the bear is still there, a 20 ton bronze statue of Madrid’s emblem picks strawberries from a tree as the tourists snap away. 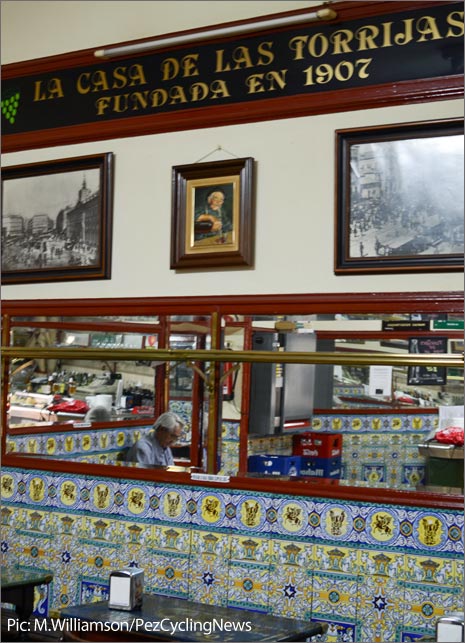 Just off Sol is the Casa de Torrijas serving Torrijas since 1905 and doing not a bad tortilla and cool Mahou, either.

Torrijas are bomb shaped deep fried creations, coated in sugar and filled with custard, served with sweet wine – if you have a sweet tooth, you’d kill for one. Our time in the Casa gave us more time to catch up with the sports papers.

Despite an all Spanish podium – for the first time since 2004, with Heras, Perez and Mancebo – football and motor sport dominate the front page of ‘AS.’ But the headline does tell us that 100,000 people watched the last stage in Madrid.

Whilst inside there are the inevitable last stage ‘Alberto and the boys drink champagne’ and ‘Purito and Alejandro read the papers,’ pix. Former harder than hard domestique and AS columnist, Juan Antonio Gonzalez Linares postulates it may have been the best Vuelta, ever.

In ‘Marca,’ the other major sports (there are four) Formula 1 and football, again dominate the front page.

But there’s a picture of Contador bowing his head in respect as he shakes hands with Rodriguez – we like that. And Marca gives us Valverde’s Vuelta stats; off seven starts, he has one abandon, a fifth, a fourth, a third, two seconds and a win – not a bad average.

The clock is starting to catch up with us though, and there’s just not enough time to visit the Reina Sofia Gallery and take in what is arguably the world’s most controversial painting – Guernica, by Picasso, the artist’s highly personal and brilliant anti-Fascist statement.

When I went to see it for the first time in the late 80’s it was under armed guard, behind bullet proof glass and a crazy old Fascist guy told you that your mother was a whore as you walked up the stairs to the gallery where the painting was on view.

Madrid is a city of art and design, there are statues of all shapes and sizes all over the city and even the lift shafts are cool.

There’s a Raphael exhibition running and an Edward Hopper show at the Thyssen Gallery; with posters around town to advertise the American painter’s everyday scenes from life in the ‘Land of the Free.’ 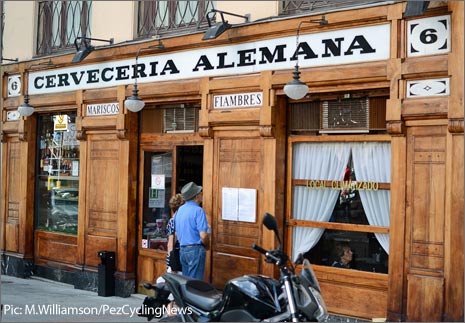 We just about had time for one more step in the footsteps of Mr. Hemingway – the Cerveceria Allemana in Plaza Santa Ana.

They’ve been serving cold German beer here for more than 100 years – and today was no exception.

Ernest’s table still waits for him, over by the window. He wrote about the winter tracks and the big motors; and always wanted to write about road racing – but sadly never did.

We’d left it too late to walk back to the car – but Madrid taxi drivers are so fast and fearless that the fares are never too sore. We’ll be in rainy Edinburgh for dinner – but I’d forgotten how much I love Madrid and the Vuelta.