Vuelta de PEZ: Not The Best Of Days!

Roadside St.7: I just couldn’t keep away from La Vuelta a Espaсa, the draw was just too much for me to fight, so plans were made and fuel was loaded in the tank and off I went to see what I was missing. Well, Stage 7 to Alcaсiz was maybe not the best, but how could I not go?

When the route of this year’s Vuelta a Espaсa was released, I didn’t think I would be able to go any stages due to the complete course being north of Madrid and nowhere near where I live. I had accepted that after ten Vuelta’s as an accredited journalist; 2012 was not going to be number eleven. Two things changed my mind though: first, I was watching the team presentation on TV, and I cracked and started to look at the map; then my mate Christian in Norway said “why don’t you go to Alcaсiz, its only three and a half hours.” That was it, I had to go. 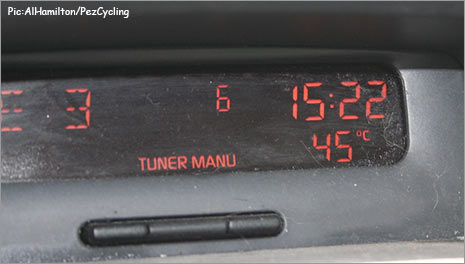 On reflection, the stage finish in Alcaсiz was probably not the best to have picked to placate my Vuelta withdrawal symptoms. First, the journey was nearer 5 hours (thanks Chris) and to say it was warm would not be telling the full story.

Nothing to see here

The race finish was not in the tone of Alcaсiz with its monumental church and its sky line dominated by the castle with its gothic murals. Yea, I read that in the brochure, there was no way you could see anything of that from the race finish, which was on the Motorland Aragon race circuit well out of town. 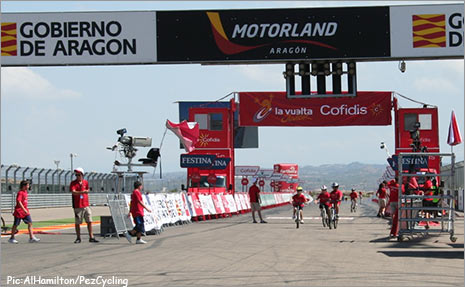 The Vuelta runs races for the kids before the stage finish on eleven of the days, where there is a circuit and after I received my creds that was the first thing I saw, all the kids are very keen as they get presented on the race podium, but how the judges know who’s won I‘ll never know, there was definitely some switching going on there. 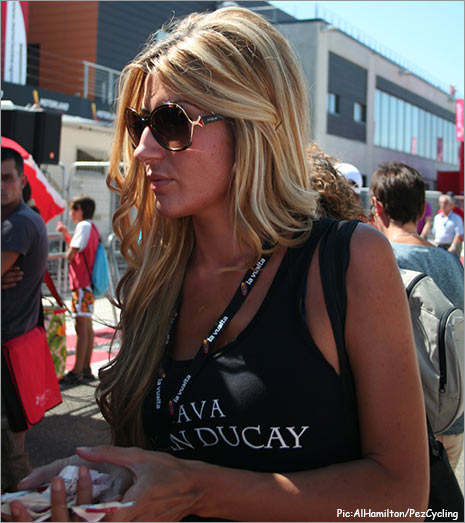 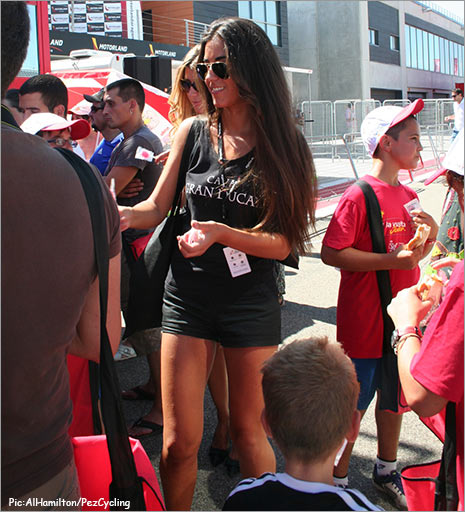 Time to see who was in the Sala de Prensa, first up was Laura Meseguer, you might remember her from previous Vuelta’s and we managed to interview her last year. She still writes for a Spanish cycling magazine; PedalierPro, but this year she is also grabbing riders for interview on EuroSport, keep your eyes open for that pleasure. 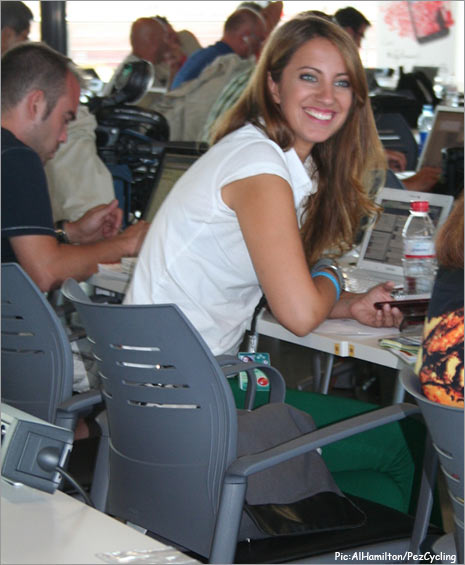 Next, it was a much unexpected pleasure to bump into Kenny Pryde who I had not seen for too many years. He has been a journalist and/or editor for just about every cycling magazine that is written in English, but bailed a few years ago, this is his comeback to Pro cycling. 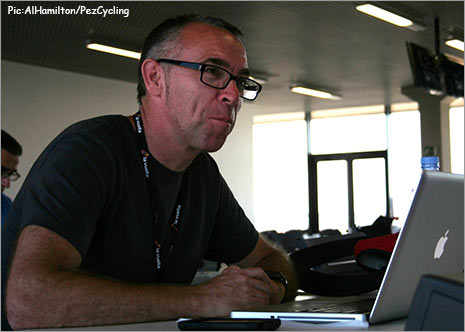 Of course we had to put the World to rights and of course a certain Mr. Armstrong cropped up in the conversation, but that conversation is not for here. Anyway welcome back Kenny. 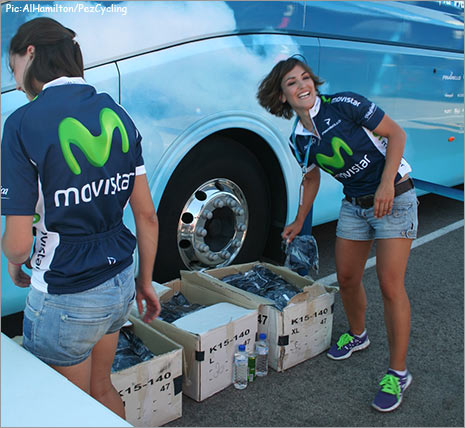 OK I’ll have a T shirt

The team busses had started to line up behind the pit-lane and the very nice girls from Movistar were handing out T shirts and hats, no discounts on mobile phone bills, but you can hope. 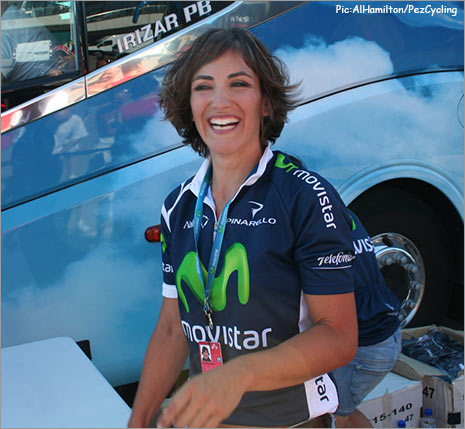 Happy at her work 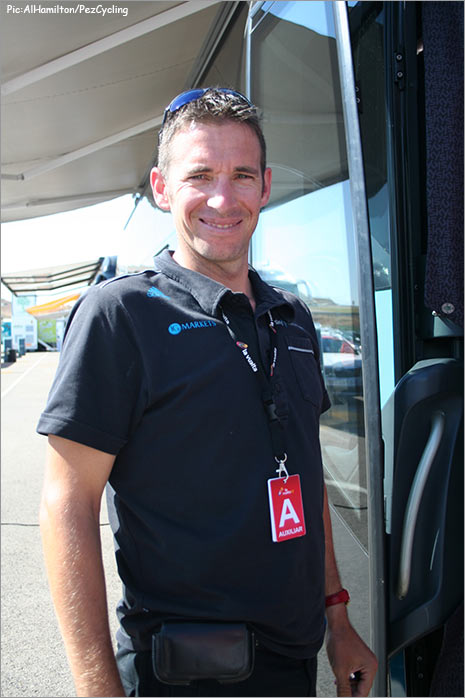 David Dario Cioni was at the Sky bus, as press officer he is always busy, so there was only time to make sure his olive trees were OK back home and I had to get to the finish line. 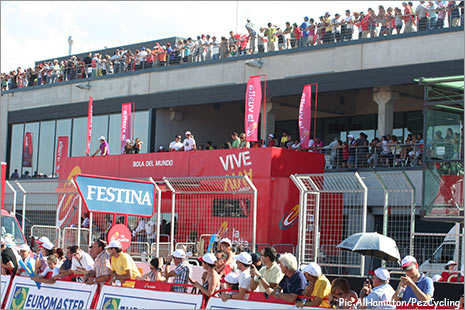 Time to watch some cycle racing: The fans had started to fill the stands, which was a strange feeling for a bike race where the spectators are pushing against the barriers for a split-second view of their hero, here the barrier was empty. I could just about stand any where I wanted for the finishing sprint. 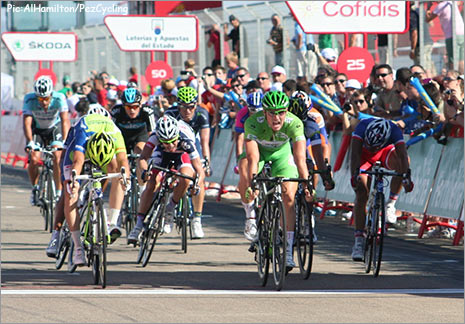 And it was that man John Degenkolb of Argos-Shimano taking his third stage win in this Vuelta. PEZ-pal, Bert-Jan Lindeman of Vacansoleil-DCM had been in the break and I was hoping for a win from the young Dutchman as he gave me a great interview earlier in the year, before he even turned a pedal in anger as a first year professional. 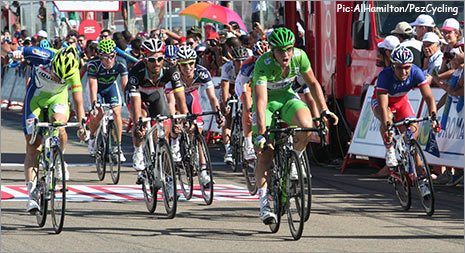 Degenkolb was very happy with his win, but it was so close with Viviani he had to wait till well after the line for his celebration. 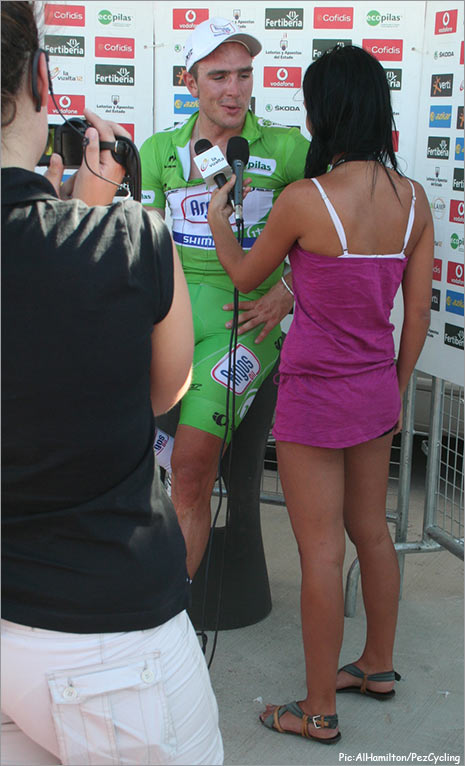 He also must have been very happy with his interviewers; first Ainara for La Vuelta and then Laura for EuroSport, the guy who works for Spanish TV station, TVE, just didn’t seem to get the same attention. 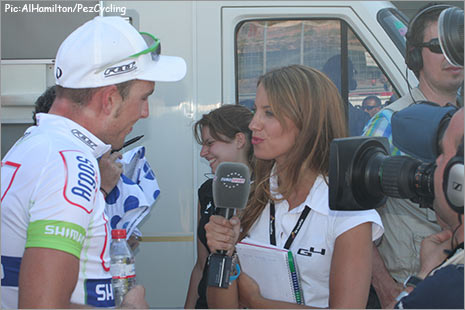 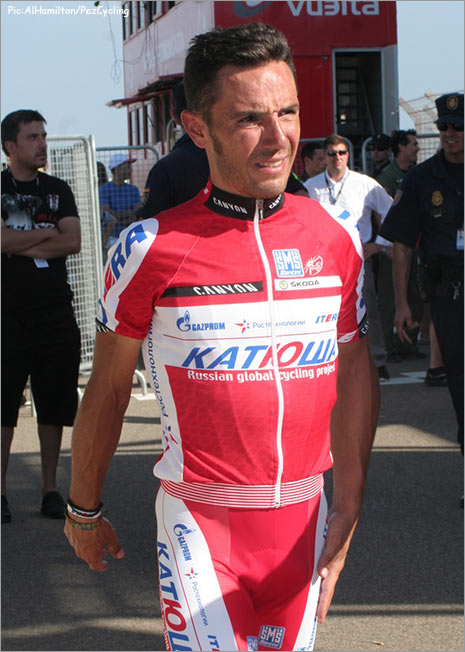 Overall leader; Joaquim Rodriguez made his way up to the podium on foot for his jersey’s as the stage winner has the fun of soaking the photographers with Cava. 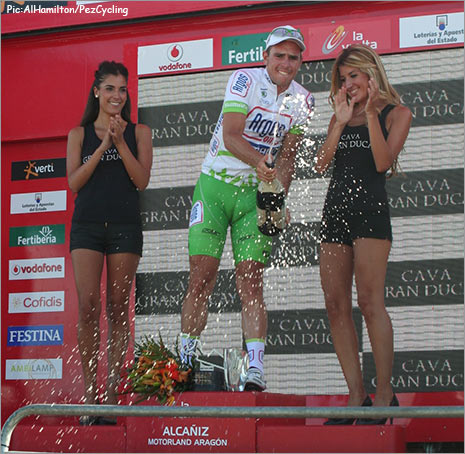 Rodriguez was also swamped with questions, but the man we could see was Alberto Contador. I know where he was by the large group of fans gathered round an unmarked car. 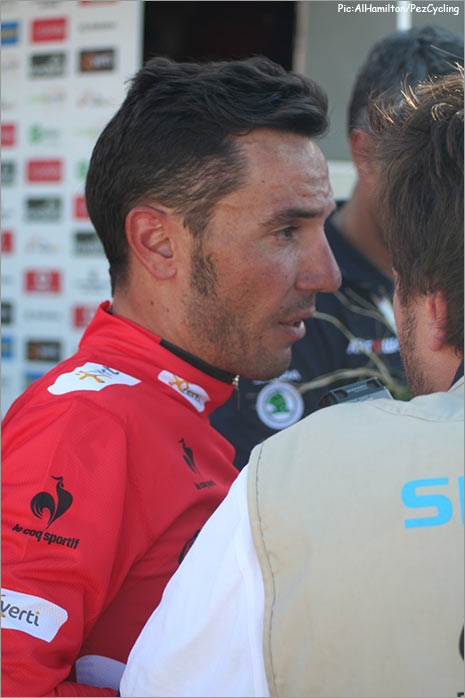 I think the plan was for him to make a quick escape to his hotel about 150 kilometres away in Lleida, it nearly worked! 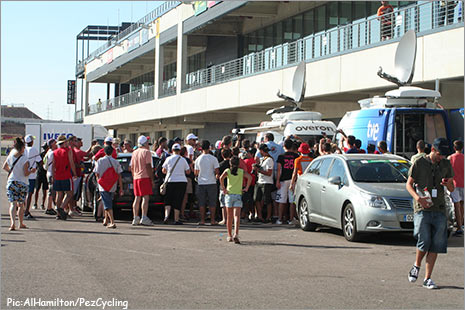 Alberto Contador is in there!

It was now time for me to find my “hotel” I use the word lightly, hostal is what it really is, the wi-fi wasn’t working and the old woman didn’t understand that sort of thing. The smell of over boiled cabbage permeated the walls and it didn’t look like there was anywhere to eat, but tomorrow is a new day and I’ll find that illusive internet signal.
Buenas noches.