Roadside St.8: After the less than best day at stage 7 in Alcaсiz, the start at Lleida was much more interesting, lots of riders to see and loads of old faces to meet up with. It was very hot again, but a great time at La Vuelta a Espaсa. This is how the day panned out…

If anyone fancies a holiday in a village whose main attraction is a fountain that smells like it’s using sewage water, is next to a large lake with drunk tourist fishermen spending the night on its shores probably not catching anything, and you like to sleep in a hotel that smells of boiled cabbage, has rooms that are smaller than a gerbil’s cage and dodgy internet, then I’ve got just the place for you. 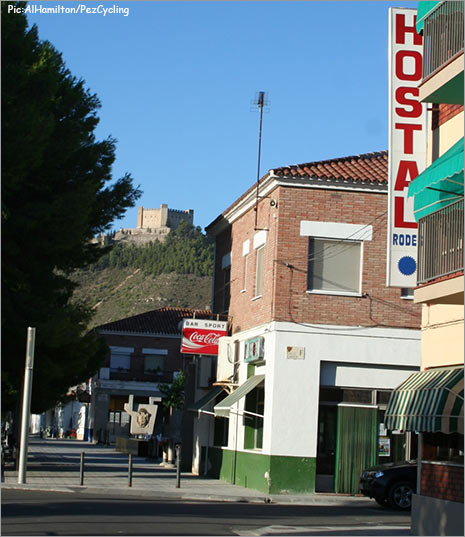 If you don’t like the sound of that then don’t go to the Hostal Rodes in Mequinenza. It does have a mining museum (closed when I was there), a castle on the hill, and a nice pizza restaurant, the Citron Bleu…but that’s about it.

Due to yesterday’s malfunctioning Wi-Fi, I had to find somewhere to send in yesterday’s story, in the next big-ish town of Fraga; Orica-GreenEdge, Movistar and Sky were staying in the Hotel Casanova. For 2Ђ, I could use their internet and for a little more I could have a croissant and a very good cafй con leche, plus the bonus of watching some of the World’s top Pro cyclists coming and going. 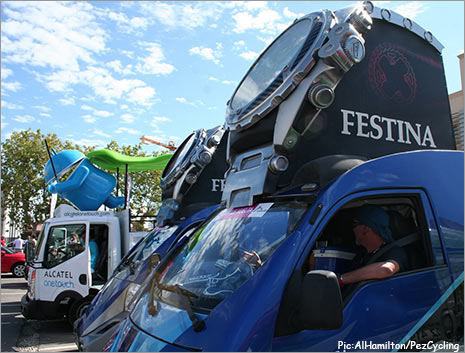 I was hoping the start village would be in the centre of Lleida, some photos of local architecture would be nice, but no it wasn’t to be as (yet again) all the fun was placed out in the suburbs, so no cathedrals or that sort of thing to photograph, just bike riders and nice young ladies. 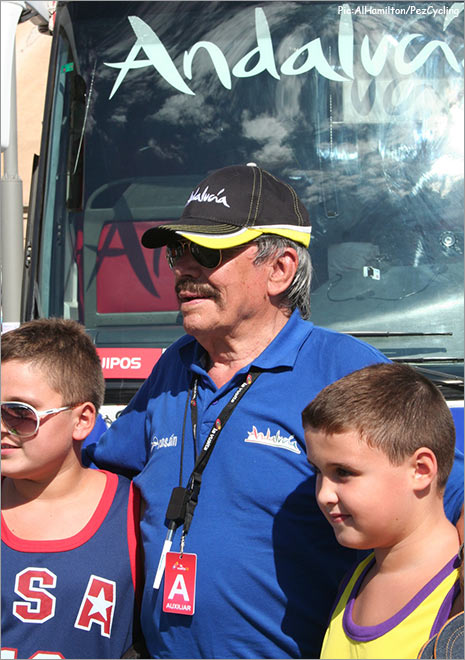 Jaume Mir has the most famous moustache in Spanish cycling, Jaume and his facial hair has worked on 51 Vuelta a Espaсa’s, go to photos of stage finishes back in the 1960’s and you’ll see Jaume stood behind the stage winner or yellow jersey winner, things haven’t changed much, except people ask to have their photos taken with him. 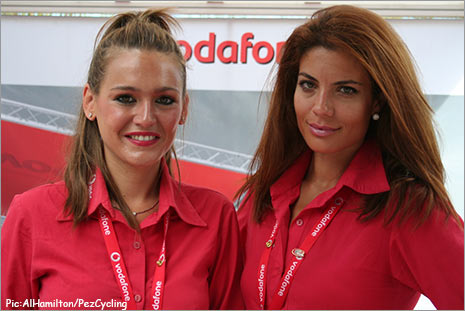 You might remember Lety Escolar and Patricia Ledesma who are working for mobile phone company; Vodafone again this year. Patricia and I had the usual moan about the hot weather and how things are much the same as last year, her boy friend is Manuel Quinziato of BMC, so I had to ask where he was and how is the team? “He’s in France riding the Plouay race, the team are great, just a shame that Cadel didn’t win the Tour de France again.”

Just like every other news outlet, the Vuelta newspaper; AS had the Armstrong story on the front page, inside there were three pages on stage 7 and also three on the Armstrong case, much the same stuff as you will have read everywhere else, plus probably some of the less flattering photos of the Texan. Of all the quotes from ex-riders the best had to be from Bernard Hinault, “this isn’t my problem” fair enough Badger. And with that back to the girls: 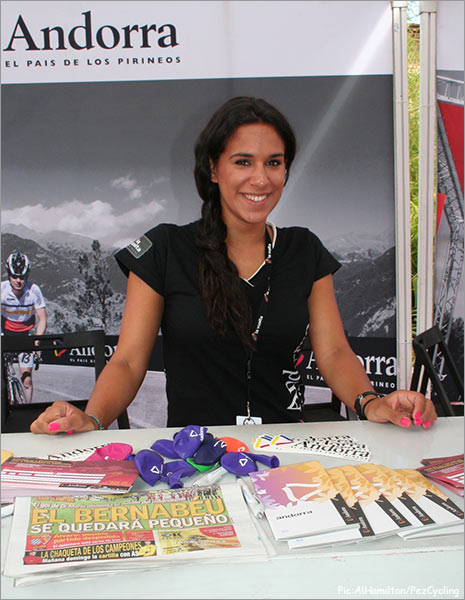 As the race is going into Andorra today, this is the girl handing out hats and bags. 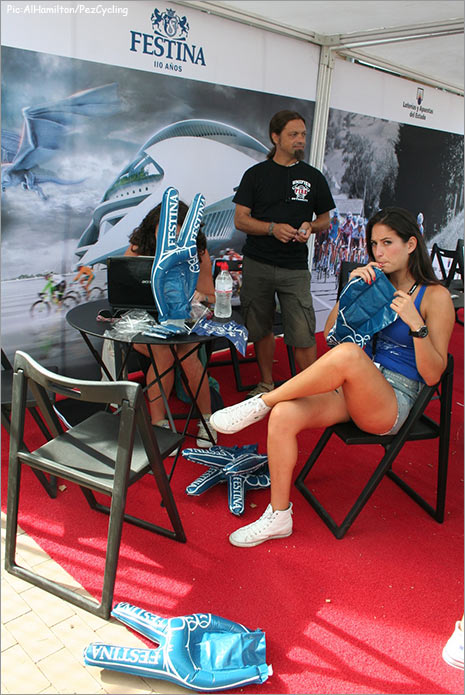 These Festina hands won’t blow themselves up! 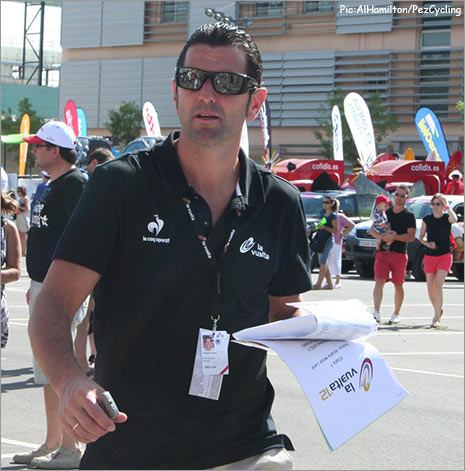 Out in the car park things were starting to get chaotic with team buses and cars needing to be positioned just so. Due to the attention the Alberto Contador receives his Saxo Bank-Tinkoff Bank bus is placed next to the signing on truck and he is the last to put pen to paper. Abraham Olano may have won La Vuelta and been a World champion and is the Vuelta 2nd director, but he can be seen sorting out the parking problems. 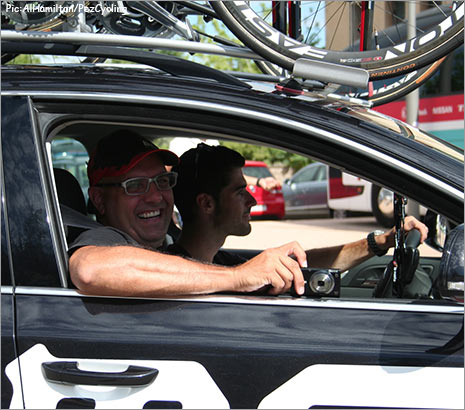 Many and old face was spotted, but it was great to see Sean Weide, press officer for BMC, check out his Facebook page for some great behind the scenes photos of La Vuelta. His best bit of good news (for me) is that the BMC team will be returning to the same hotel near me for their training camps and have to stay for dinner this time. 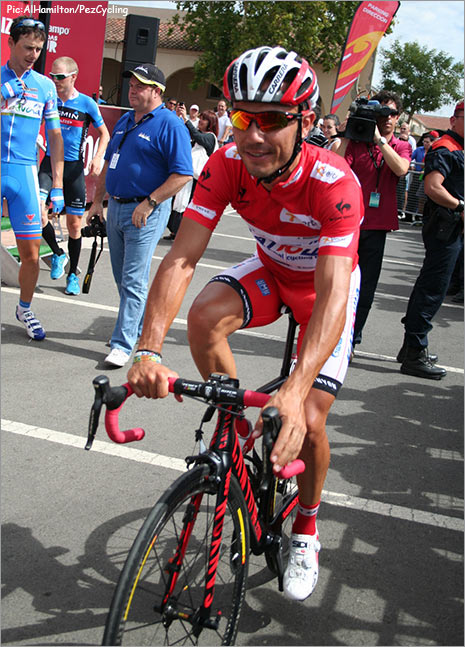 As I walked back to the signing on truck, one of the first riders there was the red jersey himself; Joaquim Rodriguez of Katusha, very keen to get the day under way as today’s stage to Andorra could be decisive, as it turned out Chris Froome lost a little time on the other three; Valverde. Rodriguez and Contador. 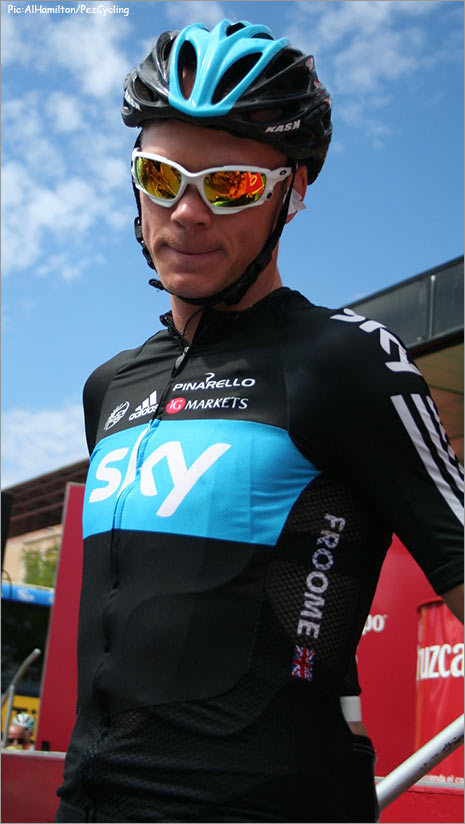 After the stage Froome gave a very good interview to Spanish TV, sharing his worries that it might be him against the three Spaniards, or as the interviewer put it “the Spanish Armada!” last year Bradley Wiggins was quite rude when asked anything on the podium or by TV, so Chris Froome came over very well and helped the cause of the Sky team after “that” crash incident. 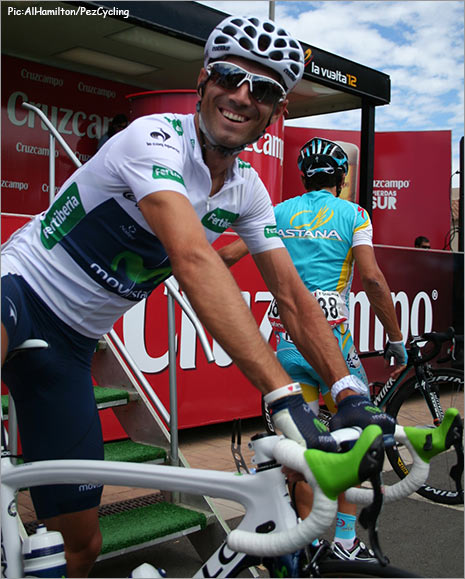 Alejandro Valverde looked good in the Combination jersey, which really belonged to Rodriguez, by the end of the day he would be tying with him for it, but would be wearing the mountains jersey on Sunday to Barcelona. 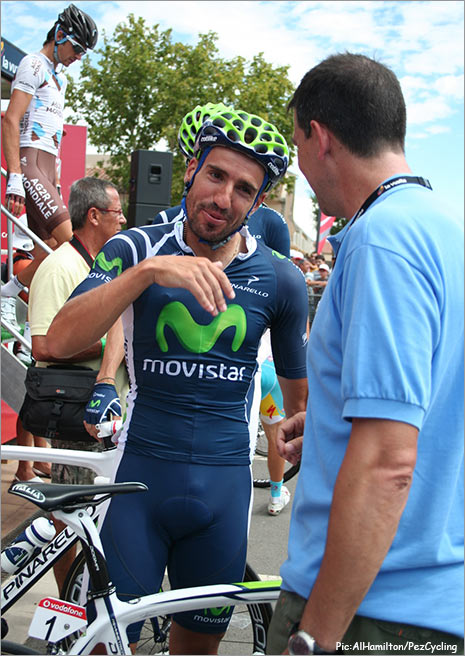 Quick chats and one sentence interviews was all that was possible, last year’s Vuelta winner; Juan Josй Cobo as always was happy enough, but today he would finish over 5 minutes down on team mate Valverde and any chance of a repeat win. 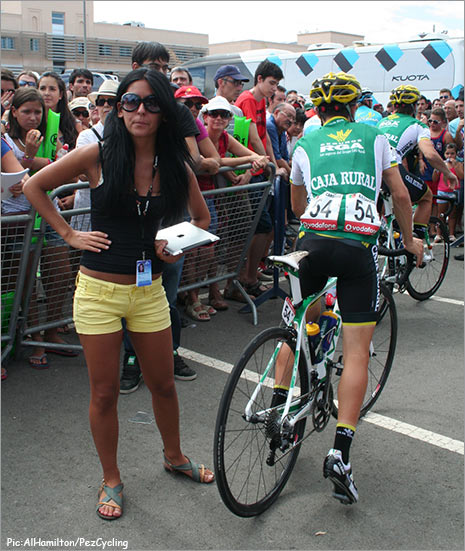 Ainara Hernando has been doing the La Vuelta TV interviews as well as her writing for Ciclismo al Fondo, from the look she gave me I’m waiting for the exclusion order, although I have photos of her going way back. 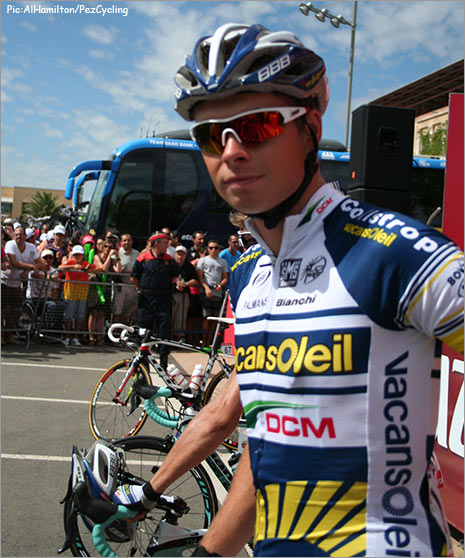 Bert-Jan Lindeman was in the long break to Alcaсiz the day before and it was great to catch-up with the young Vacansoleil-DCM rider, the last time was in Calpe on the Spanish coast in the winter. That was a great ride in the Dutch National championships Bert-Jan? “Yea, it was cold and wet, suits me better than here!” And yesterday? “That was hard and hot, but good.” See you in Calpe then? “Yea should do.” 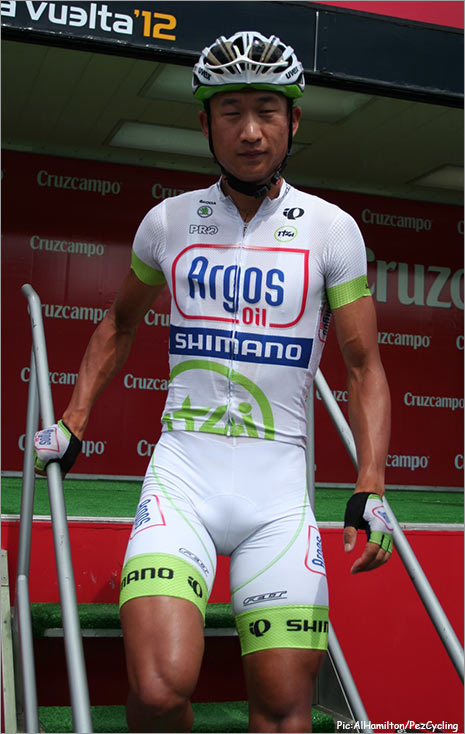 Argos-Shimano rider; Cheng Ji is the first Chinese rider to start a Grand Tour and along with him is his own press corps. I counted at least four, two stills photographers and another guy filming everything, plus a journalist and I think their wives were along for the trip. Cheng Ji is in 191st place at 1:21:24, but he’s still there. 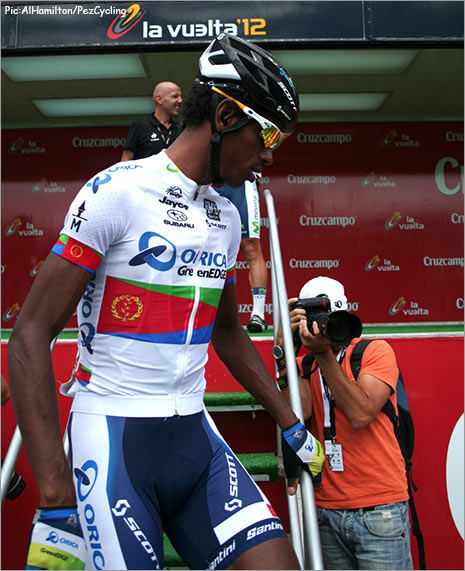 The other first time is Daniel Teklehaymanot of Orica-GreenEdge form Eritrea; he has no press team, but is doing OK in the race in 118th at 50:45. 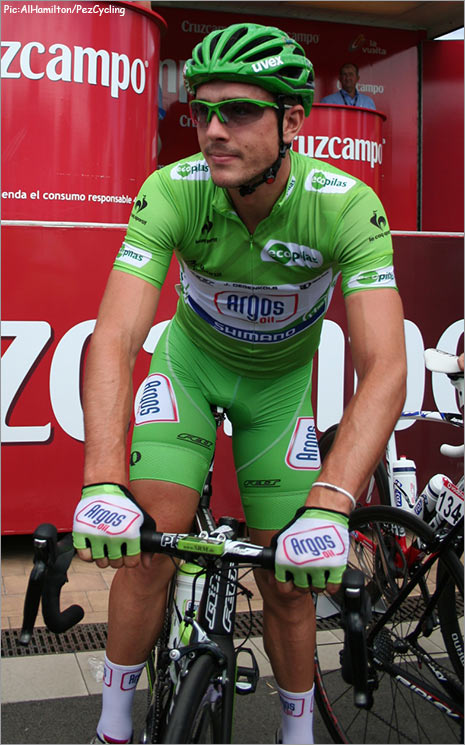 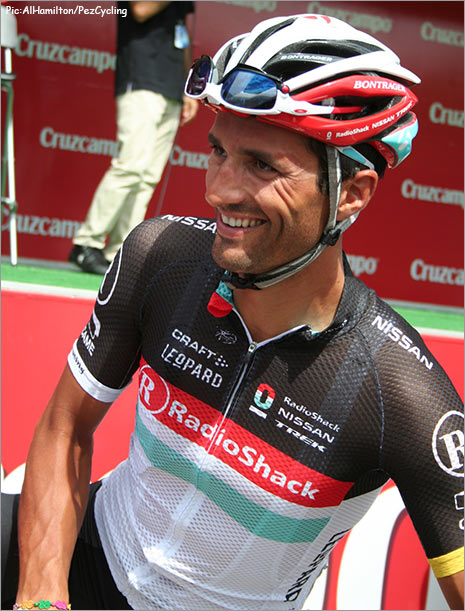 The sprinters were up next; John Degenkolb in green, three stage wins in this Vuelta has him battling with Daniele Bennati. The Italian won three stages in 2007 and has three other Vuelta stages in his palmares, although it looks like the German has the upper hand at the moment. 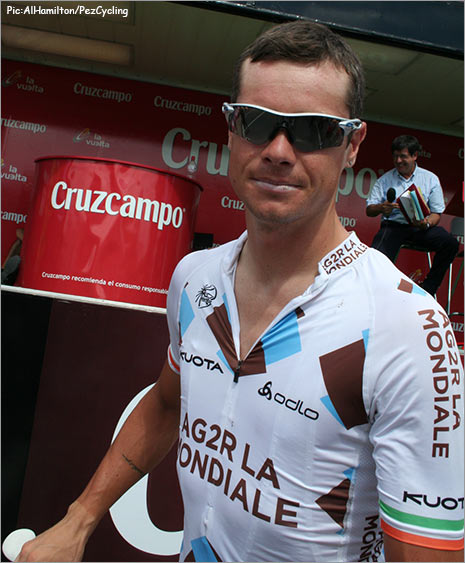 Nicholas Roche is leaving Ag2r-La Mondiale at the end of the season to join Alberto Contador at Saxo Bank-Tinkoff Bank and it seems to have given him a second breath as his Vuelta has been going well; 7th at 2:14. Nice lip-stick Nico? “When you are in this for six hours you need it, especially if/when I’m doing some kissing when I get home!” Fair point Nico. 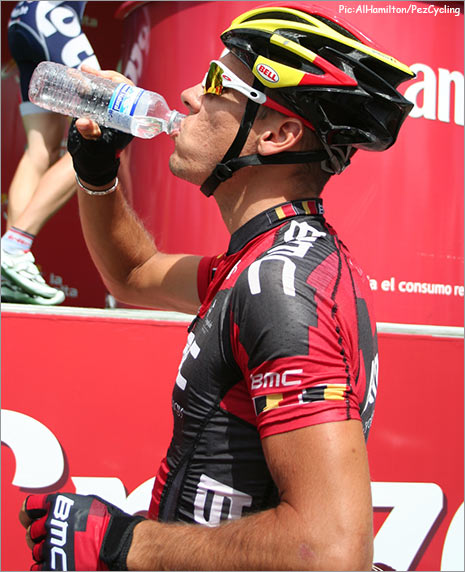 Amongst BMC’s big hopes for the season was Philippe Gilbert, but with one thing or another it’s not worked out that way (that is until yesterday, of course!). He knows the importance of hydrating though, with the temperatures in the 40’s in the first week you have to be careful. 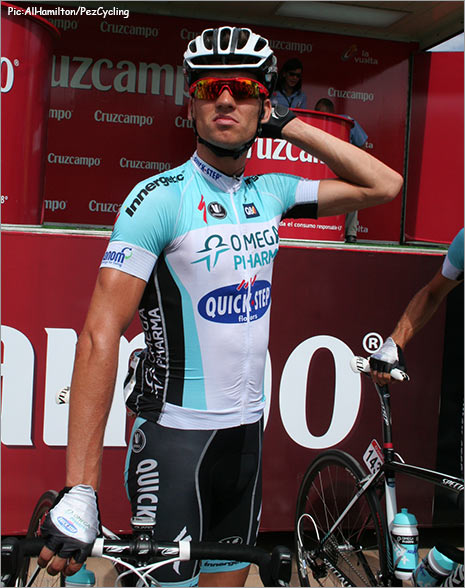 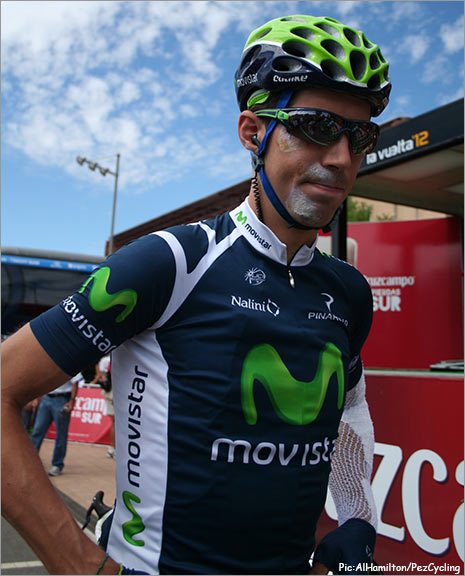 Imanol Erviti is still showing the wounds from that controversial crash, he’s still in the race, but you would think team Sky will not be on his Christmas card list this year. 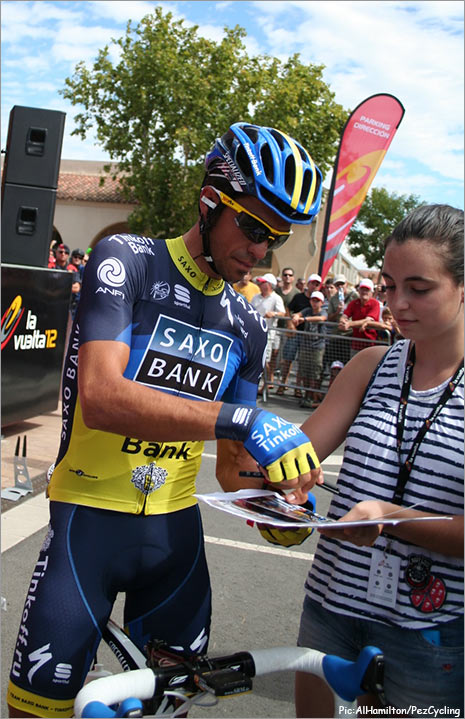 And last to arrive was Alberto Contador (with minder), you can tell when he’s around due to the noise and clamour, but he still finds time for the fans and he has a lot of them. Maybe he isn’t quite at 100% race ready yet, but there isn’t a race that he starts that he doesn’t try his hardest to enliven. Today wasn’t any different with his attack on the Collada de la Gallina in Andorra. 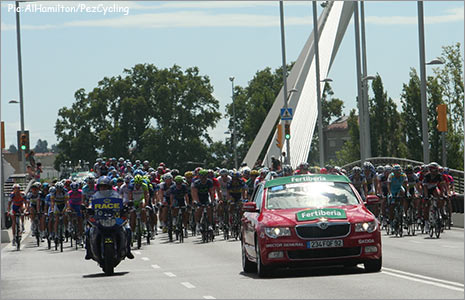 Time to go up the road a bit to see some cyclists actually ride their bikes and the bunch, as always, was an impressive site coming out of Lleida spread out over the bridge and there was young Bert-Jan, today would not be his sort of stage, although he was only 14:49 down at the stage finish. 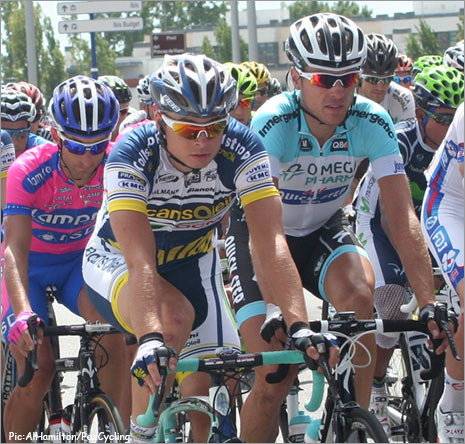 That just leaves me the six hour drive home. Madrid next for the last stage, but there is going to be a lot of excitement between now and then. Who is going to win the 2012 Vuelta a Espaсa? It’s still a very open race, any of the four musketeers could do it, they might be one for all, but not all for one.