The fab four of Rodriguez, Valverde, Contador and Froome battled it out today in the Vuelta’s only individual time trial but it was Astana’s Kessiakoff who stole the show!

With only one individual time trial in this year’s Vuelta this 39.4km test was always destined to be a crucial part of the race for this year’s Vuelta title. If we were to go on standard time trial form we could expect a strong time triallist like Contador or Froome to take minutes out of race leader Rodriguez but this time trial was anything but standard. One quick look at the race profile shows us that the organizers may have chosen a classic distance of 40km for the test but they also managed to put a big hill in the middle of the route.

The Cat 3 Alto Monte Castrove isn’t steep but at 10km long it would prove to be the crucial part of this time trial meaning that more than a quarter of the race would be spent on this climb. When you factor in the descent to the equation there is then just 20km of rolling/flat roads in this test, significantly reducing the chances of the time trial specialists. 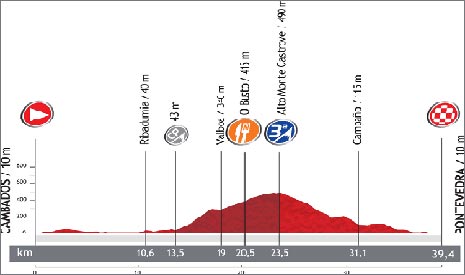 The classic 40km distance (25 miles) for a time trial but a far from classic profile.

First man off today was last man on GC, Lotto-Belisol’s Joost Van Leijen but his time didn’t exactly set the world alight – in direct contrast to young Australian, Cameron Meyer (Orica-GreenEdge) who sped around the course a few minutes later to finish in a very impressive final time of 53m53s for an average speed of almost 44kph – despite the hill, twists and turns of the circuit. This time would prove very hard to beat and the strong time triallists came and went with not even the outside favorites for the stage such as Tony Martin (54m15s), Jonathon Castroviejo (54m10s) and Lars Boom (54m42s) able to knock Meyer off the top spot. It took another Australian in the form of Ritchie Porte (Sky) to finally better Meyer besting his young compatriot by 2 seconds.

Porte didn’t stay in the hotseat for too long though as Frederik Kessiakoff (Astana) put in an amazing ride shortly after, flying around the course to finish a full 1m15s ahead! Kessiakoff had a great Tour de France holding the KOM jersey on 6 different occasions and has clearly been able to hold onto his form – possibly giving Froome hope that he could do the same?

As the favorites started their race, Kessiakoff was stll easily in control at the top of the leaderboard, could any of the top 10 on GC knock him off? Rabobank started the stage with 3 riders in the top 10 on GC (Mollema 10th, Ten Dam 9th & Gesink 5th) and were hopeful of moving their three up further and it looked good for Gesink when he came through the first time check in almost the same time as Kessiakoff.

It was Alberto Contador that was able to better Kessiakoff’s first time check though, 2 seconds ahead of the Swede but more importantly 8 seconds ahead of Froome, 31s ahead of Valverde and 42s ahead of Rodriguez. If the time checks at the first check would stay the same at the finish that would leave Rodriguez in the red jersey but Contador would move up into 2nd and Froome drop to 3rd. There was of course only 13.5km ridden at this stage though and some serious climbing and then descending still to go. 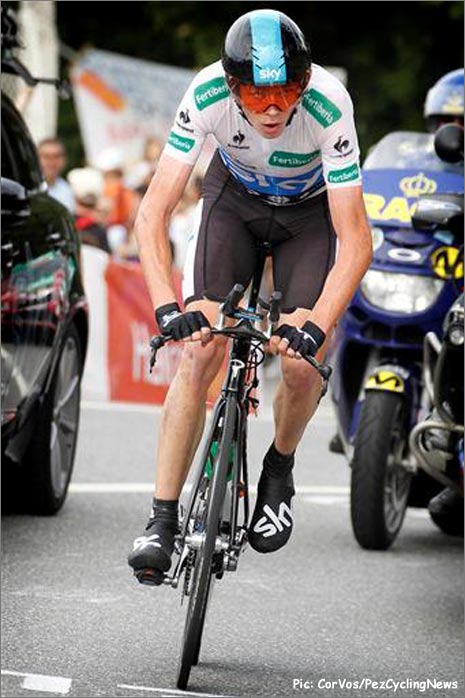 Froome didn’t look 100% at ease today with the route perhaps not quite suited to his tt style.

The second time check was at 23.5km at the summit of the climb and Kessiakoff’s time was still the best after the GC riders rode through. Contador was the best of the fab four but still unable to take enough time on Rodriguez nor Valverde who had both climbed well. Froome lost 10 more seconds to Contador and appeared to be fading whilst Kessiakoff who was sitting in the hotseat at the finishline started thinking that maybe today could be his day. 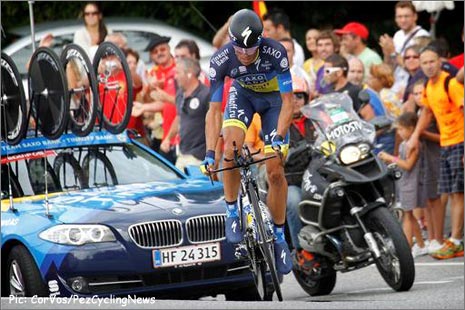 At the finish Contador was clearly tiring and was unable to compete with Kessiakoff’s surprising performance finishing 17s down but he was good enough to put time into all his GC rivals. Contador put 22s into pre stage favorite Froome but only 45s on Valverde and 59s on Rodriguez meaning that Rodriguez holds onto his red leader’s jersey by just 1 second!

A great ride by Fred Kessiakoff but for me the ride of the day was by Joaquim Rodriguez. 7th place on the day and only losing 59seconds to Contador and 37s to Froome was an amazing performance and the best time trial that I have ever seen him produce. The new race favorite? With no more time trials to come and numerous summit finishes with bonus seconds on offer, things look good for Rodriguez. 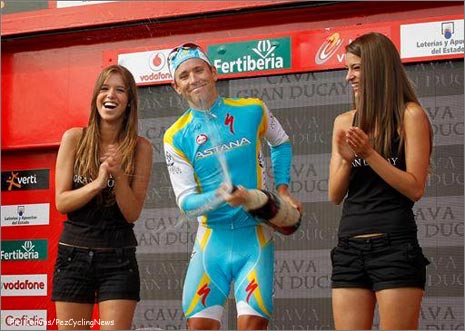 Who’d have bet on Fred Kessiakoff being the one spraying the champagne before the start of the stage?

The top 10 itself is also completely changed with the 3 Rabobanks holding down their spots but young Andrew Talansky zoomed into contention after a strong time trial currently sitting in 8th place, 4m08s down to replace Igor Anton who slipped to 11th.