A long transition day at the end of a three week tour with a HUGE day on tap tomorrow meant that the racing was fairly calm for most of the day, but a frenetically raced last 20km lit the race up!

With the Vuelta rapidly coming to a close, today’s Stage 19 looked like being the last chance for a breakaway rider to succeed. With a simply HUGE stage tomorrow to Bola del Mundo where the GC battle will be decided for sure, the key for the GC riders would be to sit in and save as much energy as possible today. Luckily the profile of today’s stage bode well for the GC guys with relatively flat riding through open farm land on the agenda – until the last 5km that is. 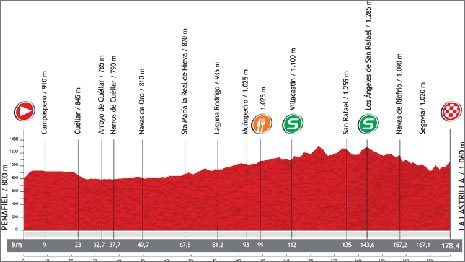 On paper Stage 19 looked like a standard transitional stage just until the last 5 kms.

The last 5 kilometers looked like they would be much more interesting than the first 170….

The last 5kms were full of twists and turns through the town that included a small stretch of cobbles and even an uphill sprint meaning that the finish would be anything but simple. Opinions were split amongst the experts as to whether the sprinters like Bennati and Degenkolb would be able to conquer the finish or whether it was more suited to the Classics riders like Philippe Gilbert.

The Early Break Goes
The two wildcard teams in the race, of Caja Rural and Andalucia weren’t mentioned in any expert’s tips for the day so they settled into their standard tactic for the day – the suicidal early break. As the kilometer zero started, Aitor Galdos (Caja Rural) and Jose Vicente Toribio (Andalucia) set off on a long lonely adventure shooting out of the peloton at speed as the peloton simply rolled along.

When this 2 man break built their lead up to 10 minutes in rapid time, Argos-Shimano, RadioShack-Nissan and Lotto-Belisol said, ‘That’s enough now’ and put 2 men each on the front to bring the gap down. These 3 teams used their experience and strength in numbers to reduce the pair’s lead to a more comfortable 5 minutes and then they simply left the two there to die a slow, slow death out front.

With 40km remaining the gap was down to less than a minute and finally with 28km remaining the two were put out of their misery and their time on TV today was finished. Surprisingly the two’s respective teams Caja-Rural and Andalucia then went to the front to set the pace for a number of kilometers despite having no sprinter, classics rider or GC man to work for. Not sure what the tactic there was but perhaps they weren’t happy that their men got caught almost 30km before the finish and they hadn’t had enough T.V time? 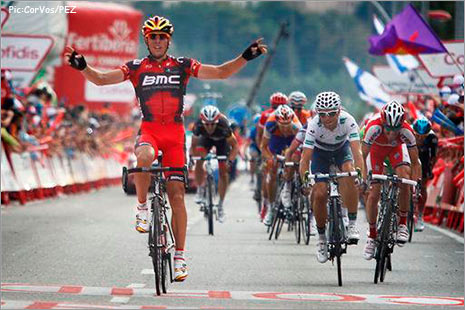 Movistar Go For The Bonus Seconds
The tactic of the two wildcard teams didn’t last long though with Movistar and SaxoBank-Tinkoff soon taking over on the front and then even upping the pace from seriously fast to super fast at 17km before the finish causing the bunch to split into three pieces. No GC riders were caught out though but Movistar kept the hammer down to set Valverde up for the intermediate sprint which Valverde duly won, picking up 6seconds bonus for his troubles. Could these be crucial for the final GC in Madrid? It wasn’t just Valverde going for the sprint though but also that noted sprinter Robert Gesink sprinting….

Surprisingly Gesink sprinted well though just being pipped for 2nd by Rodriguez meaning that 2nd, 3rd and 6th placed on GC all gained precious seconds in the race for red in Madrid.

Last 10km
Movistar & Ag2r kept the pace on after the sprint with the now shattered bunch containing just 40 or so riders with the high speed pace making on the front meaning that the dropped riders were never going to come back. With 4 km remaining Cofidis who have nothing to show for their Vuelta so far launched their Spaniard Garcia off the front and he quickly built up a good gap. Four high horsepower riders saw the danger here though with Flecha (Sky), Roche (Ag2r), Degenkolb (Argos-Shimano) & Breschel (Rabobank) bridging across and quickly leaving Garcia behind.

1.5km To Go
With the BMC led bunch breathing down their necks, Roche launched himself out of the group in an attempt to take the win on the uphill finish and Flecha and Breschel were unable to match the Irishman. Surprisingly it was the bulky sprinter Degenkolb who got across to his wheel but he was a spent force and when Philippe Gilbert came screaming past with Ben Swift (Sky) glued to his wheel neither Roche nor Degenkolb could respond. There was still a few hundred meters to go to the line though and Gilbert realized he had a sprinter in his draft and for a moment it looked like he was going to sit up, not wanting to tow Swift to the line. Instead he rode like the Gilbert of 2011 and simply rode Swift off his wheel to take his 2nd win of the Vuelta and his 2nd win of the year. A superb win by Gilbert who is looking leaner than ever and has now marked himself out as an obvious favorite for the upcoming Worlds. 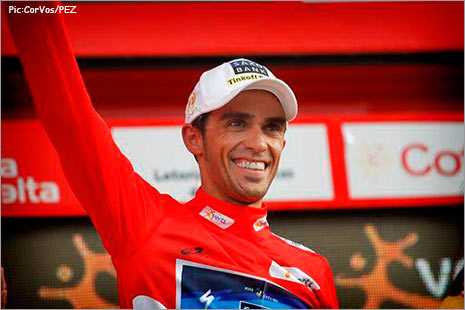 One more day for Contador to make it through, and then a second Vuelta title will be his.

Valverde was then the best of the rest just a bike length behind Gilbert with Daniel Moreno besting his team leader Rodriguez for 3rd, stealing valuable bonus seconds away from his boss! Rodriguez did however gain time on Contador at the finish due to splits in the group though with the top 4 being awarded a time 3 seconds quicker than the rest.

What a last 20km of a stage after a very mediocre start! Both Valverde and Rodriguez gained some bonus seconds back on Contador today indicating that they are still hopeful of improving their GC ranks and maybe attacking Contador tomorrow? Should be a great one. Keep it Pezzed!