Race Report: 16.5 kilometres of team torture would decide the first leader’s jersey in this year’s Vuelta a Espaсa. Sky were fast in the first half, Rabobank thought they had it, Saxo-Tinkoff limited their loss, but the Movistar team of 2011 winner Josй Cobo were solid throughout to put Jon Castroviejo in the red jersey. A win of 10 seconds into the bullring was quite a big killing!

As has become the norm for the Vuelta, the first stage was an evening team time trial, this year through the Navarra city of Pamplona. From the start in the Plaza del Castillo the course heads to the outskirts of town to follow a fast route before coming back into the centre for some technical cobbled sections, more famous for the “Running of the Bulls” during the San Fermнn festival, and into the Plaza de Toros for the finish after 16.5 kilometres. The first team off at 19:03 CET was the Caja Rural of Spain and the weather was still warm after the 40єC during the day, with very little wind.

The last time the Vuelta was in Pamplona was 1994, that year Tony Rominger was the winner, the weather was much colder in those days as the race was run at the end of April and early May, no problem like that today!

The evening started off with the now mandatory measuring and weighing of the bikes by UCI officials, last year there were a couple of panics over the angles of the saddles, hopefully this year there won’t be any surprises. The crowds were not kept away by the heat as the streets and the Plaza de Toros were packed.

And the 2012 Vuelta is off!
Caja Rural lined up on the big red ramp in a new white and red kit, not their usual green and white, into the first corner and the gaps started to show, although they did get together for a fairly ragged line. At the time check they had lost a rider and recoded a time of 10:01. The Spanish team shot into the bullring with a final time of 20:22 which wasn’t going to set the world on fire.

Amongst some pundits the Australian Orica-GreenEdge team were a favourite for today, but they are not the same team that rode the Giro d’Italia so successfully back in May, this team is made up of younger riders. At 8 kms they had a time of 9:30 and were in pieces coming to the finish with one rider on his own followed by four later, their time was 19:29.

Garmin-Sharp also didn’t bring as strong a team as for the Italian Grand Tour, but they always like to show well in the team time trial. The possible GC man could be Andrew Talansky; winner of the Tour de l’Ain. 8kms they were 1 second faster than Orica-GreenEdge. But Garmin-Sharp had a crash with at least two riders hitting the deck, their finish time for the five riders who made it was; 20:25, losing nearly a minute due to the crash.

BMC has a stronger team, possibly without a GC leader, but with Philippe Gilbert they must be looking for stage wins. 9:23 was their split time and at the finish Gilbert brought them home in 19:01 for the best time at this point. 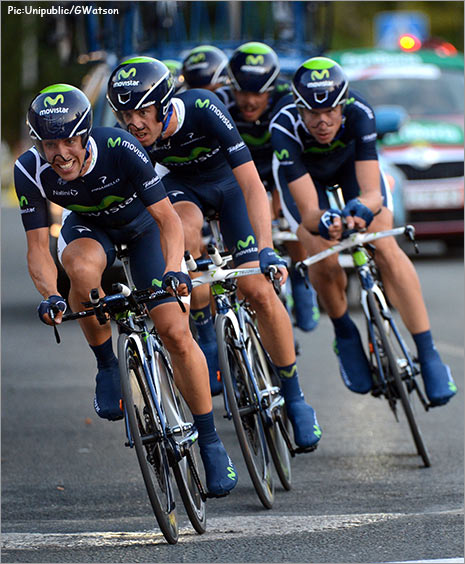 RadioShack-Nissan finished with five at 19:46 as Omega Pharma – Quick-Step were starting, Tony Martin is said to be here to train for the World TT champs, so what he might do today is anyone’s guess. Ag2r-La Mondiale were out on the course and only 19 seconds down on BMC as FDJ-BigMat recorded 19:48. Rabobank were also on the course at 12 seconds to BMC. At the finish Ag2r-La Mondiale gave a handy performance, the same could be said of Andalucнa with a time of 19:51 and finishing with eight men.

Omega Pharma – Quick-Step became the fastest at the time-check with 9:13 as Rabobank had six riders into the finish and put up a new fast time of 19:01, with a fraction of a second on BMC. Omega Pharma – Quick-Step pushed it just under 19 minutes as Astana were only 3 seconds slower than them at the check. Next in was Vacansoleil-DCM with 19:25, Lotto-Belisol were 7 seconds down at 8 kms, Astana at the finish had only four riders and had to wait for their fifth in 19:23.

Katusha brought their leader; Joaquim Rodriguez to the split 4 seconds down as Euskaltel-Euskadi were holding the wheels for a final time of 19:19. The Sky team were well drilled off the ramp with a perfect line at high speed through the wider sections. Lotto-Belisol had six over the line in 19:03, but they could have been better if they had held it together on the run-in.

Saxo Bank-Tinkoff Bank kicked down the ramp to a big cheer for Alberto Contador, how he will go after his ban is debateable, he rode well in the Eneco Tour, but three weeks are different to one.

Rodriguez was first over the line for Katusha in 19:05 at the same time Sky put up the fastest split time of 9:08 and still had seven of the team together. Saxo-Tinkoff at the split were down by 4 seconds on Sky and it was Contador who was the hardest of workers for the team. Argos-Shimano finished in 19:50. Sky were not far behind Argos into the bullring but had slowed in the second half of the course to cross the line in 19:03. 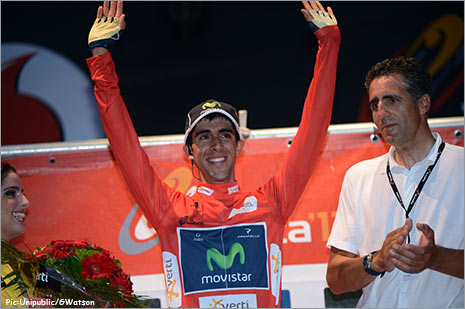 Movistar were flying at 8 kilometres only 2 seconds down on Sky as it was starting to look like Rabobank were the stage winners. Saxo Bank-Tinkoff Bank charged into ring to record 19:06. This left only Movistar with last year’s winner Cobo and Valverde amongst their six finishers, they were fast but a little ragged. They came in with a brilliant 18:51 a good 10 seconds faster than Rabobank and the other tied teams. The first across the line for Movistar was Jonathan Castroviejo to take the leaders jersey, presented by Miguel Indurain, Cobo and Valverde were safe in 5th and 6th place.

So as the sun set over Pamplona we have the first red jersey of the 2012 Vuelta a Espaсa, keep it PEZ for all the action from Spain.