Race Report: One final showdown – 170 kilometers and one monster mountaintop finish to Bola del Mundo remain. Can Valverde or Rodriguez dislodge Contador from the top spot? Let’s dive in…

…aaaaand let’s fast forward to the fun part – inside 10k to go.

The break is mostly together for the opening slopes leading up to the Bola del Mundo climb. The initial truce is broken with a monster attack, and the nearly two dozen is down to a quarter of that. Three go, two follow, and the counter goes immediately, then the five immediately becomes three with Denis Menchov, Richie Porte, and Kevin De Weert at the head of affairs and flying.

Behind, Euskaltel, Saxo Bank, and Movistar are trading pacesetting blows, but Alberto Contador is far back in the group. It’s probably nothing, but it’s the kind of thing that raises eyebrows.

6k to go, Menchov and Porte are still swapping evenly, whilst De Weert sits on.

The merry band of carrot colored Euskaltelites are further whittling the field down behind to approximately 30.

Interestingly, the gap is not coming down – not even slightly. Inside 6k to go, the gap is 5:15. At around the 10k to mark, the gap was 5:05ish. In short – there’s some impressive riding going on up the road.

Under the 5k to go banner, and it’s status quo with the lead trio and a kilometer and a half behind them, Euskaltel drives.

Oooh, action! Benat Intxausti attacks, and the fun begins behind.

The move doesn’t yield much in the way of bringing a group clear, but it’s more than enough to jettison another chunk of climbing hopefuls. No problems for the favorites.

Aaaand another attack – Igor Anton goes, and a quick glance down the GC shows that Anton’s aggression could put Andrew Talansky’s 8th place in danger.

Anton bridges across to the remnants of the day’s big break, while the heads of state check in for work as Valverde rockets off with Contador positioned neatly on his rear wheel.

The break turns on to the tiny road to the summit of Bola del Mundo, and the fun begins in earnest. The team cars aren’t allowed on this section of road – just fans, riders, and a few neutral support vehicles.

Back in the field, Gesink is leading the way, but the contenders are massing around him, readying for the sharp right hander onto the nasty concrete road, which will be their constant companion for the final three kilometers.

Up ahead, Menchov and Porte are side by side. Awesome.

Then they aren’t. There are a couple of fans ensuring that riding is done in single file fashion. Porte leads his much larger rival.

Anton rides away from the small trio he had only moments before joined.

Saxo Bank is in perfect control at the head of the race – two teammates remain for Contador as they make the right hand turn, and the crowd roars.

Immediately, the road kicks up, and we’ve got ourselves a bike race!

Ahead, the duo of Menchov and Porte are at 2k to go, with no changes, save for the ever increasing wildness, likely drunkenness of the fans.

The leaders are down to under a dozen – eleven in all with Contador’s teammate still wreaking havoc.

Up to this point, no aggression to be found from either Valverde or Rodriguez on the business end of Bola del Mundo. When will they go?

That eleven strong group is suddenly four – Moreno hits the front hard, and all that’s left are Moreno, Contador, Valverde, and Rodriguez.

Two kilometers to go, and the concrete is growing short for Rodriguez and Valverde to do what should be impossible – take down Contador.

Rodriguez catches Anton, then goes hard again – and Contador is in difficulty! He puts a few seconds into Contador, and he’s off.

Barring a complete meltdown, it won’t be a problem, but Purito’s statement is clear and defiant.

Up ahead, through the throngs of thousands of fans, Porte and Menchov are still locked in their death match with Porte leading the way. 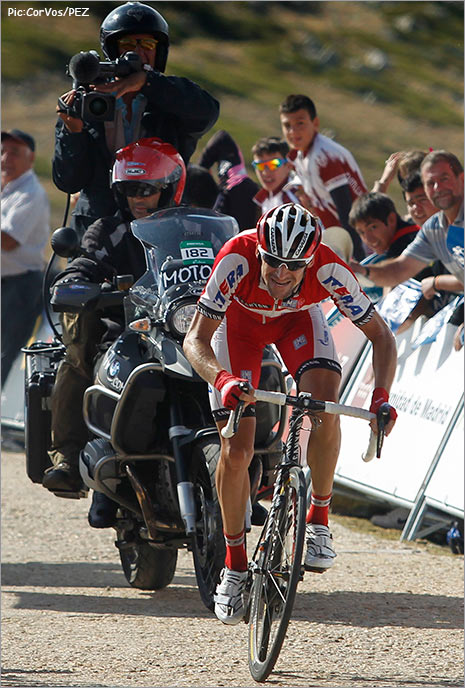 Contador, out of his saddle, is cheered at deafening levels, but a seated Rodriguez is putting more time into Contador. The cameras flash back and forth from red to green, red to green.

Back to the duel for the stage – Menchov is generally considered a solid sprinter for a GC rider, but there’s no telling at the top of a climb, which hits 23%. Yep, Menchov obliterates Porte in the final meters.

Pieces of the break trickle in.

The kings of this year’s Vuelta still have some work to do though. Rodriguez is locked to his saddle, lurching, grinding, searching for more power. Satisfied that he can’t find it in his saddle, he leaps up and digs still deeper.

A look back down the mountain a little bit shows a gap of around 25-30 seconds to Contador and Valverde, who have come together in the final kilometer.

Ooooh! Contador is going backwards. Valverde has left him behind, and now we have a positively odd scene – Rodriguez leading, Valverde in the middle, and Contador drifting backwards.

At the top, Rodriguez surges over the line, while Valverde comes in 20 seconds later. Contador limps in a further 20 seconds behind – all smiles and a brandished pistol. 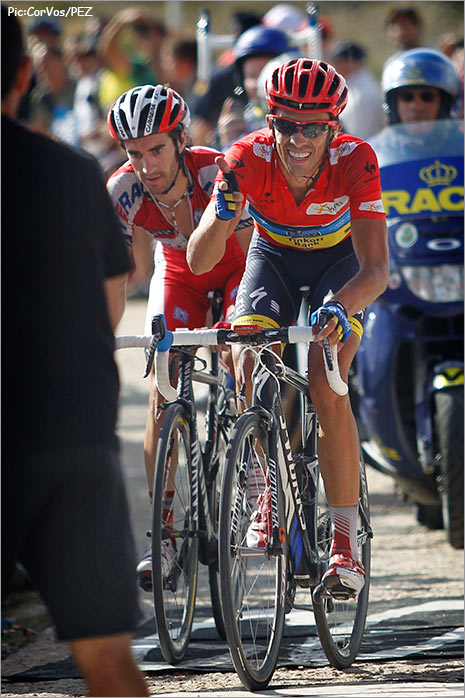 The utterly spent riders are aided by a small army of soigneurs, who grab their charges and push them onward, away from the finish. Would they have just collapsed on the line without the help of the soigneurs? It wouldn’t be surprising.

Chris Froome is off his bike at the top! He crossed the line and promptly dismounted. I’ve had enough of that bike, thank you very much.

Moments later, King of the Mountains Simon Clarke and Nicolas Roche cross the line together – Roche puts an arm around the new KOM champion.

And back at the finish line, the trickling stream of riders are met by an even stronger flow of men on foot with helpful hands and welcome pushes.

Is it really over? Unbelievable. What a Vuelta.