The winner of Paris-Roubaix is assured of a place in the main pages of the cycling history books. The winner of the Amstel Gold Race isn’t. Why ? It’s a great race, with its steep short slopes and narrow roads, and has delivered winners like Merckx, Hinault, Maertens, Knetemann, Zoetemelk, …

This story first ran in 2003, but we deem it worth a second read!

The problem is Amstel’s history: the first race took place in 1966, and was lucky to see 1962 World Champion Jean Stablinski as a winner. So, it’s a youngster between the traditional classic races that have now more or less 100 years of history, and that were monopolised for ages by France, Belgium and Italy.

Do you know who won the Amstel Gold Race in 1968 ? I don’t (well, I do, since I have the victory list in front of me). It was Arnie Steevens who won that year. The other classics’ winners that year: Altig in Milan-San Remo, Godefroot in the Tour of Flanders and Merckx in Paris-Roubaix. No one remembers Arnie Steevens winning the Amstel.

That has been the race’s problem for many years, until it was integrated in the World Cup. Nevertheless, the Amstel Gold Race has now major importance as one of the 5 spring classics, and … Amstel beer is one of the best beers there is (take the word of a Belgian for it) ! 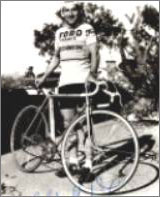 The very first Amstel Gold Race saw Jean Stablinski initiating the decisive escape with 12 companions. Amongst them Dutch favourites Peter Post and Cees Van Espen, local hero Jan Hugens and the strong Belgian Bernard Van de Kerckhove. An attack from both Ford teammates Stablinski and Van de Kerckhove was only countered by Hugens. But the Dutchman had mechanical problems a few hundred meters from the finish, and Stablinski won easily. 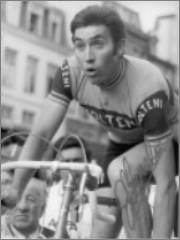 After winning Paris-Roubaix and Liиge-Bastogne-Liиge earlier that season, the “Cannibal” was still not satisfied. Eddy has a simple motto: “Attack”. And that’s exactly what he does. The peloton explodes and a select group of 16 riders are in the lead: Merckx, Zoetemelk, Maertens, Verbeeck, Poulidor, Van Springel, … With a remarkable effort, Hennie Kuiper goes solo, immediately followed by Zoetemelk. Merckx waits a while, then jumps and joins the 2 Dutchmen. He looks at them, and – at the next climb – places one of his famous violent accelerations. No one left, Eddy heading to the finish at race car speed. He will finish more than 3 minutes ahead of Frans Verbeeck and Herman Van Springel.

1987: The 40th birthday of JOOP ZOETEMELK
After a glorious career – winning Tour and World Championship – Joop Zoetemelk couldn’t quit. At 40 years of age, he still fights his battles against all the youngsters who have appeared during the last years. Member of the modest Superconfex team, he once again signs the Amstel starting sheet (for the 18th time !). The battle really starts at the end of the race, and Joop finds himself in the lead with Steven Rooks, Teun Van Vliet, Bruno Cornillet and the fast Englishman Malcolm Elliott. Elliott is the big favourite being – by far – the fastest one of the lot. But then Joop Zoetemelk takes off, for what could be the slowest initiated escape of classic history. He sneaks away – slowly but surely – while both Rooks and Van Vliet protect his escape. Joop Zoetemelk is celebrated as a national hero, when reaching the finish line some 30 seconds before Rooks and Elliott. The last salute of an immense champion !

1993: Sprinting lessons by ROLF JAERMANN
The race really started on the famous Cauberg: Jaermann, Van der Poel and Heppner launch the decisive escape. Gianni Bugno – World Champion at the time – reacts and joins the leaders. Again and again, Bugno tries to get away. Van der Poel and Heppner break, Jaermann only bends. A 2 man sprint, Bugno being 100:1 favourite. Launching the final sprint much too late, Bugno is beaten by half a wheel by Swiss Rolf Jaermann. A major surprise, completed by the legendary comments of Mario Cipollini: “I’ll soon open a sprint school. I already have 2 pupils inscribed: Ballerini and Bugno.” As Gianni Bugno, Franco Ballerini lost the sprint he never should have against Gilbert Duclos-Lasalle, in Paris-Roubaix earlier that year. Rolf Jaermann won again in 1998.

Last year saw the Alexandre Vinokourov take his second great win of the season (after Paris-Nice), and go on to storm the TDF in July. We’ll have to watch for a connection with this year’s winner and what plays out at the Tour.