It’s a feat that’s never been done before, and by someone no-one expected either just over a week ago. Davide Rebellin is the first man to take 3 Ardennes Classics in a season after another brilliant performance in Liege-Bastogne-Liege this afternoon.

Around Europe, the superlatives are flowing like champagne from the winner’s podium. Rebellin is ‘incredible’, ‘untouchable’. 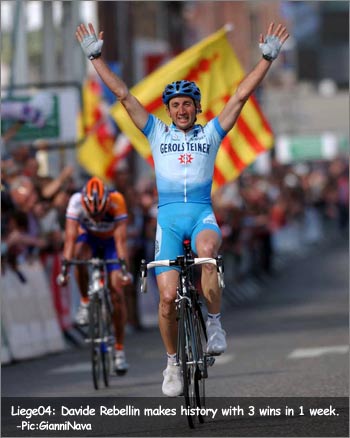 It was a great day in Belgium – warm and sunny. But there was no Danilo Di Luca (too ill to start) and Christophe Moreau pulled out around half-way due to the fact that he hasn’t recovered from his early season injuries.

It took almost 2 hours of racing for any major move to stick – Belgian Jurgen Van de Walle finally got away taking Inaki Isasi (Euskaltel), Tankink of Quick.Step, Strauss of Gerolsteiner – continuing his role as sacrificial Classics lamb as he was off the front at Paris-Roubaix – and Lefevre of La Boulangere. Raivis Belohvosciks bridged up to make six.

The six turned in Bastogne for the hilly return to Liege with getting on for 10 minutes on the main field who were just clipping along at a tempo. The Rabobank, T-Mobile, Lotto and Phonak teams were doing most of the work and gradually wore away the break’s lead.

CSC were also prominent through Kurt Asle Arvesen’s attack off the Cote de Wanneraval about 80kms from home. He was soon followed by Jorg Jaksche – complete with “broken” arm, and Alex Botcharov, a good climber from Credit Agricole. They caught the remains of the leading group (Tankink and Strauss) with just over an hour of racing to go.

They hammered off up the La Redoute climb. But much like other Classics this year, there was much weirdness as a huge group of around 60 were still together coming off La Redoute – something that never used to happen – and that was despite guys like Boogerd, Bettini and Van Petegem trying to split things up.

CSC were powering things along towards the Cote de Sart-Tillman and the Cote de Saint Nicolas. Multiple attacks were going but nothing was sticking at all; constant action with even Frank Vandenbroucke off the front at one point.

Hitting the Saint Nicolas climb Peter Van Petegem suddenly flew clear, immediately chased by Bettini, Boogerd, Rebellin and Vinokourov. It was Boogie, Rebellin and Vino who got the decisive gap, and started to pull away. Euskaltel’s Sammi Sanchez jumped off the remainder of the peloton to chase them.

Into Ans, where Tyler Hamilton made his race winning move in 2003, and Vino tried a copycat jump. He motored away, and Rebellin just waited for Boogerd to take up the chase. Sitting on the Rabo-boy’s wheel, he got a free ride as they clawed the Kazakh back.

Showing class and cool, Rebellin let Boogerd open up the sprint and just blew by easily for the win. He sailed over the line arms aloft, big smile on his face – the first ever Ardennes triple crown winner. Vino was knackered from his attack and couldn’t offer anything in the sprint but held on for 3rd.

“It’s almost miraculous because Boogerd was really strong, but I was able to keep him under control”, said a jubilant Rebellin after catching his breath.

Rebellin now has to try and keep his form at a level that will allow him his next objective – a stage win and a spell in pink at the Giro d’ Italia, which kicks off in just a fortnight.

HOMEBOY Belgium: I Have A New Dream!