For the riders, it might well be another day in muddy Hell. For us fans, though, it will be a thrilling day of action, as Paris-Roubaix rolls over the cobbles for the 102nd time. Pez CyclingNews checks out the contenders for glory in 2004.

The weather forecast looks like being wet and cold for Belgium on Sunday as around 200 hardy souls set off from Compiиgne, heading north-east to Roubaix.

This will be a farewell appearance for Johan Museew, 3 times a champion here, so it will be an emotional day. The organisers have shown their intention of making a race for Museew to remember by sticking in 2 more sections of cobbles! We’ve now got 50 kms of cobbles, which kick in at the 100 km mark. The worst are in the Forest of Arenberg, where Museew suffered a career-threatening accident in years gone by, and at Mons-en-Pйvиle (a new section) which is 3 kms long. 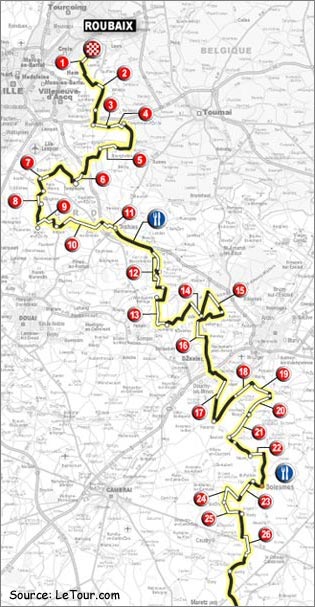 As usual, we can expect the main challengers for Paris-Rubaix this year to be the same guys who’ve been successful here before. Here’s a quick look at the contenders.

When you’ve won a race 3 times before, there’s only so much a Directeur Sportif can say to you. Museew knows what he has to do to bow out in glory. Backed by Gent-Wevelgem winner Tom Boonen, and 2001 Roubaix champ Servais Knaven, the Lion of Flanders will have probably the strongest team in the race totally devoted to his shot at a 4th win. It doesn’t matter who you support – if Museew wins, no-one will be too disappointed to see a legend go out on top.

The defending P-R champ was just missing that 2% that could have made the difference last weekend. He got tailed off on the Kemmelberg when Wesemann attacked in the Ronde, and we’ll have to see if he has regained his strength for Paris-Roubaix’s war of attrition. If he has, he’ll be right in the mix.

The 3rd former winner taking part, things haven’t been too good for Tafi over the last season or 2. But if he gets to the cobbles in a decent group, he still knows how to give it a shot. Tafi loves this race (3 podiums in total) and would love to do well again.

Team CSC’s new spring Classics head honcho showed well at the Tour of Flanders, and Gent-Wevelgem in midweek, so the form is definitely there. What Hoj has needed is the right combination of a kick up the ass and proper encouragement to make the best use of the talent he undoubtedly has. That seems to have happened since his arrival at CSC with Bjarne Riis. Keep a close watch on Hoj. All the top guys will be doing the same this year.

This is probably, secretly, George’s most important race of the season. He may spend his summers helping out some other guy in a French race, but Hincapie’s heart belongs to Paris-Roubaix. He’s been getting closer and closer to the ‘big result’, and after missing out through illness last year, he’ll be desperate to succeed. USPS might just about be able to back him up this year, but the loss of Ekimov is a blow. Hincapie’s best hope might be that really bad weather demolishes the Telekom/Lotto-Domo/T-Mobile teams – if it doesn’t, he’s too much of a danger man to be given free rein.

Franky suffered an untimely puncture and slipped out of things at the Tour of Flanders last weekend. He’ll hope for better luck on Sunday, even though this isn’t really his terrain. He’s hoping for wet, muddy weather which he reckons will favour lighter riders, as the big power guys won’t be able to hammer away over the cobbles. He might be better off hoping he stays upright for the Ardennes Classics later this month.

Second a couple of years back, Wesemann is a powerful rider on top form and super-confident after taking Flanders last weekend. He knows the score at P-R, so he’ll be thereabouts, with the support of a powerful T-Mobile squad. Don’t count him out, as he says he prefers this race to the Ronde.

He probably won’t win, but few riders will give it as much of a whole-hearted shot as the Big, Bald Belgian. Ludo is hugely popular and will give the fans plenty to shout about. Expect a death-or-glory, gasping-for-air breakaway attempt. If he gets a decent placing going through the Arenberg forest though, who knows what might happen?

Stuey is nursing a broken rib after a fall a couple of weeks back and struggled to get through the Tour of Flanders. If he declares himself fit for P-R, you can bet he’ll give it everything. Stuey has the power and endurance, as well as a new-found focus on the Classics, and could be a surprise on the day.

It’s going to be another cracking Paris-Roubaix, so keep it tuned to Pez CyclingNews for the highlights, the lowdown and everything in between.