After years of near misses, Stefan Wesemann has taken his first big Classics win, outsprinting 2 tiring breakaway companions, to take the 88th Tour of Flanders. It was a fascinating, if slightly strange race, as the pre-race favourites never really figured. 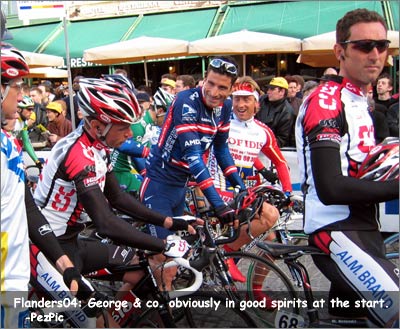 The day was bright, sunny, and cool at the start in Brugge. The fans were dressed in coats, the riders weren’t, and everyone was ready to boogie. 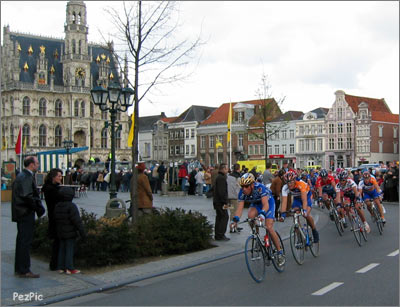 There were a couple of significant escapes, as the weather switched from showery and windy to sunny and, yep, windy. Rich (Gerolsteiner), Barredo (Liberty Seguros), Van Velzen (Chocolade Jacques) and De Spiegelare (Vlaanderen T-Interim) were chased and caught by 2 separate groups, which lead to a monster 26-man breakaway. This group was pegged at a maximum of 4 minutes.

Ludo Dierckxsens helped to split things up, as another group broke off the front of the field including the Big, Bald Belgian, as well as Mattan and Knaven.

The main field was falling away, over 5 minutes down on the leaders. The famous Oude Kwaremont climb split the leaders and left 7 men flaying away at the head of the race – Elmiger (Phonak), Hoste and Marichal (Lotto-Domo), Zanini (QuickStep), Schaffrath (T-Mobile), Ludewig (Saeco) and De Jongh (Rabobank). 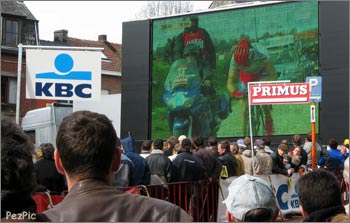 With 50 kms to go, big Ludo powered impatiently away from his group in a bid to catch the magnificent 7 at the front. Riding a huge gear, and giving it his all, he amazingly (in just over 10 kms) closed over a minute of a gap to get on, as the peloton started to sweep up behind. The crowd watching on the Muur went ape-sh*t when Ludo made his move.

All the favourites were still there, but watching each other, and this was to prove the story of the day.

Just about 20 kms from home, George Hincapie succeeded in jumping the peloton and got to the front with Van Bon (Lotto) and Ivanov (T-Mobile) – George and Van Bon had had a bit of a row earlier because Van Bon refused to help close the gap to the front. 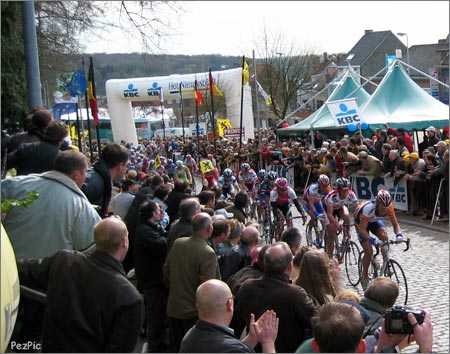 The peloton dragged themselves up to the leaders but the famous “Muur” at Geraardsbergen broke things up again. Over the top, Wesemann put in a huge burst taking Bruylandts and Hoste away. This was the final move, and although Van Bon (following his buddy Hoste), Dekker and Klier (covering for Wesemann) chased, the rest of the favourites sat back, catastrophically. They were soon over 40 seconds down and out of it.

As the front trio powered towards the finish Wesemann and (in particular) Bruylandts were doing the driving, with Hoste conspicuously hanging on the back. Bruylandts had a go at him for drafting as they went through with 2 kms to go.

Knowing Wesemann was the strongest sprinter, Bruylandts had a dig on the final little slope as the leaders headed towards the last right-hand bend before the finish. He couldn’t make an impact, and had nothing left as Wesemann swept past Hoste and celebrated his best career win.

Tellingly, there was a very cold handshake between the two Belgians on the podium, as a disconsolate Bruylandts muttered something to Hoste. His tired countryman simply shrugged his shoulders, given that he was probably shattered after spending almost the entire race out front. If there had been a bit of smart co-operation, however, Wesemann might have been out of the picture.

The first German winner of the Ronde since legendary hardman Rudi Altig back in 1964, Wesemann looked thrilled and stunned on the podium. It’s a fitting reward for the 33 year-old, who has spent his entire career within the Telekom/T-Mobile team.

Johan Museew who’d appeared on the front of the peloton towards the end finished his last Ronde in 15th place, Van Petegem was one place back with Boogerd 20th. Frank Vandenbroucke lost touch over the last berg, as did Oscar Friere.