Ciao Bella! The Azzurri Have Landed!

While Randall’s been out on the course freezing his patookas off, I’ve been heating up the wining and dining circuit with a private dinner with the Italians. Our favourite team directeur Franco Ballerini just rolled in with the team that is looking to repeat their World’s victory in Hamilton…

Monday night found me at a private dinner with the entire Azurri elite men’s team. It was organized by Giuseppe Ferrara, the Hamilton businessman and former pro who was the original driving force behind the successful World’s bid for Hamilton. The dinner was held at the ritzy Liuna, in a renovated warehouse and train station in the north end of downtown Hamilton. The city has a massive Italian community, so the turnout for the event was huge. 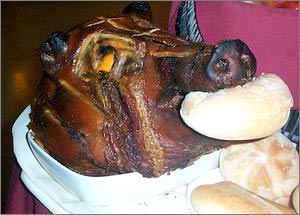 What the Azurri hope to do to the competition!

The dinner got off to a slow start. Franco and the boys were due to arrive in the early afternoon at Pearson Airport in Toronto. However, the flight was delayed by about 4 h. To top things off, the shuttle bus gave up waiting for the boys in blue and returned to Hamilton, making for another 2 h wait at the airport. Not the best way to start, and the grumbles were arising in the crowd about whether the team would show at all.

However, when they did show up, all was quickly forgiven! I haven’t experienced a mob scene like this since the last time I offered to give away copies of my exams before the test itself. Despite the jet lag and the frustrations of a delayed flight, the boys did their best to party with the crowd. Our favourite team boss Franco Ballerini (He says CIAO to the whole Pez world) looked great and wowed the crowd as he introduced the team. Just wished I had picked up some Italian beforehand to figure out what all the wild cheering was about! 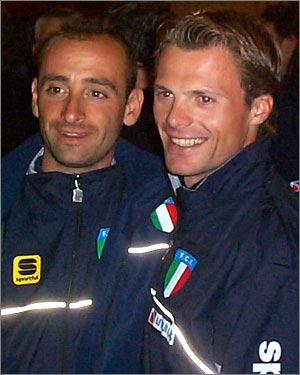 The two top dogs in the Italian pound. Bettini and DiLuca are all smiles and best of pals. With Franco in charge, I don’t expect this to be a faзade. 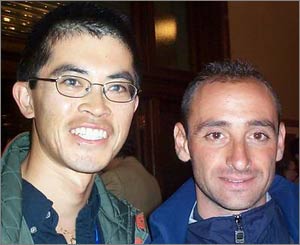 The mob scene around Bettini and DiLuca were really something else. Grown men in suits and ties more teary-eyed than teeny boppers at an N’Sync concert. 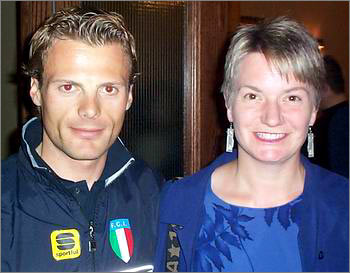 Damn he’s good looking! My wife picked out Danilo as the one rider she wanted her picture with!