Well, now that I’ve slept off the grappa from chilling with the Azurri, it’s time for the serious racing to begin. Or in my case, the serious mingling that goes on in the pit lane. Here are some notes from my safari expedition behind the lines…

Photos by Stephen and Ken Cheung

Sure it was broiling hot to the point where I risked dying an ironic death from heat stroke, but for serious star-gazing, it’s hard to beat wandering around the team pits during the time trial events. Besides all the cool rigs, the smaller number of riders makes it less crowded and stressful for everyone, which in turns makes it easier to chat with riders and team personnel. 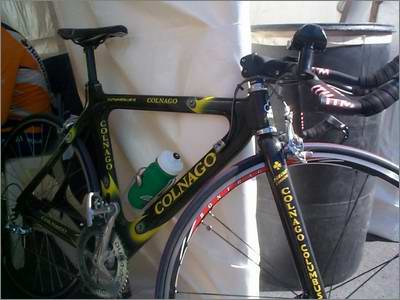 The morning saw the junior men out on the course, but with a steady stream of elite men sampling the course early in the day. Uwe Peschel and Michael Rich, the Gerolsteiner twins, looked like every bottom bracket’s worse nightmare with their massive quads. I found Levi Leipheimer and Bobby Julich at the US tent looking happy and excited. “I have hopes, not expectations,” noted Leipheimer, “but I really like the course and it’s easy to really give it your all when it’s a course you like.” 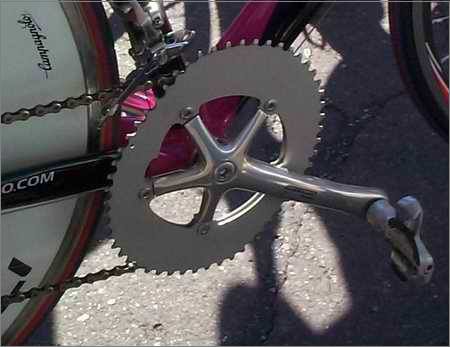 Coming full circle, to use the pun, we find Bobby trying out ovalized rings on his time trial bike. He says that they’re made by the guy who originally designed the non-round chainrings that became mass-produced by a component manufacturer whose name begins with S and ends with O. USA Cycling boss Steve Johnson was also in the pits looking pretty happy. That is, until about 2 min after Levi and Bobby rode off and a commissaire came by demanding to see their licenses before official registration closed… 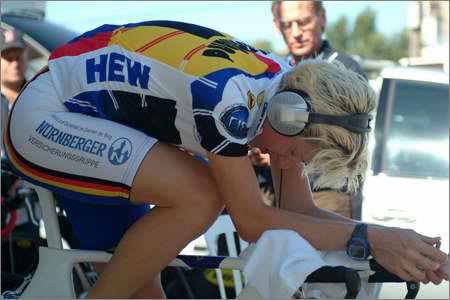 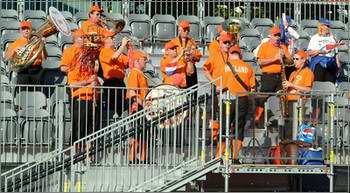 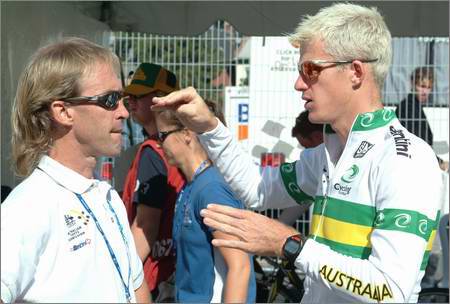 Neil Stephens is just as gregarious and cheerful as we hear about. Had lots of time to say G’day and was more than happy to chat about how the Aussies were doing. All the former pros were really easy to approach and meet, and I was starting to get pretty jaded wandering around with my press pass. Then I wandered by the Belgian tent and came face to face with Johan Museeuw, the Lion of Flanders himself, with his pal Wilfred Pieters. At that point, I had to surgically wire my lower jaw to my upper jaw to hold it in place and do my best not to self-combust in excitement. Sheesh, getting his house raided by the narc squad and getting flicked off the Belgian World’s team still isn’t enough to keep Museeuw away from cycling! 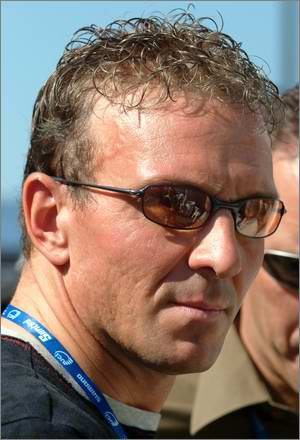 The Lion of Flanders – about 20oC warmer than his preferred weather…

So what did I learn from my day in the pits? First, cycling truly is the greatest sport in that you really can walk right up to the stars. Second, seeing somebody with the palmares of Joana Somarriba collapsing in joy as she crossed the finish line and into the rainbow jersey demonstrates just how important passion is in cycling. Third, I should practise what I preach and wear a hat and remember to drink when it’s this hot out!