Day 3 of the World Champs saw Millar finding gold at the end of the rainbow in one of the more dominating TT performances in recent history. The Pez gang spent the day catching the super-tense TT vibes, getting embroiled in yet another Italian mob scene, and catching a fantasy camp ride for good measure…

Pictures by Stephen and Ken Cheung

With the time trial itself lasting such a short time and not starting until the afternoon, I decided to spend the morning in the pits again to get some more quotes from the TT riders as they warmed up. The course was also open for training by the roadies in the morning, so it proved the perfect opportunity to catch up with some of the pros making their first reconnoiter of the course.

While I was in the pits, Ken was out wandering the early sections of the course taking pictures of the roadies training on the course. Suddenly a van rolls up and asks him if he wants to jump in for a lap of the circuit with Bauer and the fantasy ride auction winners. Forgetting what our parents told us about hopping into a car with strangers, Ken tagged along to snap a bundle of pictures. Ken says that Bauer attacked up the hill – I guess those competitive fires never quite die out.

The sight of Il Grillo just sent the crowd and reporters nuts.

If you’re short of things to do or see, you are always guaranteed something going on at the Italian tent. The entire Italian team generated a huge mob scene when they stopped to chat after going around the circuit a few times. It’s really like the circus coming to town. Needless to say, Il Grillo was the star attraction. Despite being recently Slam-Dunc’ed, Giovanni Lombardi looked none the worse for wear. I also found Bjarne Riis wandering the pits nearby, possibly keeping an eye out on his new signing Ivan Basso.

Journalistic objectivity is great and all, but an autograph from the Lion of Flanders lasts forever… 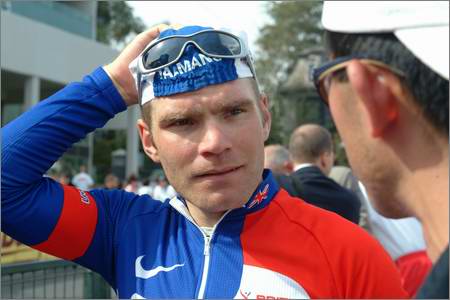 No, I don’t know what the square root of pi is to the 27th decimal. Can you ask me a cycling question instead?

With David Millar set for a golden ride, the Brit tent was all business. Roger Hammond said that Van Petegem is looking absolutely awesome at the moment and lists him as a favourite for the road race. Roger has an aunt from the nearby Niagara region, so it was a good chance for him to mix racing with family. 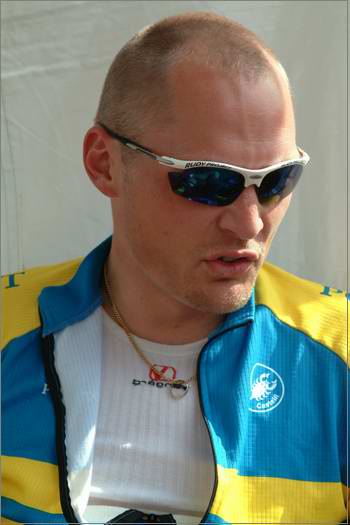 A very “strapping” Magnus before the TT. Unfortunately, those good feeling deserted the big Swede out on the course.

I found Magnus Backstedt relaxing before his final TT warmup. He has been incredibly happy with his season, and was hoping for a good showing in the TT as a final bit of icing on the cake. He feels that he is finally back to the form that saw him raging back in 1998. This he put down to a bit of maturity but mainly to being injury free for the entire year, allowing him to prepare without interruptions in form. Unfortunately, he crashed a couple of weeks ago and injured some ligaments in addition to cracking his collarbone, and was quite heavily strapped up today. Really, the level of toughness of pro cyclists never ceases to amaze me.

OK, a bacon double cheeseburger and a large slushie for after the TT. Would you like fries with that?

It’s also quite interesting the game faces that descend on race day and how it varies from rider to rider. I had a long chat with Bobby Julich about his plans for the TT and his hopes for catching a ride in Europe for next season. In contrast, the usually outgoing Levi was all business while warming up on the trainer, and was also circling in the final staging area behind the starting ramp like a caged tiger. Afterwards, he was back to his usual cheerful self, feeling that he rode as well as he could but that it just wasn’t his or Bobby’s day. Sunday’s game plan for the Americans will be no surprise, with the team 100% behind Hincapie. 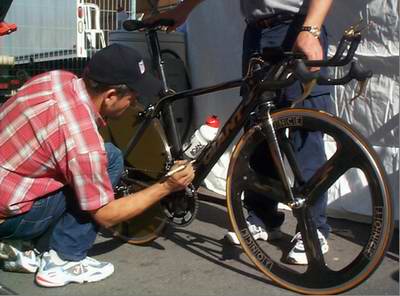 How sweet is it to be a star? Izidro Nozal’s Spanish mechanics touching up the decal work with a gold marker minutes before his start!

OK, no amount of schmoozing on my part last week could get me a picture of Millar’s new TT rig. Fair enough not to give the plot away that early, but the level of secrecy was a bit paranoid on the British side. While all the others rode right up to the start ramp on their TT machines, Millar’s mechanic brought his TT bike up to the starting area for the UCI weigh-in wrapped up in a white sheet! Should have made that a rainbow sheet! 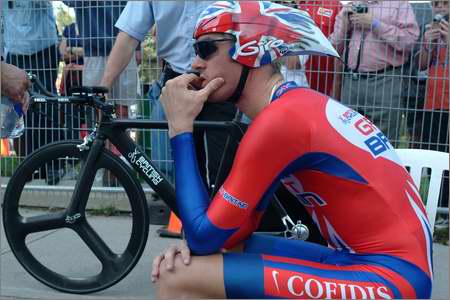 The Man and The Bike at last!

Stephen Cheung, our Sport Science and Training Editor, is currently playing hooky from his role as an Associate Professor of Kinesiology at Dalhousie University in Halifax, Nova Scotia, Canada. He can be reached for advice or comments at [email protected]yclingnews.com
Like PEZ? Why not subscribe to our weekly newsletter to receive updates and reminders on what's cool in road cycling?