George Hincapie has once again sparked several training ride discussions and/or a few words said over a beer among fans, by falling short of the podium at Worlds this year. A lot of folks, both on and off bikes, had pegged Hincapie as a pre-race favorite due to his current form, and because of the extra rest he’s had this year due to missing the punishing early season classics because of a mystery virus. Though riding an attentive, technical race, he was nowhere to be found when the penultimate break went off the front containing several dangerous race favorites, and he finished a somewhat disappointing 37th.

Although we couldn’t track George down prior to the race, The PEZ cornered him at party in Vegas on Monday nite. George told Pez: “I had a bad stomach. I felt great the week before the race, and then race day I was no good.” When asked about the race pace, George commented: “The course was tough, but not at the pace we raced it. Everyone was going easy because they expected a hard race, so the group stayed together.” 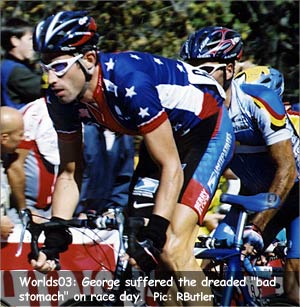 The US boys were tight lipped to the press beforehand, knowing they had to go to work for Big George on what was to be a demanding course laid out for the 2003 edition of the Worlds Road Race Championship. Under threatening skies that never managed to get their act together and really storm, the team rolled out individually to the sign in table, each of them receiving cheers from the crowd, but no cheer louder than the one that went up for Hincapie. 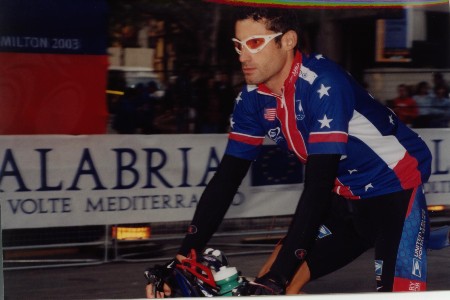 But standing near the man, watching him navigate the crowds and the cheers, one gets the feeling we haven’t seen the best of George Hincapie yet. From his close calls at Paris – Roubaix and other classics, his horrible crash at San Sebastian in ’02, to the 2003 early season illness that kept him sidelined from his usual “stomping ground” races, you would think Hincapie is cycling’s lone counterpart to baseball’s Chicago Cubs; always “close but no cigar”. But upon looking deeper, one has to think that it’s all just being a little bit unlucky. Of course, several full cycling careers can be stuffed into the Cubs span of losing years, so Hincapie’s turn for the better should be coming up fast. 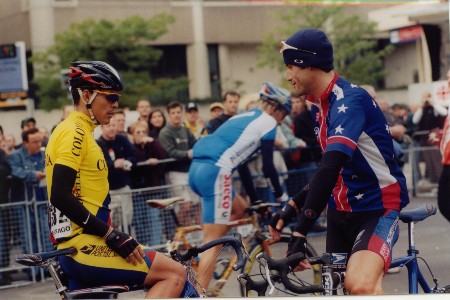 The teams around him are getting stronger, the Worlds team being a perfect example of American cycling growing without having the really big US guys on the squad (pssst, if you’re Percodan is kicking in, I’m talking about Hamilton and Armstrong), but the tough, accomplished team of euro-experienced Rodriguez, Leipheimer, and Julich was matched perfectly with the US based Horner (who rode his guts out), Lieswyn, Johnson, and Clinger, to name a few. 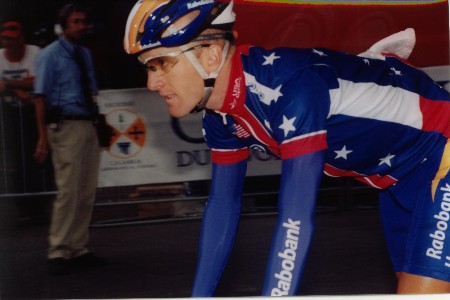 Levi gets ready to battle for George. (pic: MattMeans) 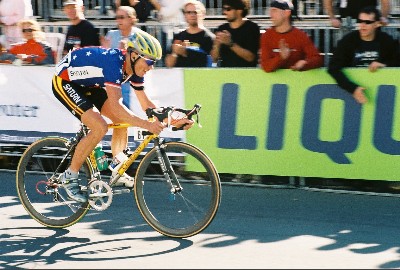 Chris Horner comes through the start finish line just as the peloton puts an end to his inspired breakaway. (pic: MattMeans)

Another shortcoming is a bit hard for his fans to take, but this writer gets the feeling that Hincapie is on the verge of some breakthrough performances in the 2004 season. With strong support of a now cohesive core of Van Heeswijk and Ekimov, and the new Belgian additions to the US Postal Berry Floor team along with the impressive Michael Barry, Hincapie should get right to the part where he can get his teeth around the neck of a race. Then all he’ll have to do is learn to bite for the kill.