The Elite Men’s two lap 41.3 km TT was the only race on the docket today (like we needed more!), with training on the road course held earlier in the morning. Bjarne Riis was here to take in the day’s events, perhaps with an eye on potential talent for Team CSC. I tried to pry a few insights out of the normally taciturn Dane. ‘Bjarne, what do you think of the course?’ “Hard” he replied. ‘Have you signed any new riders for 2004?’ “Basso” he replied. ‘Who do you like for the men’s TT today?’ “Millar” he replied. 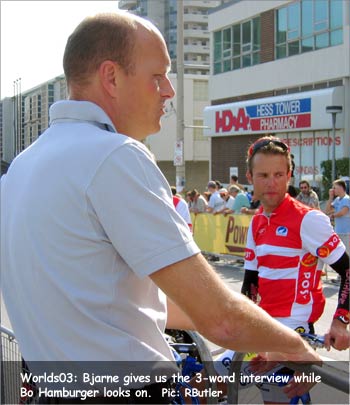 Millar himself wasn’t so sure. Although he told PezCycling News Monday that his form was very good (“Crisp Canadian Fall Greets TT Warm-up”, Oct. 6), he later confessed “I’ve felt terrible since the Vuelta. I rode for 45 minutes today (before the race) and it was the first time I felt good.” 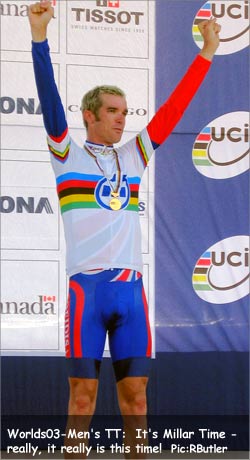 The race went off with each rider spaced at 90 seconds. I watched the first lap of the race on the 1.3 km / 6% Beckett climb. Ekimov, then Gonzalez de Galdeano, came up the hill with a display of raw power. Then Michael Rogers of Australia and Germany’s Uwe Peschel followed by Honchar and Nozal stormed past putting on a TT clinic. But the crowd roared as Scotland’s David Millar came around the bend at the base of the cote, clearly on a tear. Accelerating out of the saddle for an instant, Millar then settled into a fierce rhythm as he flattened the climb with his smooth and graceful power. The fans lining the climb knew this was going to be a special day but the enormity of Millar’s ride wouldn’t be apparent until the next lap. Millar came by a second time on what appeared to be an even faster pace. Then we waited. And waited. Millar had clearly distanced his following rider, Michael Rich of Germany.

After losing 17 seconds to Uwe Peschel at the first time check (km 8.0), Australian Michael Rogers began to close the gap. At the second check (km 20.5) the difference narrowed to 1 second. Rogers said, “Neil Stephens was in the car behind and told me I was on a good run”. By the third check (km 28.8), Rogers had gapped Peschel by 7 seconds with 12 km remaining. Then only 8 km from the finish Rogers punctured! Peschel, who started immediately behind Rogers, began to take back time. However Rogers battled bravely to hold on to his narrow margin, losing only 6 seconds to Peschel in the last 12 km despite the puncture. Peschel crossed the line half a second behind Rogers. 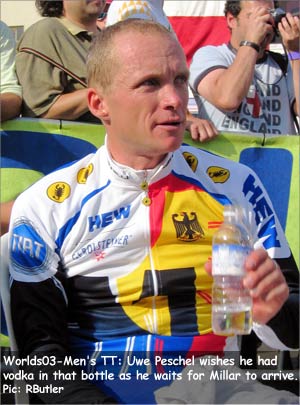 Millar, who lead at every time check, had been receiving reports throughout the course. He would later say he was able to ease off a little in the final kilometers with victory assured. Punching the air 100 metres before he crossed the finish line, a jubilant David Millar rose to the occasion – and them some. With an average speed of 48.3 kph on a course that included 6.6 km of climbing, Millar won a commanding victory over silver medalist Michael Rogers at 1:25.09 and bronze medalist Uwe Peschel at 1:25.65.

Millar, who persisted through some bad luck earlier in the season said, “I was afraid not to win. I was like a junior the last ten days I was so scared. My head might be in the clouds right now but I’m very happy”. Not one to rest on his laurels, Millar expressed his goals for the Olympic Games next summer. “ I wanted to line up at the Olympics in the rainbow jersey and I want to win the Olympics time trial as well”. With the Olympics almost a year away, tonight it’s Millar Time!