The course is open in Hamilton and the TT strongmen are already warming up. When I talked to Levi Leipheimer – who will contend the men’s race on Thursday, he was relaxing in Santa Rosa and getting ready to hit Hamilton on Tuesday. His year has for sure not been what he’d hoped for, but his form is back and he’s ready to rock…

Regardless of his year so far, which came to a screeching halt in the Stage 1 crash at Le Tour, things are looking up for Levi. He’s re-signed with Rabobank for next year, his form gradually improved through the Vuelta, and says he now feels “pretty good”. He’s there to concentrate on the TT, but will also support George Hincapie in the road race. (Levi reports George is very motivated by the way…) 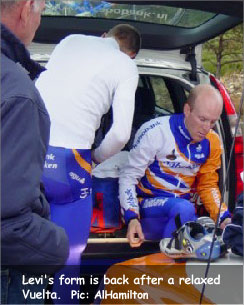 Let’s Talk Vuelta
The crash in Montgeron resulted in 2 weeks off the bike, but Levi was eager to get back in the saddle, and admits he “came back to racing probably too quickly” to reach top form for the Vuelta. In fact he only got in a couple of short stage races prior to his return to the grand tours, and reflects that “it might have worked if we’d had 10 flat stages, but the second stage had a 1st category (climb) in it, and it was too hard in the beginning.”

How did you stay motivated through the Vuelta, considering your lack of form?
“I’ll admit it was really hard and when we got to the Pyrenees I kind of hit a low point.” He kept digging, but was dogged by a bad stomach and sore Achilles tendon. “My morale was pretty low there, so I kind of just let go and started to relax and do a few stages as easy as possible… coming in with the last group and doing the minimum. The we got to a rest day and I started feeling better.”

Things began picking up – he scored 9th in the second TT, and felt a lot more in the hunt on the huge climb to Sierra Nevada where he finished 17th at 1’38”.

How does the Vuelta compare to the Tour?
It’s a completely different environment. The Tour of Spain is always faster average speed because … the roads are big and smooth, there’s more wind, which unusually always seems to be favorable (laughter), the stages are shorter and the riders always attack from the neutral banner. There’s climbing everyday in the Tour of Spain, there are almost no flat stages, in the Tour you’ll have true flat stages, but in Spain even what they call a “flat“ stage will still have a couple of pretty decent climbs…”

Is the Vuelta more “fun” than the Tour?
“The Tour of Spain is more relaxed, but I think that’s in a sense… outside the race. When you’re in the race you have to be paying attention. The fight for position is definitely not as hard as the Tour de France – the roads are bigger (in Spain), not as many small villages or winding little roads. In the Tour it’s a bigger spectacle so the stress level is higher, but they’re both fun.”

Okay, but is it even really “fun” to ride a 3 week stage race?
“Yes! Of course but there’s many emotions and layers to the race… sometimes it feels like such a huge undertaking, you’ll be in the 3rd week and you’ll think back to the start and it feels like a year ago! Which is good because in life time goes so quickly that it’s nice to be in a place where it’s taking a long time.”

What did you do after the Vuelta – big team party?
“No, we crossed the line in Madrid, got in the car after 30 seconds, and went to the hotel so everyone could shower and make their flight. That’s what we did anyway – we all want to go home you know?”

Ready For Hamilton
“I’m excited about the Worlds. This is my 3rd Grand Tour, and the first two I was racing for the GC, so when I finished I was dead…especially after the Tour last year – I was done for the year – I never felt the same again. But this year, after Spain, the day after the race I felt better than I did the entire race. I got to do such a different race this time around. Like I said there were days where I just did the minimum and just tried to build form more slowly and I was much more relaxed, I didn’t have to fight in the front all the time, I didn’t have to worry what happened. So for the Worlds it’s perfect.”

“It was important to finish the Tour of Spain for the future as well, you need to do one big tour every year, especially if you’re a classification rider.”

You’d think he’d be a bit more tense heading into the last race of the year after a season that like this one, but he’s chill’n. Levi feels so good about his form that since Spain he’s done only a few days of fairly easy riding to stay tuned for Hamilton. “The main thing is to freshen up, stay loose and relax.” One thing is for sure, bet on Levi as a man to watch this Thursday…

Thanks for talking to us Levi and good luck in Hamilton–!

“Thanks – and keep up the good work on the website!”

ToolBox: Be A Better Racer By Next Spring