For those of you who caught the finish of the Junior women’s road race, you may have seen Silver medalist Irina Tolmacheva from Russia bounce off a photographer and crash after the finish line. Well, the photographer happened to be Pez photographer (and my brother) Ken Cheung! Here is the Pez-clusive story of his “brush” with fame (or is that infamy?)…

Pictures by Ken and Stephen Cheung 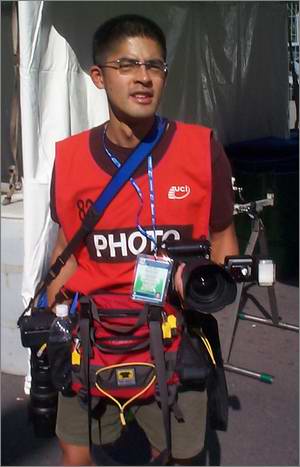 Anesthesiologist by day, sport photography junkie on demand, making for a nice brotherly reunion at the Worlds.

“I’m normally an anaesthesiologist in Calgary, but I’ve followed my passion for both cycling and sports photography as a hobby for the past decade plus. I’ve shot at the Queen’s Park crits in Toronto the Gastown Grand Prix in Vancouver, and the SF Grand Prix. I’ve also shot at Davis Cup tennis matches and speedskating world championships. So while I’m doing this for fun, I’m not a total amateur at big events. 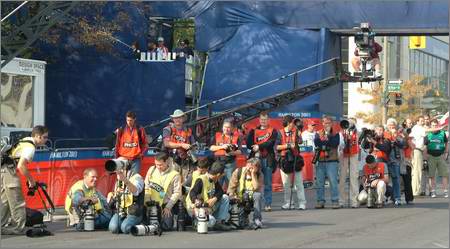 This is how the photographers are typically lined up on both side of the road.

“For those of you wondering how the press scrum is set up at the finish of a typical race, the photographers are lined up in a V-shape up to three rows deep, with the rows ranked by priority (yellow bibs first, red (me) second, and green rows third). The rows are set up on both sides of the road with a big gap in the middle where the riders are supposed to funnel through. There is sometimes a gap between the photographers and the barriers on either side, but the riders are not supposed to go that way. Where the photographers stand is really strictly regulated and supervised by the UCI Press Chief. 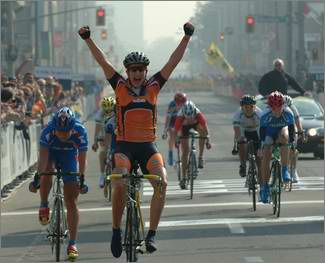 Loes Markerink (winner) and the rest of the peloton flying past the finish and towards the shooting scrum. Irina Tolmacheva is on the left.

“Most of the photographers were lined up on the opposite side of the road from me for sun reasons. However, about eight of us were on my side. When the pack sprinted across the line, I was shooting with my digital camera, and had my film camera slung across my back to my left. I caught some good pictures of Markerink going by on my right through the funnel. Then suddenly, I felt something or somebody smack hard against my camera. Then there was a crash and then all pandemonium broke loose. It was only then that I realized the Russian rider either hit me and fell or else hit something else first and bounced into me. She ended up with only some road rash, luckily. 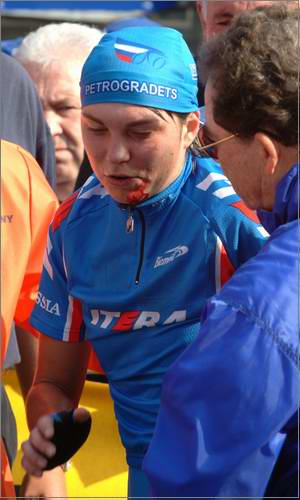 No rainbow jersey for you, Irina, but have a nice little raspberry instead…

“What seems to have happened was that Tolmacheva started going through the funnel of photographers, but then for some unknown reason decided to swerve to get to the barriers in between the first row of photographers and myself. 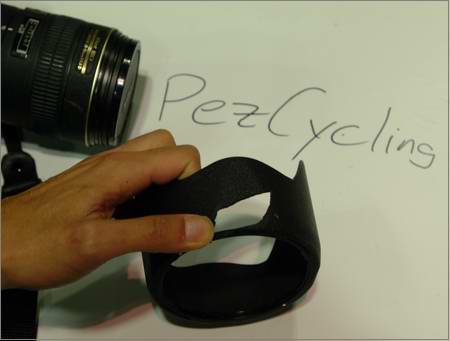 Pez casualty count: no road rash but a nice big chunk taken out of a lens hood

“I felt awful about the crash, of course, and was petrified that I was somehow to blame. However, the Press Chief Enrico Carpani was right there, and told me that I was standing in exactly the proper position and that I was in no way at fault. I spent most of the day during the U-23 race with professional cycling photographer Casey Gibson, who also reassured me that I was fine and that the Junior women are often completely inexperiencd with any kind of media coverage, so have no idea how the photography rows work. Sometimes, crashes also happen when photographers move a bit involuntarily and “fake out” the cyclists. He also said that Carpani would have ripped off my bib without any hesitation if I was at fault. Well, I may have a big hole in my lens hood, but I still have my bib!”