The Worlds may be done for anther year, but the Pez-Crew’s gold medal performance – finding & reporting the stories no else cared or dared to – will live on forever! We split the crew into “special-opps” teams, to get in – and out – with the snooze-you-lose-news only we could find. Dave Aldersebaes & Matt Means completed several successful forays…

Being that your favorite cycling writers at PezCycling News have real jobs and lives with which they support themselves, any one of us living in the North American continent knew that being at the Worlds, held this year in Hamilton, Ontario, was perhaps a once in a lifetime possibility. Having a shot at having press creds, meeting the rest of the Pez guys, and it being only an 8 hour drive from the city of Chicago made it a no brainer for myself and my colleague/teammate, Matt.

Now home, the reality of what has transpired over the last few days is truly setting in. Having the pictures in my hand doesn’t even make it seem that real. The whole experience still hangs out there like some kind of dream you don’t want to wake up from. The sheer power of international cycling and its members in front of our faces, or later in the evening sitting down the bar from us, or in the hotel lobby milling about. USA rider Tim Johnson said that at his first Worlds last year, his eyes were “as big as silver dollars”. 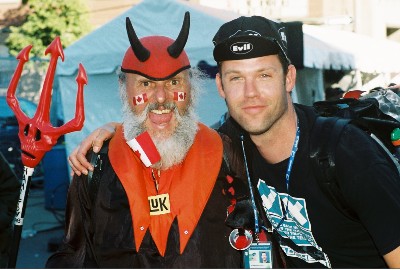 Having done my first this year and having full press credentials and thereby unlimited access, I can empathize. Not that I could imagine actually competeing at this level, but to be there and rub shoulders with these guys was something else.

And a major plus was hooking up with the Pez team on site of the brothers Cheung, and Randall Butler. Traveling with me from Chicago was budding photgrapher and cycling teammate Matt Means. The pro photos all were up to Randall Butler and his great eye and great gear, but we like to think we got some good, candid stuff. Here’s a couple of yucks for you, from the perspective of a fan. 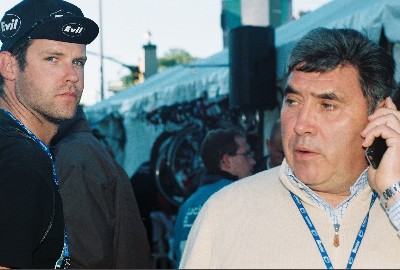 Another true “ha ha”. I think Eddy was slightly miffed, though I made it quick. The picture is the exact moment he realizes he’s being photgraphed with a 6 foot 5 giant over his shoulder 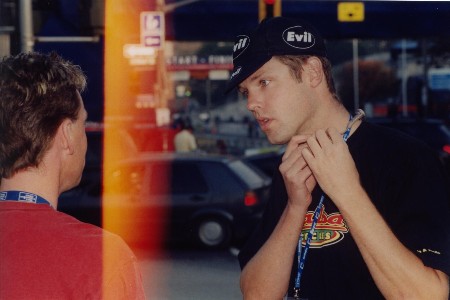 Both Stephen Cheung and I were interviewed on separate Canadian TV channels at separate times. Here’s a shot of the the quick briefing I received before doing 7 minutes of live TV, the result being total pimping of the name of PezCycling News.com to the world! 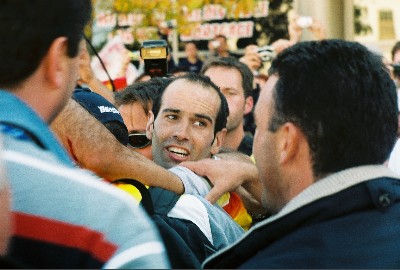 Here’s an up-close of Igor after the win.

Cycling Stars – Shining & Falling
From the shocking news of Jeanson being declared unfit to start, to the sheer tenacity and heart of the junior riders riding their guts out, to the mental chess game of the elite TT, culminating with the grand spectacle of the mens elite road race, all facets of the diamond of Worlds shined brightly on Canada. Of course, the crown jewel of the 5 days was the men’s elite RR; with all the hoopla surrounding the Italian squad, the heavily partisan response to both the Canadian and US teams, the impressive collection of the Worlds best, riding for their countries and sometimes unrecognizable at first in their international kit. Eddy Merckx milling about the Belgium tent, bumping into Erik Dekker and saying “excuse me” to him in Dutch, discussing the weather with John Lieswyn, it was all quite intense. The mens race and the thrilling finale of Astarloa’s attack was amazing. 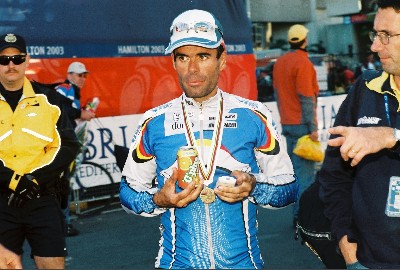 For Matt and myself, it was our first trip to Canada. This of course added a special aspect to our trip to Hamilton, as we were able to take in the wonderful hospitality of the Canadian people, and see some of their sights. The city of Hamilton itself had done a fine job of organizing around the race, and everything was incredibly easy to get to. While other friends of ours were parking in “Lot C” about 30k from the course, we had no trouble finding parking lots two blocks from the start/finish for $10 Canadian. The grandstands and jumbotrons allowed all fans great views of the racing when the cyclists were elsewhere on the course. Up on the hills were some great tents serving foods from all over, and easy access to the rest of the course, with the exception of the hellish climb up what seemed like 1,000 metal stairs to the top of the St. James Hill.

The Pez team kicked all kinds of ass in covering the race for you folks, we hope you enjoy what you’ve seen so far, and what’s still to come.