Wanna ride the World’s course in Hamilton? The PEZ World’s crew recently did a few tours of the circuit to see what we can expect on October 11 and 12 when the world’s top pros come out to put the hurt on each other in the year’s most prestigious one day race…

The Hamilton World Championship Road course is selective. Each 12.4 km lap features two climbs and only about 5 km of flat road. With over 4,000 meters of elevation gain in the men’s 21-lap 260 km course, it will be a strong rider who wins here.

The course starts in front of Hamilton city hall with a false flat for about 500 meters. The road turns left for another kilometer before reaching the base of the first test – the Beckett Drive climb. This is the shorter of the two climbs at only about 1.3 km in length, but the narrow winding road with its steeper and uneven gradient makes this an opportune place to attack. 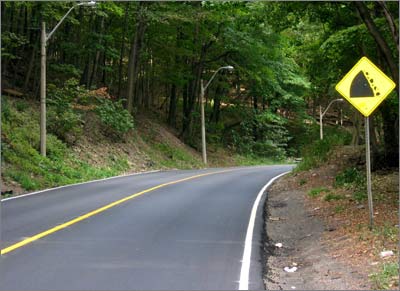 The top of the climb is followed by a 2 km flat as the road loops around to the first descent of the Claremont Access road. This is a 2.1 km descent at 6%. I freewheeled from the top and easily reached 60 kmh. I expect race day will see the 53 X 11’s in action with substantially higher speeds down this straight, wide descent. 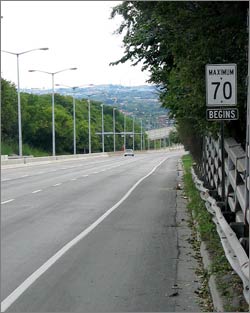 At the bottom of the descent there is a short 300-meter loop before returning to climb the 2 km back up this divided road. The steady and not too steep gradient here lends itself to power climbers. This is an important climb as it is immediately followed by a fast narrow descent to the finish line. The day’s decisive attack may well come on this climb.

Claremont climb – aaand back up we go!

At the top of the climb the road does a hairpin turn before making a final descent of about 1.7 km down James Mountain Road toward the start / finish. I quickly reached over 75 kmh on this descent just freewheeling from the top. 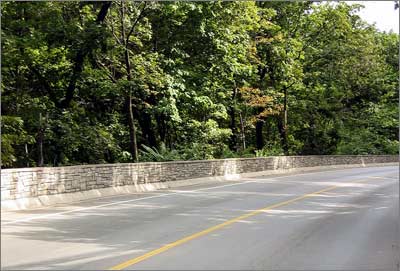 The narrow road combined with a hard left-hand curve just before the bottom will force the peloton to line-out early in the race. However it could be decisive later in the race. At the bottom of the descent the road makes a 90-degree left turn, leaving the riders just under 300 meters to the finish line. No lead out trains here – this will be a dramatic finish if left to a sprint.

After riding a few laps of the course it occurred to me that these were the roads where local boy, and Canadian cycling legend, Steve Bauer spent his formative years as a rider. No wonder it’s such a demanding test! The Hamilton parcours is difficult, but balanced. The climbs aren’t long enough or steep enough to favour the pure grimpeurs. However there is a lot of climbing during the day and a relative absence of any long flat sections. If a few climbers get away they could have a playday. The course also sets up well for classics riders capable of repeatedly powering up demanding climbs. Anyone hoping to win here will need to bring their best form. This course will provide a great display of racing and should crown a worthy champion.

Stay tuned to PezCycling News for more World’s updates as they happen!