Holland continued its medal sweep at the World Cycling Championships taking Gold in the Junior Mens Road Race and Silver in the Elite Woman’s Road Race. The cycling powerhouse has now captured seven medals in total with the Elite Mens Road Race still to go on Sunday. 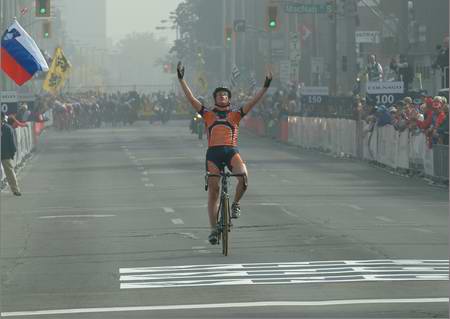 The Dutch team planned to protect Junior Mens rider Sebastien Langeveld. When the winning break went, Reus joined thinking the break wouldn’t hold. No one would answer Reus’ attack on the final climb up the Claremont as he rode away to a solo victory. Anders Lund of Denmark said Reus was “too strong, the right winner.” Lund, who won the sprint finish for silver ahead of Lukaz Fus of the Czech Republic, said, “I knew it was important to be in front in the last corner. That was the plan.” “I was first in the group in the last kilometer. It was just straight ahead. It was very hectic, you hadn’t much time to think about it.” Reus completed the 123 km course in 3:01 for an average speed of 41 kph. 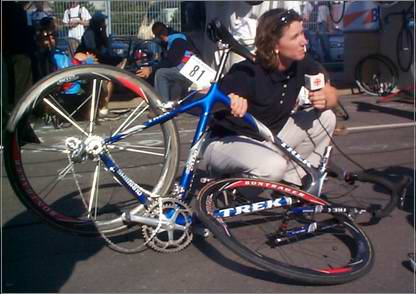 All the king’s horses and all the king’s men won’t be able to put Kevin Lacombe’s Trek back together again. Our thoughts are with Kevin, who is currently in critical but stable condition following a crash on James St. descent.

Canadian rider Kevin Lacombe was hospitalized as a number of riders were involved in a crash on a descent during second lap of the race. His condition is currently critical but stable, and he is expected to make a full recovery.

Ooops She Did it Again

The womens 124 km race was a hard fought race of attrition. Joana Somarriba, Gold medalist in the TT, and Jeannie Longo were at the front of the peloton early in the race pushing the tempo on the climbs. After five laps racers began dropping off the back as the relentless tempo took its toll. With less than two laps remaining and immediately after catching Nicole Cooke’s breakaway, Longo launched an attack on the flats of Fennel Ave, quickly taking 15 seconds on the lead group of riders. 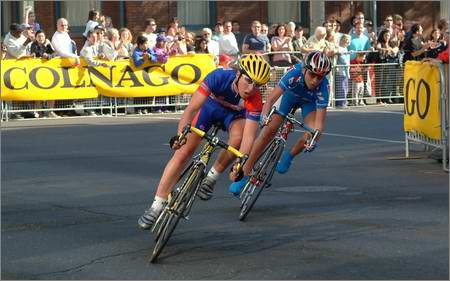 Nicole Cooke of Great Britain takes off on a flyer with 2.5 laps to go.

Mirjam Melchers later said, “I was worried right away – there was no reaction from the peloton.” This is exactly what Longo, drawing on years of racing saavy, was hoping for. She continued to power her way around the course with a smooth tempo, clearly riding for the win. Melchers continued, “When the gap wasn’t closing I was becoming nervous. We weren’t chasing. I had to make a choice – otherwise she would be sitting here (on the podium). I think we only caught her in the last kilometer.” 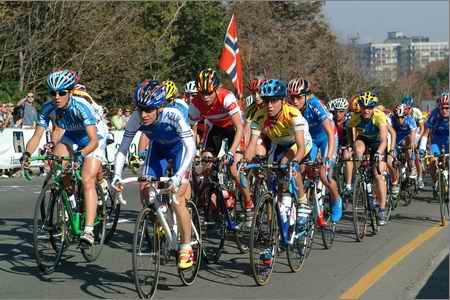 The ageless Jeannie Longo showing the young whippersnappers how it’s done. Her attack with 1.5 laps to go got reeled in right at the last corner before the finish.

With Melchers and Cooke doing most of the work, Ljunskog said, “I had 5 riders to watch (Brandli, Arndt, Melchers, Somarriba, and Cooke) and Longo wasn’t one of them. Miriam and Nicole were doing a great job out there and I know I have my tactics clear. That’s the game today.”

Let’s Get Together: Ljunskog and Melchers had a touchy-feely moment together at the finish line.

The sprint was a thriller with five riders crossing the line within a bike length. Ljungskog and Melchers brushed at ten metres but there was no infraction called. When the judges reviewed the photo finish, it was Ljunsgkog just pipping Melchers with Cooke, fatigued from the chase, taking third ahead of former world champ Edita Pucinskaite.

Ljungskog said the sprint was fair but really difficult. “It’s a little bit short for me (300 metres). I had Mirjams wheel and I just go for it. I wasn’t sure I won. I’m in shock. I win it, ya – I can’t believe it.”

With such a narrow margin of victory after 3 hrs 16 minutes of extraordinary racing, cycling fans are already talking about a rematch. Good for us that each of these ladies spoke of their desire to win at the 2004 Olympics. Ljungskog said “The Olympics are only every four years so yes, it is an important race. It would be a dream to win that and it is my goal to be first there.” Cooke added, “the Olympics are one of the biggest things you can win in sport and I will be going to win.”

See you in Athens?