It was Germany 2, Holland 3 in the Junior Women’s and Men U-23 Time Trials today. The races were run under sunny skies and seasonably warm temperatures. Racing began with the first woman departing the ramp at 11:00 local time.

Earlier in the day I stopped by the Dutch pits to see how the team felt about its prospects. The coaches were confident as they predicted a good chance for podium finishes in both the women and men’s events. They weren’t to be disappointed as the Dutch ladies were to capture silver and bronze shortly thereafter. 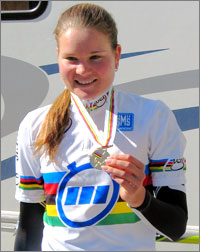 Iris Slappendel of Holland held onto her interim lead until Germany’s Bianca Knopfle crossed the finish with the day’s fastest time – 22:17 over the 15.4km course for a sizzling average speed of 41.4kph. Impressive considering the route includes a 1.3km climb at 6%. With Slappendel distanced by 30.9 seconds the German rider waited anxiously near the finish as her minute rider Loes Markerink of Holland was still on the course. The Dutch rider finished 16.5 seconds behind Knoppfle’s time and Germany claimed the first medal of the world championships.

I had the chance to catch up with the Bianca (German Junior TT champion and now World Champion!) after the podium ceremony. Her final preparations for the Worlds began at her home near Friebourg three weeks ago after competing in the World Mountain bike Championships in Lugano. Friebourg is the home of another famous rider better known as Jan Ullrich. Knoppfle described the hilly area around the Black Forest where she trains as being similar to the Hamilton parcours. In response to a question, she replied that no, she doesn’t train with Jan Ullrich. After seeing her put the hammer down today, I’m not so sure. 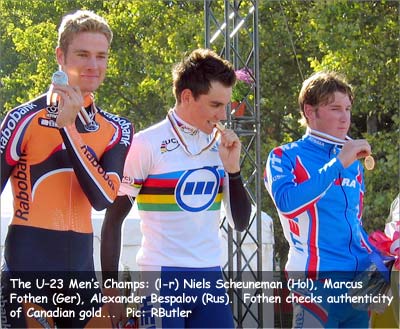 The men were off at 12:20 as the wind began to pick up on the slopes of the Niagara Escarpment. The route was two laps of the course for a total of 30.8km. German rider Marcus Fothen had the fastest first lap. Seventh in this event two years ago and fifth last year, when Fothen heard that he had the lead he decided it would be “all or nothing” for the title. He crossed the line in 38:35 for a blistering average speed of 47.1kph. This pushed Niels Scheuneman of Holland into second place at 18.9 seconds. The pair waited anxiously for Alexander Bespalov of Russia who would cross the line at 22.2 for the bronze.

The riders noted that the wind had been a factor in the race with a headwind going up the climb and a tailwind leaving them under-geared on the descent. Fothen said he had a ‘good feeling today on a hard track’ but found it difficult to find a rhythm on the hilly parcours. However, having recently signed on with German pro team Gerolsteiner gave him a sense of calm as the German rode to victory claiming his countries second World Title today.