Loes Markerink was happy with the silver medal she earned in the Junior Women’s TT on Tuesday – but not happy enough. Friday morning she claimed gold in the Junior Women’s Road Race unleashing a powerful sprint over 300 metres to nip the other 10 riders in the leading group. Closing a down small gap Markerink said “ there were two ahead of me and I knew I had them in the final corner and I could win. It (the sprint) was a race, it worked good and I won”. The Dutch rider was able to open half a bike length into a slight headwind and Russian Irina Tolmacheva was unable to come around. Tolmacheva said, “she was too strong” in describing the finish. The winning time was 2:05:39 over 74.4km for an average speed of 35.5kph. Tolmacheva took silver and Sabine Fisher of Germany bronze, all at the same time. 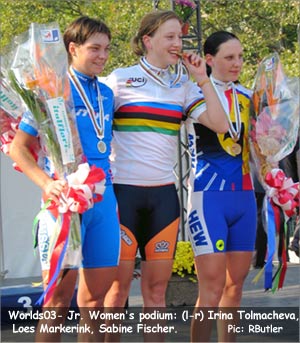 The German team had planned to ride an aggressive race to narrow the peloton in hopes of setting up sprinter Bianca Knopfle, winner of the TT Gold Medal. The tactic worked as both Knopfle and Sabine Fischer were in the final selection of 11 riders. However, today was Fischer’s day as she held on to take the bronze with Knopfle in fourth. Audrey Lemieux of Canada finished 19th at 32 seconds. Sixteen of the 58 starters abandoned the course.

After competing at Zolder last year, Loes Markerink was looking for a top ten finish. With the World Championship results counting heavily toward signing with a top Dutch squad for 2004, team mangers said after the race Markerink’s prospects look good. 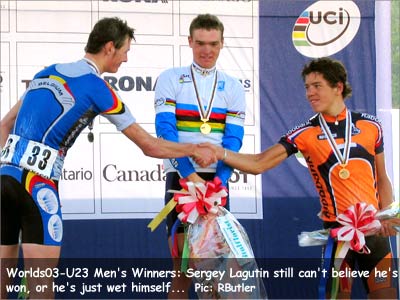 Riders lined up for the Men’s U-23 road race today run over 172.2km. The race was ridden conservatively until the fourth lap when attacks started sparking off the front. The peloton began lining out along the top of the course with riders being peeled off the back. After 10 laps of the 12.4 km route a large peloton was still intact with a number of riders dropped. With 2 laps to go a break had formed taking 15 seconds on the main group. With the break working well and the peloton hesitant, it looked like this would be the winning move. By the final lap a small chase group including U-23 TT champ Marcus Fothen of Germany formed closing to 17 seconds, with the main bunch now distanced at 30 seconds. 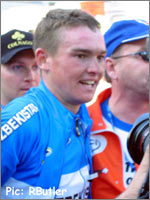 On the 2.1 km Claremont climb, Fothen decided to make his move. The powerful rider began to bridge over from the chase group. One of Europe’s top Junior riders last season, Thomas Dekker of Holland said, “my legs were not good but I had Fothen’s wheel”. Known as “The Hulk” for his strength, Dekker held on as the two rode across forming a lead breakaway group of 9 on the final descent.

The crowd was on its feet as it saw it was about to witness the second sprint finish of the day. Belgian rider Johan Van Summeren was first through the corner. “I was too soon in the last corner. I was in the wind too fast – he passed me in the final 50 metres” Van Summeren said referring to Sergey Lagutin’s winning sprint. Lagutin added he “had been looking for the right spot in the last 200 metres.” Fourth in last year’s world championships in Zolder, the rider from Uzbekistan said “I kept racing and waited till the last moment”. Lagutin took the gold in 4:14:05 (with Van Summeren silver and Dekker bronze.