With the elite men and women’s road races to go Saturday and Sunday, the teams were out on the course for a 1.5 hour course reconnaissance Thursday morning. As many of the racers, coaches, soigneurs and managers congregated around the pits it was an opportune time to sneak a few predictions from those in the know.

Since Bjarne Riis wasn’t looking beyond the TT in his three-word interview with PEZ (see It’s Millar’s Time – Big Time! Oct 9), we asked Danish rider Bo Hamburger what he thought. “The course is hard. It seems easy the 1st lap but after you go around a few times it’s hard.” Australian Matthew White, just back from a strong ride in Paris-Tours was more colourful – “its F—-n hard”quipped the bottle blonde Aussie. And that pretty well sums it up. 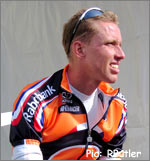 No one is predicting a bunch sprint and the only debate seems to be whether it will be an early attack that stays, or if the eventual winner will be one who conserves early in the race. Both Michael Boogerd and Axel Merckx said “the course is good”, although Axel was just as happy to talk about the house he and his wife are building in Canada’s Okanagan Valley. 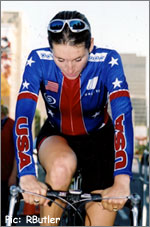 Over on the women’s side, American rider Tina Mayolo described the course as “very hard with no recovery. The race is likely to go hard where there are flats minimizing any chance of recovery.” Tina said the USA has a strong squad for Saturday. When I mentioned teammate Dede Demet-Barry’s 8th place in the chrono, Tina commented that Dede is really rocking right now. Dede is somewhat of a ‘local rider’ with her husband Michael Barry coming from nearby Toronto. Michael, who just completed a successful Tour of Spain with the US Postal Service, was mentioned by course designer Steve Bauer as a rider with possibilities for Sunday. 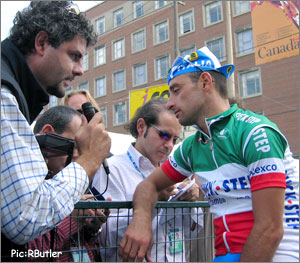 But for a few predictions, who better than the classic king himself, Johan Museeuw, the Lion of Flanders. Museeuw quickly listed his four favorites with Freire, Bettini, Valverde and Bruytlands. He repeated the order for me so I took good notes. I asked him about George Hincapie’s chances. “It’s a circuit for him but I don’t know his form. If he is in good shape he is a favorite but I don’t know if he has prepared really well”. (ed note: George reportedly left the Tour of Spain to focus his preparation on the Worlds). Museeuw said “the course is difficult but it’s normally difficult, no?”