There was a noticeable increase in the excitement level in Hamilton today as the Elite Women’s TT was to go. With a start list including reigning world TT champion Zoulfia Zabirova, world road champ Susanne Ljungskog, Tour de France Feminin winner Joane Somariba Arrola and the legendary Jeannie Longo-Ciprelli, the crowds lined the course early in anticipation. The first rider was off at 2:10PM local time under sunny skies and warm temperatures. 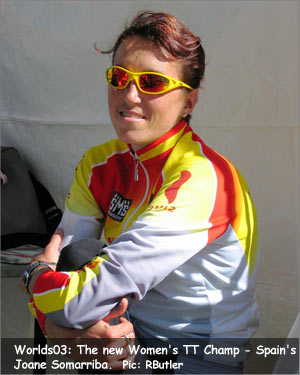 With most of the women focused on their pre-race preparations we were lucky to find Joane Somarriba Arrola relaxing in the Spanish pits. Finding a mutual language connection in Italian, Joane described the route as ‘a beautiful course but difficult’. She said that she preferred her chances in the road race to the time trial noting that she is more of a climber than a time trial specialist. She picked Germany’s Judith Arndt and Russian Zoulfia Zabirova as riders to watch.

Pushing a 54 x 11 on the descents, Canadian phenom Genevieve Jeanson blistered the course in 29:11 as Canadian fans cheered her around the 20.5km route. Finishing in provisional first place with only12 riders to come, Genevieve told the media throng that every athlete dreams about winning a world title, especially at home. However she quickly pointed out that the race wasn’t over with a number of great riders still on the course. Her time stood up as Pucinskaite, Ljungskog and Longo crossed the line. Then Judith Arndt and Karin Thurig of Switzerland crossed the line pushing Jeanson into provisional third place.

Out on the course Joane Somarriba was ‘giving it 100%’ in the windy conditions. Leading after the first time check she said she didn’t think about the finish. Only in the final kilometers did she realize she had a chance for victory. Crossing the line in 28:23 for an average speed of 43.9kph Somarriba was in the lead, Judith Arndt second at 10:7 seconds and Zabirova still on the course. When Zabirova crossed the line for third at 25:2 seconds Somarriba was overcome by emotion. ‘Only in the final kilometers did I realize I had a chance for victory’ she said after the race. Joane began her preparations for the worlds in June with dreams of a podium finish. Known for her climbing ability, the lady from the Basque country began training hills and flats to prepare for a race ‘using strength and agility’. ‘I suffered a lot in the last kilometers but it was worth it – this is the best day of my life’ she said.

Judith Arndt, silver medalist and winner of the recent Grand Prix Feminin International du Canada, said she was beginning to feel the fatigue of her 7 month season but remained optimistic for the road race on Saturday. Bronze medalist Zoulfia Zabirova said that she had done everything she could today and was happy with her effort, but the hilly parcours was not best suited to her strengths.