Race Report: On a day when the biggest challenge was the all-consuming heat it was that other German sprinter who powered into the ancient city of Córdoba and took the win for Giant-Shimano. John Degenkolb has every reason to love Spain and will be looking for more wins in this year’s race.

Magnificent Michael Matthews (Orica-GreenEDGE) put his team to work yesterday in a bid to win the stage into Arcos and in so doing took the Red Jersey of overall leader off the shoulders of Alejandro Valverde (Movistar). Could he do the same today on the run-in to Córdoba? It was possible but he would have to overcome two things: Nacer Bouhanni (FDJ.fr) who just lost out on the uphill finish yesterday and the heat!

Racing towards the old city of Córdoba meant another day of intense heat, as Córdoba is one of the hottest spots in the whole of Spain in the height of summer. With no sea breezes to cool down this part of Andalucía it’s small wonder that the Moors felt so at home…but riders more used to northern European weather were suffering and going through huge quantities of liquid.

The stage today was relatively kind to begin with and featured an almost flat run-in before the 3rd Category Alto de San Jerónimo before coming into Córdoba itself. The riders then headed out to tackle the Alto del Catorce por Ciento (imaginatively and aptly named the climb of 14%) before heading into the finish back in the city. With a sharp left-hander coming within the last 2km and a right/left kink at 500m it looked to be another stage for the sprinters who had survived the last climb and who could take advantage of the slight uphill finish. Bouhanni was keen to make it two but it could favor Matthews again or Dan Martin (Garmin-Sharp) who narrowly missed out yesterday. 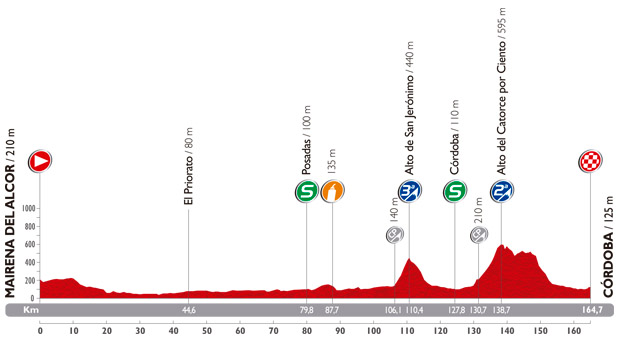 Here’s how the stage played out:

Today’s Break, Second Attempt for Javier Aramendia
With the downhill start from Mairena del Alcor it was the former Euskaltel rider Aramendia (Caja Rural-Seguros RGA) who initiated the break and took three others with him. He was joined by Sébastien Turgot (AG2R-La Mondiale), Jimmy Engoulvent (Europcar) and Gert Joeaar (Cofidis) and they quickly gained a lead of 4 minutes but as the bunch got themselves organized Orica brought that back to a more reasonable 2:40.

And that’s how it stayed, as the peloton was content to let the break clear the road in the searing heat. They were all keen to conserve energy for the climbs later in the stage. With temperatures sitting at 36 degrees and threatening to nudge up to 40 degrees by the finish nobody wanted to be a hero this early in the day’s proceedings.

Through the first sprint at Posadas at almost half distance and it was Turgot who took maximum points followed by Joeaar and Engoulvent. The gap was sitting around the 2:30 point but with the feed-zone coming just 7.5km later the gap would stretch back out a little. Everybody would be especially careful to grab their musettes with care today after Movistar made the mistake yesterday that saw race leader Valverde on the ground and two other riders struggling in behind the bunch. 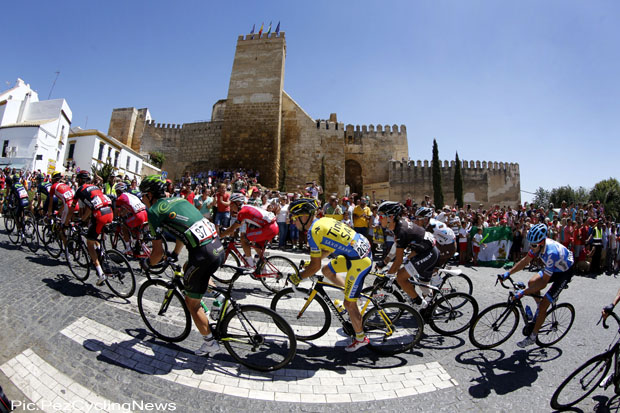 The peloton eventually started to chase down the escape

Jerónimo!
Approaching the first climb of the day and the peloton was beginning to take an interest and sort itself out for the racing ahead. The gap to the leaders was coming down and was sitting at 1:50 as the bunch began to form a long line.

Onto the narrow road of the Alto de Jerónimo and the GC teams were pushing for a good position but it was still Orica tapping out the rhythm. Up ahead, the gap was dropping like a stone and was now down to 30 seconds with Turgot losing contact with the other three. Engoulvent wanted to push on but he wasn’t getting a lot of help unlike Orica who had been joined at the head of the bunch by Sky.

As it was just coming back together another former Euskaltel man, Amets Txurruka (Caja Rural-Seguros RGA) rode off the front and went past the surviving leaders as he hunted down the KOM points at the top of the climb. At the back of the bunch French hero Thibaut Pinot (FDJ.fr) was having trouble hanging on as he’d had a spill earlier on. 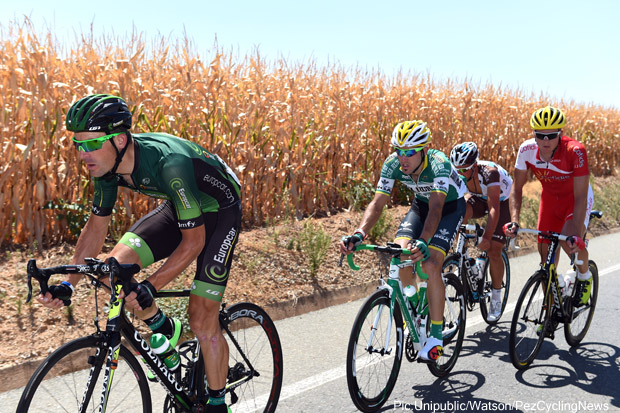 Downhill to the Hottest City in Spain
As Txurruka sped off the climb the peloton behind split into several groups. Txurruka was joined by Engoulvent but with the arrow-straight road on the outskirts of Córdoba the groups behind began to reform. Bouhanni and Sagan had been in the second group on the road and were keen to work their teams to bring everything together.

As the race headed into town on the wide roads of the autovia the bunch, altogether again, eased up and the two leaders continued to build their lead. Into the old town and down past the Roman Mausoleum on the Paseo de la Victoria the race headed across the finish line for the first time with the two leaders ahead by 36 seconds.

The GC teams had taken up position at the front of the peloton as the race headed out towards the Alto del Catorce por Ciento. The two leaders had now been brought back into the main bunch but the other news was that Peter Sagan (Cannondale) was down at the back and not looking too happy in the heat.

Uphill Again
Team Sky had now come to the front and the riders were tapping out a hot pace. Some of the team sprinters were dropping off so it was looking like a hardman’s finish. Cancellara (Trek Factory Racing) was not looking comfortable and he reportedly lost almost 5 kilos in weight yesterday despite taking on 9 liters of water. 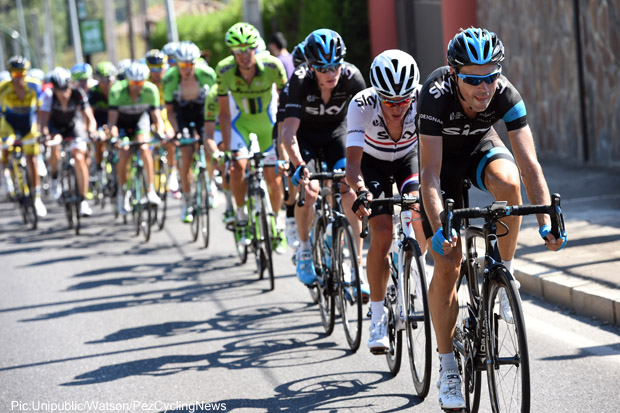 It was the two stalwarts of Team Sky who were setting the pace; Christian Knees and Vasil Kiryienka have really shown their strength for Sky in this type of role. Movistar had come to the front now as well but possibly to keep an eye on Sky as Valverde often takes a little while to ‘lay-in’ to a climb and they didn’t want any surprises…especially from Chris Froome (Sky) who was looking good and maybe hoping to take a page out of Nibali’s book: take time wherever you can! Bouhanni and Tom Boonen (OPQS) were losing contact with the race as the pace took its toll.

The main men were gathered at the front: Valverde, Quintana (Movistar), Froome, the bouncing style of Contador (Tinkoff-Saxo) but most impressive was that John Degenkolb (Giant-Shimano) and Dan Martin (Garmin-Sharp) were still looking good and hanging with the climbers.

Adam Yates Plays His Card; So Does Valverde!
Over the top of the climb and onto the rolling roads before the fall-off back into the city it was Adam Yates (Orica-GreenEDGE) and Winner Ancona (Lampre-Merida) who made a bid for freedom. Romain Sicard (Europcar) attempted to chase them down but it was Valverde himself who made the big attack and dropped the rest of the bunch. 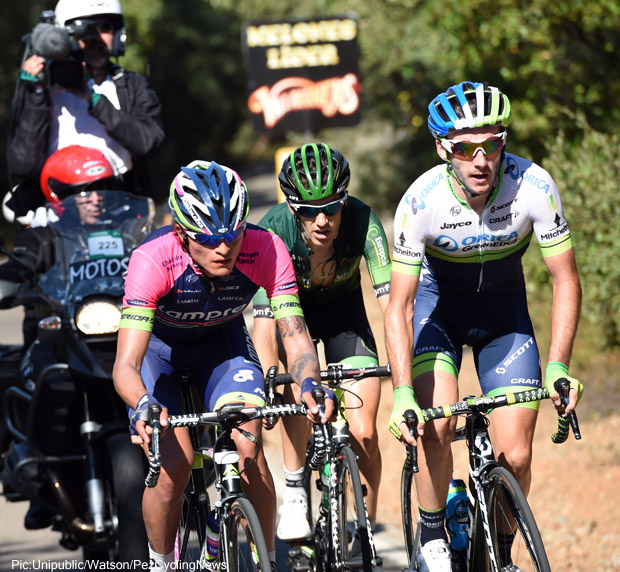 The four leaders came together and Valverde was looking good as behind a smaller group containing Contador was chasing but was trailing by 26 seconds with 20km to go. Cadel Evans (BMC) suffered a puncture and had to chase to regain the main group.

The hunt-down was on with Caruso (Cannondale) attempting to chase across but as the riders were heading through the twisty section before the final descent he wasn’t making much headway. The leaders didn’t have a huge gap but they were about to hit the run back into town.

Flying down the descent the four leaders were holding a 15 second gap at 15km to go. They were losing a second per kilometer with Romain Sicard showing the others the way. Valverde was pushing though but with the long run-in it was touch and go whether they would be able to hang on. And then it was all over as they realized that the bunch was close behind. With Matthews in the group, Yates had decided to call it a day. Valverde didn’t want to try on his own and all the hard work of Sicard was for nothing as he punctured.

Altogether again and the group eased back as they readied themselves for the finish. It was about 50-strong and if it came to the sprint it would be between Degenkolb and Matthews. Orica was leading the group as they kept the pace high to keep it together for the finale.

Adam Hansen Tries to Spoil the Party.
At 1.5km to go Adam Hansen (Lotto Belisol) gambled on a late attack and quickly got a gap but now the Giant-Shimano train took control. Hansen couldn’t hold on as Giant-Shimano powered towards the finish with Matthews holding Degenkolb’s wheel. They didn’t have it all their own way as Dan Martin and Caruso switched across the road and took up the running but as they came to the last 100meters it was the big German who hit the front with his typical galloping style. 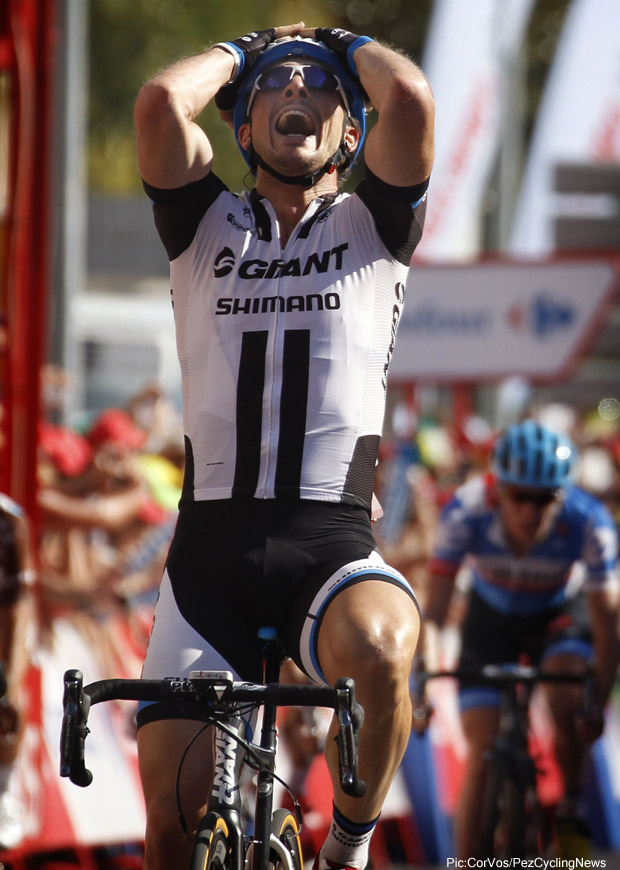 Head down he was powering all the way to the line and in the end took the win by three bike lengths from Vicente Reynes (IAM Cycling) with Matthews getting third spot from Caruso and Martin.

The Giant-Shimano rider appears to be able to handle the heat of a Spanish summer better than most and was jubilant at taking the win. At the finish he said, “I love the Vuelta a España and also the country. I love being in Spain. Yesterday was quite disappointing not holding on, it was too hard and too explosive. Today was better. I am very happy to have a stage of the Vuelta.” Degenkolb Loves Spain, and Spain loves Degenkolb! 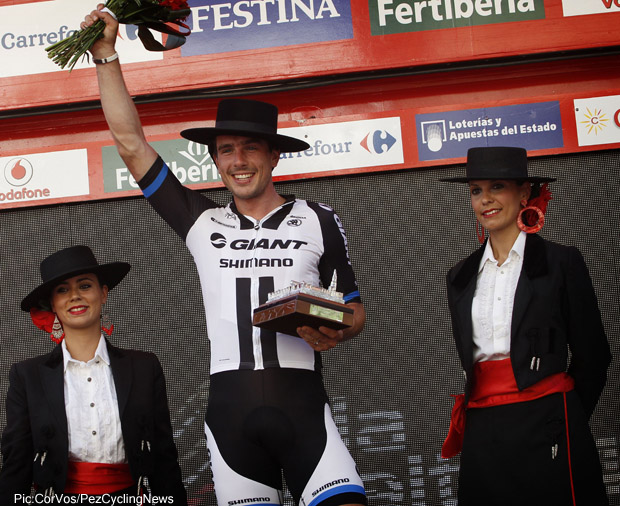 John Degenkolb in his sombrero Cordobés

With another Category 3 climb before tomorrow’s finish at Ronda who would bet against him doing it again?

Belkin with strong riders in Druivenkoers