Rider Interview: US Cycling turned its back on Marion Clignet, but the French Federation saw her talent and snapped her up in a flash. After a clutch of National, World and Olympic medals riding for ‘Le Bleus’ she settled in the land of her family origins. 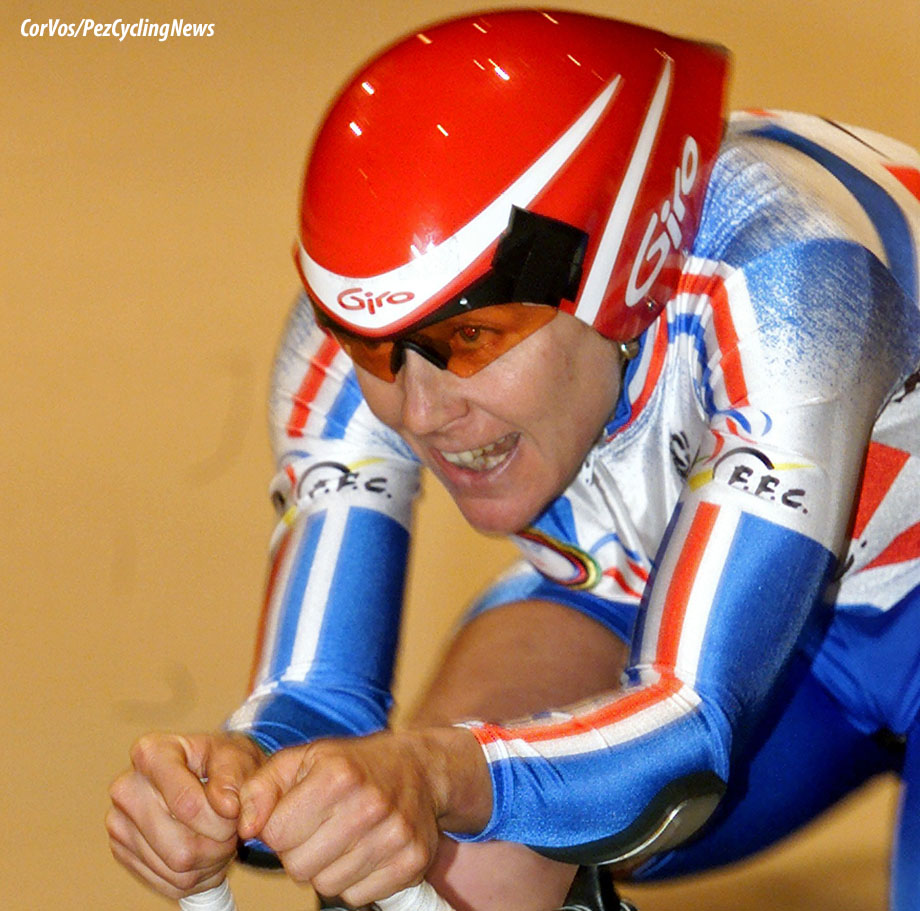 Rejected by the US system, Marion Clignet said ‘ciao’ to Chicago Illinois and ‘bon jour’ to Brittany. The US Federation’s loss was the French Federation’s gain with the girl who the USCF thought was, ‘too much of a risk to have on the team, as an epileptic,’ bringing home six world titles and two Olympic silver medals to the land of her parents’ birth – she still enjoys dual US/French citizenship – but is now firmly rooted in La Republique. We caught up with Marion at her home near Toulouse, recently.

PEZ: The year 1990 and you were silver medallist in the US Ladies Road Race Championship – but the Federation spurned you for the Worlds?
Marion Clignet: There were three championships which were Worlds selection races; I was second to Ruthie Matthes in the road race, was in the team which won the team time trial and was third in the time trial but they told me, ‘there’s too much risk involved in having you on the national team,’ because of my condition. I was a huge disappointment because I’d worked so hard to gain selection. I spoke to some French girls at a race and they said that I should come to France and race; I packed my bags and finished the season in Brittany. 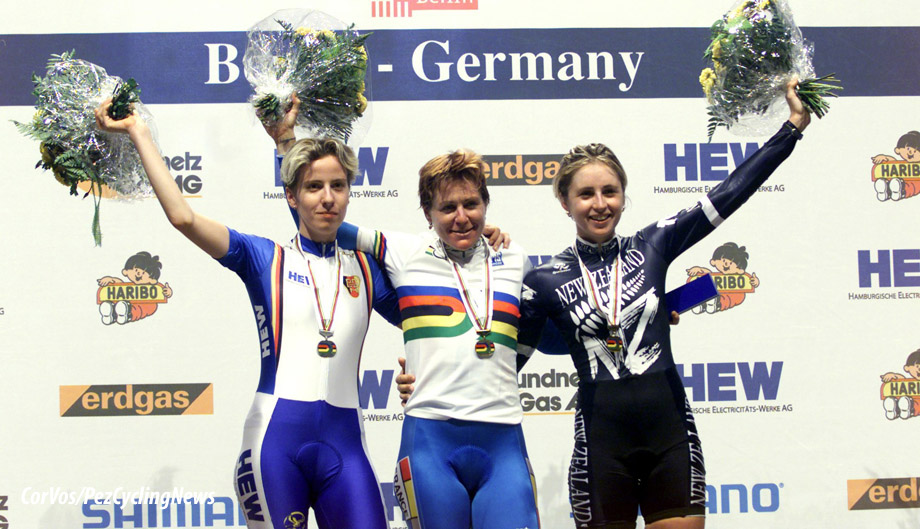 PEZ: You burst onto the French scene in 1991 winning the national road race and pursuit titles; beating Jeannie Longo to win the latter.
I had dual citizenship as my parents are French so I spoke to the French team director and they were happy to have me. It was the first time I’d been a full time athlete, I raced with the men as well as the girls and that brought me on.

PEZ: You became a World Champion in your first season riding for France.
Yes, we won the team time trial at the Worlds in Stuttgart after putting in tons of hours of preparation; that was the defining moment of my acceptance on the French squad. I think that the US rejection fuelled my desire to go further than I had before in training and step out of my comfort zone. 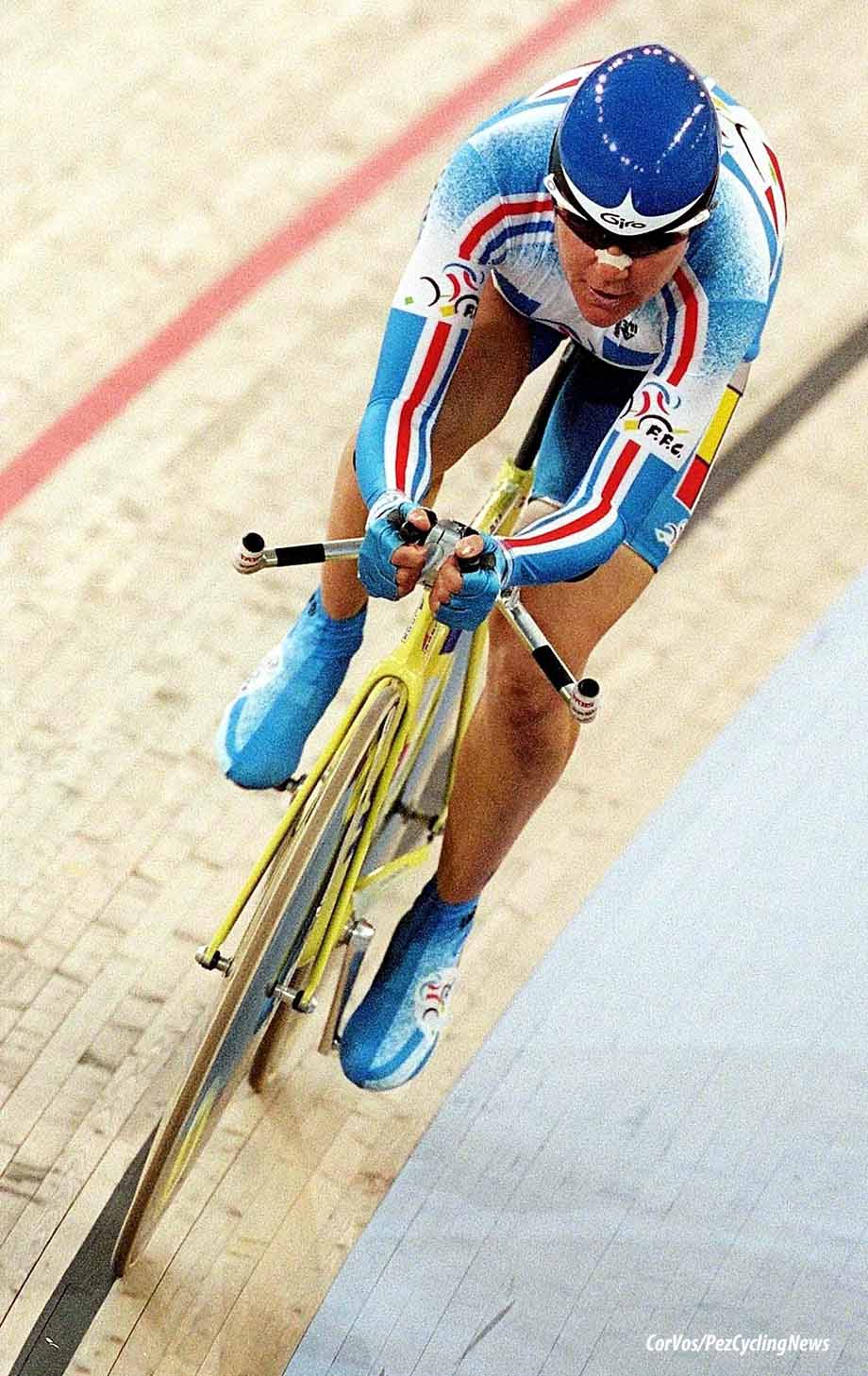 PEZ: What about the seizures you suffer as an epileptic?
I know when one is coming on, my body gives me little signs, which I’ve come to know and have to listen to – it wasn’t easy if you were in the middle of a training session.

PEZ: You won three World Pursuit titles, 1994, ’96 and ’99, which one gave you most satisfaction?
The 1996 one in Manchester, after the Atlanta Olympics; I used the ‘Superman’ position, which I had wanted to do at Atlanta where I took silver behind the Italian girl Antonella Bellutti who did use ‘Superman.’ The team manager wouldn’t let me use the position in Atlanta but when I adopted it for Manchester I won the title from the Australian girl Lucy Tyler-Sharman with Bellutti third and I set a world record for 3,000 metres which stood for four years. It enabled you to gear two, maybe three teeth higher on the chainring, you could put so much more power down and it was so aero. 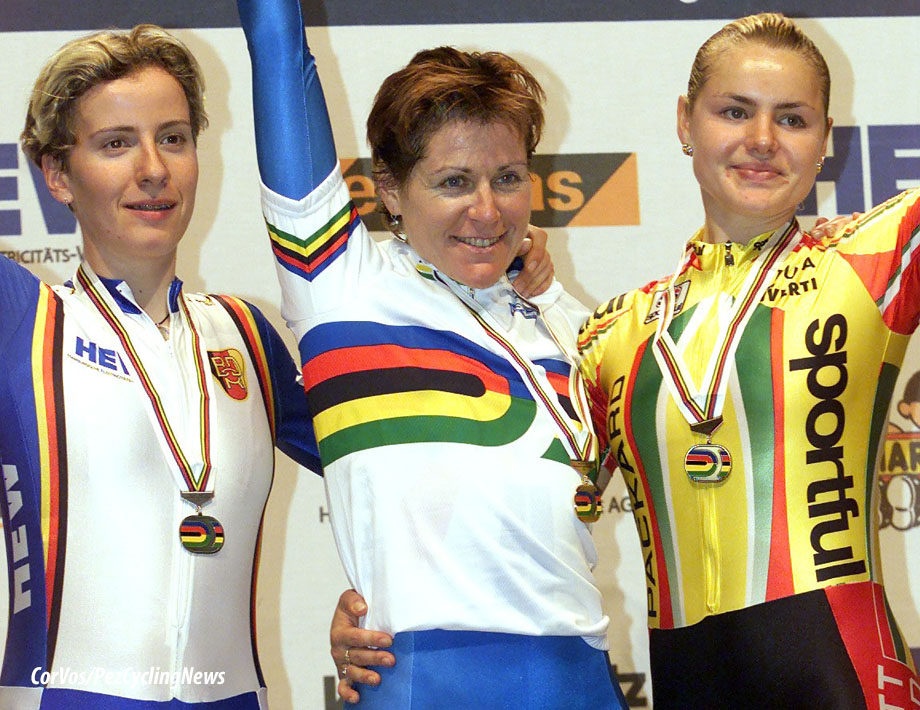 PEZ: You were up against some quality ladies in that era; Rebecca Twigg and Leontien Van Moorsel to name but two.
Yes, it was a period when there were was a high standard in ladies’ racing. In 1991 at the Stuttgart Worlds in the pursuit, I took bronze behind the German girl Petra Rossner, Leontien failed to qualify – but at that time she’d lost a lot of weight and was trying to get herself sorted out. But of course, she won the pursuit – where she beat me in the final – the time trial and road race in the 2000 Olympics and then the Olympic time trial again in 2004. Rebecca beat me in the final of the Worlds pursuit in Norway in 1993, she won it again in ’95 but I remember that in Atlanta for the ’96 Olympics, where I got silver in the pursuit, she didn’t go well in the pursuit then had a dispute with team management about bikes and her coach then didn’t ride the time trial.

PEZ: And, of course, there was your team mate Jeanie Longo?
Jeannie was never really a team mate, she was never a team player, she wouldn’t stay in the same hotel as the team and everything was about Jeannie. Catherine Marsal and Cecile Odin were real team mates but not Jeannie. 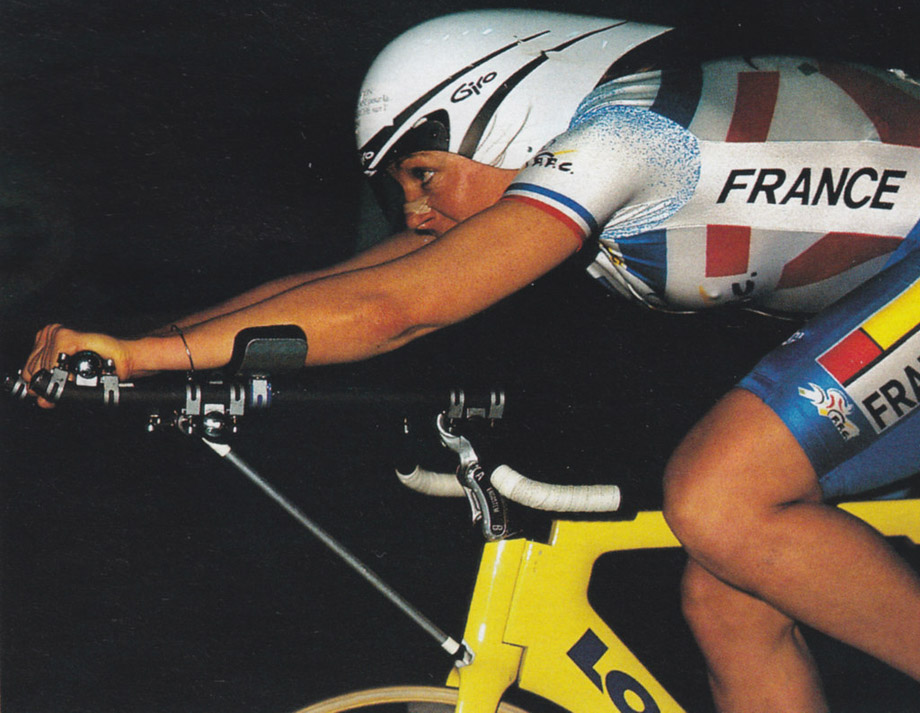 PEZ: Two Olympic pursuit silvers, in hindsight?
As I explained, I regret not being allowed to ride the ‘superman’ position in Atlanta ’96 but no complaints about 2000 in Sydney, Leontien was just faster.

PEZ: You lost seasons ’97 and ’98 to illness.
Yes, ‘inflammatory arthritis,’ it comes from a gene – HLA B27 – which runs in our family, my sister and father had problems with it too. I first started to suffer from it in the winter after the Atlanta Olympics but it took a long time for me to pin down what was wrong, I saw a slew of doctors before I got a proper diagnosis. There was a guy in the UK, Brian Welsby who manufactured foods and drinks for expeditions which were all plant based containing B vitamins and anti-inflammatory agents; I started to use them and over a couple of months it cleared up. It was a worrying time, not just with the illness but because the Federation was threatening to cut my funding because I wasn’t racing. 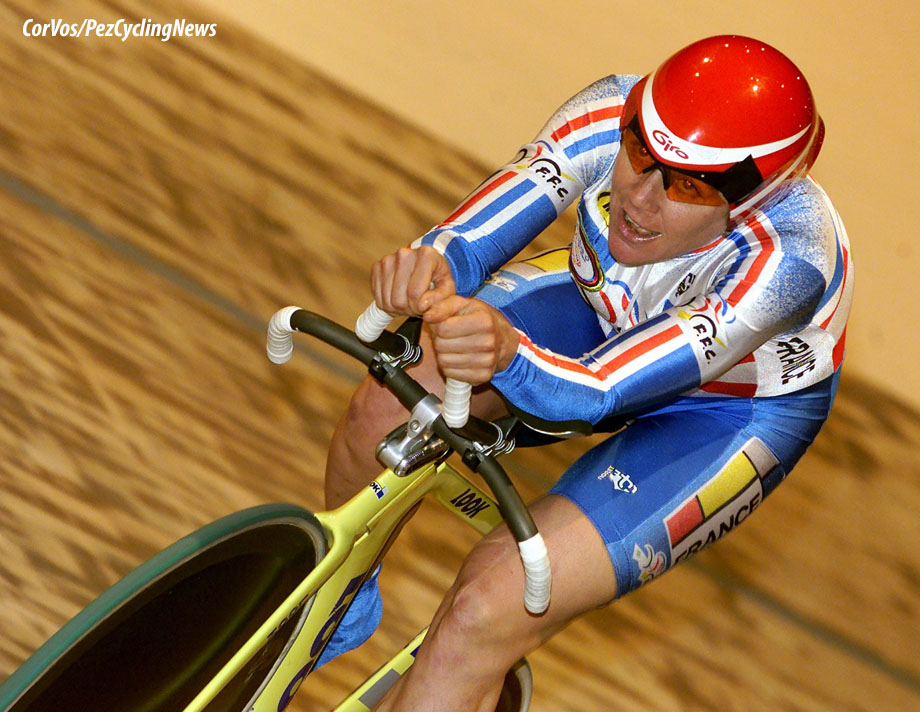 PEZ: I’ve read that perhaps you exacerbated things by trying to train too hard before you were completely recovered?
That’s possible, I think there may have been an element of chronic fatigue in there, yes.

PEZ: You took to the points race late in your career but went on to win two Worlds points race titles.
I first rode it at a Mexico World Cup; initially I was really scared on the track among other riders. I was kicking back so hard to keep away from the wheel in front that I was running the fixed sprocket off the hub. The French team guys up in the stands found this hilarious and their laughter pushed me on to improve. One of the guys said to me that what I should do is not get involved in the points sprints but wait until the rest were tired then use my pursuiting ability to lap the field. And that’s what I did – but of course subsequently they changed the rules so that a lap gain means you are awarded points rather than putting you a lap up on the field. 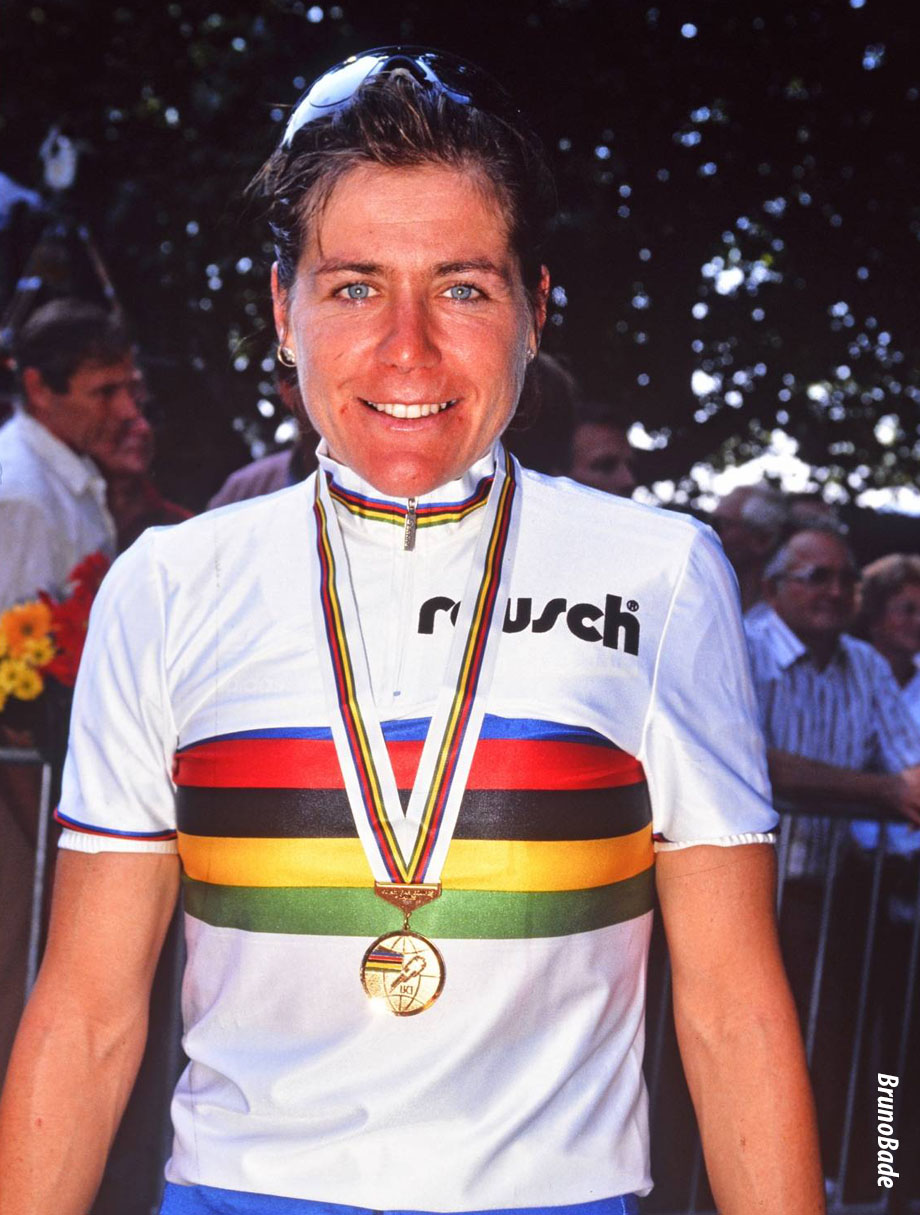 PEZ: Worlds points and pursuit gold in 1999.
Yes, when I came out of the illness I worked really hard and took two rainbow jerseys within days of each other.

PEZ: You had some nice road results too, including the French national title.
I did OK on the road, it was much more possible to mix disciplines in that era; it’s all so specific now. I’d ride the road then switch to the track to prepare before a big event. I was a better team player than team leader; I remember leading out my Acca Due team mate Diana Ziliute [Lithuania] to win the 2000 Primavera Rosa in Sanremo and still finishing 10th myself – I got a lot of satisfaction from results like that. 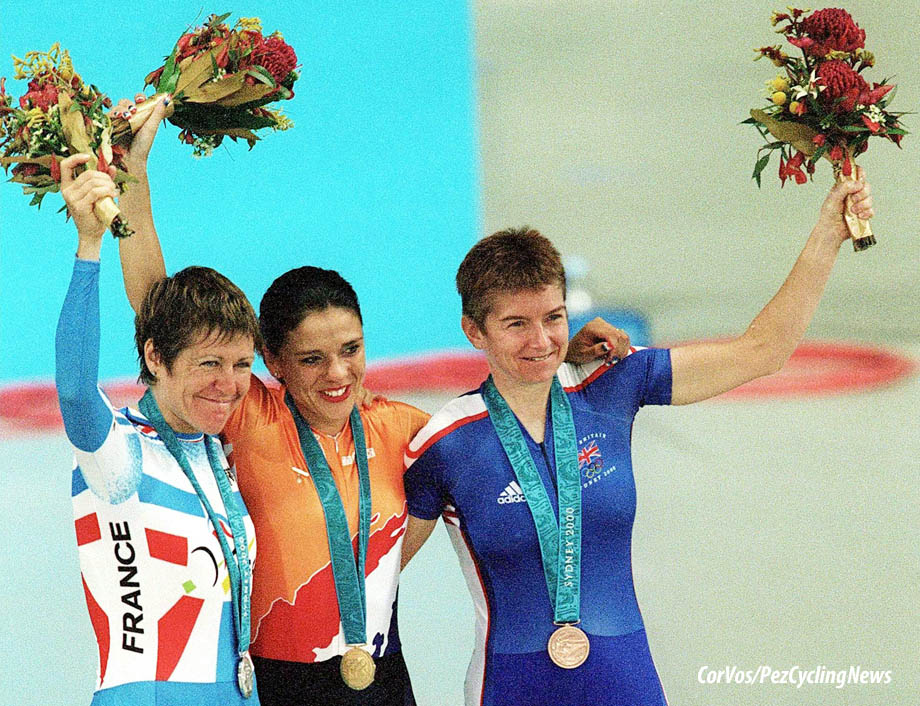 PEZ: You wanted to come back for the 2000 Olympics.
That was at the end of my career but I didn’t strategize it properly. I think I should have made it three Olympic pursuit appearances by riding in Barcelona in 1992 but Jeannie Longo had that place, going out in the quarter finals to Rebecca Twigg. I rode the road race in Barcelona. 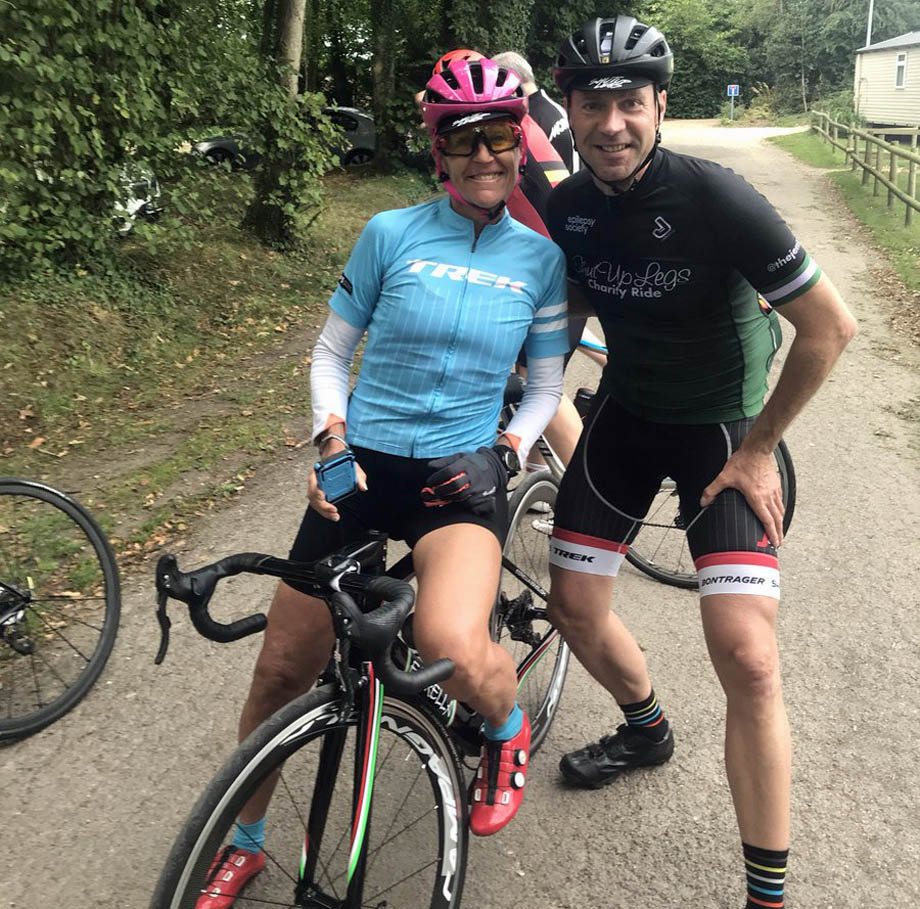 PEZ: Anything you would do differently?
Probably a bunch of things like not training with the guys in the beginning, it was like riding the Worlds every day – I should have rested more. I worked with a good Dutch coach in ’91, I should have stuck with him. But the thing is that there wasn’t the knowledge available back then that there is now; the fact that women react differently to training load for one thing – the research hadn’t been done. . . 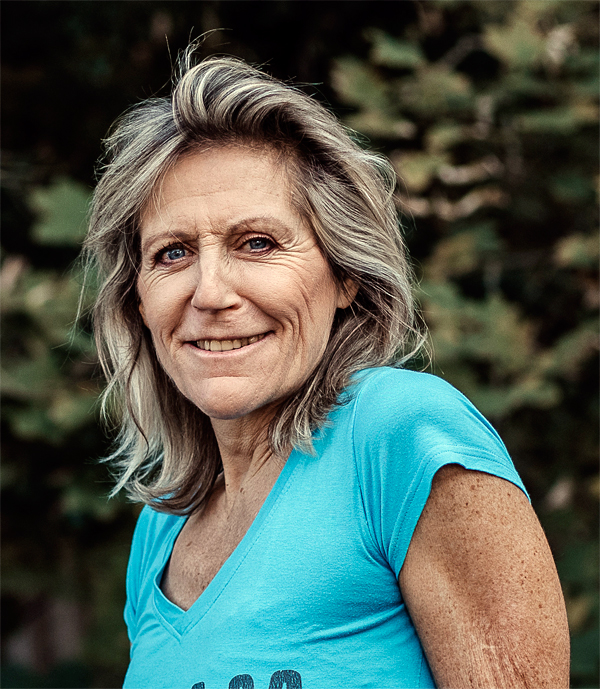 # Thanks to Marion for her time. #