Selle Italia … the marque evokes memories of riding and racing on the original Flite Titanium saddle in the 90s (I’m sure many PEZ readers have similar memories). Selle Italia still makes what amounts to the original Flite, but it’s considered an “urban” saddle (go figure). The racing Flite model is a very different saddle than the original. In terms of shape/curvature, the Novus lineup is closer to how I remember the original. But the Novus saddles incorporate a center cutout for “down under” relief that is pretty much common to most modern saddles. And the Boost versions are short-nose saddles that have gained popularity amongst many roadies (including myself). 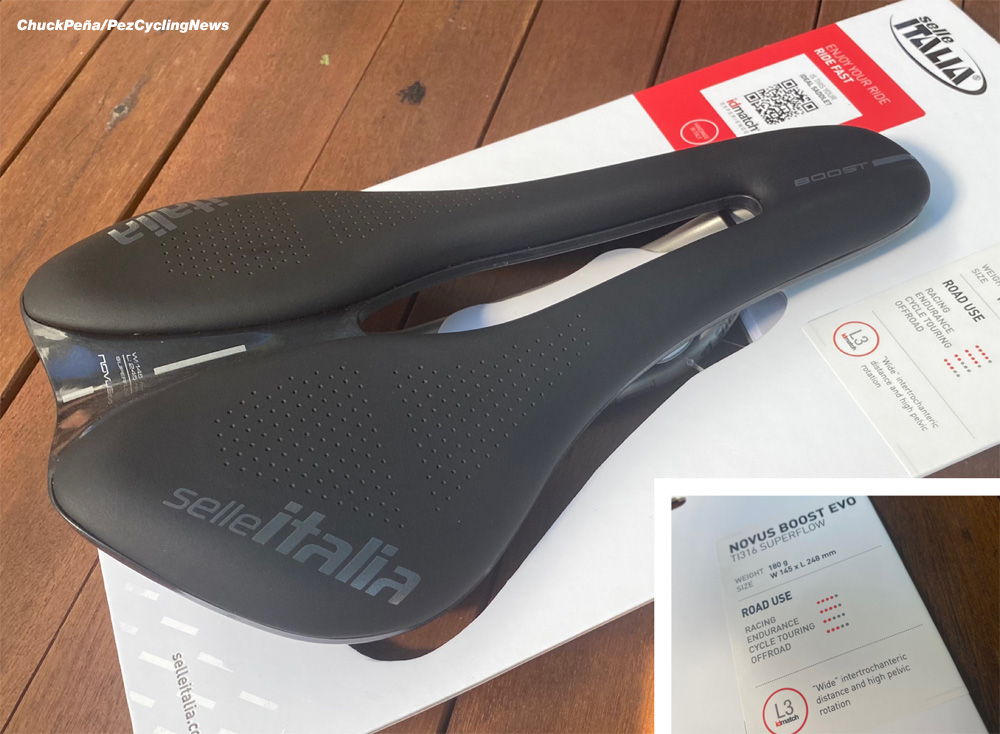 While carbon fiber is currently the holy grail for all manner of bike parts (and my other saddles have carbon rails), the titanium rail version of the Novus Boost saddle is an appropriate throwback to the 90s when titanium was THE wonder material. As such, the Novus Boost Evo Ti315 Superflow is more in keeping with the vintage of the Flite Titanium saddle I rode and my #steelisreal Hollands that was my race bike in the 90s. 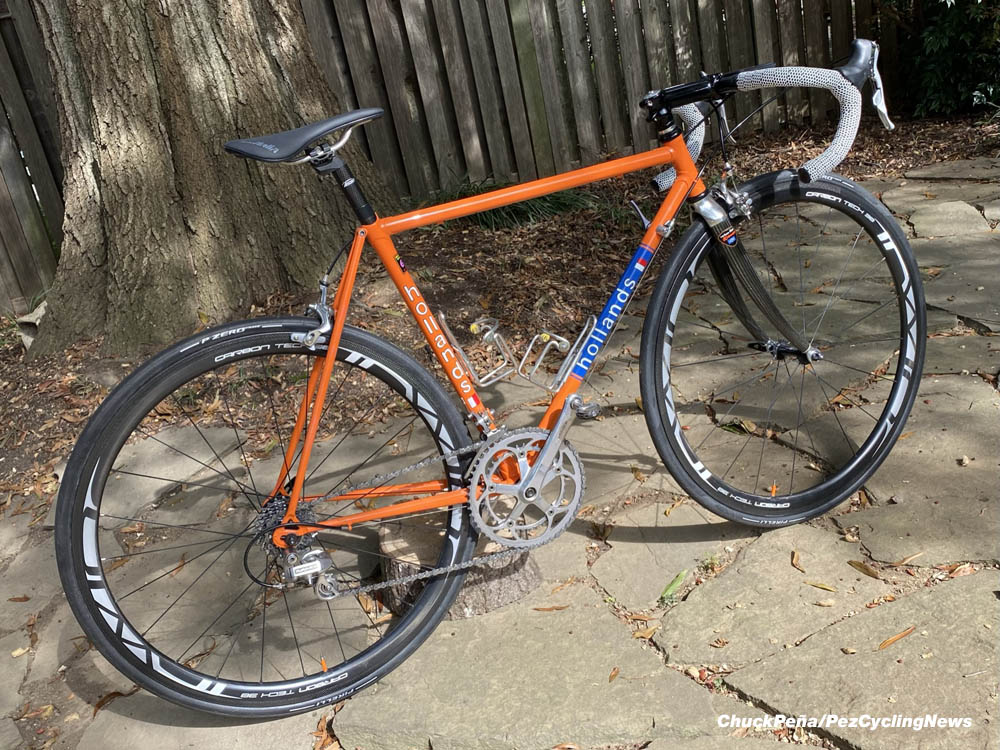 Here’s the down low on the saddle according to Selle Italia: 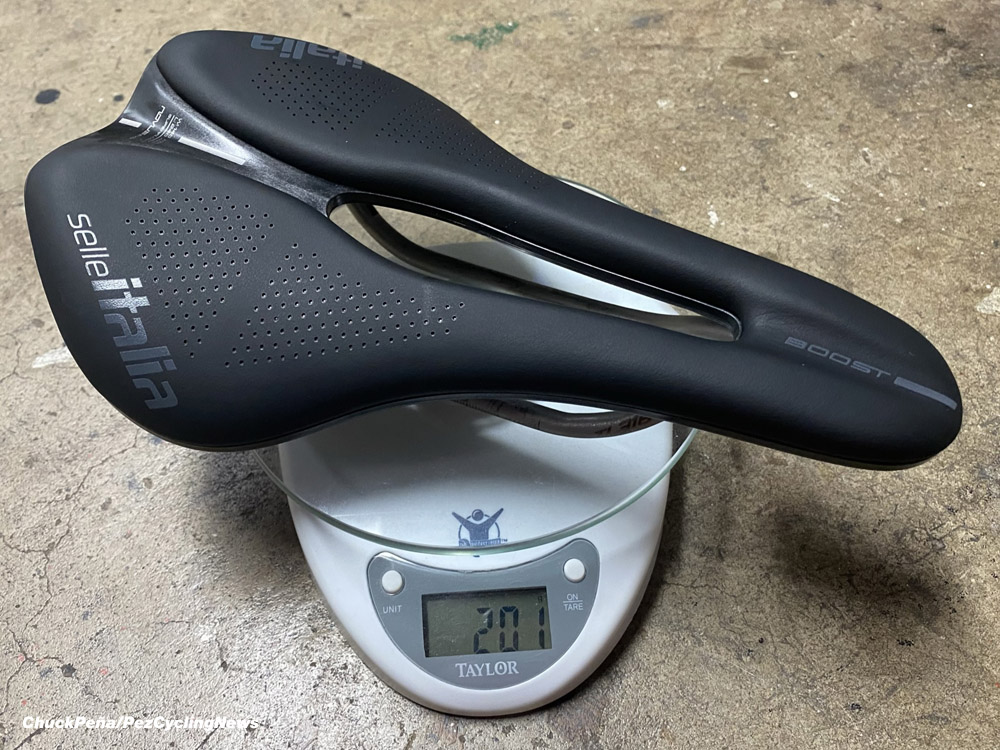 My saddle tipped the scales 12 grams heavier than spec

The saddle shape is what Selle Italia calls “waved” (or what I would call curved). According to Selle Italia: “Waved shape to help give greater stability in the saddle and better support to the ischial bones, even for long periods of time.”

It’s a “superflow” saddle so has a center cutout (Selle Italia has other saddles that don’t have cutouts): “Superflow central cutout to better release pressure from the perineal area and increase the feeling of comfort.” 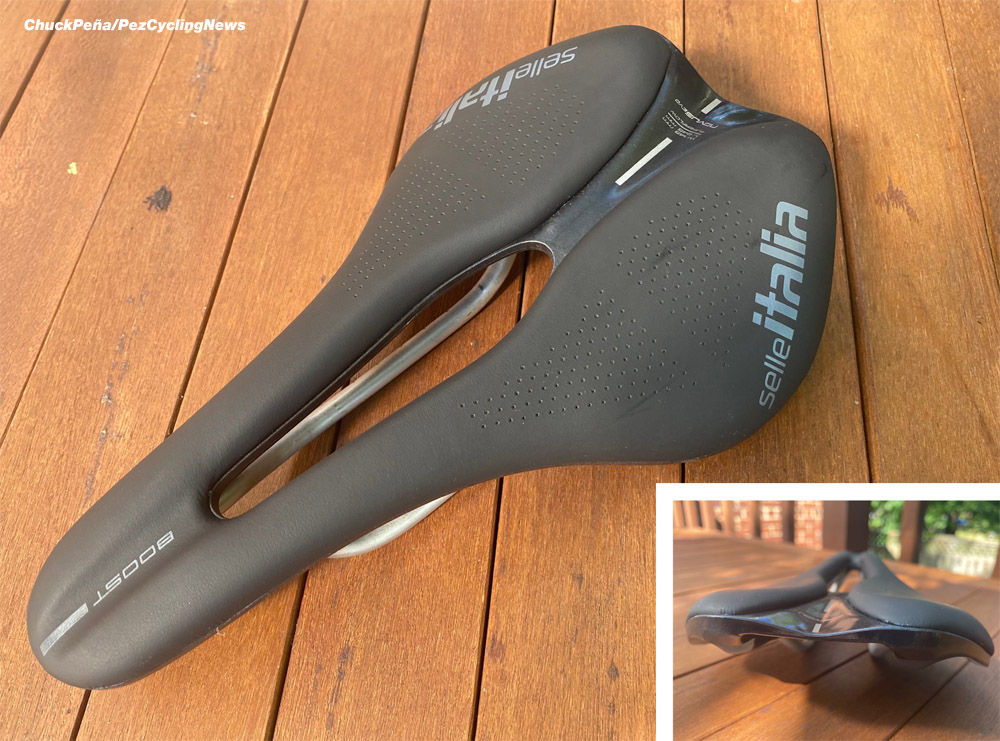 In addition to a generous center cutout, the Novus Boost Evo has what amounts to a channel that runs the length of the saddle from front to back

The saddle is what Selle Italia calls an L3 size (“wide intertrochanteric distance [essentially the distance between the outside of the ball end of the femurs] and high pelvic rotation”) based on their idmatch system to determine appropriate saddle size.

I’ll be honest … I didn’t use Selle Italia’s idmatch. My choice of the Novus Boost Evo was based on the fact that its overall shape is what I prefer, i.e., a saddle that has curve both front-to-back and side-to-side, the width (within a millimeter or two) is the same as my other saddles, and I’m now a short-nose saddle convert. 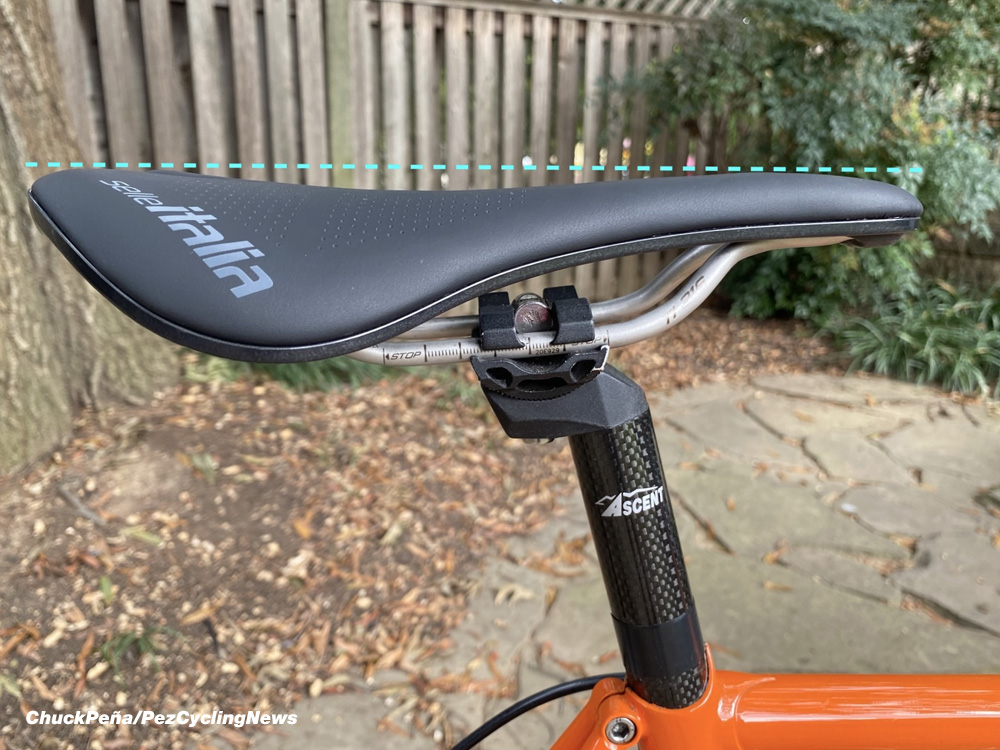 If your butt and other undercarriage parts prefer a board flat saddle, these are not the droids you’re looking for

If you’re a total weight weenie and chasing weight (lack thereof) at all costs, you would opt for the Novus Boost Evo Kit Carbonio Superflow with carbon/ceramic rails. Per spec, that saddle weighs in at 165 grams (24 grams lighter). But it also costs $329.99 ($80 more). That translates to costing $3.33 per gram saved. Whether the weight savings is worth the extra $$$ is up to you and your wallet. 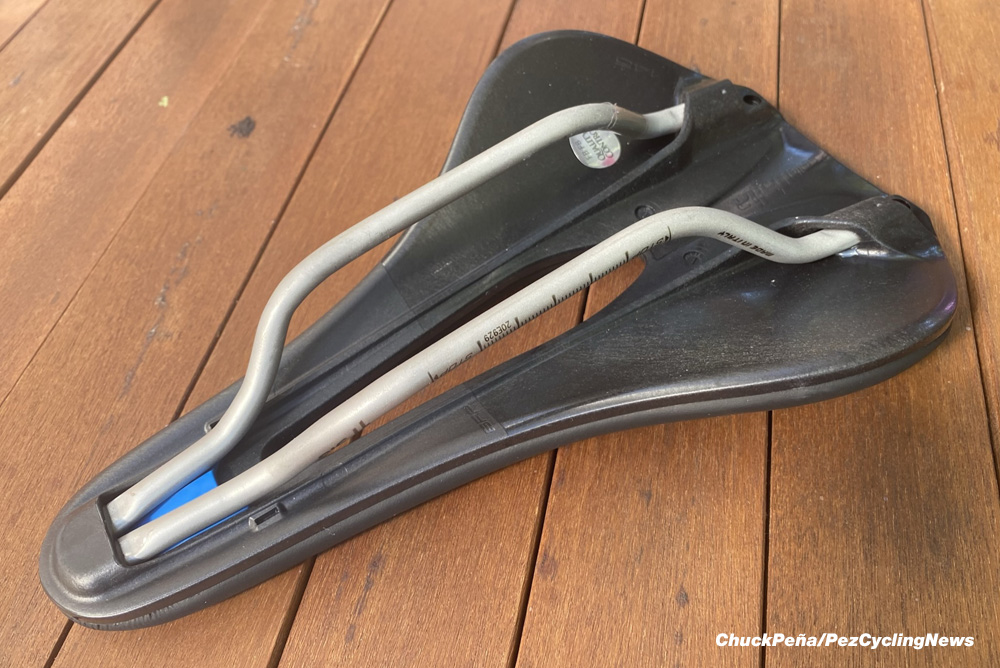 Brushed titanium rails instead of the black goodness of carbon fiber

Besides weight, another thing to keep in mind with carbon fiber rails is that they’re oval not round (the industry standard is 7x9mm). If you have a seat post that clamps from the top and bottom, oval rails aren’t a problem. But if your seat post clamps from the side, you’ll need some sort of adapters (if the manufacturer makes them) for oval rails — otherwise, you’ll need to buy a new seat post.

But if weight isn’t the be-all/end-all, the reason titanium is a good alternative has to do with the property of the material: Titanium has a low modulus of elasticity, which means it is very flexible and can return to its original shape after bending. In other words, it’s spring-like (but not “springy”). So titanium rails can provide a certain degree of shock absorption/comfort (but not being “bouncy”) by not being overly stiff.  #marginalgains  For long hours in the saddle, that might be preferable vs the all-out stiffness/lightness offered by carbon fiber. In the end, it will come down to each rider’s personal preference and what’s good is having choices. 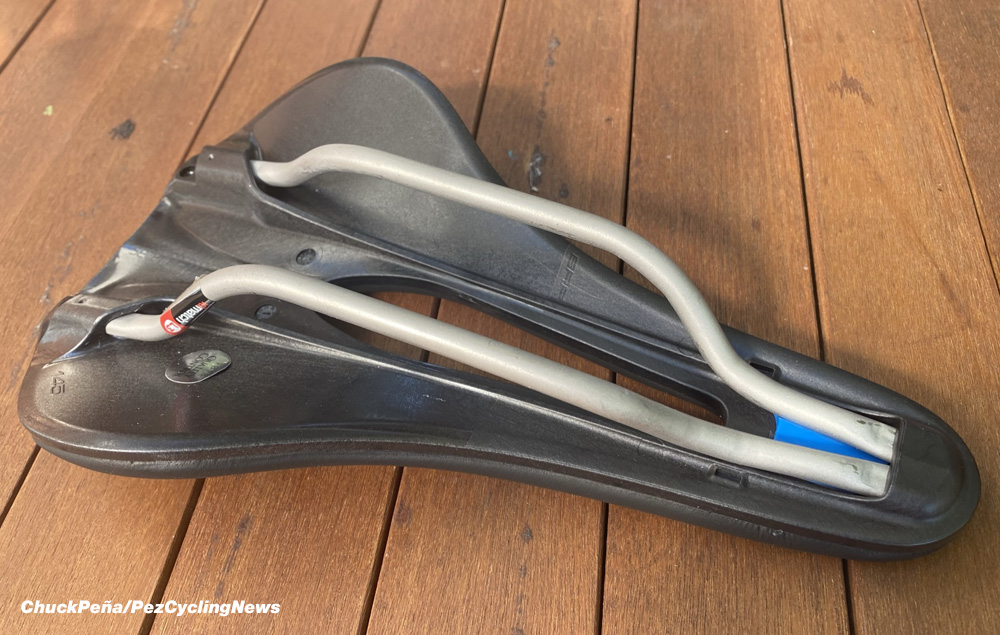 The rails aren’t carbon, but the shell is carbon/nylon composite

I don’t know whether they’re actually “in vogue,” but more manufacturers are offering short-nose saddles for roadies. And they’re relatively popular in the pro peloton. The idea behind a shorter nosed saddle is that it allows you to lean forward more and get lower into a aero position more comfortably by reducing pressure on soft tissue. In addition to being shorter, the nose of the saddle is usually wider than traditional saddles, providing more of a platform for riding “on the rivet.” 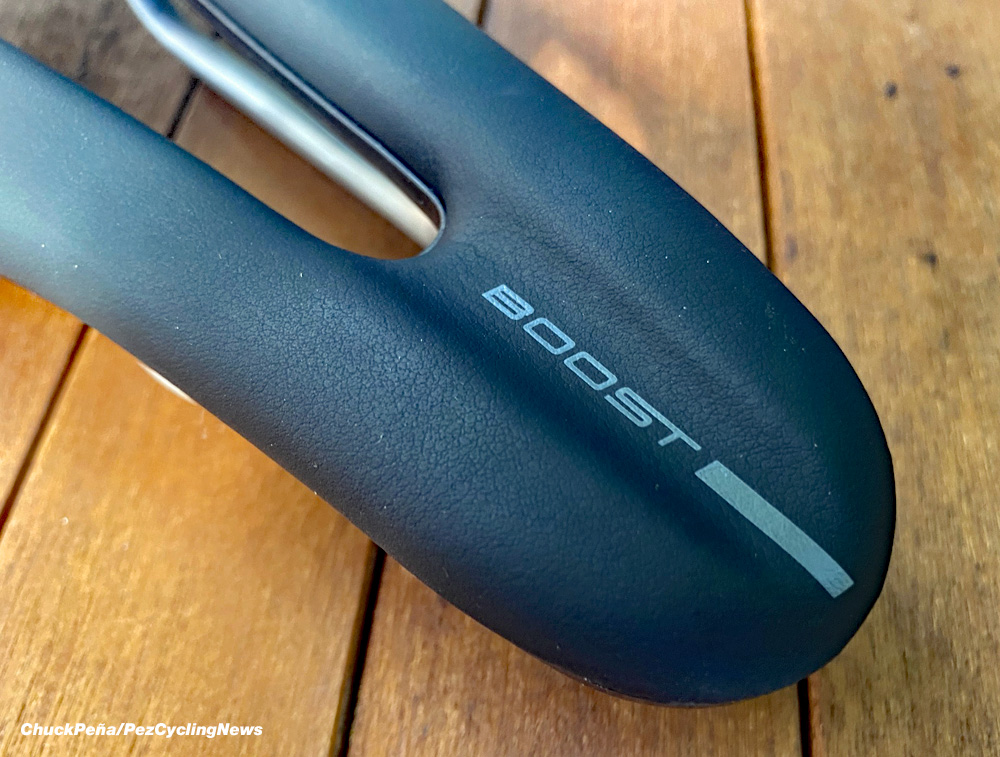 Also, “short” is a relative term. It’s not that the Novus Boost Evo Ti316 Superflow is a “stubby” saddle (like some triathlon saddles) — it’s just shorter than a traditional saddle. How much shorter? The Novus Superflow Endurance saddle is 282mm long (about the same as the original Flite saddle) vs 248mm for the Novus Boost Evo (BTW, the UCI lower limit for saddle length is 240mm) — so 34mm or about 1.3 inches difference. One question worth asking is: When you’re riding on the rivet on a traditional saddle, are you really using that extra length? 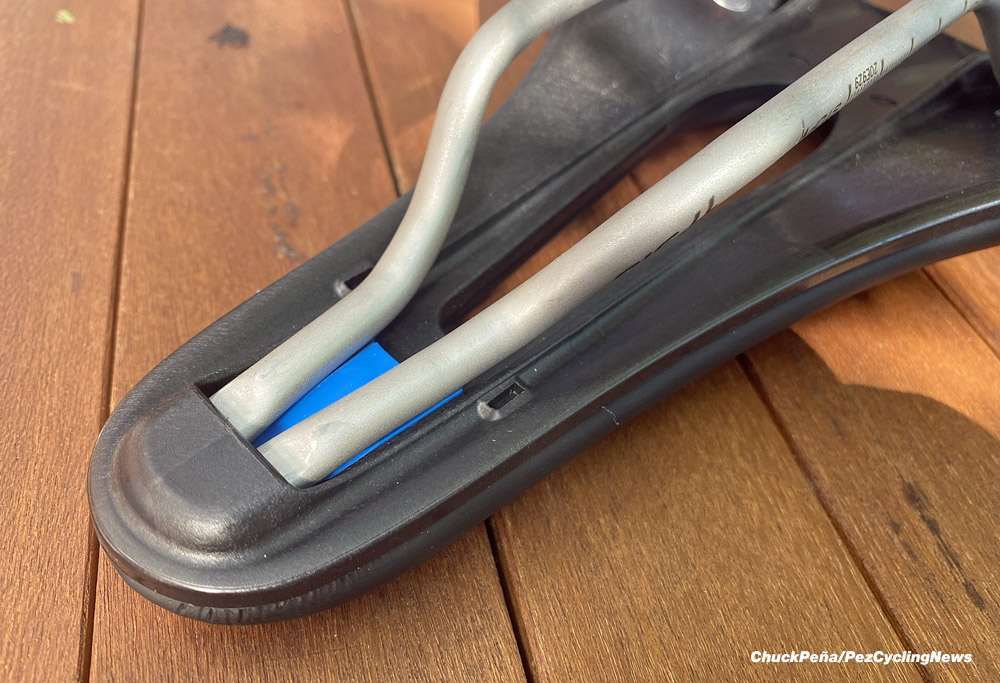 Should you be riding a short-nose saddle? That’s the proverbial $64,000 question and there isn’t a definitive answer. Every rider is different. What’s comfortable for one person is a pain in the a** (or some other part of the anatomy) to another. So try before you buy is always the best, which is a feature of Selle Italia’s idmatch system:

Mounting a short-nose saddle is a little different

Especially if you’re changing from a more traditional length saddle, mounting the Novus Boost Evo Ti316 Superflow won’t be a straightforward process. Although the  saddle has markings on the right rail to aid saddle fore/aft placement, they’re not useful the first time mounting the saddle (other than to know the limits of how far forward or back the rails can be clamped). 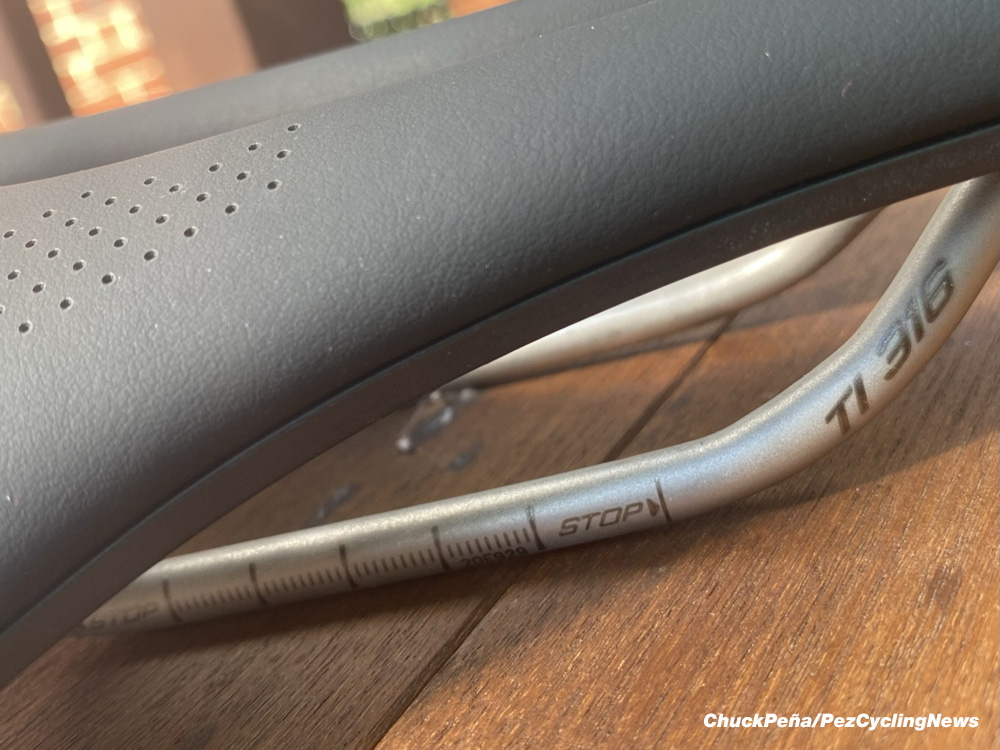 Here’s the method I use to replicate my old saddle position (even if it doesn’t exactly, it’s very close and I only have to make very minor adjustments):

In my case, the Selle Italia Novus Boost Evo Ti316 Superflow was 20mm shorter than the Fizik Aliante I previously had on my Hollands. So I mounted it with the nose-to-steerer tube distance 20mm longer. 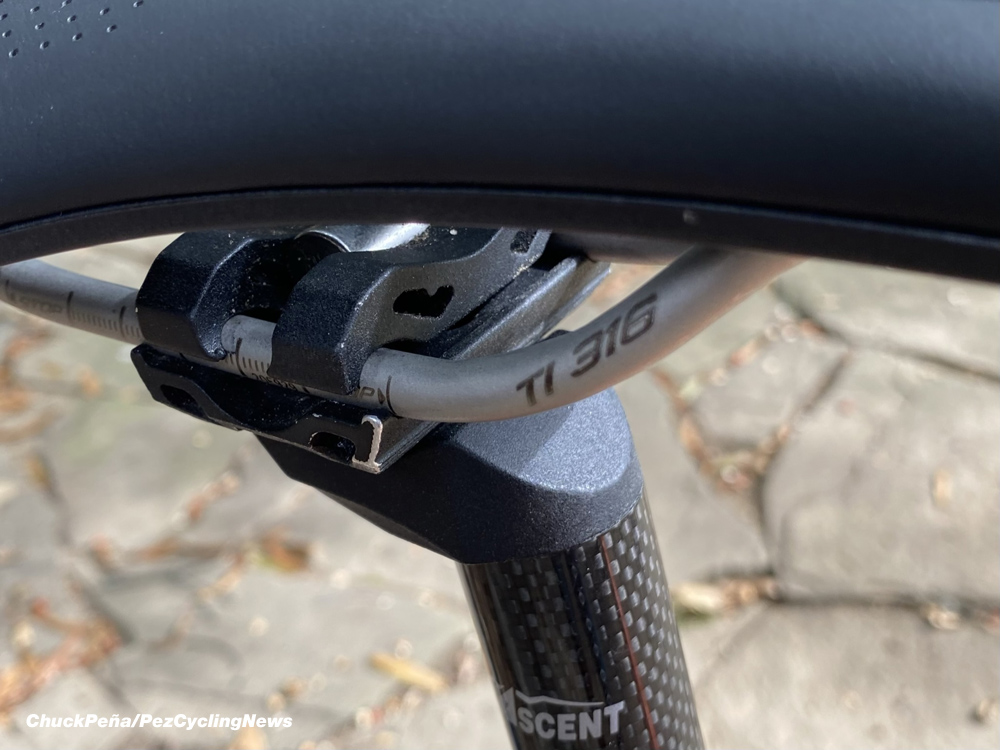 To get the Novus Boost Evo saddle in the right position, I’m at the limit for how far back I can clamp my saddle (it’s a good thing my seat post has set back!)

Also, don’t assume that the saddle height will be the same with a new (different) saddle. Check it because millimeters matter. In my case, I was good to go swapping the Fizik Aliante for the Selle Italia Novus Boost Evo Ti316 Superflow,  but I’ve had to make seat post height adjustments changing saddles on other bikes.

Saddles are a very personal (even intimate) choice. So my impressions of the Selle Italia Novus Boost Evo Ti316 Superflow saddle are based on my butt (and other anatomical parts). YMMV. So with that in mind… 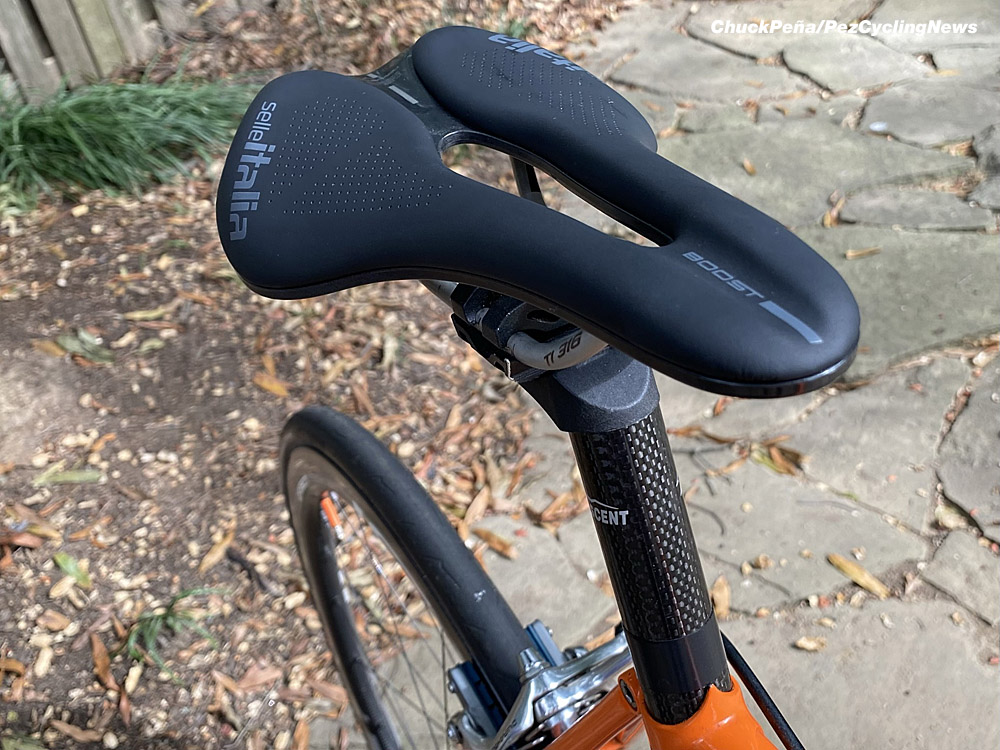 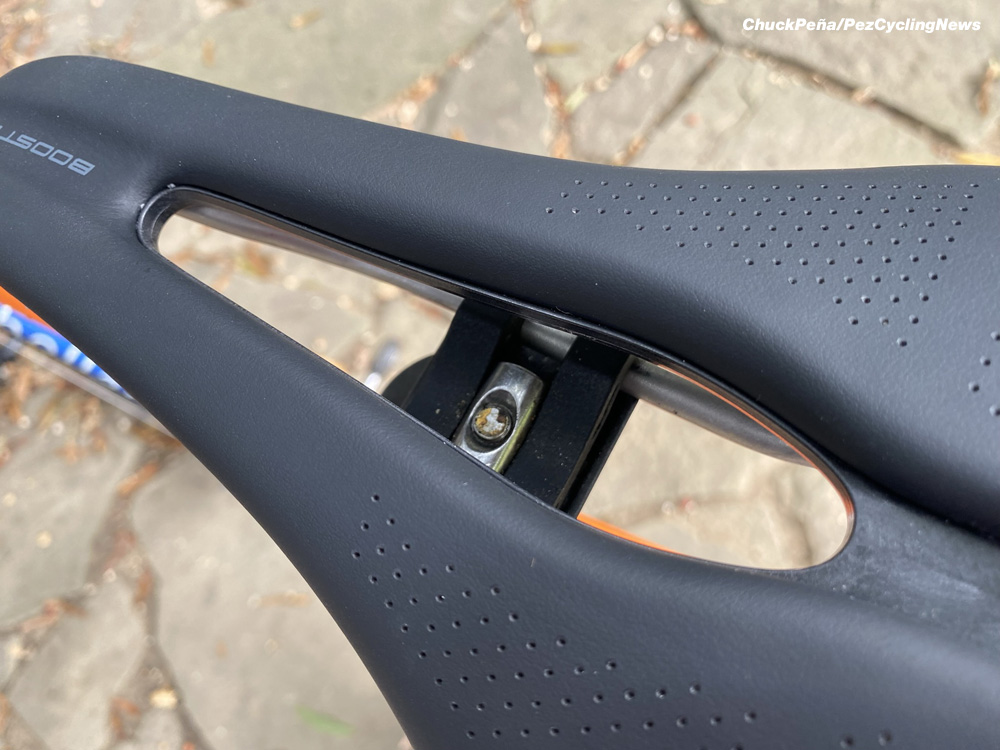 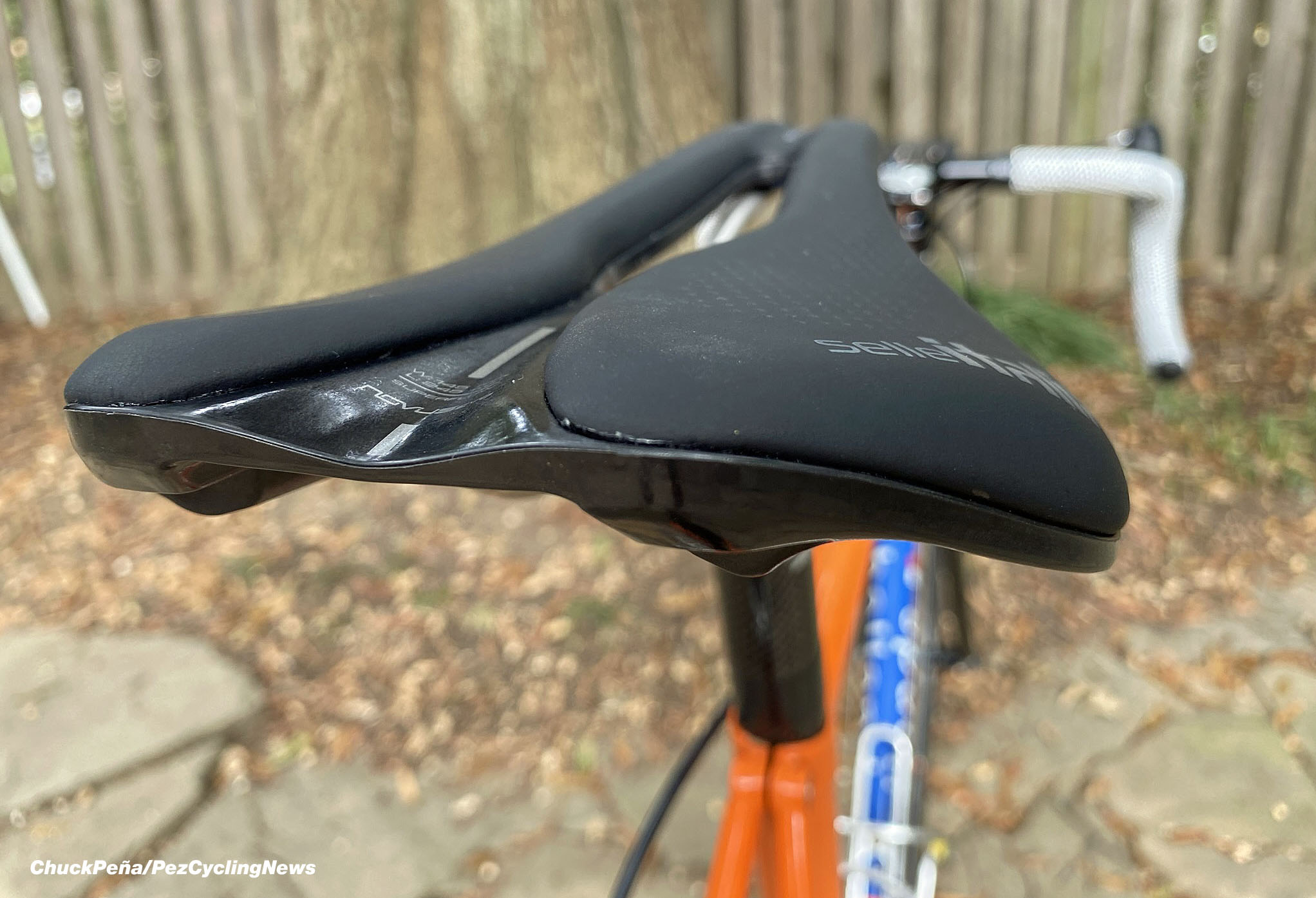 If a curved/waved saddle shape plus a short-nose is to your liking, the Selle Italia Novus Boost Evo Ti316 Superflow saddle is a worthy modern day successor to the original Selle Italia Flite saddle that graced my Hollands in my much younger days. In addition to other more modern bits that I’ve added over the years, it’s now on my Hollands as part of the “mod” in retro-mod. But I don’t doubt that my butt would be happy with it on either my Colnago V3 or Felt FC. 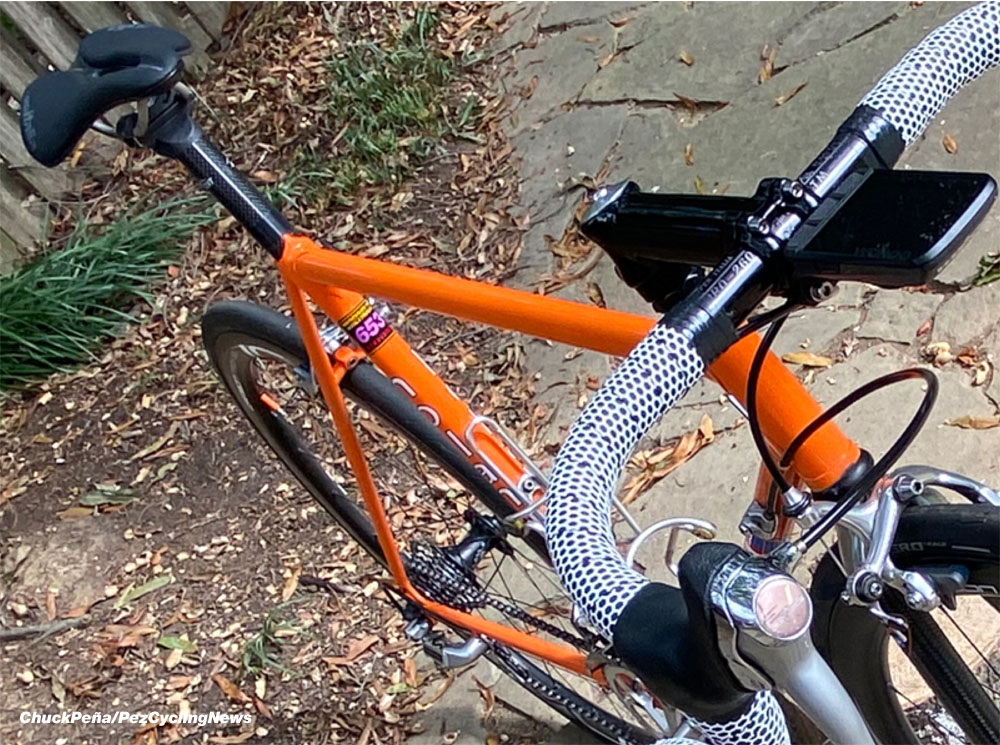 Note: If you have other experiences with gear or something to add, drop us a line. We don’t claim to know everything (we just imply it at times). Give us a pat on the back if you like the reviews or a slap in the head if you feel the need!

PezCycling News and the author ask that you contact the manufacturers before using any products you see here. Only the manufacturer can provide accurate and complete information on proper/safe use, handling, maintenance, and or installation of products as well as any conditional information or product limitations.

Is Mountain Biking Considered As An Extreme Sport