US Hero Eric Heiden Gets PEZ’d!

Interview: Olympic medalist and record setting ice-skater turned professional cyclist – Eric Heiden was a US hero that burst on the cycling scene with the iconic 7-Eleven team. Ed Hood caught-up with Eric at his home in Utah to hear all about his move from ice to tarmac and all his successes. 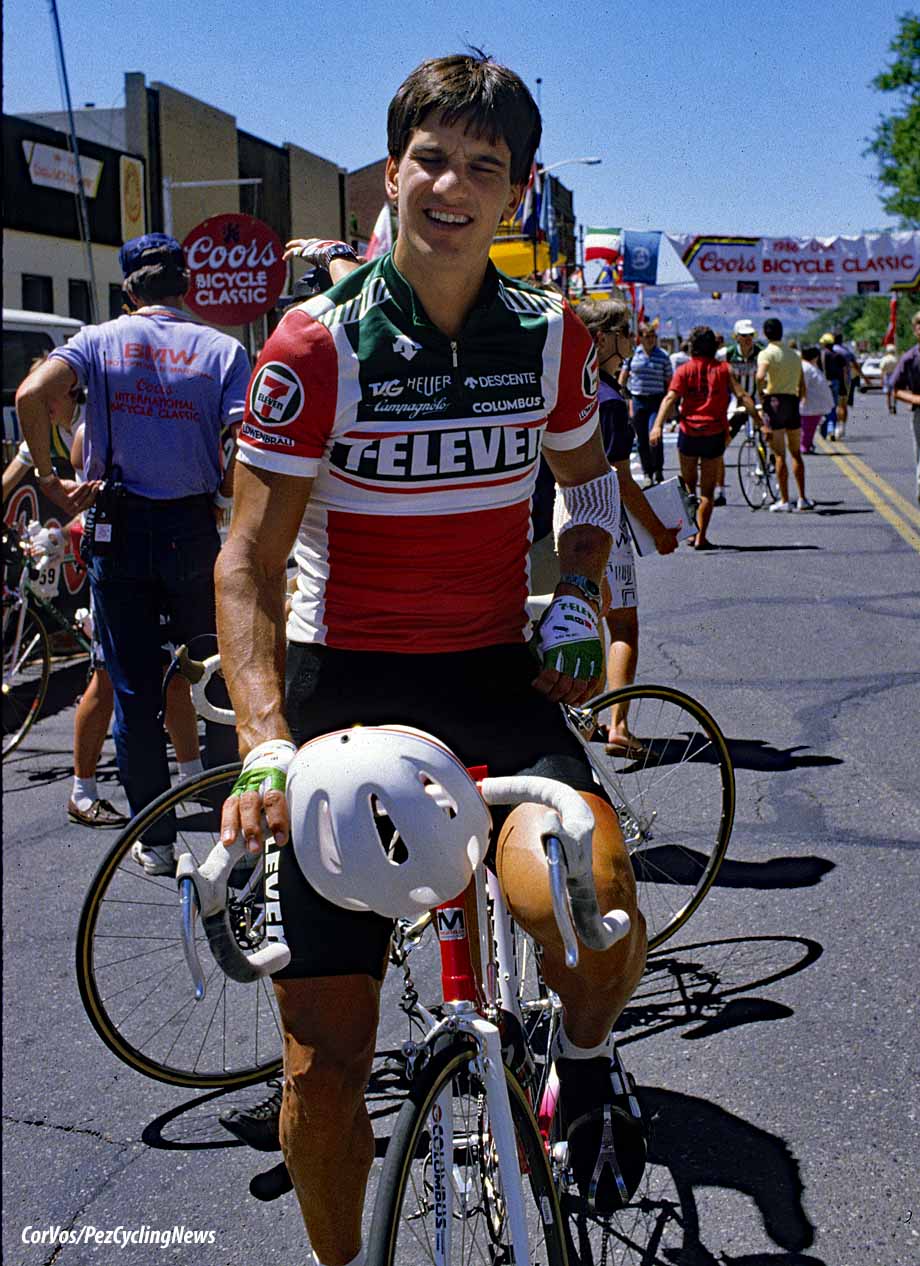 Lake Placid, USA 1980 and the XIII Winter Olympics. The Man of the Games? With his 32” waist and 27” thighs clad in that famous gold suit, the very epitome of power and grace there could only be one. Eric Heiden.

The man from Madison Wisconsin won all five gold medals in the long track speed skating over distances from 500 meters to 10,000 meters setting five Olympic and one world record in the process. That 10,000 meters record was just one of 15 he set during his speed skating career, not to mention seven senior world championships. And he wasn’t a bad cyclist either, part of the now legendary red white and green of the 7-Eleven team. Taking the first US PRO Championship and riding the Worlds, Giro and Tour. Thanks go to PEZ friend Mike Engleman who connected us with Eric at his home in Park City, Utah.

PEZ: You dominated the long track speed skating at Lake Placid in 1980 but you also skated at the 1976 Winter Olympics in Innsbruck where you were 7th in the 1500 meters and 19th in the 5,000 meters – was that the inspiration for Lake Placid?
Eric Heiden: I set myself goals and a big one was to make the ’76 Olympic squad – I was satisfied with that, but I lost perspective just being happy to have made the team. It was different at Lake Placid in 1980, there were no distractions; I was there to do business. 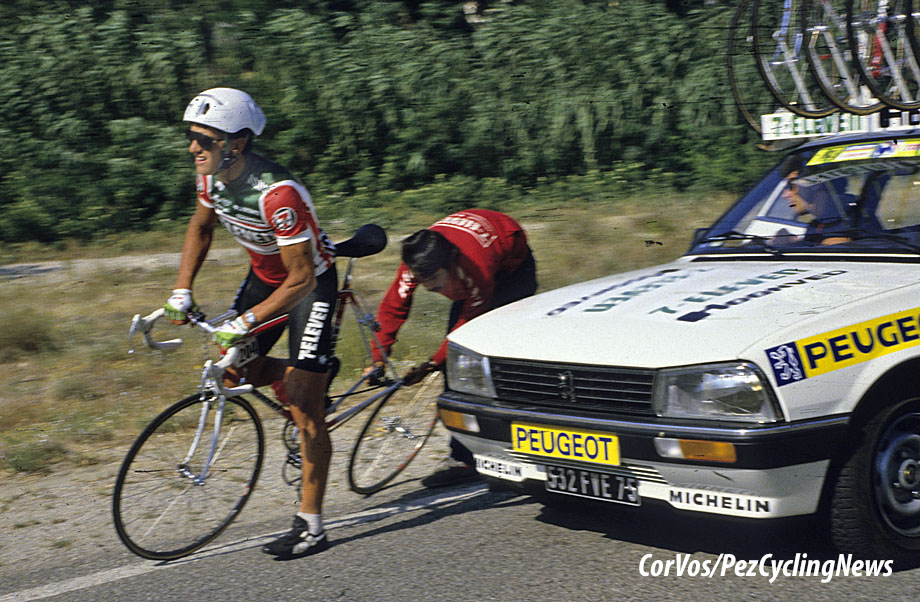 Wheel change at the Tour

PEZ: You broke 15 world records during your career, is there one which gives you particular satisfaction?
The 10,000 meters at the Olympics, that was special, beating all the best guys at that distance and taking the world record by almost six seconds.

PEZ: It’s not so well known that you were also a multiple world champion on the ice.
It’s known within the skating community but skating isn’t so well known by the general public outside the Olympics. I’m proud of those world championships performances up against the best guys in the world. 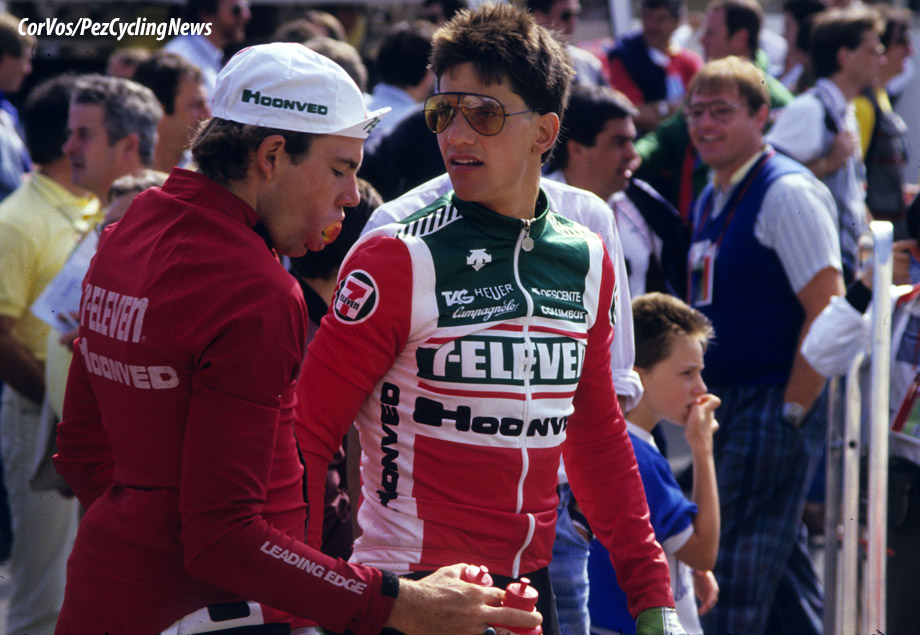 PEZ: At Lake Placid you won sprint and endurance medals – 500 to 10,000 meters, not easy.
They all require different physiology, yes. You’re looking at just over 30 seconds for the 500 up to nearly 15 minutes for the 10,000 – when I look back I’m more impressed at what I did, especially in the 10,000. Back then guy were starting to specialize but much more so now.

PEZ: But you never seemed comfortable with the fame?
I always struggled with that side of things but it was to my advantage, it opened a lot of doors for me, when I was studying to be a doctor the doors to the best colleges opened for me. So I guess I did well on the coat tails of fame. 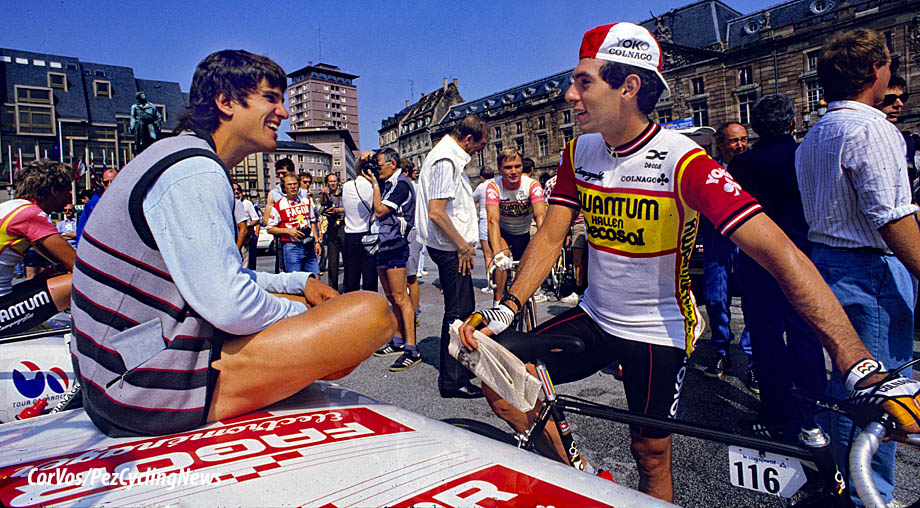 A chat with Doug Shapiro

PEZ: Was cycling a part of your training for skating?
A big part. There were no 400 meters rinks for me to train on in the summer so I’d work out on the bike two or three times each week and I did have it in my head that I’d like to be a pro bike rider one day.

PEZ: And I have to ask – the gold suit?
A year or two ago I got a letter from the Smithsonian Institute in Washington, the world’s largest museum, education, and research complex. They asked me if I’d be prepared to let them exhibit it and I was very honored to accommodate them. 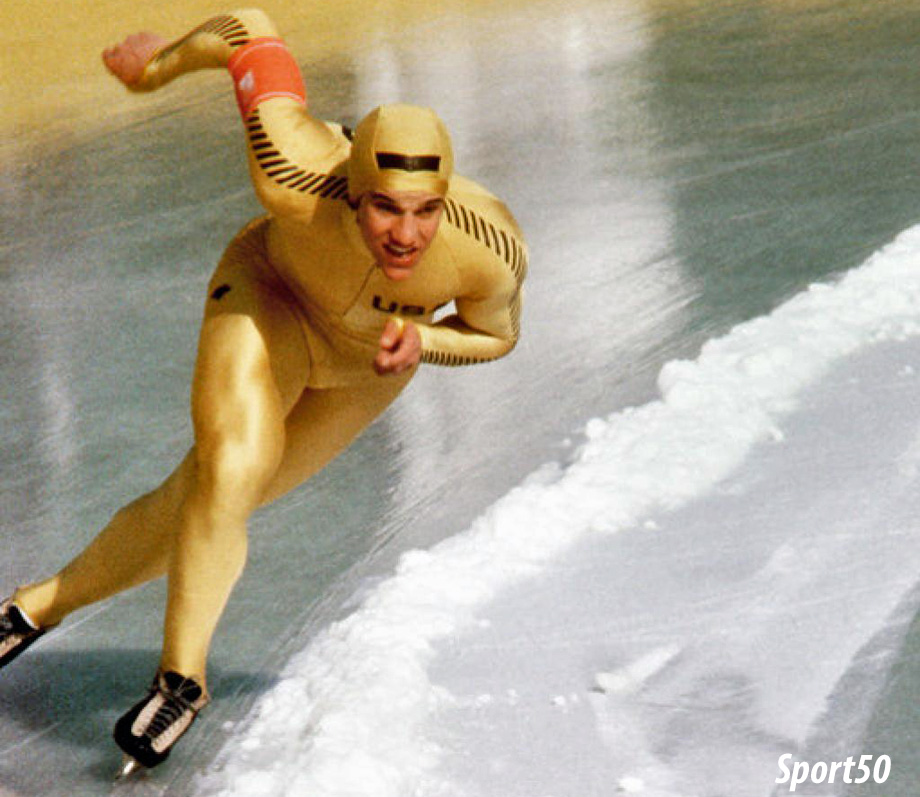 PEZ: And you’re still involved with the skating world as the US team physician.
I went to the 2014 Sochi Olympics in Russia with the team, but now I’ve stepped back a little and act as a consultant – I’m always available to speak to if they need to.

PEZ: The 7-Eleven team and a pro biker career?
I was lucky in that I knew Jim Ochowicz, who’s now team manager with the CCC World Tour team, he was speed skater and racing cyclist and manager of the US skating team. We’d discussed the fact that he was putting a team together sponsored by 7-Eleven and as my skating career came to a close I wanted to be part of his new team. 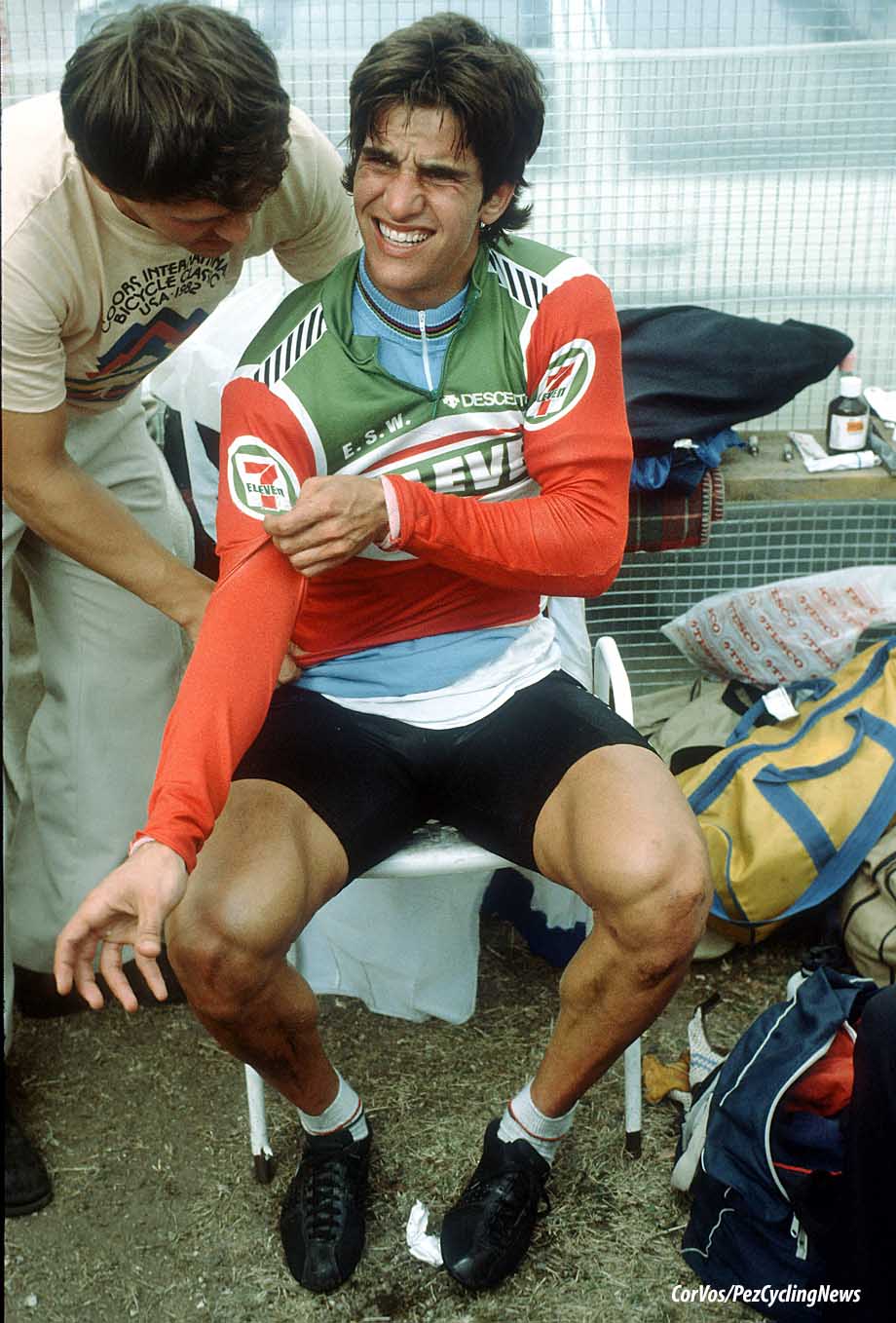 PEZ: No amateur career then, straight in as a professional?
As a skater I had ridden local and state races at amateur level but with 7-Eleven I was able to pursue my dreams of being a professional cyclist.

PEZ: How were you accepted by the professional bike riders?
They took me in and welcomed me with open arms; many of them knew me from my local and state races. There was a lot of cross over between skating and cycling in those days. 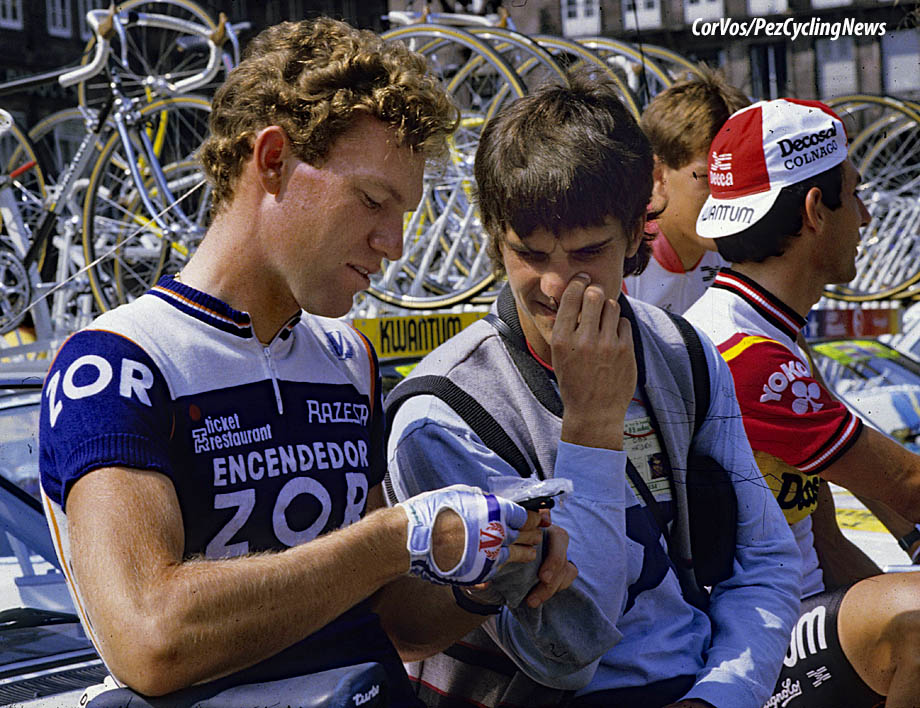 PEZ: Can you remember your first professional race?
It was probably a criterium on the east coast, nothing special but I had a lot of respect for those guys so I would have been nervous. And I had to handle a lot of expectation from the crowd, they think that because you’re a champion skater you’ll be able to ride away from these guys – that was hard to live up to.

PEZ: In ’85 you won the US Pro Championship beating Jesper Worre and Jens Veggerby – handy guys – so you weren’t a bad rider by any means.
I worked hard and was in good shape, my role was that of a helper that day but the break I was in stayed away and I took my opportunity. 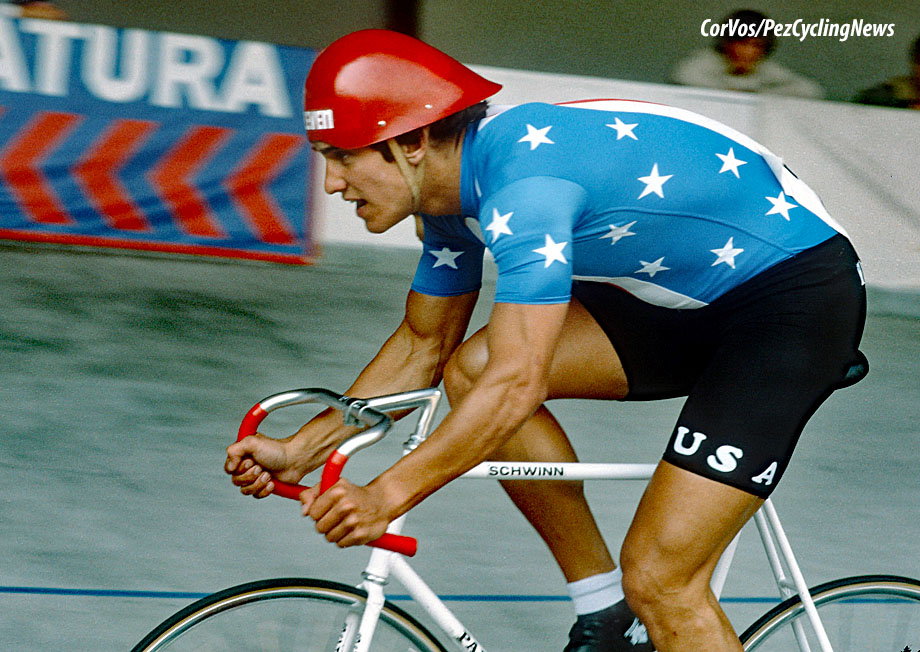 PEZ: You rode The Worlds?
Yeah, I rode the pro pursuit in Brno, Czechoslovakia in 1981 and I started in the Road Worlds at Goodwood, England in 1982 too, but was DNF. I’d realized though at that point I was in over my head. (Eric also started the Road Worlds at Montello, Italy in 1985 but was DNF – as were the likes of Hennie Kuiper and Bernard Hinault, ed.)

PEZ: The Giro 1985?
That was an eye opening experience, you can have nothing but respect for those guys, racing like that, day after day. The first couple of days were long stages with some climbs and I thought I was in big trouble because it wasn’t going to get any easier but to be part of that experience was amazing. We won Stage 15 with Ron Keifel and Stage 20 with Andy Hampsten who was also top five in the mountains and young rider categories. (Eric finished 131st @ 3:21:09 on final GC. ed.) 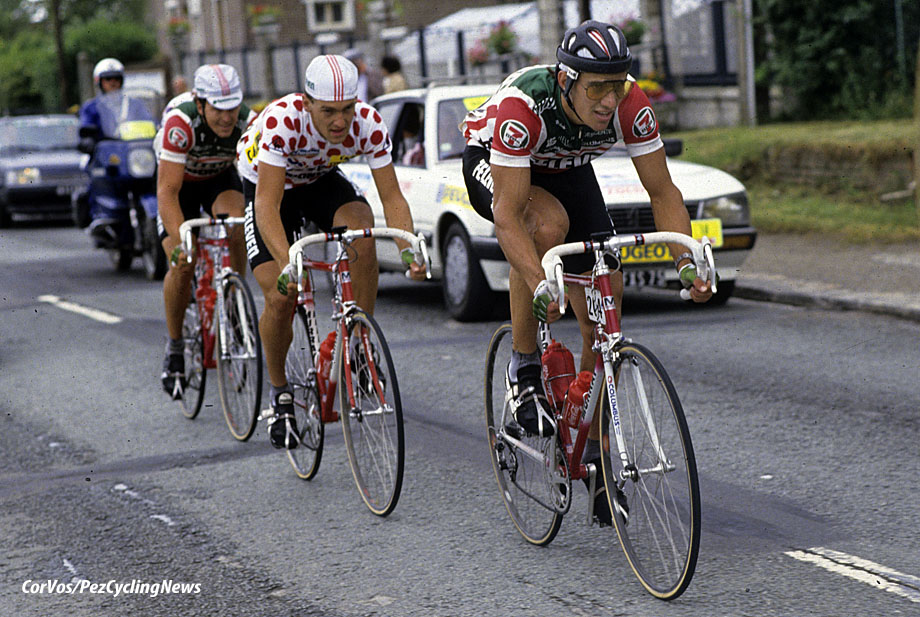 Working on the Tour’86

PEZ: And le Tour in 1986?
I was anxious at the start of that one but we had a great group of guys who all became very good friends of mine. The start of that race was crazy, we went from the extreme excitement of Alex Stieda taking the yellow jersey after Stage One to trying to make sure he beat the time cut in the Stage Two TTT. But those first few days were over the top successful for us with Alex in yellow and Davis Phinney winning Stage Three to Lievin. Unfortunately I crashed out on Stage 18 of the race. 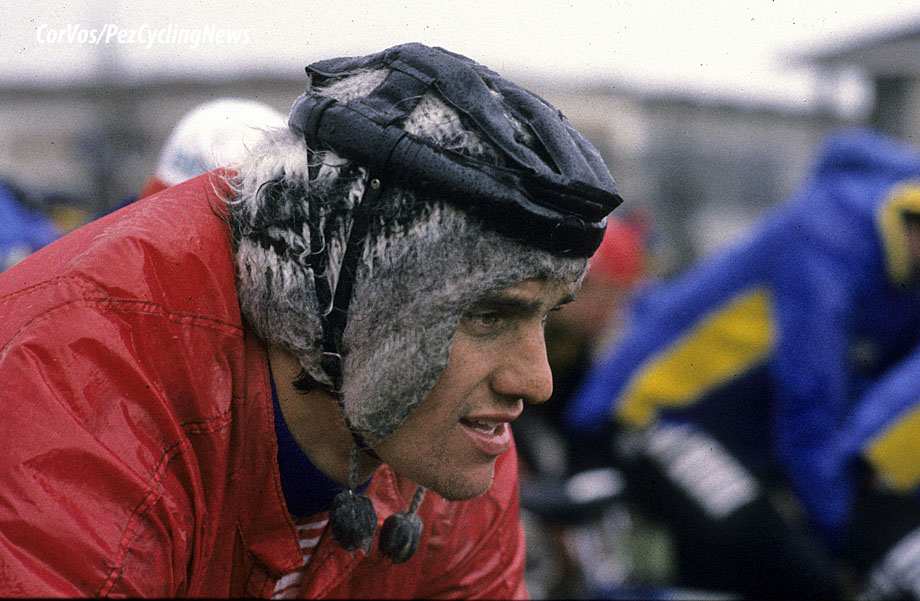 It can get cold on a bike too

PEZ: How many years did you ride with 7-Eleven?
I turned pro with the team in 1981 and 1986 was my last serious season, I went to school after that although I did ride a few races here and there in 1987, but nothing serious.

PEZ: But you stayed on with the team in your role as doctor?
Yes, 7-Eleven allowed me to travel with the team, while I was at medical school, as assistant to the team doctor, Max Testa with whom I’m still very good friends – he lives one kilometer away from me. 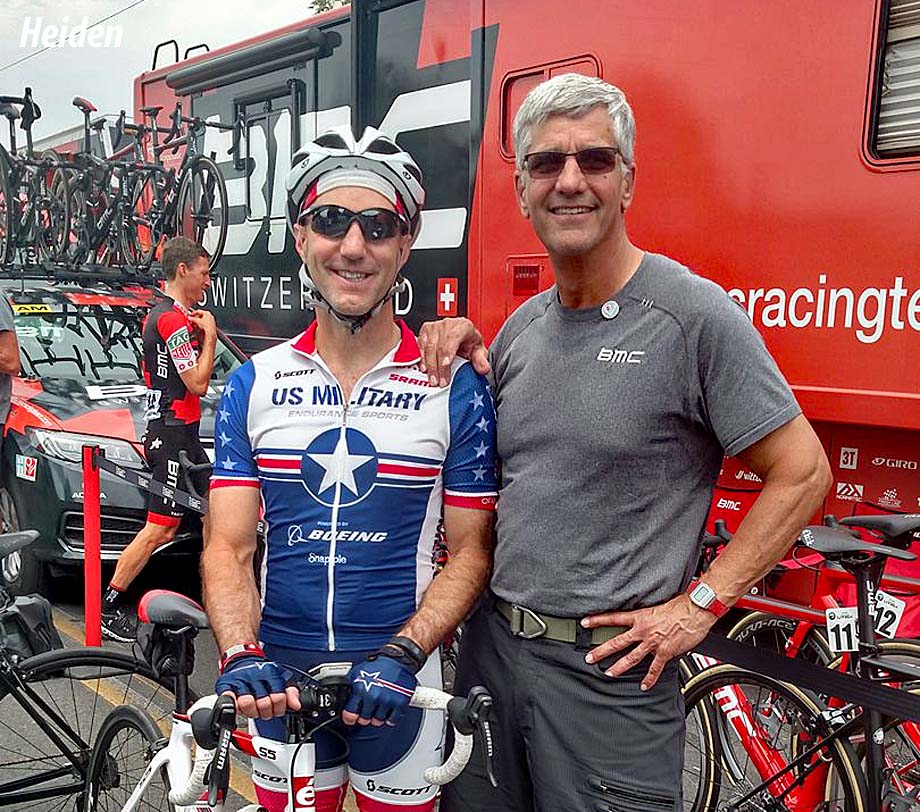 PEZ: And you’re still involved as a team doctor?
Yes, with the CCC WorldTour team and before that with BMC where Jim Ochowicz was manager. A team at that level needs a doctor to travel with it, if a rider gets sick on the road you can’t mess around trying to find one. There’s so much money invested in teams these days and the sponsor wants return on their investment.

PEZ: With hindsight?
I have to tell you, I’ve had a good life, I wouldn’t change much – perhaps I should have taken more advantage of some of the opportunities but overall, no regrets. 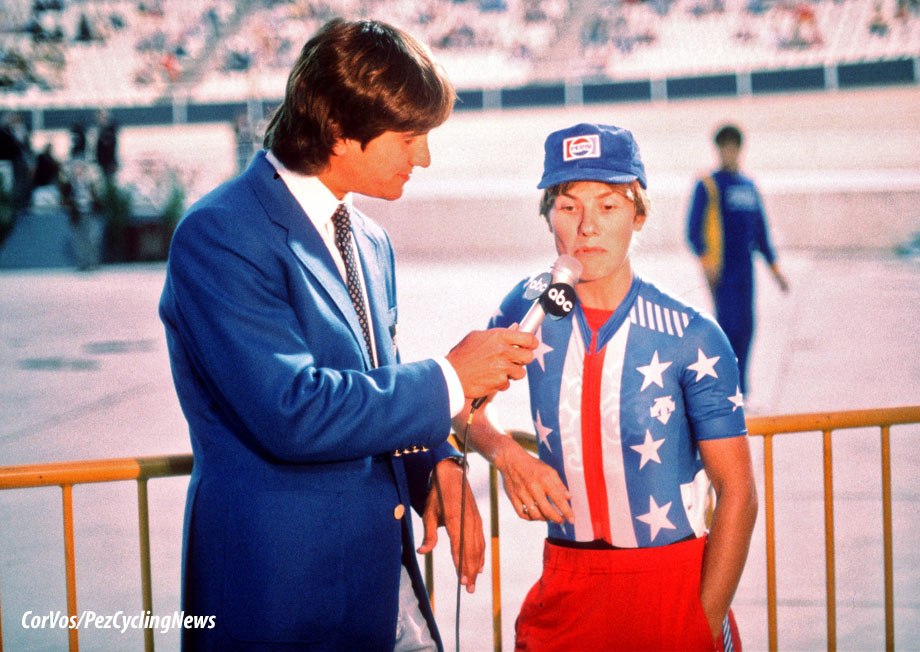