Drawn from the one of the world’s finest collections of cycling artifacts, the latest cycling book from Velopress, ‘Goggles & Dust’ collects over 100 stunning photographs from competitive cycling’s heyday in the 1920s and ’30s. PEZ’s Literary Editor Leslie Reissner goes back in time to review this book of truly classic images from Europe’s most hallowed races.

Photography and cycling both came of age as technologies in the late 19th Century and were joined with the development of epic European road races. A new horizon was opened up for sports photography as newspapers, often sponsors of the events, demanded powerful images delivered in a timely fashion.

As photography moved forward so did the development of racing to include the elements we know today: disciplined teams; brilliant landscapes; high-tech equipment and superbly paved serpentine mountain roads with high-speed descents. But it was not always so and this is obvious leafing through the lovely little book “Goggles & Dust” from the Horton Collection. 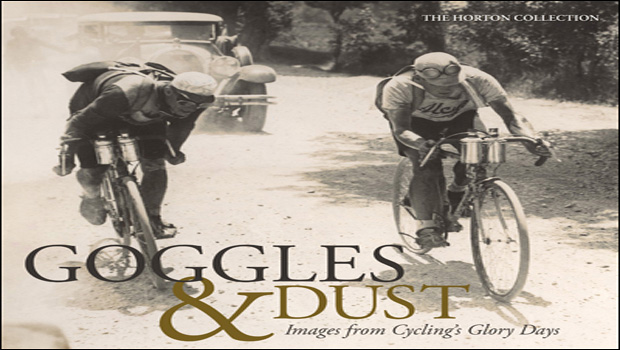 Brett and Shelly Horton have over the years amassed an impressive collection of bike racing memorabilia, ranging from old bicycles to jerseys, trophies and accessories but over the course of the years have also obtained photos, originally to document and complement the other items in the collection. It must have come as something of a shock to inventory the photos and discover more than 350,000 original images.

From this massive mother lode it must have been difficult to make a selection for this new book, although clearly the Hortons would have wanted to avoid duplication of the photos in their previously-released book covering racing from the 1940s through the 1960s, The Golden Age of Cycling. Their decision was to cover the first four decades of the 20th Century and the book is subtitled “Images from Cycling’s Glory Days.” 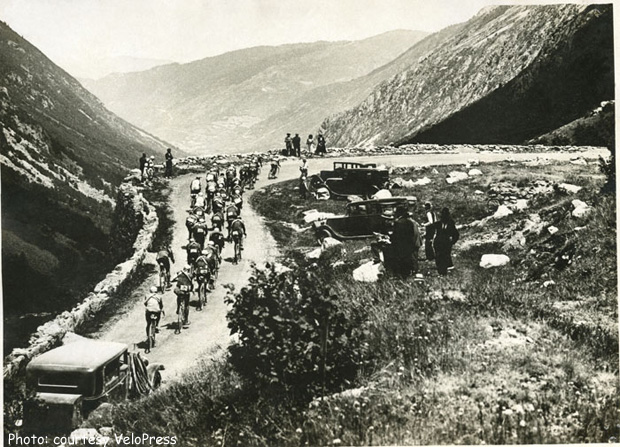 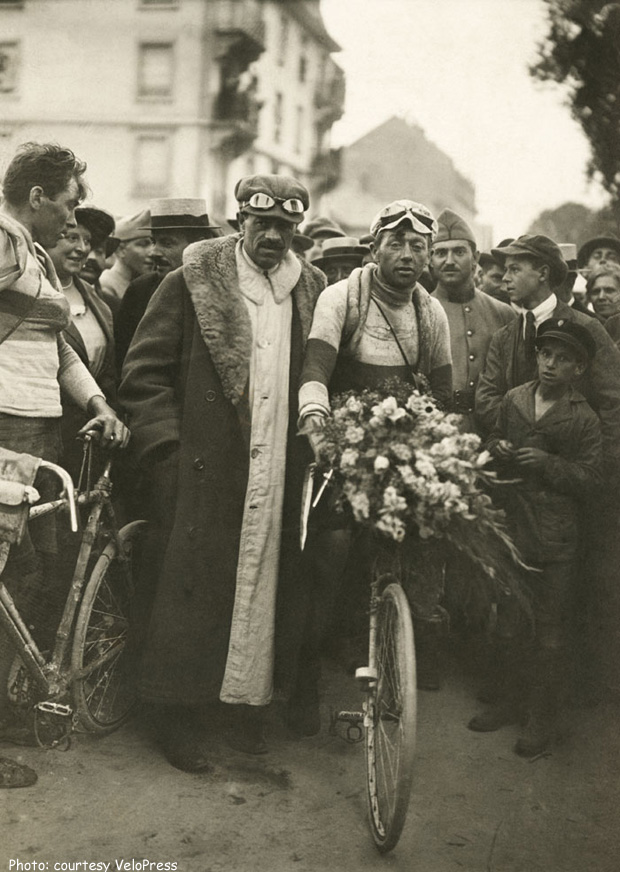 They may have been glory days, those early years when road racing was novel and one of the most popular sports in the world. But it certainly was not a lot of fun for the principal actors and one cannot but admire the cyclists in these photos, pioneers in the establishment of professional sport, as they are pictured grinding up mountains on their heavy bikes, dragging them through muddy ruts and, in that time before team cars, radios and quick bike changes, doing an awful lot of roadside repairs.

The bikes were primitive and the roads to modern eyes look dreadful. The photos do not reveal much of the joy of competition but brutal hardship. As noted in the book’s introduction the 1926 Tour de France was 5,745 kms over 17 stages, compared to today’s 3,400 kms or so over 21.

The riders are almost always wearing heavy long-sleeved jerseys festooned with tubulars across the shoulders and everyone wears goggles (in some cases two pairs!) as protection from the relentless dust of the gravel roads. The organization of everything is so simple, whether at food stops or finish lines. And one is struck by how old many of the riders, who would have only been in their 20s or early 30s, appear to us today – old and exhausted. Victor Fontan, who was 36 at the 1928 Tour, looks to be 76. 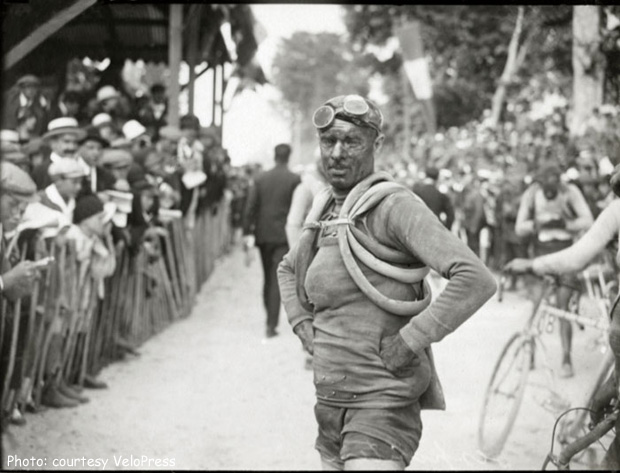 Most of the photos have not been previously published and while some are recognizable from a series, such as the one of Gino Bartali crossing the Casse Déserte on the Col d’Izoard in 1938, but others are quite new including the start line of a 1911 race for cyclists weighing at least 100 kg (220 lbs)! 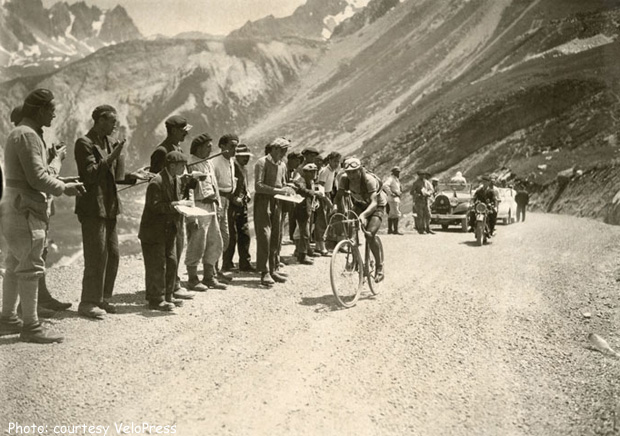 The names of those photographed include Tour de France legends Eugène Christophe, André Leducq, René Vietto, Antonin Magne and Ottavia Bottechia but others would be less familiar to today’s readers.

The photos are consistently interesting and nicely reproduced. “Although the photos are derived from an original negative or a print made from that negative, all of the images…have undergone some degree of restoration” writes Brett Horton in the introduction and this gives the photos a welcome freshness and makes for an attractive presentation on the whole. Each photo indicates who is in the picture, what the situation is and often a few words (very few) of description. This might be the only fault of the book as an appendix with more details of the circumstances surrounding the images would have been welcome. The photos are very much close-focussed on the riders with comparatively little attention to backgrounds or scenery and a few more photos like the Izoard one would have been welcome too.

Was there any other professional sport as well-documented by photographers in this period as bicycle racing? There are excellent photos of team sports such as baseball from the period, as well as boxing and tennis and the Olympic Games (well, amateurs only there!) but one is struck by the feverish activity displayed in the cycling photos, a dynamism that is not always there in the visual documentation of other sports in the early 20th Century. The photos from the 1930s are in my opinion the best in capturing the action and personalities of the racers. Antonin Magne was one slick dude with perfect hair apparently. 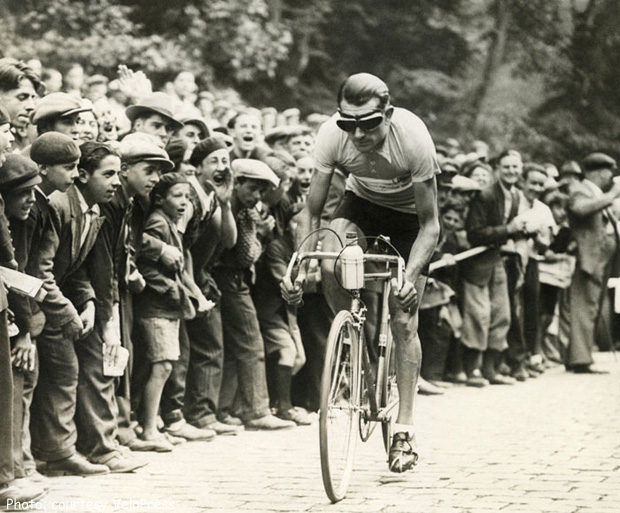 “Goggles & Dust” is a very fine collection of black and white photos covering the formative – and brutally hard – years of road racing. LLeafing through this small volume makes one curious as to the photos that had to be left out for reasons of space and it is to be hoped that this is only the first in a series from the depths of the Horton Collection archives.

Republished with permission of VeloPress from Goggles & Dust: Images of Cycling’s Glory Days courtesy of The Horton Collection. Preview the book at www.velopress.com/goggles.

• Buy it at Amazon.com here

When not doing his utmost training to avoid being a candidate for a 100 kg+ cyclists’ race, Leslie Reissner may be found dieting at www.tindonkey.com