Belgium, or more precisely Flanders, in the third weekend in November is the place to be, a mecca for winter cycling fans. With the Gent ‘6 Day’ and two top cyclo-cross races it’s the centre of the universe. Ed Hood is usually working in the bowels of the velodrome, but this year he was there just for the fun.

In theory, with 15 minutes to go in the final madison of the Six Days of Gent, there were three possible winning teams: Vergaerde/De Buyst, Van Hoecke/De Ketele and. . . Keisse/Mørkøv. 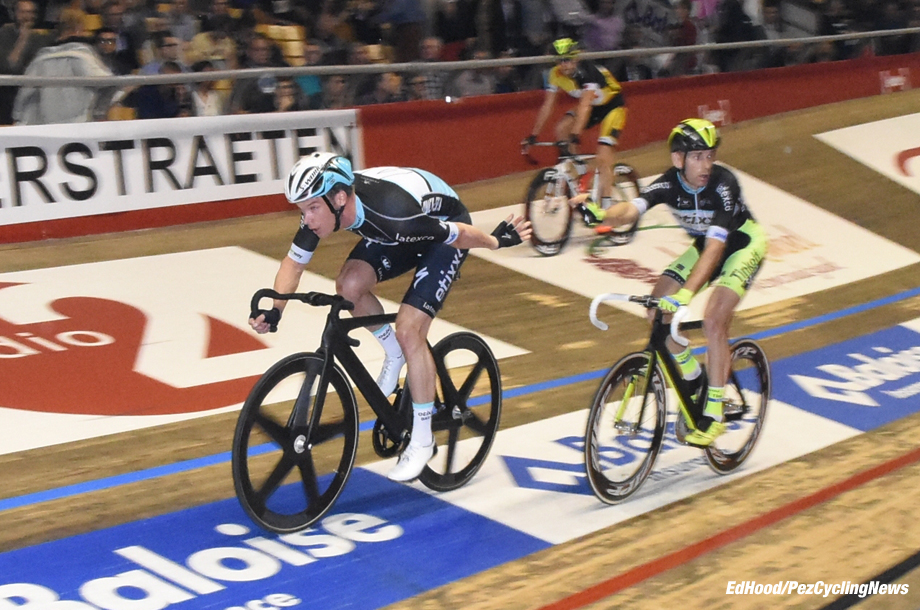 But in reality there was only ever going to be one winner of this race; ‘King Keisse of Kuipke’ backed by the only man who can match Gentenaar flyer Iljo for smoothness, Copenhagen’s Prince of Denmark, Michael
Mørkøv. 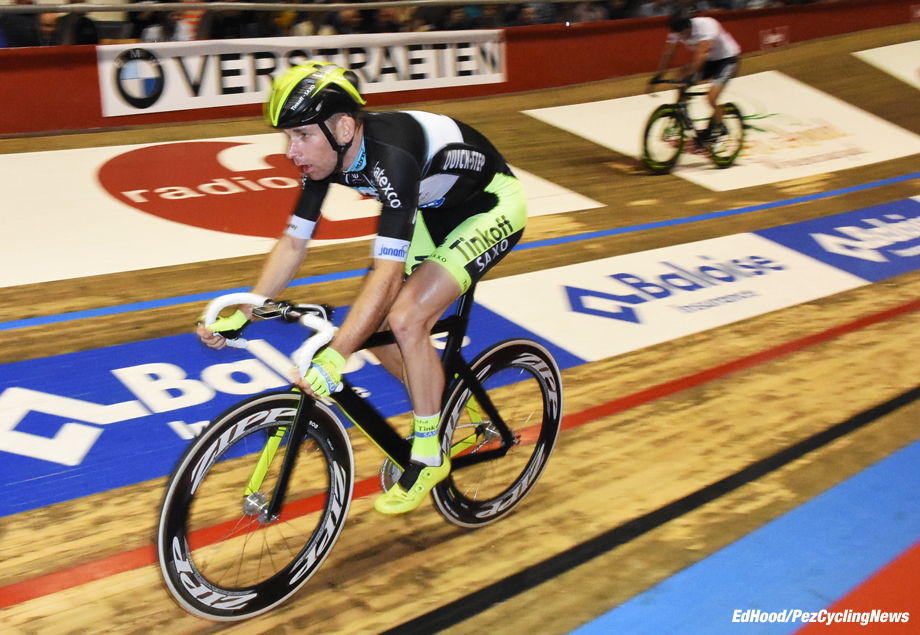 The flying pair took a late lap to seal it and the crowd went home happy; we’d have preferred it to go down to the last sprint – it makes for a better show – but knowing Michael as we do he’d want to be sure of the win, you just can’t trust those Belgies in a sprint. . . 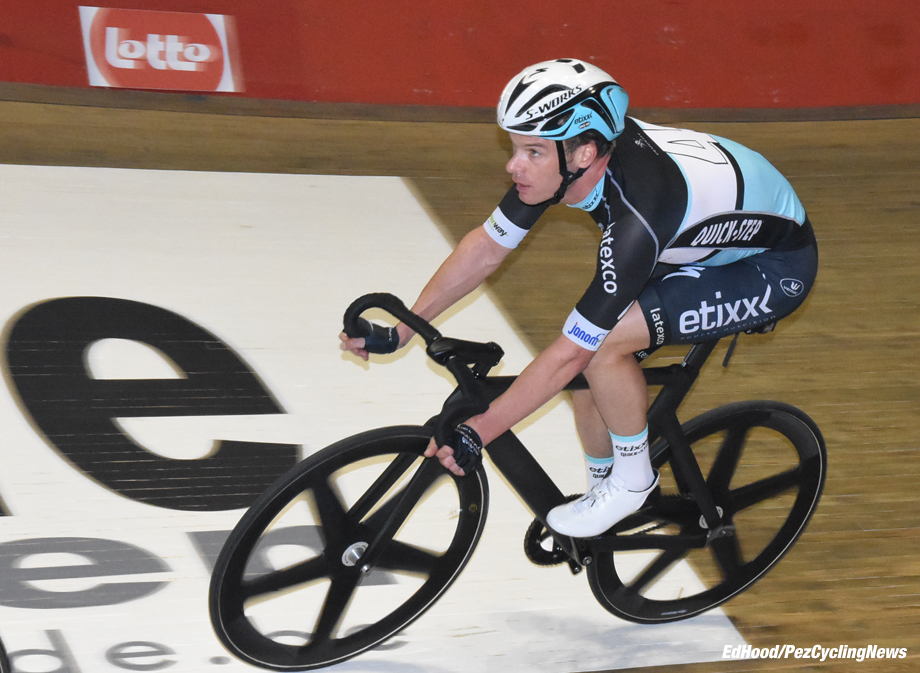 Iljo took his sixth Gent Six Day win to go fourth in the overall list of winners behind Patrick Sercu on 11, Etienne De Wilde on nine and Danny Clark on seven.

We’d arrived on Saturday morning, into Amsterdam airport, picked up our hire car and headed for Hasselt in Belgium – and once the venue for a short lived six day race – and the Category 1 cyclo-cross, we’ll pick up the story there. . . 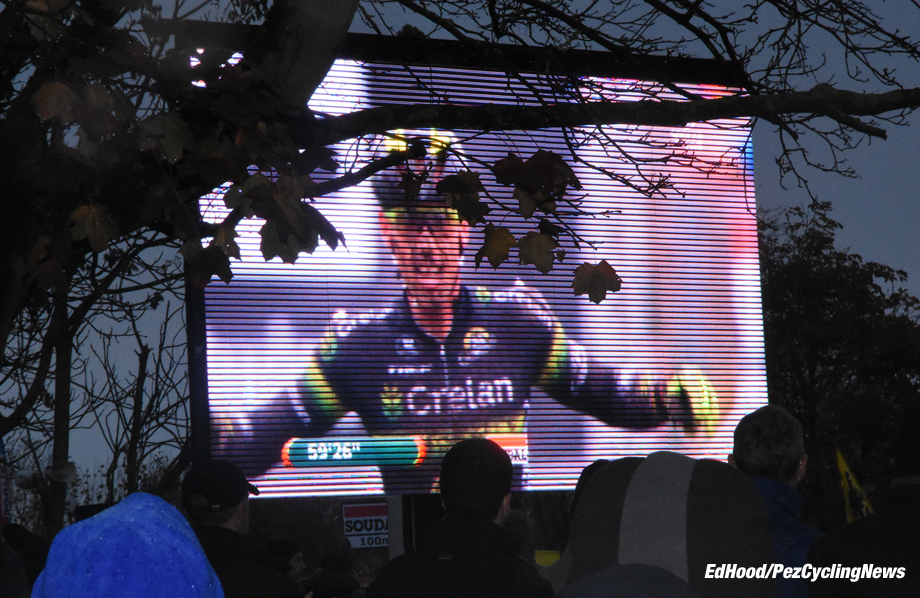 The two Sven fans in front of us hug each other; up on the big screen their boy coasts along the finish straight, arms in the air and a look of satisfaction on his face.

It may be his last season but it’s certainly not the dreaded, ‘one too many’. 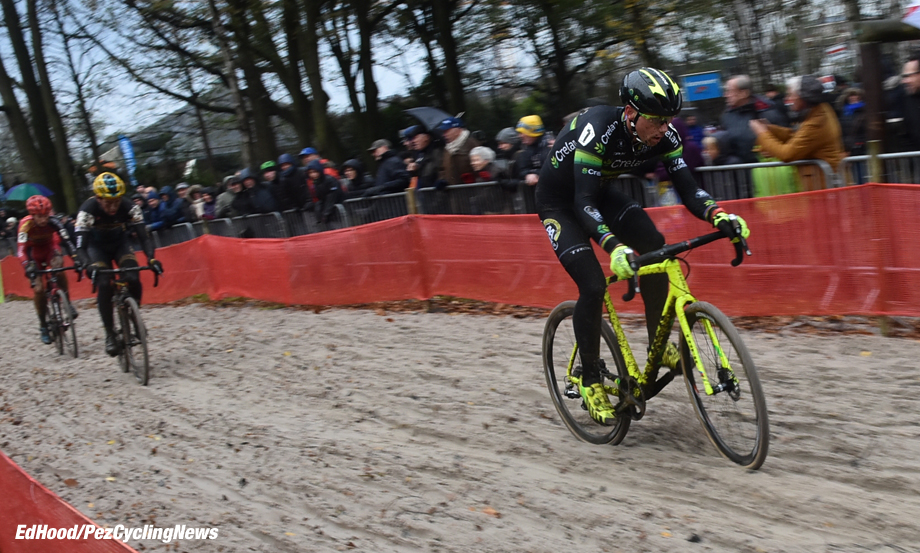 Sure, there was no Van Aert or van der Haar and Van Der Poel has been out – but second was Tom Meeusen and third Kevin Pauwels; ‘quality boys’ as the saying goes.

The weather forecast for Hasselt for Saturday afternoon was, ‘cold but dry’ – we got ‘cold, wet and grey’

Having paid our 12 Euros and slipped in past the gun, baton, gas and knife carrying cops we headed for the beer tent to escape the rain – big mistake. It was nuts, the worst Europop ever, no room to swing a cat and rubber booted X fans launching into impromptu dance routines. We downed our beers pronto and headed back out into the icy drizzle to watch the ladies’ race. 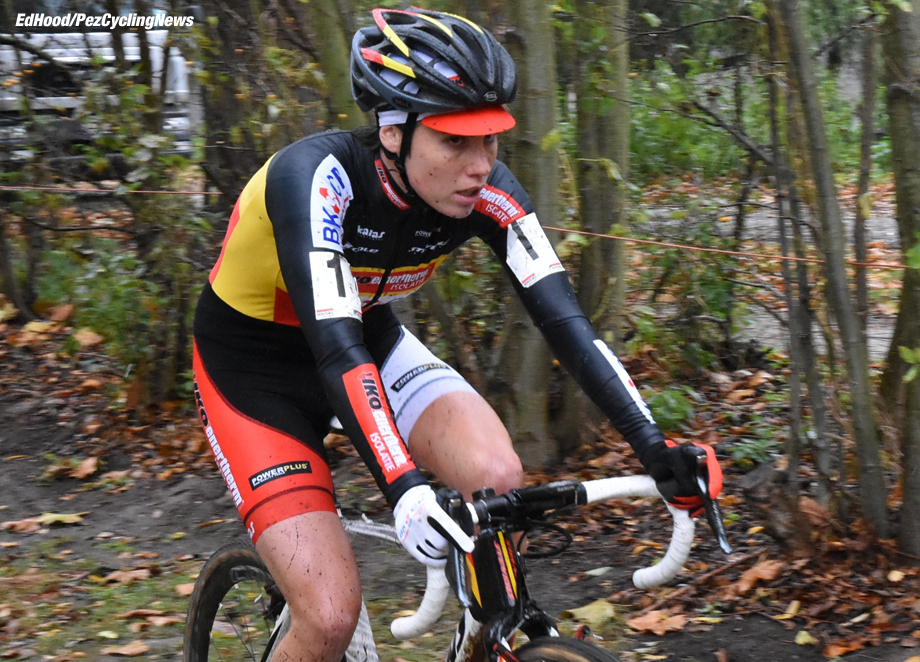 As with the men’s race, later on this misery of an afternoon, it became apparent within a lap that the list of potential winners was very short – just one, in fact; the slight Belgian champion, Sanne Cant who was in charges from the off. 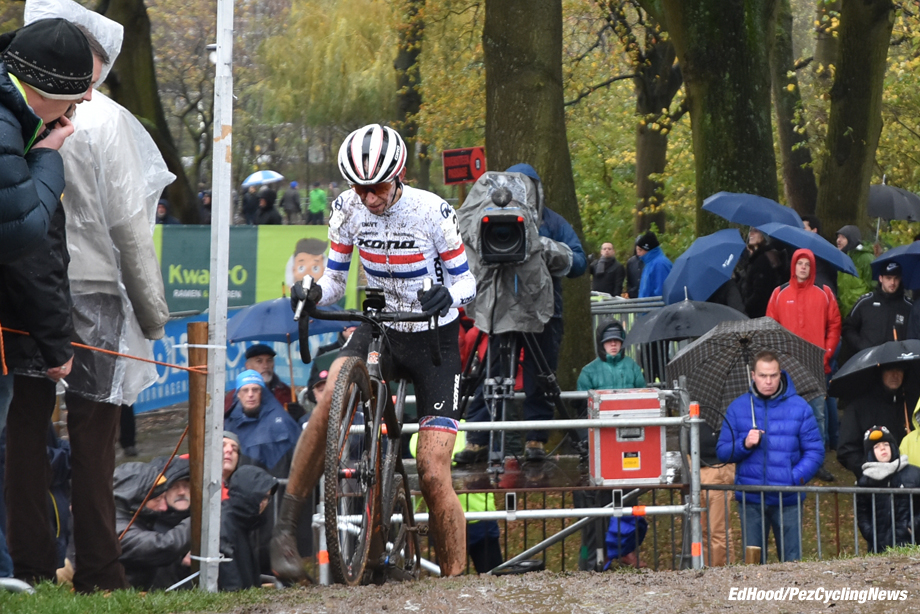 British champion, Helen Wyman’s white jersey shone through the gloom but no podium today – fourth. Cant won at a canter cruising the last lap to save a little for tomorrow’s World Cup at Koksijde – which she also won.

We had time for a nose round the camper vans before the men’s race. 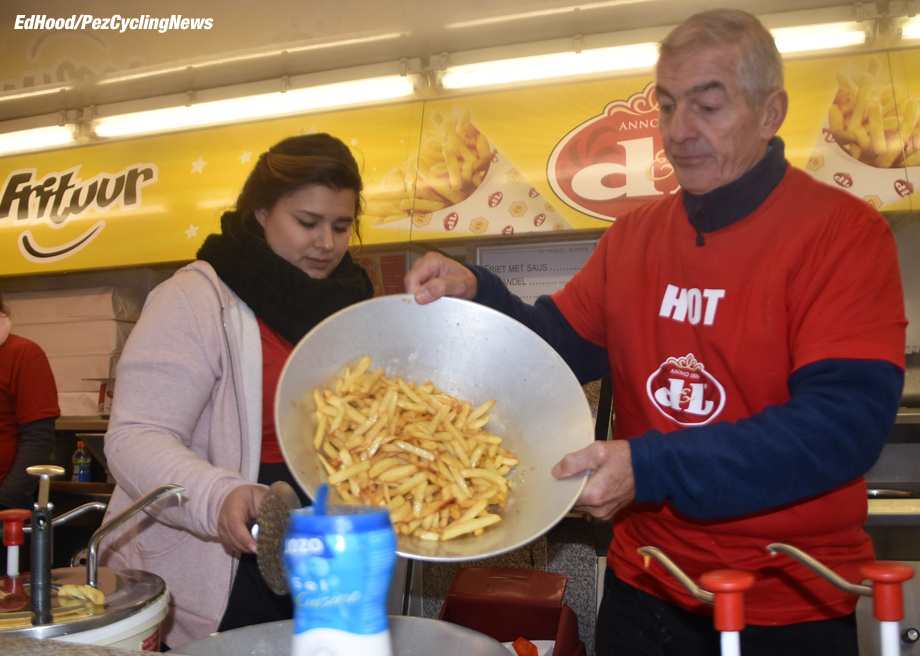 But not before we sampled the frites; Dave and Fraser with mayo, Callum with Samurai sauce and me on the Andalouse. . . 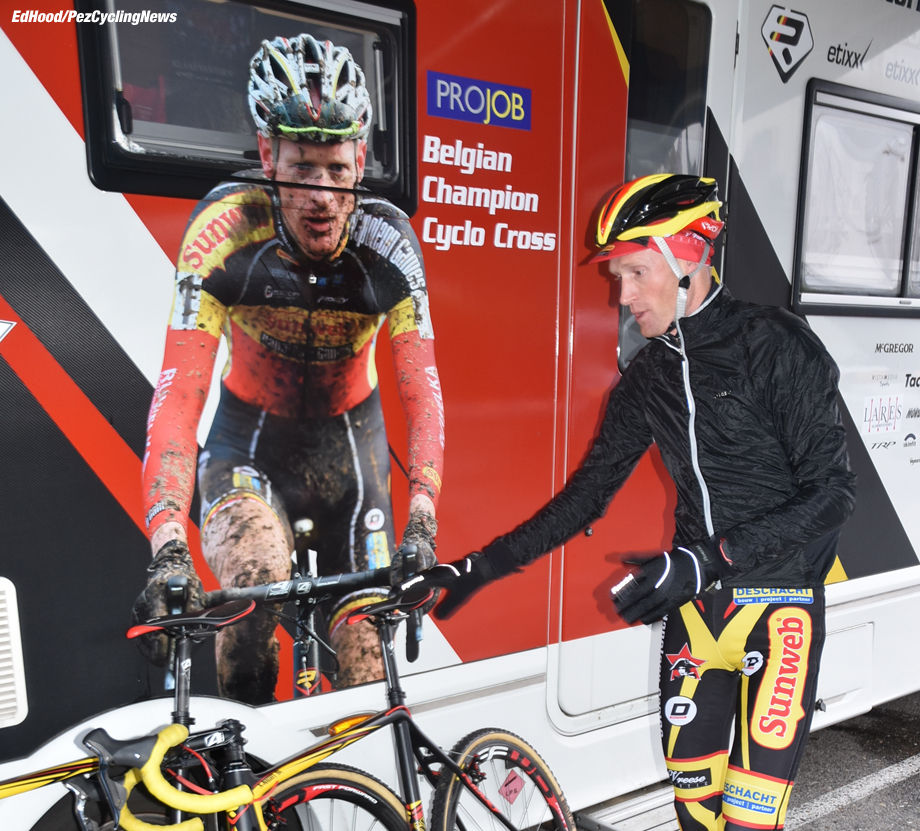 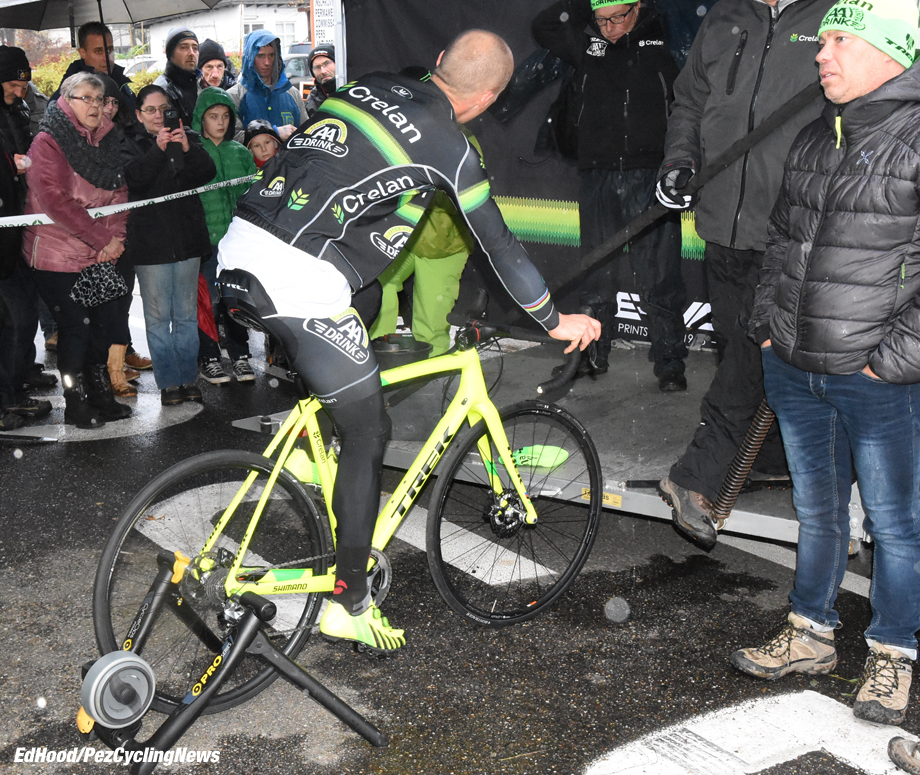 And whilst Belgian Champion Klaas Vantournout warmed up and headed off to the start untroubled by a solitary fan, Sven Nys’s camper was mobbed with supporters, happy to watch him spin on the turbo and prep for his 290th professional win.

Apart from Sven, Pauwels, Meeusen and Vantournout there was German champion, Marcel Meisen and Czech champion, Adam Toupalik. The parcours were highly technical with, concrete road, grass, mud, sand, drop offs, adverse cambers and steep banks to contend with. All ‘grist to the mill’ for an artisan such as Nys. Within a lap he’d blown the field apart with only Meeusen on the same page – it took Pauwels several hard laps to get back and make it three potential winner. Meeusen opened a small gap at one stage but it was apparent that Nys was rampant and wanted it more that the other two. Meanwhiles, Vantournout, Meisen and Toupalik all languished way back. 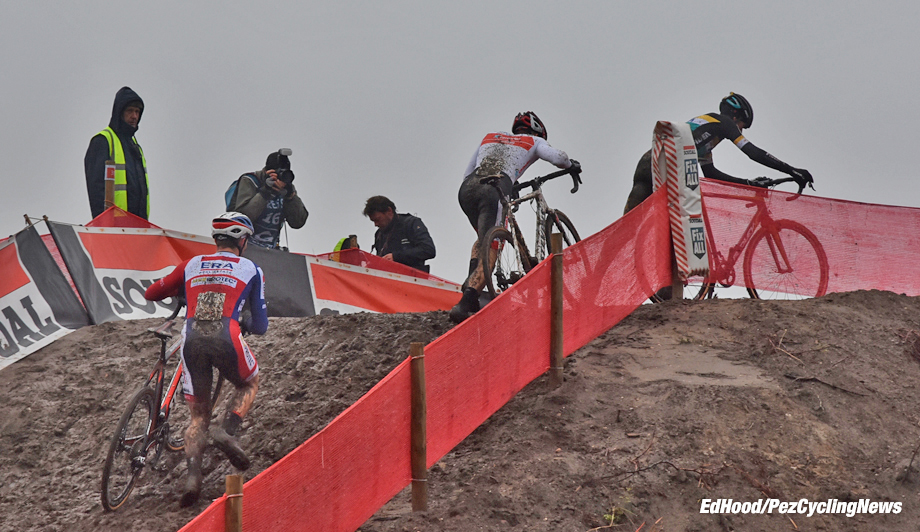 Nys’s superiority was emphasized on the climb over the huge mound of soil on the parcours – heaped up from a building project – where most ran but Nys powered the pedals all the way up and over like the ‘cross virtuoso that he is. Pauwels realized it wasn’t his day as the bell rang and coasted the last lap, third place secure and a little left in the tank for tomorrow in the dunes of Koksijde. 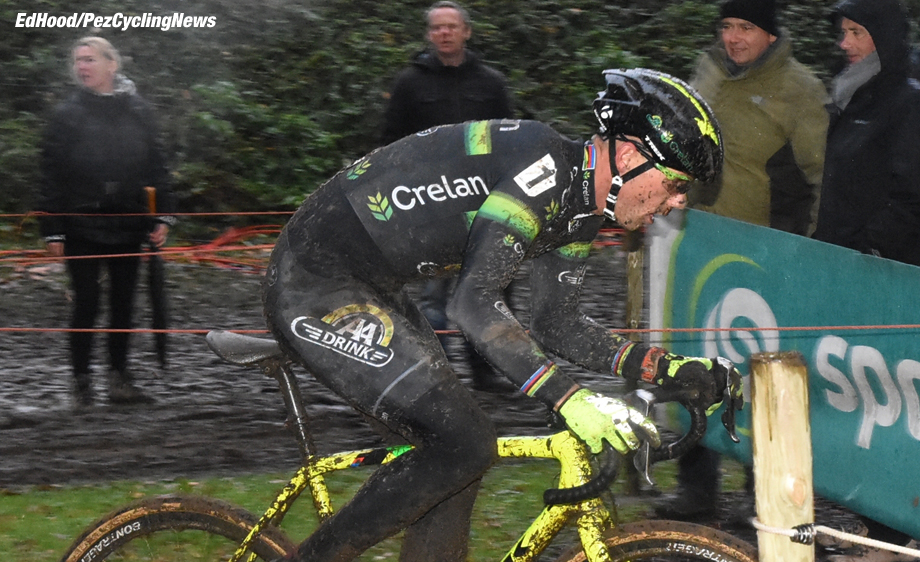 Up front, Nys put in the ‘dig’ which carried him clear and gave him the gap that Meeusen just couldn’t close. The cold, wet and challenging parcours had taken its toll on Meeusen and where there was smoothness of effort earlier in the day there rolling shoulders on the little rises as he battled in vain to get back to the man who’s won everything there is to win in modern cyclo-cross – and all with a smile and word for everyone. 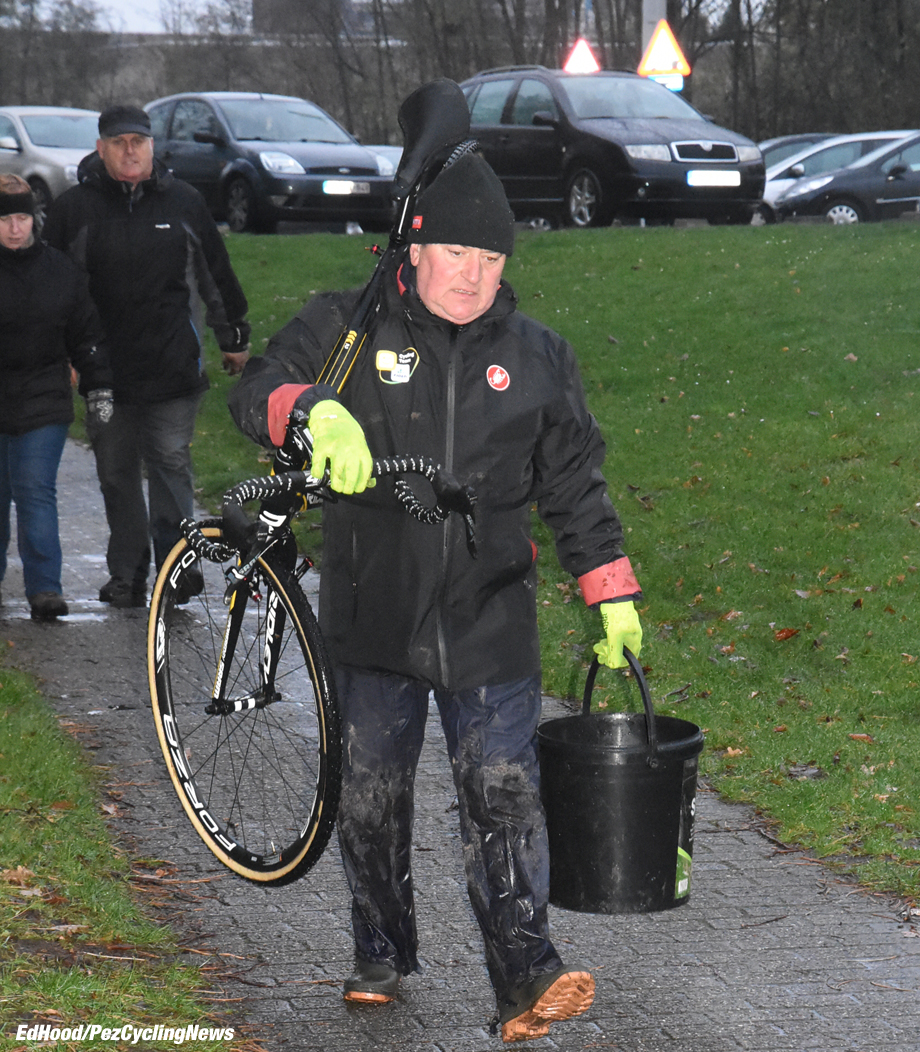 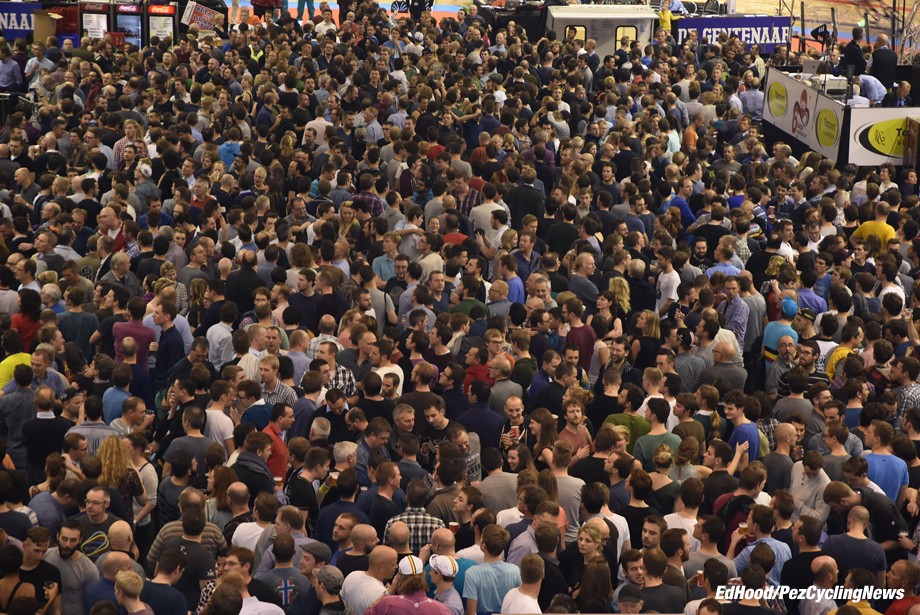 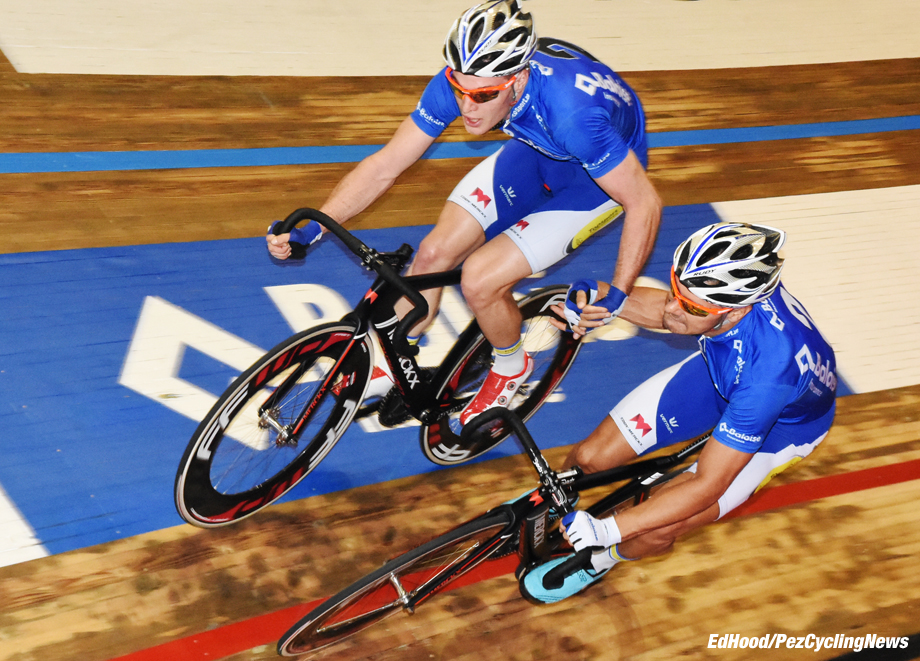 And whilst the Kuipke was rammed, the music good, the burger smells as heady as ever and the pils flowed, the big Saturday night chase wasn’t one to write home about. We missed the world’s worst pub singer, Garry Hagger who was the ‘entertainment’ on Wednesday but we were treated to Nicole and Hugo. 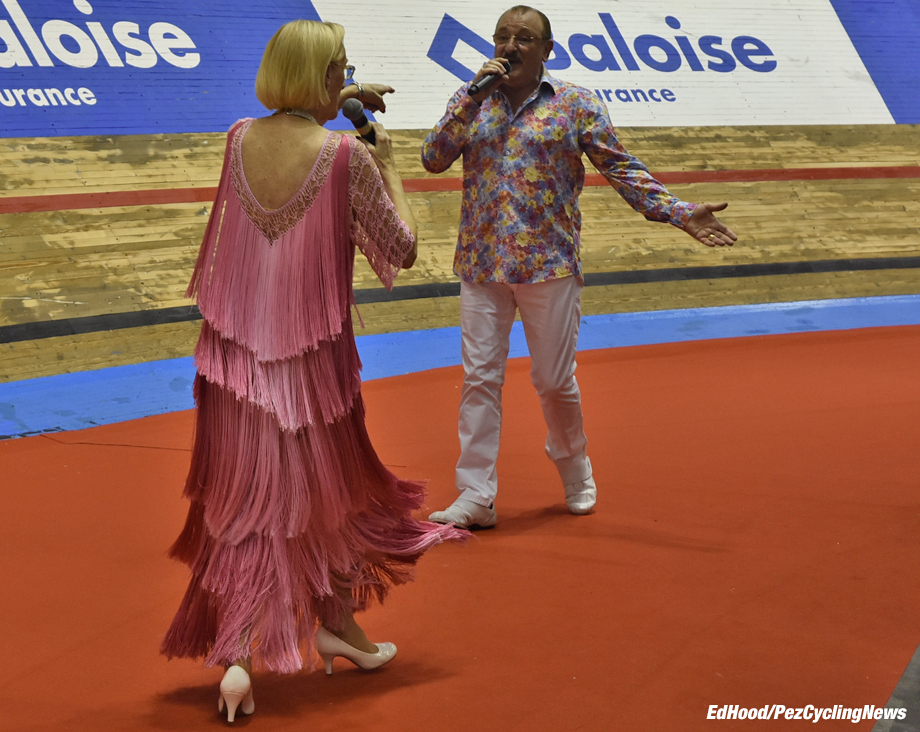 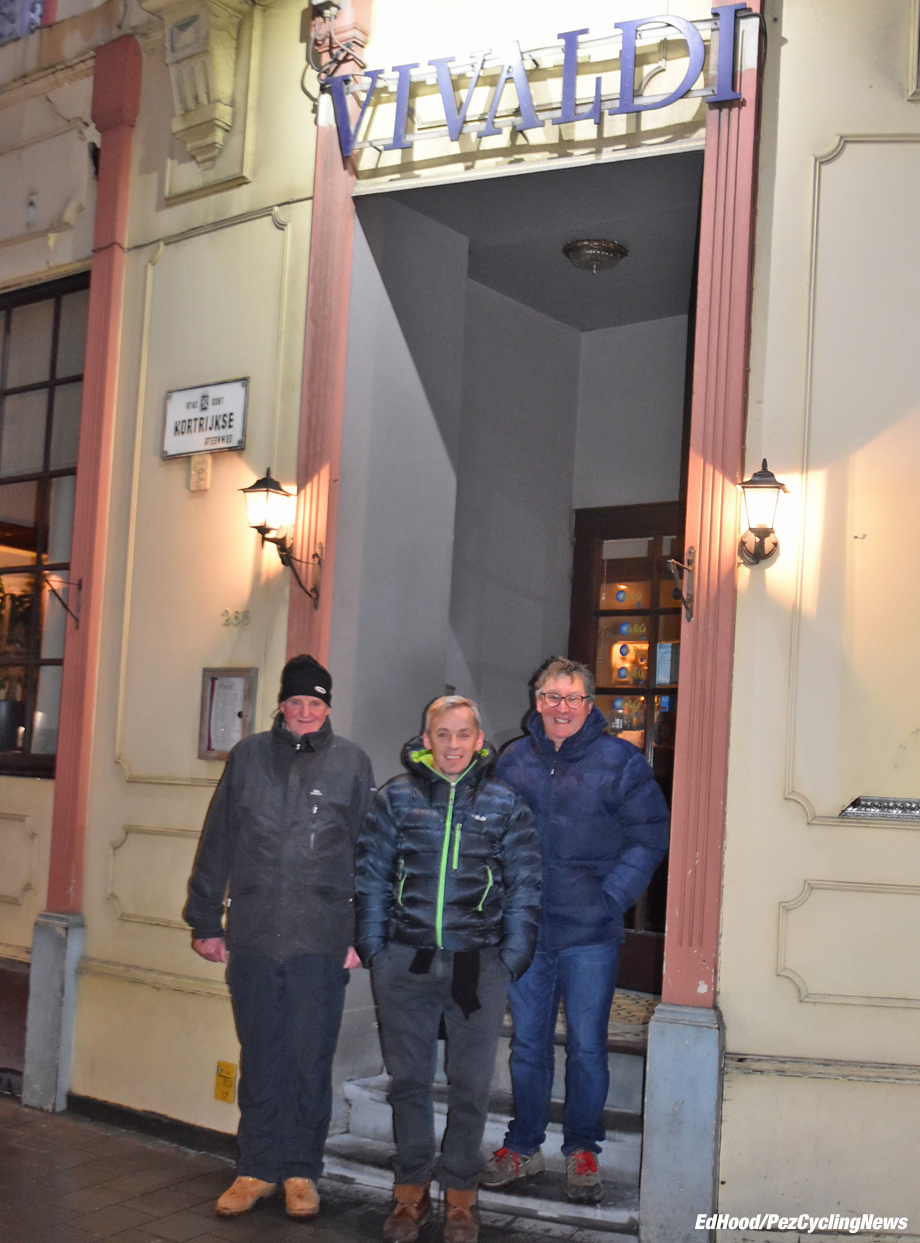 There’s little to say on this subject except that this was our cue to head for the Vivaldi. . .

Sunday dawned bright and clear – a pity we’d be indoors. 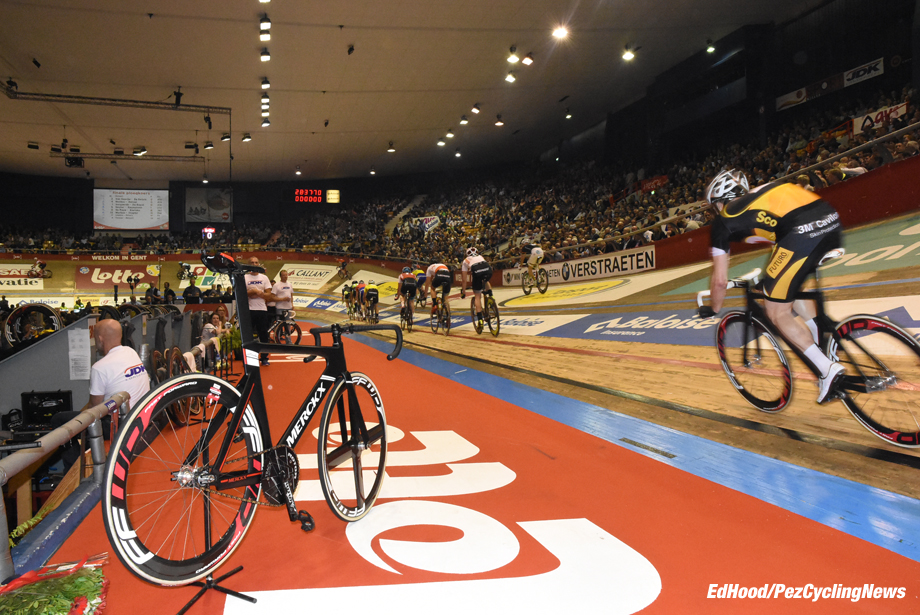 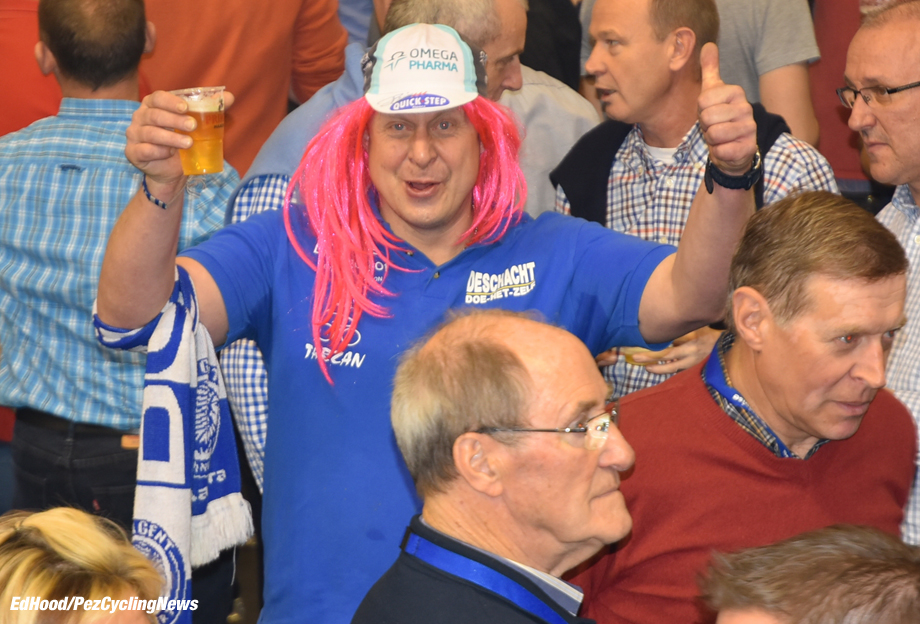 John Paul Young’s disco classic, ‘Love is in The Air’ fills the hall, De Ketele attacks, Iljo counters, the house is full, the pils pumps and whilst it may not be racing to send the connoisseurs into raptures, I can think of no finer place to be on a Sunday afternoon. 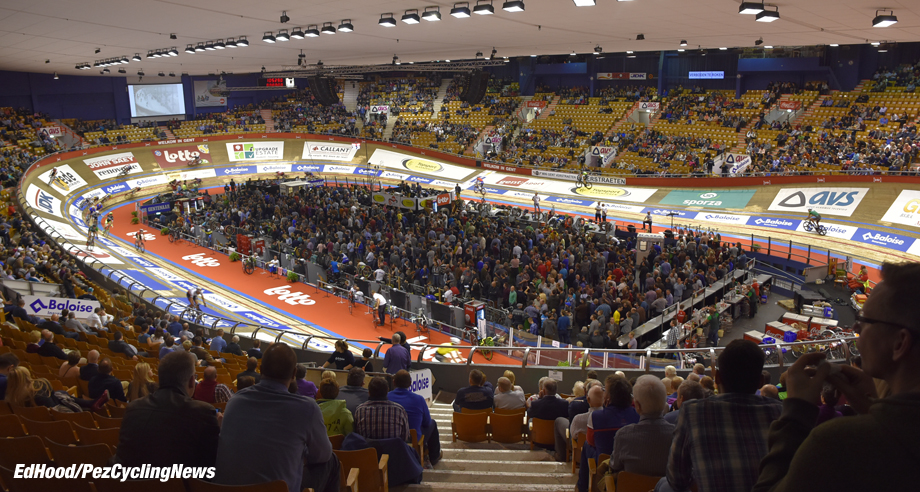 The ambiance is just how you imagined it when you were a boy dreaming of your first visit to a six day. 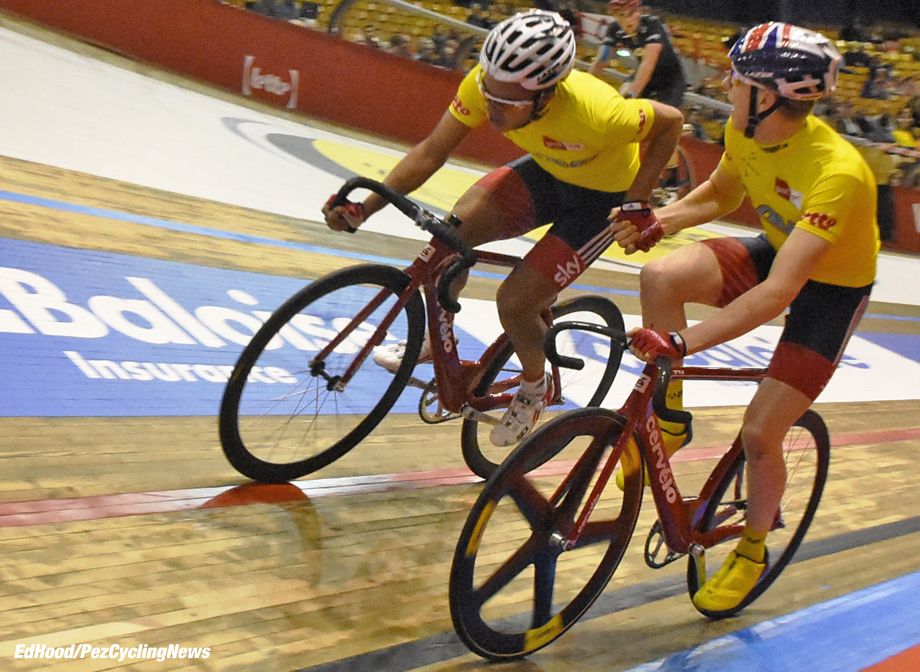 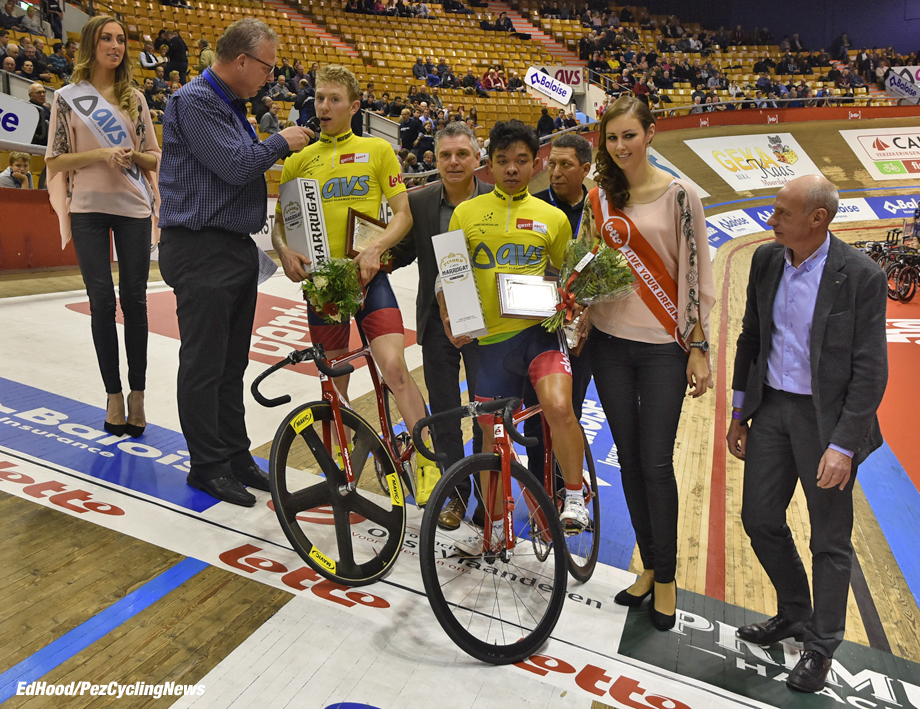 The first race was the finale of the U23 six day, won in fine style by Scotsman, Mark Stewart partnered by former six day man – and Gent Six points winner – Maurice Burton’s son, Germain. Albeit they did bite the dust twice during the session but ran out as dominant overall winners, also taking the points jerseys to emphasize their superiority. 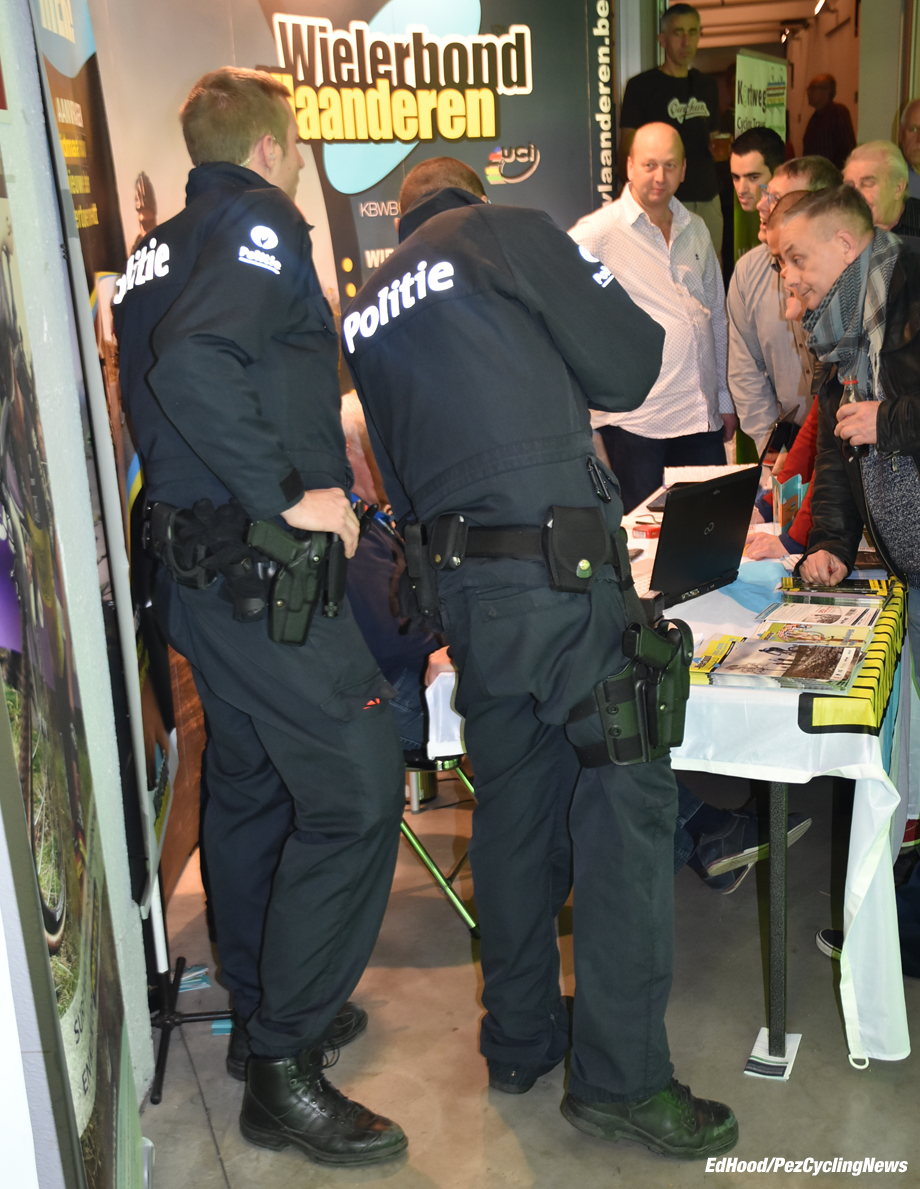 And whilst security was tight it wasn’t so tight that the cops didn’t have time to watch Sven win his second ‘cross of the weekend – the Koksijde World Cup, his 50th win in the competition and 39th Saturday/Sunday ‘double’ – on one of the Belgian Federation officials laptops. 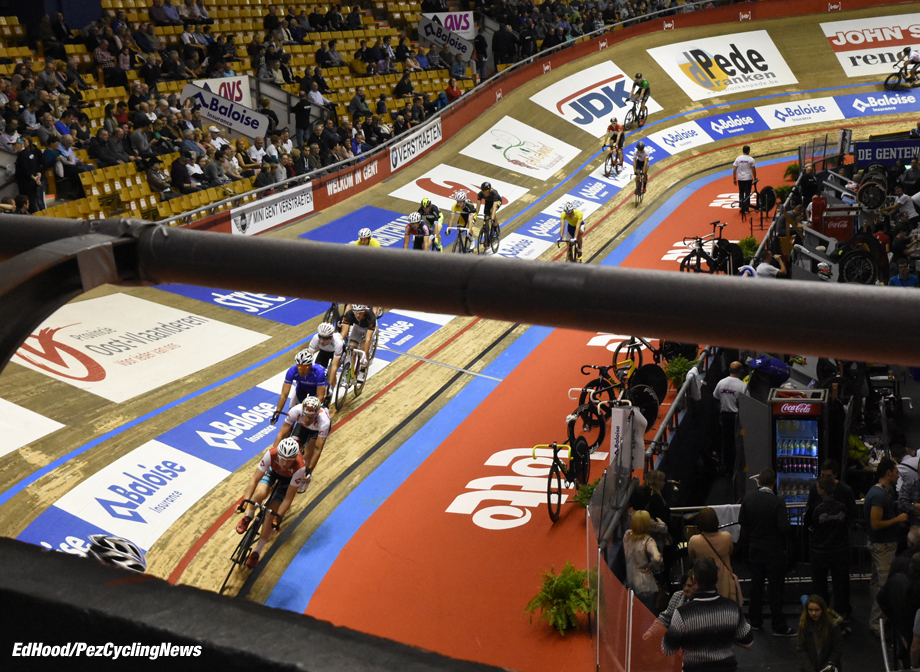 Kenny De Ketele got the better of Iljo in the Derny; a sure sign that he wasn’t destined for that overall podium top step. You have to give to receive in the world of the ‘squirrels’. 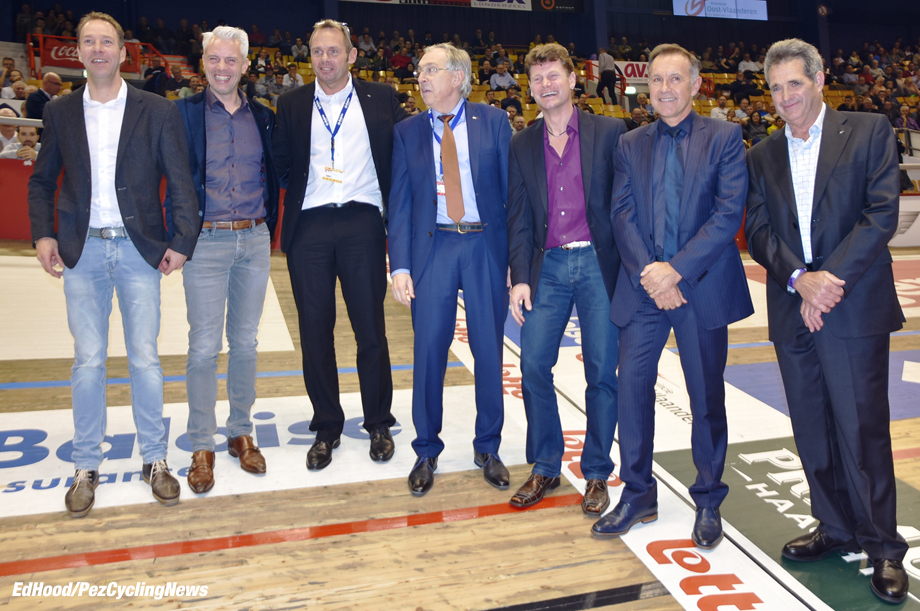 There was a line up of previous winners of the race before the last chase – Stan Tourne, Jimmi Madsen, Bruno Risi, Danny Stam, Bob Slippens and Don Allan were all there. And of course, a certain Patrick Sercu. Despite being a regular visitor to the race, Etienne De Wilde didn’t show, nor did Roger De Vlaeminck, Eddy Merckx, Tony Doyle, Danny Clark. . .

And why not have Iljo, Michael, Alex Rasmussen and Kenny De Ketele up to wave to the crowd too – as well as the ‘oldies’ to give the group more numbers and color? You’d have to ask the organizers. 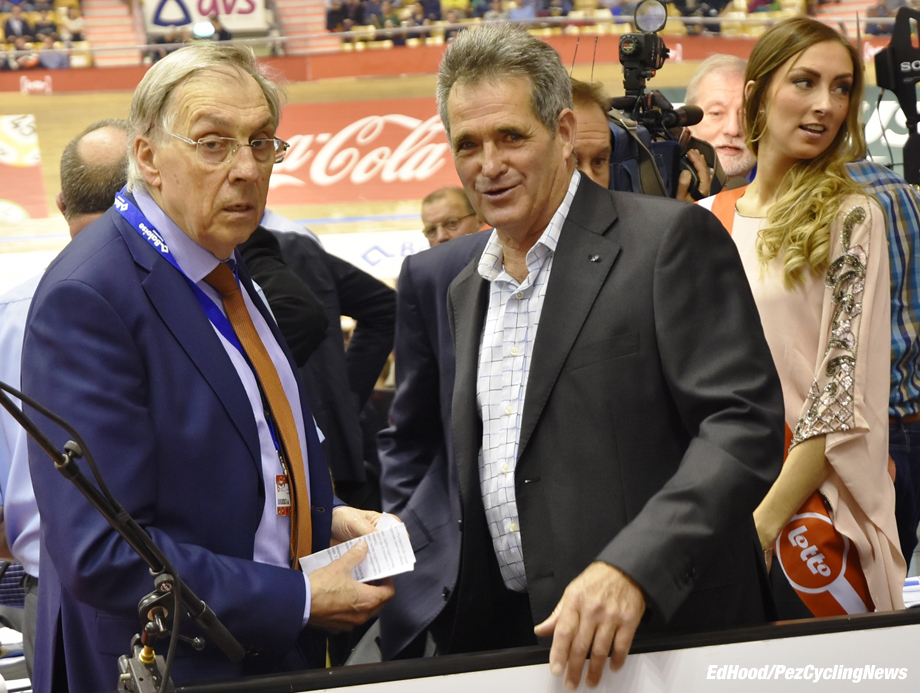 We had a bite to eat with Don Allan after the race and asked if he’d been given a souvenir of the experience? He pointed to a tiny ‘pin’ on his jacket lapel – there’s no expense spared in Gent!

As the last chase whirled into life the soigneurs begin to break camp, the mechanics to pack as much as they could, the final beer and burgers were ‘got in’ and the minnows had the comfort of knowing that it would all be over in 60 minutes. Not a great finalé if you’ve seen a few sixes in your time but the team which won was the best on the track – so no complaints from us. 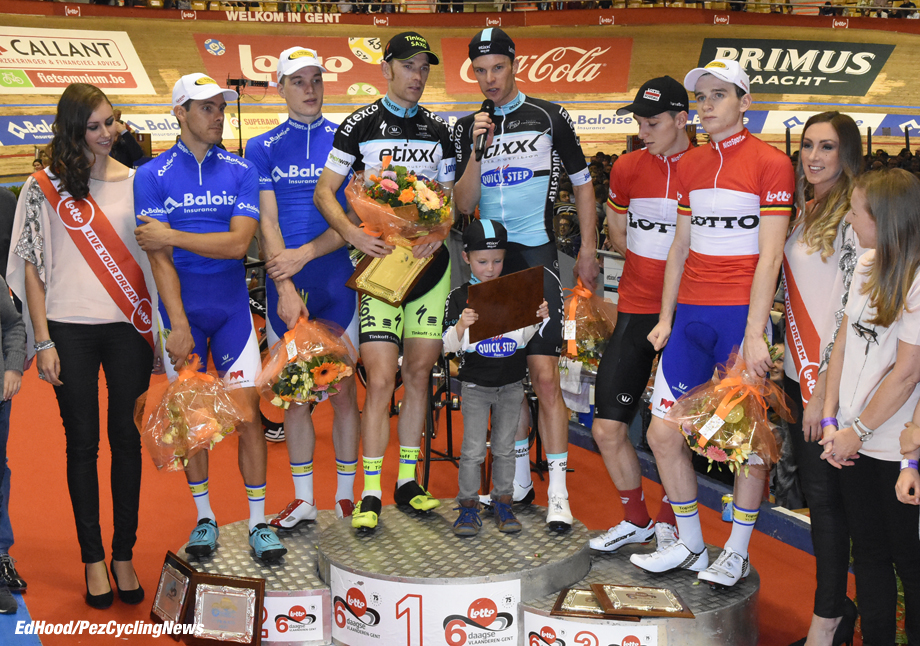 But as I took my last pictures I couldn’t help but remember that last lap in 2009 when Iljo looked to have it won until Alex Rasmussen came round that last banking like a rocket propelled grizzly bear; we hugged and shed tears as our Danes took the win – now that WAS a finale. 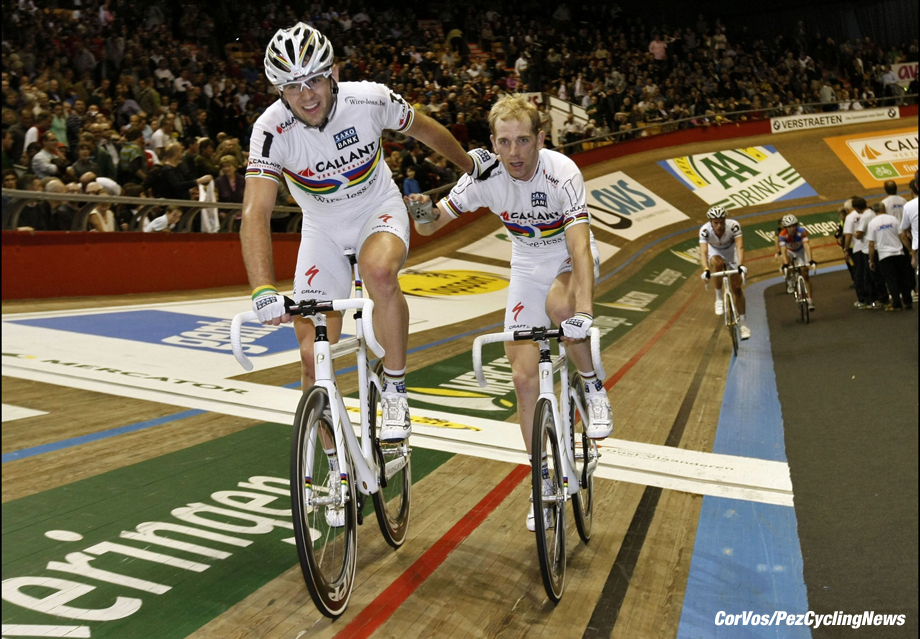