Pez Reports: I’ve been very lucky to have covered racing for Pez in France, Belgium, Holland, Denmark, the UK, Andorra and Spain (for about five minutes) … but never anywhere quite like this. The spectacular and multicolored townscapes and lush mountains of Taiwan. In one of the friendliest societies around, lurks one of the hardest challenges in cycle sport. 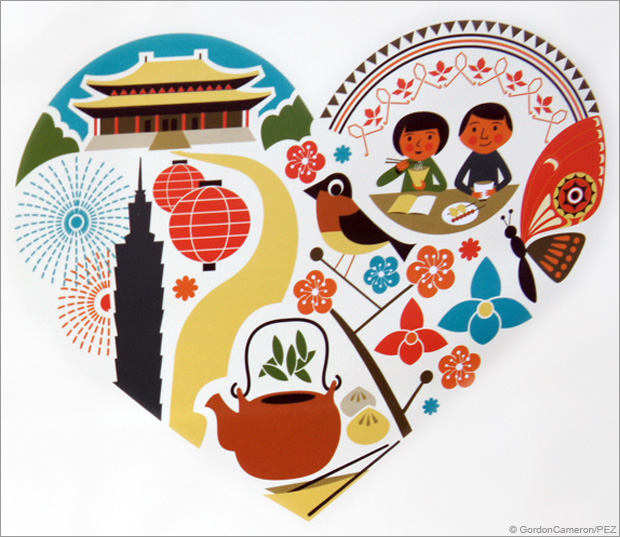 I was sitting in the bus from the airport with Orica-AIS professional Tiffany Cromwell who admitted her adventurous side might have landed her in trouble. Having been off the bike since a top ten at the Worlds, the Aussie said: “I hadn’t really realised what I was getting myself into! I like a challenge, but climbing to 3300 meters above sea-level at this time of year is gonna hurt.” 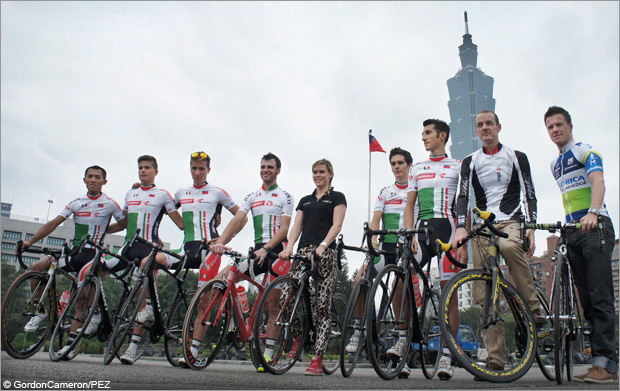 The TCF Taiwan KOM Challenge is an event like no other. Starting on the Pacific shores on the island’s east coast in Hualien, it sends riders up, ever upwards. After a neutral zone of 18 kilometers, the race is on to the summit of Mt Wuling at 3275 meters following 105 kilometers of stunning scenery and intense in-saddle suffering in the Taroko Gorge. 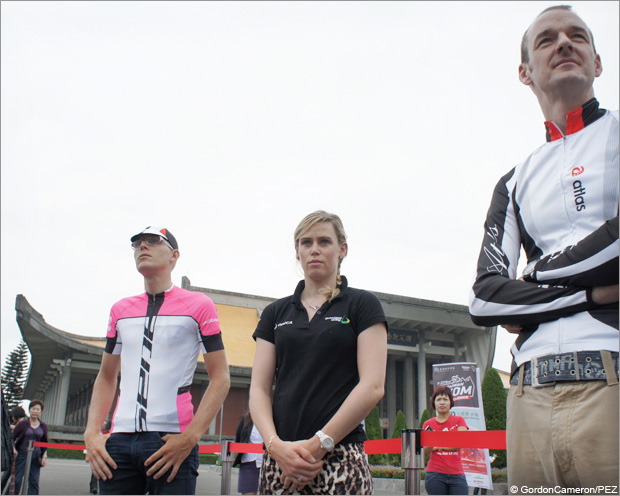 The launch: the athletes await their turn in the spotlight, in front of the Dr Sun Yi Shian Memorial Hall. It’s an impressive building, but in downtown Taipei City, the 101 tower dominates the cityscape; it’s one of the tallest buildings in the world, and is the centerpiece of an incredible New Year’s firework display.

It wasn’t until the drummers and dragon dancers had done their thing that the event was all fired up. Kindergarten classes wander past staring in amazement; very old men in wheelchairs are pushed forward to look through rheumy eyes. Their excitement is internalised as they are turned away and disappear across the square. 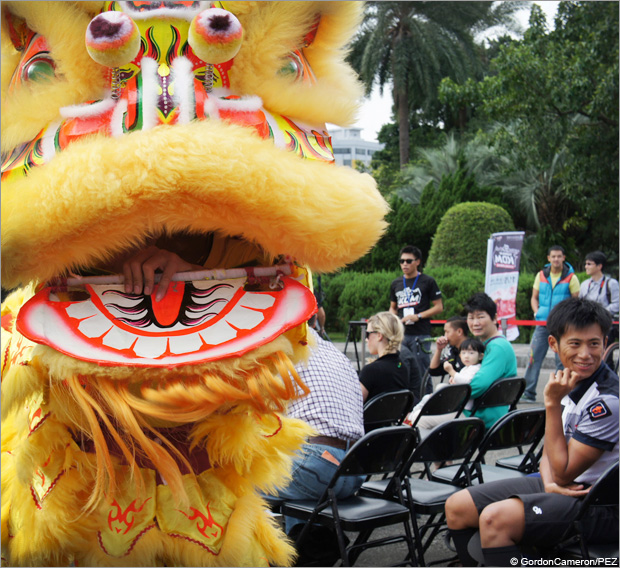 Simon Clarke is the star of the show in the men’s category. The King of the Mountains in the 2012 Vuelta, he’s introduced by another star, Pez’s very own Lee Rodgers, acting as a race consultant. 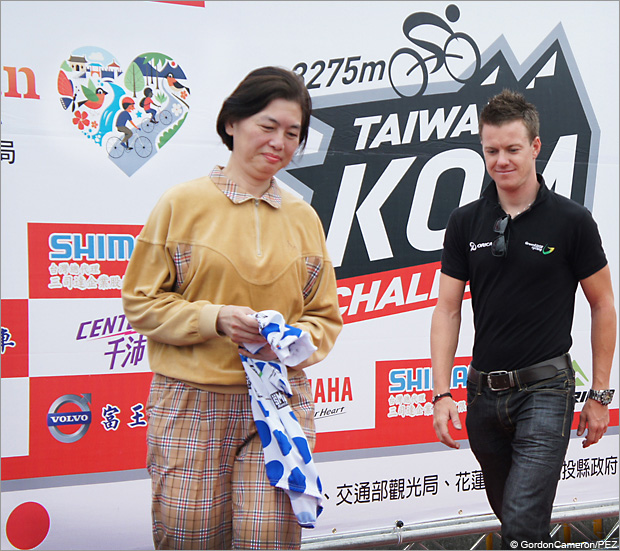 A very happy Chief Secretary of the Taiwan Tourism Board makes off with her Vuelta mountains winner’s jersey, as presented by Simon Clarke.

Clarke made instant friends by firstly greeting everyone before reckoning that having ridden the Stelvio, having gone through the Tour and the Vuelta, having crossed some of Europe’s highest roads, 80 kilometers of climbing would be some new kind of challenge. 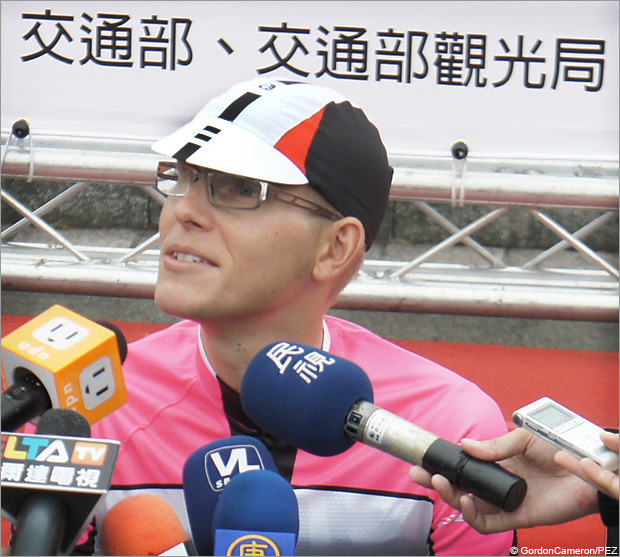 Next up was 2012 Taiwan KOM champion, and professionally skinny Dane, John Ebsen. He blitzed the field last year, storming the course in a little over three-and-a-half hours (!) but an ill-timed cold from a race last week has left him with lower expectations this year. His advice to those riding here for the first time? Succinct, no crap, straight to the point: “It’s a very long race … take it easy!”

Northern Ireland’s David McCann has years of experience of riding in Asia – he won the Tour of Taiwan in 2010 – but was disappointed to find out that Lee wasn’t riding this year, joking that trying to beat Lee was the only reason he’d signed up in the first place. 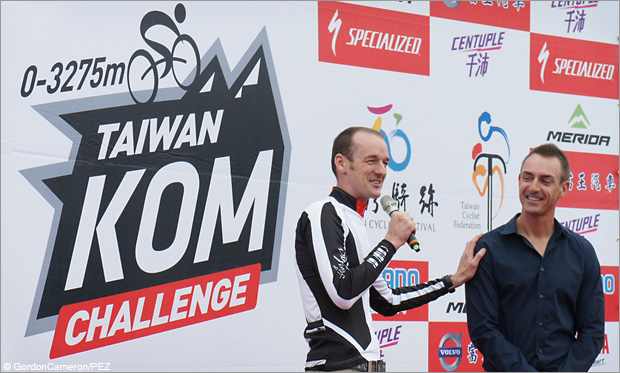 “The Taiwan KOM is really enjoyable and the scenery in Taroko Gorge is hard to beat anywhere in Asia.”

“I was third last year, probably went too hard, too early. You start in the heat, it can be really cold on top. You’ll need the right clothing not to freeze.” 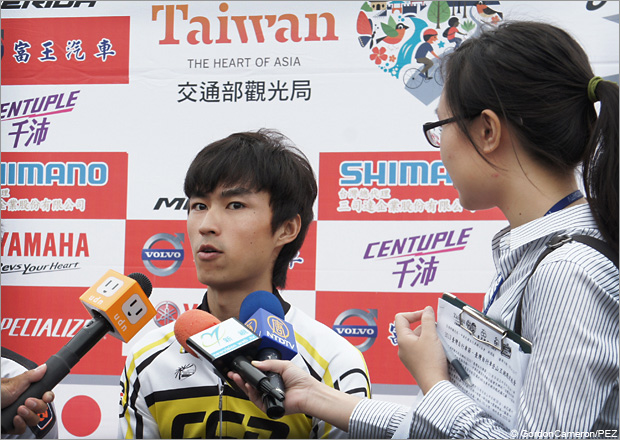 Team CCN’s Wang Yin Chi probably got the biggest reception – he was the top Taiwanese rider at the KOM Challenge last year, and could be battling it out for the win this year. And as my room-mate on my first night in Taiwan, I’m supporting him for the victory!

He’s an ex-team mate of John Ebsen, and when Lee and I asked Yin if he could beat the Dane, he just said: “Yes.” 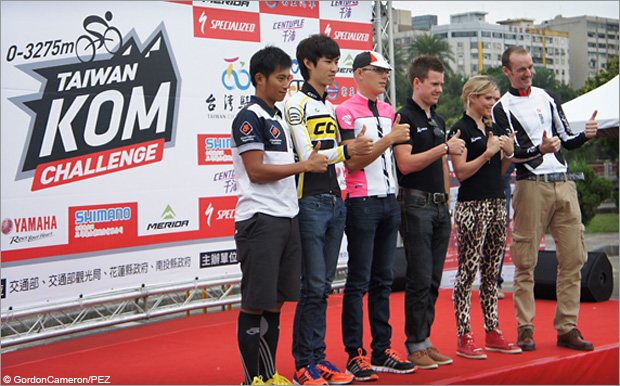 Tiffany Cromwell came up on stage to a very enthusiastic reception: “So far my experiences (in Taiwan) are really good. The people are very friendly and welcoming and I’m looking forward to seeing the countryside when we get to the mountain.” 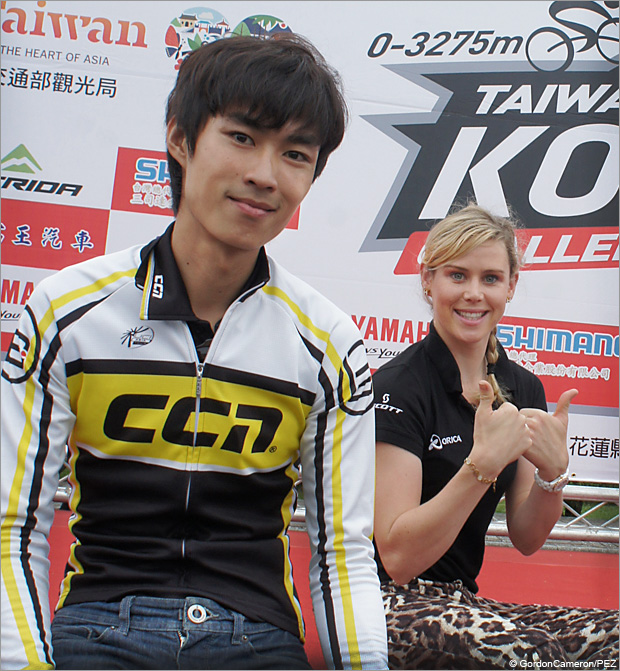 “I came here to take on the KOM Challenge because I like to do crazy things sometimes – and for sure this is crazy! It sounds like an amazing mountain and I’m really looking forward to the climb.”

The Aussie’s biggest rival in the women’s event will probably be the young Japanese phenomenon Eri Yonaming. She’s only 22, she’s been racing for about two years, and is already Japanese road champion, ITT champion and XC MTB title holder! 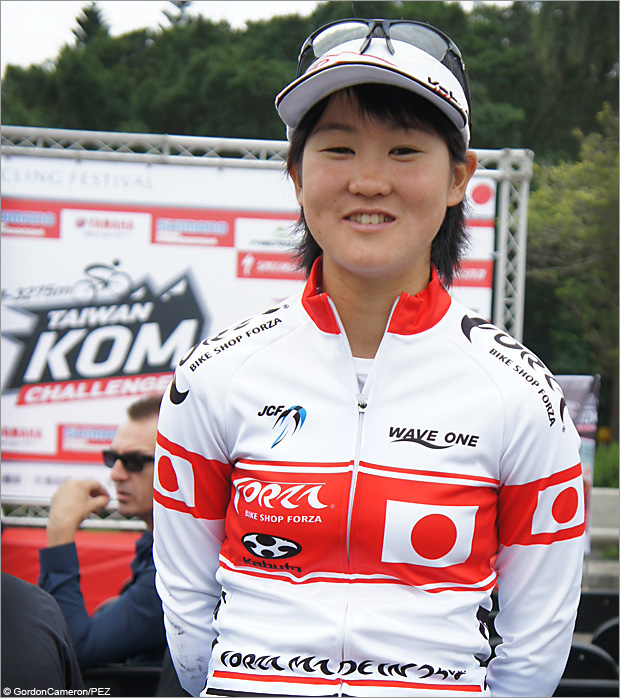 After the conference, it was into the bus and off to Hualien City. It’s about three-and-a-half hours driving with some cool stops along the way.

We pull off the super highway and onto an incredibly serpentine coastal road which dips through tunnels and clings to the hillsides before the stunning blue of the Pacific appears. The Cingshui Cliffs, running between Heping and Chongde are one of Taiwan’s Eight Wonders, setting off the crystal sea. 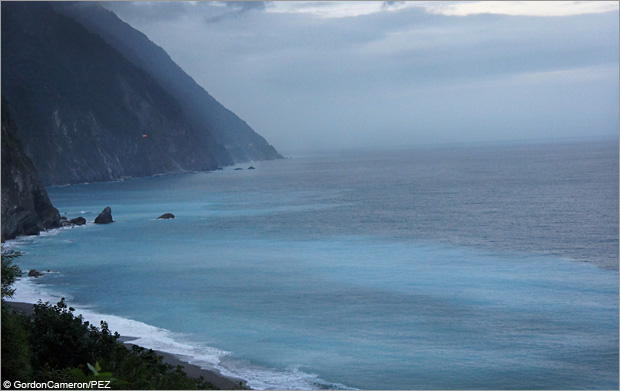 Pez will be roadside, for the first time in Asia, on Saturday when the flag drops for the Taiwan Cyclist Federation’s 2013 Taiwan KOM Challenge. Don’t touch that dial!

Leigh Howard To Stay With ORICA-GreenEDGE

Cimolai and Richeze: LAMPRE-MERIDA at full speed in 2014 too