OTTOLOCK by OTTO Design Works
We first met the Otto Design Works crew from Portland when they debuted their very good gear tuning app OttoTune. I don’t know what’s in their water bottles, but they’re sprouting inventive genius faster than weeds grow in my lawn, and a one-trick pony they ain’t.

Then they introduced the OTTOLOCK – a lightweight (my 30inch tester weighs 151 grams), super strong, and super portable cinch lock that’s small enough to take on any ride because it fits into a jersey pocket, or straps onto your seatpost or frame with a simple stretchy rubber mount. 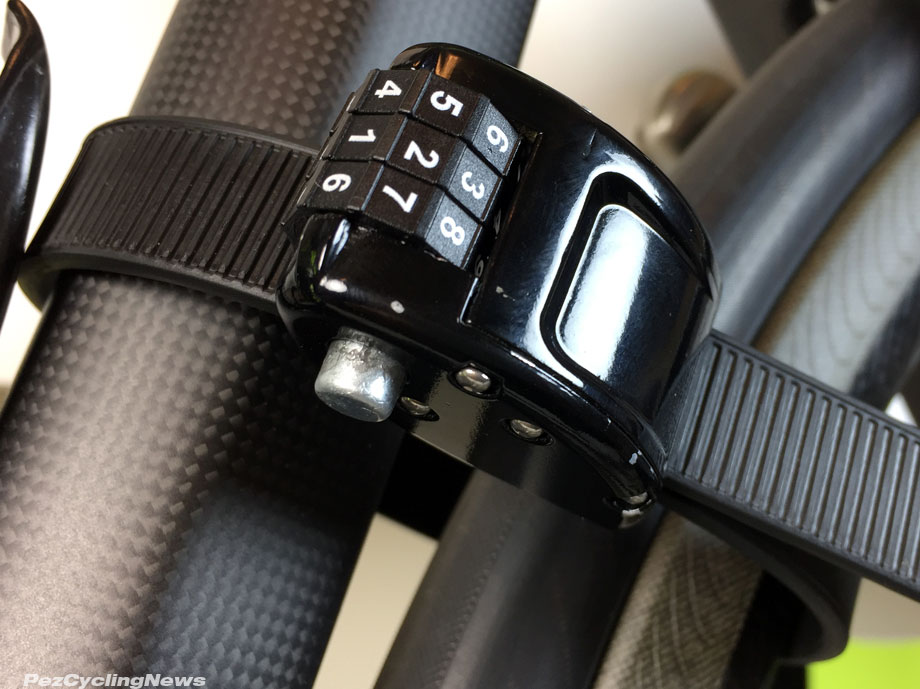 It’s made of several stainless steel bands, and kevlar band, and encased in a tough Santoprene plastic coating. The lock mechanism body is compact and made of “smash proof aluminum”. The lock itself features a 3 x 10 digit combination, and a locking mechanism that clamps down on small ridges  moulded into the strap, that seem impossible to pull apart when the lock is secured. 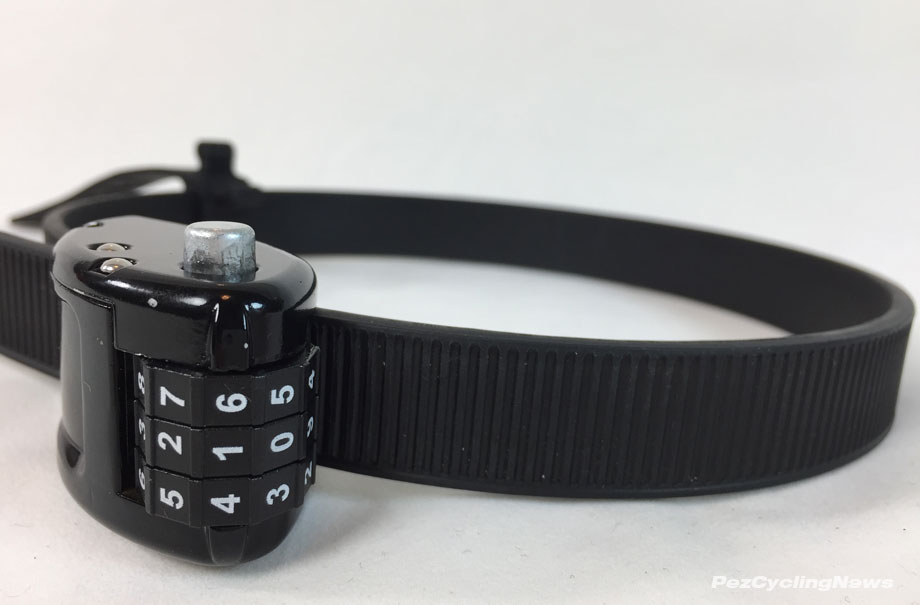 How strong is it? They had a neat test set up where anyone there could take a set of big-ass bolt cutters to it. There were a few indents where folks (including me) had tried and failed to sever the strap- but no one could cut through it.  I tried it from a bunch of different angles, and noticed that the slippery outer casing could not get caught at a right angle in the bolt cutters.  They’ve also done a bunch of cool videos where a series of guys a lot tougher than me attempt – and fail – to cut through the lock. 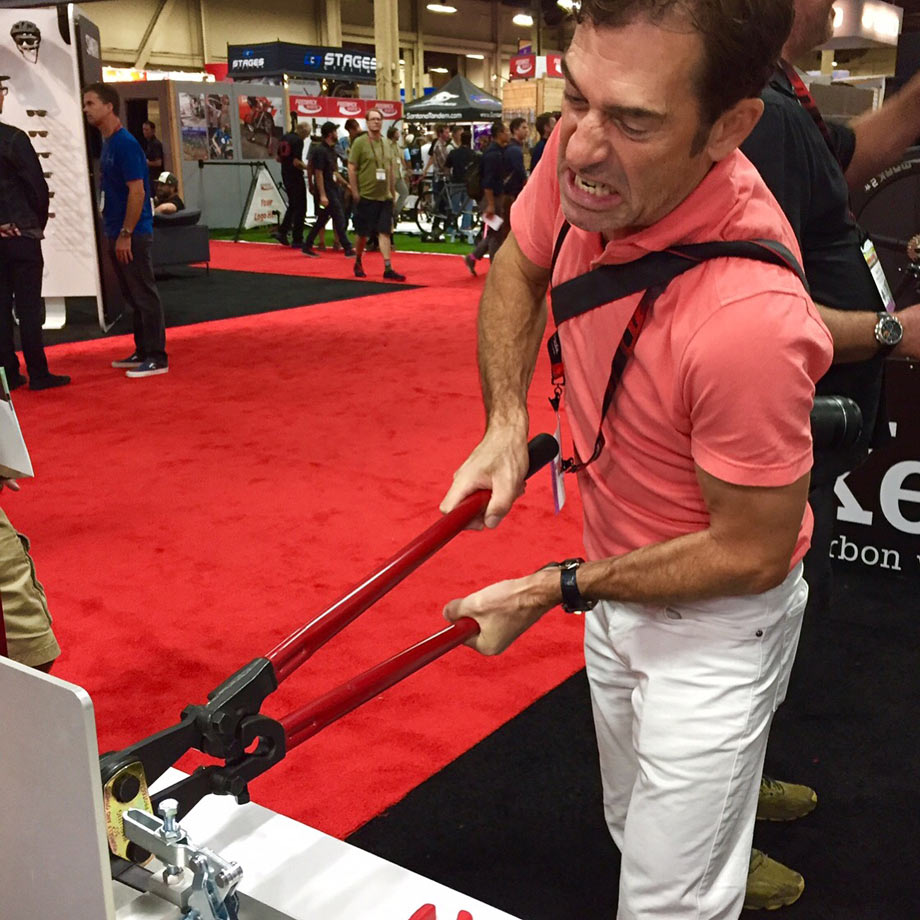 And it’s good for more than just bikes – offered in three sizes (18″, 30″, and 60″), which means you can use it to secure your bikes to a rack, or secure other stuff to anything else.

Maybe the best part is the price tag – $55 up to $75 – completely do-able for anyone wanting to buy some inexpensive insurance for their multi-thousand dollar ride.

After a very successful Kickstarter campaign last year that raised over $250,000, it was clear they had some serious interest. Production in the USA is underway and you can buy em online here. 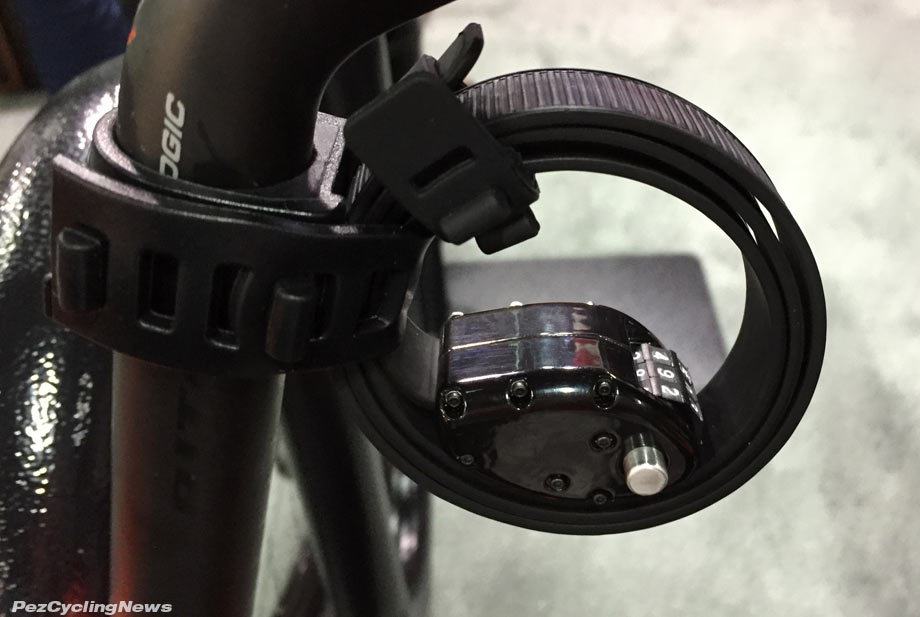