Retro Interview: In ‘Part 2’ of the PEZ exclusive retro interview with US time trial specialist John Frey, he talks us through the World Hour record, coaches and racing against the professionals, plus his love for the tandem and setting new records. 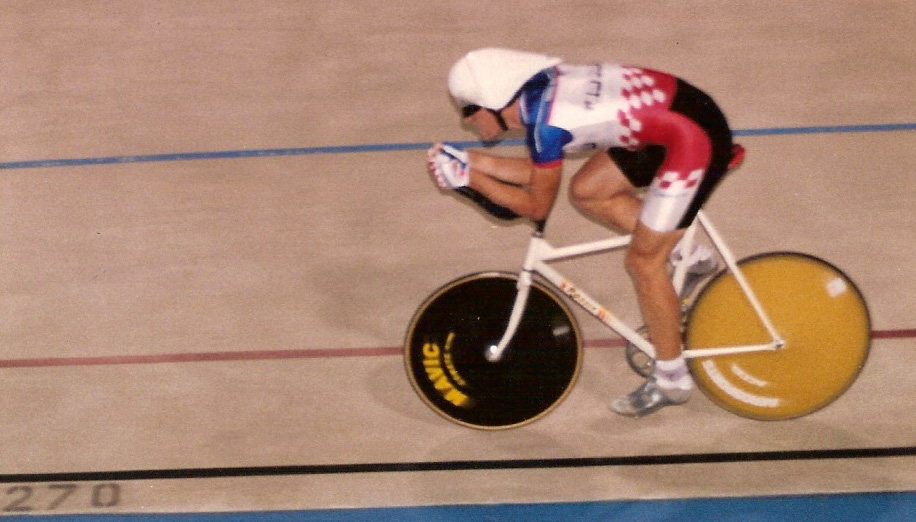 PEZ: The Hour, tell us about your preparation – did you have a coach?
Right off the top, Eddy B. was my only cycling coach ever. His style was old-school East bloc, a mix of hardscrabble and metaphor, his only constant being critique. It worked for me, I’ll always be grateful.
As early as 1986, local supporters Dave Porter and Paul Sery whisked me to the velodrome for a national Hour record of over 46 kilometers. Back to the Colorado Springs velodrome in the Fall of 1987, we pushed it to 47K plus. In Fall 1988, my third year on the national team and having set the national 40K record again in September, we knew we were close to Hans-Heinrick Orsted’s World amateur mark of 48.2K.

No coaching, no help from the national team, and a shoestring budget resulted in an unofficial world mark of 48.4km – I didn’t own a track bike and this closest velodrome was 400 miles from Albuquerque. 1989 was spent serving Shaklee and national team, culminating with worlds TTT. 1990 was a year with more freedom but little support from either sponsor for an Hour attempt. For 1990 our local chaingang was able to raise $2,000 and lots of volunteer effort. No track coaching, a full road season of 100-plus races, better equipment and data from prior events. With UCI commissars (only three in the US), drug-testing and a UCI permit in place our grassroots effort had grown up. The outcome was the last recognized amateur Hour record. 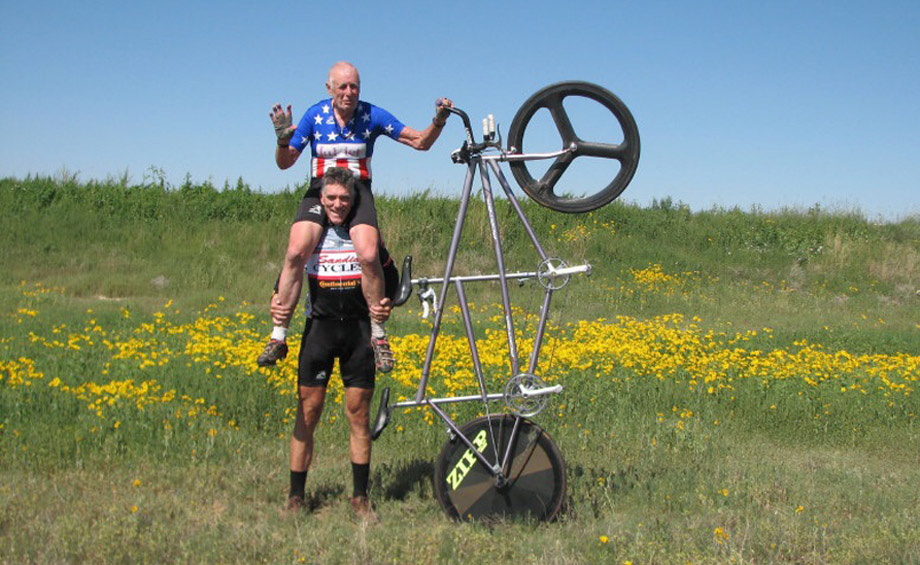 PEZ: Tell us about the track, your support team and did you have much of an audience?
The Colorado 333m concrete track built in 1983 has held up well, world records there date back to 1986. Curiously, Greg Lemond had rented the track for a week of Hour record testing just before our late October go, like many pro’s, he had to discover just how difficult the pace was. We had Colorado Springs track icon Fred Cappy, Pino Moroni (who had fabricated the bits for Merckx’s record bike!), UCI commissar Shawn Farrell from Colorado (who volunteered his time) and our usual entourage of a dozen or so volunteers. Shaklee teammate, Kent Bostick was my wingman and in was perhaps his best outing ever; he obliterated Ole Ritter’s 100km world record with a 2:07 the same night. Total audience of about 20, the bulk of our money was spent on drug testing and hiring the second UCI commissar to come from New Jersey.

PEZ: 49.947 – what do you remember most about that day – and was it a disappointment to miss 50K?
There was anxiety about being forced to ride one day earlier than planned, the weather forecast had changed. I had done a four hour ride the day prior. Our schedule was for 51K; at 30 minutes I was on a 51.5K pace. Time decay set in from there and I certainly could have gone over 50 K with a more conservative start, not having drained myself the day before and using aero helmet and tubing. Can’t say it was a disappointment since it was the best we had gone, UCI recognized the mark as official, we topped 31mph and we knew we had more improvement possible. 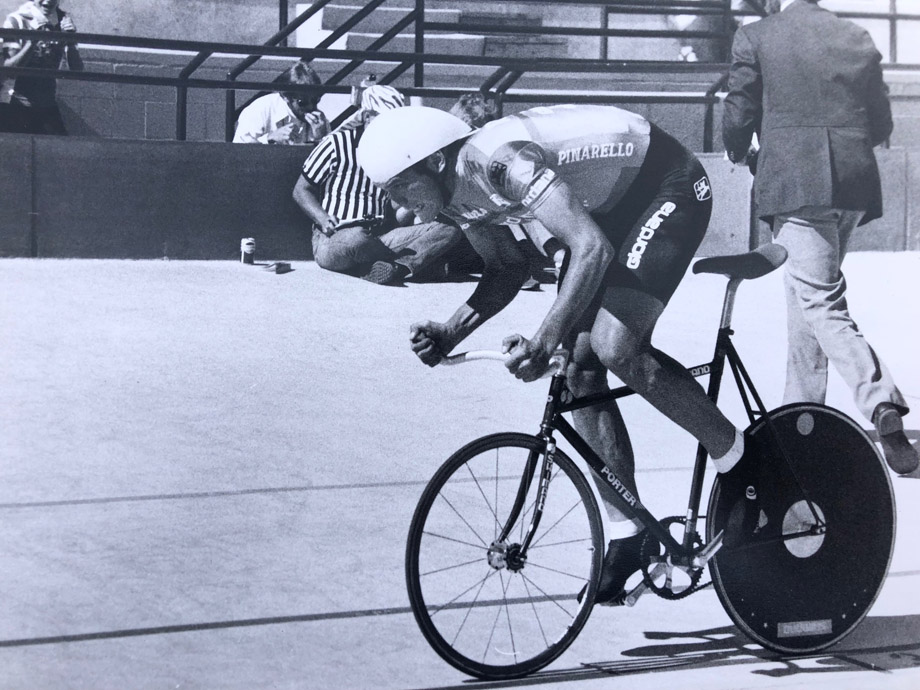 PEZ: Do you feel you got the proper credit for that ride?
Yes, in certain track cycling circles, being noted in the official UCI publication “Lemond” and in Mexico where the mystique of Rodriguez, Merckx and Moser live on. No, as far as future help from the national team, sponsorship for faster records and lack of public revelation of how other Hour records were and were not set. For example, Cinelli spending $80,000 on E. Poli’s failed 1986 amateur attempt, the testing forays of Hinault and Fignon, G. Braun’s travels to Boliva, Oersted breaking his hand in a crash while Hour grooming in Mexico, Moser’s 1984 special surface on the track – spec the photos… I love the anecdotes

PEZ: What are your thoughts on Tom Zirbel’s 53K+ US record?
Long overdue, so much has improved in 20 years. First US Hour record set outside the country, can’t blame him for using the world’s fastest track. Well done Tom!

Credit also to Colby Pearce for organization & optimization in his Hour efforts and to Alvis, his record, the culmination of many pro seasons (also national champion TT as junior & senior amateur). I hope Zirbel’s mark spurs new interest from others. Americans have held the world Hour mark several times – mostly 100 years ago. Hour records are now indoor, under “lab rat” conditions and professional, liable to testing bribery. Obree’s outdoor Hour at Herne Hill, London 49km+ on spoke wheels back in the day? Call me a fan!

PEZ: Your ‘Ten Speed Drive’ time – was that a full professional team?
No, we were the top US amateur team that dominated the 1980’s while 7-11 ruled US pro racing. We denied many good amateurs better results via our strong teamwork and good equipment. Tom Eason of TSD imports was a super sponsor, he imported Italian cycling goods to the US and had his own frame label Tommaso – ‘little tom’. A couple of pro riders did join in final years, Chris Huber – fourth in the Worlds five kilometer pro pursuit, Karl Maxon – euro pro domestique. New Mexico riders Todd Gogulski & Bart Bowen became pro after stints on TSDI. 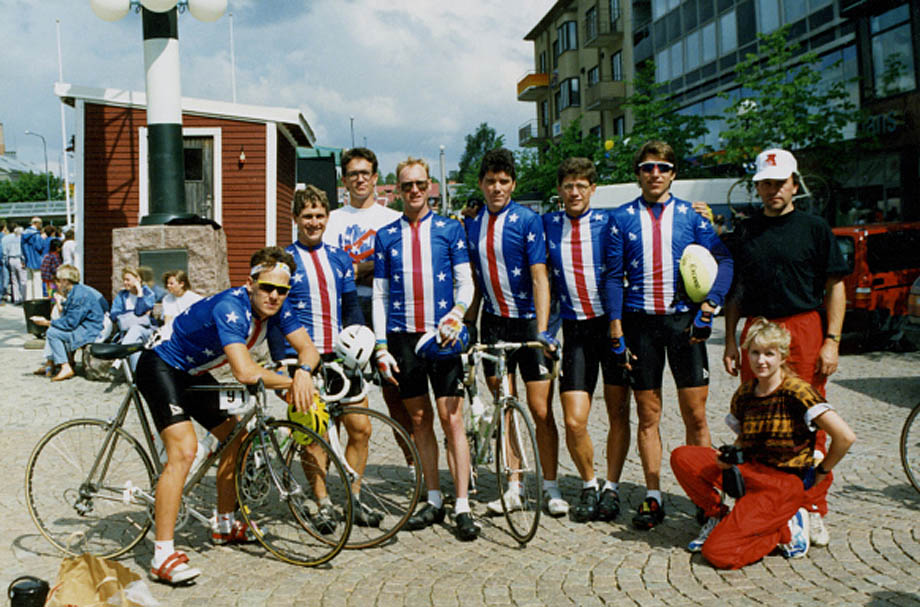 PEZ: The Tour of Sweden ’89 you were second in the TT stage; did you race much in Europe? – would you have liked to?
I did do the Tour of Sweden a couple times and the Post-Giro there also. Great times there and elsewhere in Europe while the national team hardened us for competition. Giro della Regioni, amateur Giro d’Italia, Tour de l’Avenir in Europe. Argentina, Australia, Canada, Guatemala, Japan, Mexico, Morocco also filled my passport.

Sure I would have loved to race pro in Europe, but I was a 28 years-old when first racing top level, and a TT man is a low priority for pro teams.

PEZ: You must think it a pity there was no Worlds TT Champs back then?
Waited for that to happen, better late than never. Really proud of Engelman’s 7th in ’95 Worlds ITT in Columbia. It’s good for the cycling industry and coaching. Would like to see the TTT go back to 4-man 100km, a lot more strategy/drama. 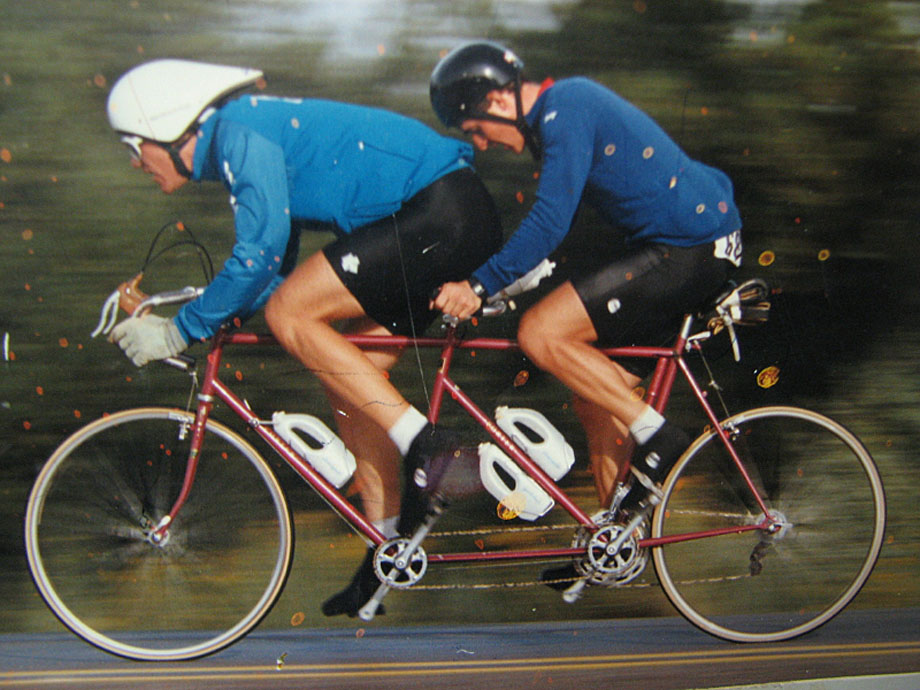 PEZ: Tell us about your tandem records.
Used to do local century tours on tandem just for the speed factor. I bought a used ’83 Santana, but my wife never took to it. A Shaklee teammate, Rod Bush, and I pushed the national Open tandem 40K record back three times to 44:18. After the 40K individual record, I set a masters 70+ tandem record on a lark and that started my focus on long bikes. I took four national Open tandem TT titles in a row, with four different stokers, the last in 1996. The US masters tandem 40K records are recognized in Open, 70+, 90+, 110+ and 130+ yrs, have held all those records at one point but have had the 70+, 90+ superceded. It’s fun to go the speed of my younger days, help the group rides and get more out of the new aero swag.
Brits still got that unofficial tandem Hour record? Hmm… 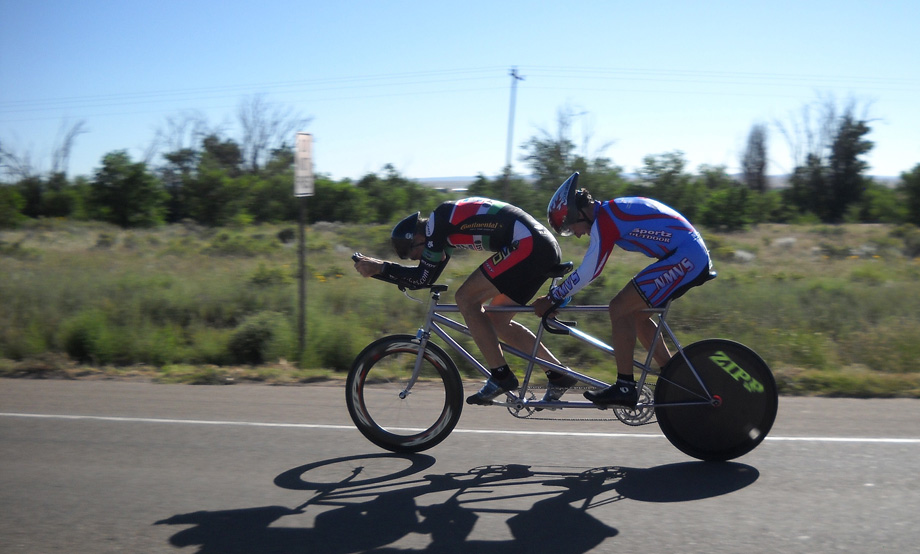 PEZ: What do you do now?
Nearing empty nest with 21 year-old son, Conor, (basketball) in college. And 18 year-old daughter, Carol, (equestrian). I trained as a Registered Nurse after cycling and have worked in coronary care, hospital setting, for nearly 20 years. Continue crazy for the bike, but enjoy anything outdoors in New Mexico altitude with my wife, Kelly, who is still on my wheel after plenty of rough road and bad weather! Advocate for cycling and health prevention to anyone, whenever possible.

PEZ: Looking back – what would you do differently?
Tough question. Start racing top level sooner, market myself aggressively and utilize my friends more.
Taken better care of my diet; seek coaches/specialists; race more selfishly – less working for teammates. Give better THANKS TO EVERYONE who made my racing possible – so much housing, travel and entry fees – as cycling remains a bourgeois sport in the US.

Glad I held on to the amateur ideal, beating the pros always felt great. 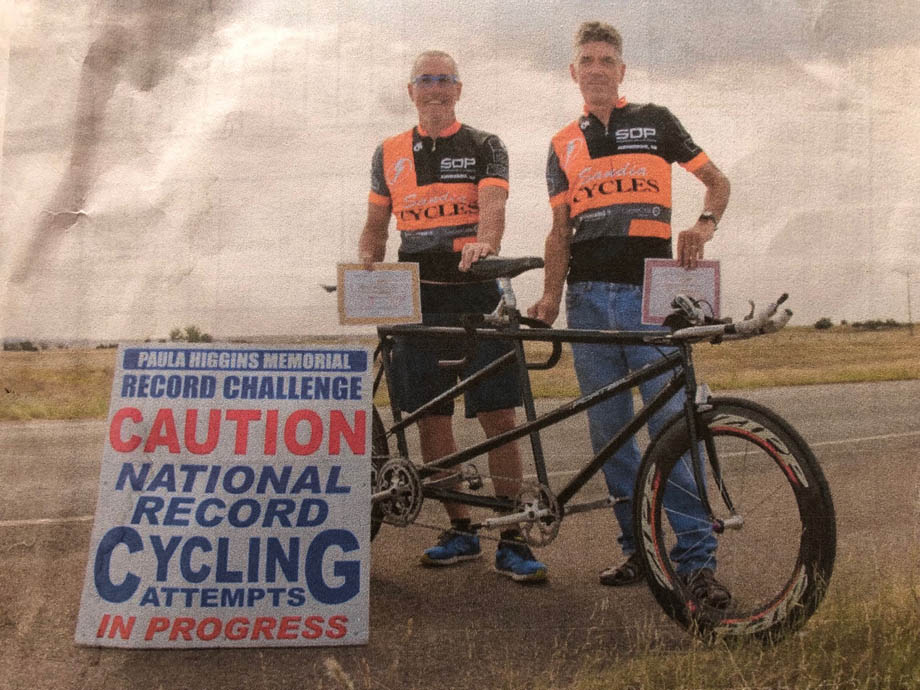 Most photos supplied by John, others unknown. 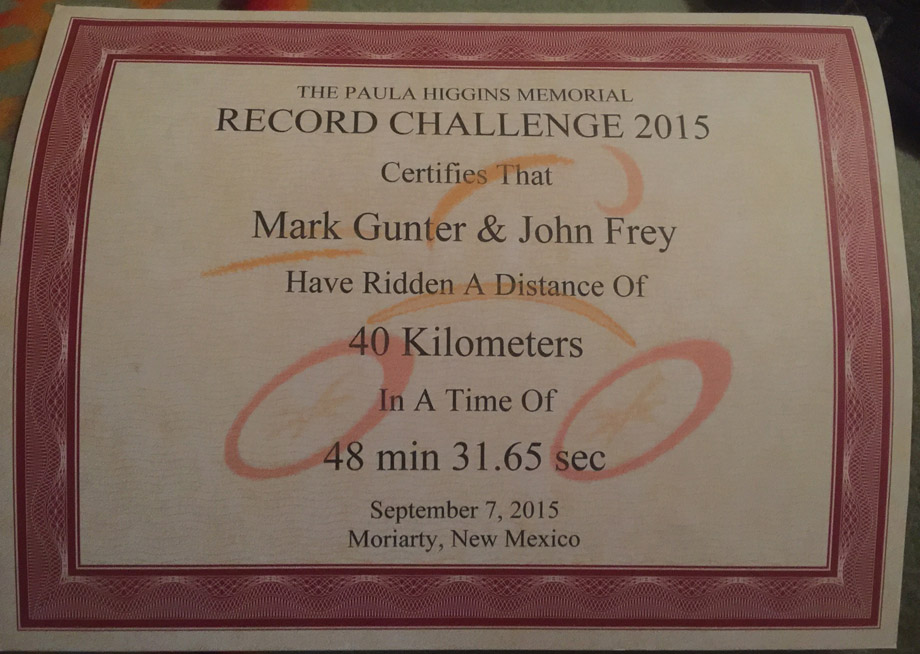