Roadside Giro ‘Top Twelve’: Ed Hood is back to the ‘day job’ but he still has the pink mist of the Giro d’Italia running through his head and has picked his ‘Top Twelve’ high points of the Italian Grand Tour from a roadside point of view. The Tour de France is for everyone, but the Giro is the Grand Tour for the cognoscente and Ed is a connoisseur of all things Giro.

That was the time our alarms jolted us back to life on Monday morning in our Torino hotel to catch our flights back to bad weather, hit or miss coffee, very little pink and no Gazzetta.

As the Twingo scurries us towards Malpensa, Milano’s main airport we think about our Giro Top 12 for 2016. 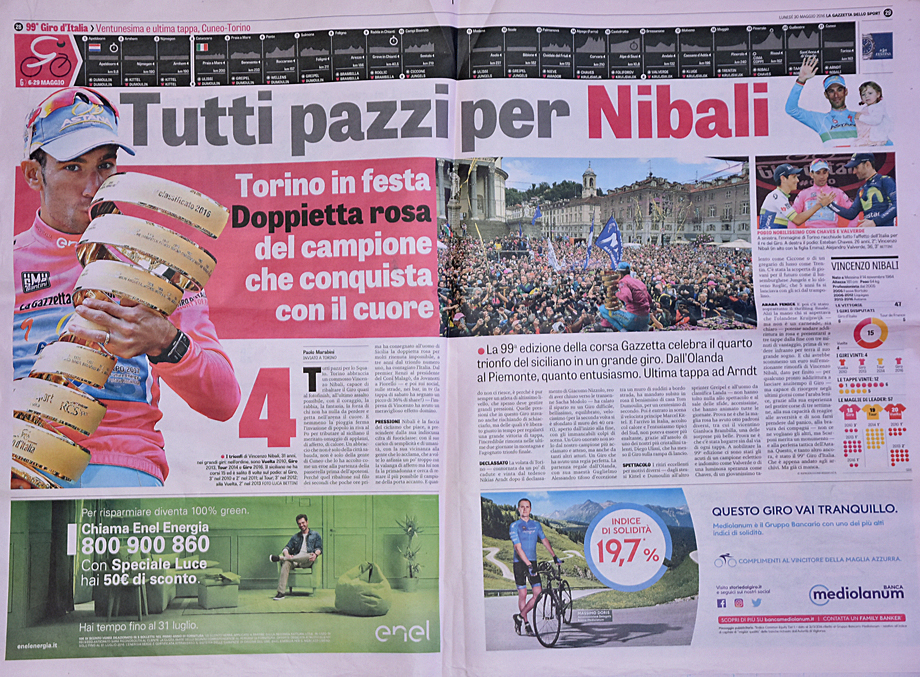 I know, we mention it every year but no day on the Giro is complete without the Gazzetta on the dashboard.

It is just SO Italian, take yesterday’s stage, Nizzolo was declassed for coming off his line – a bad decision if you ask us – and the stage awarded to Germany’s Arndt (Giant-Alpecin) who’s only image in the paper is in the far distance behind a triumphant Nizzolo who has his arms in the air.

Kruijswijk’s crash got little attention but he does get an 8.5/10 in the pink paper’s final summing up, the same as Chaves. Nibali is on 9.5, Valverde on 8 with white jersey Jungels and double stage winner Ulissi; stage winner and pink jersey wearer Brambilla gets 7.5; stage winners Ciccone and Roglic 7. Landa gets 4.5 for his early disappearance; ‘virus or too much pressure?’ enquires the Gazzetta.

And Greipel is on 4 for retiring in rossa and disrespecting the jersey.

They don’t hold back. 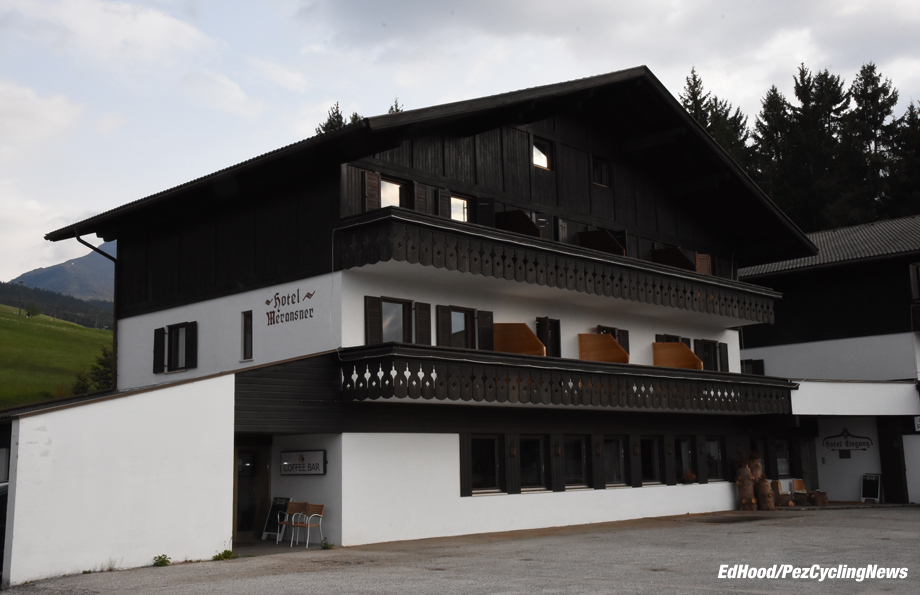 We’ve stayed in them all in our time from chateaux to sheds and this year wasn’t bad at all, if we had to pick one out it would be the Hotel Meransner high in the mountains above Bresanone.

We spent our first two nights there and despite the fact that we were the only residents and there was a touch of, ‘The Shining’ about it and then on the second night we had to sleep fully clothed because of the cold, we liked it. It was clean, everything worked and our host couldn’t have been friendlier – and the grub was fab. 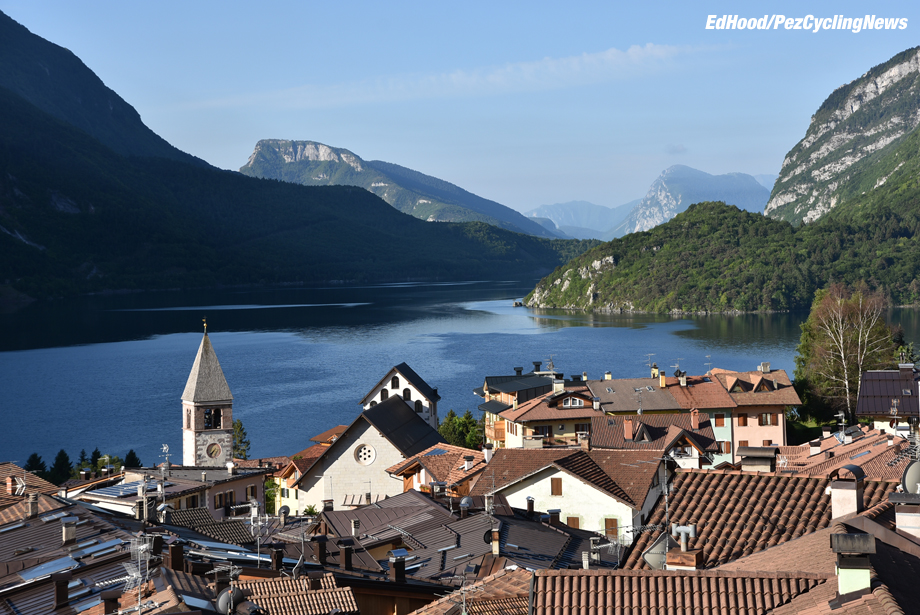 We loved Molveno, snuggled under the mountains beside Lago di Molveno with wonderful views, nice restaurants, little streets and a park for the sign-on right beside the water.

We could live there – we loved the lakeside road in particular. 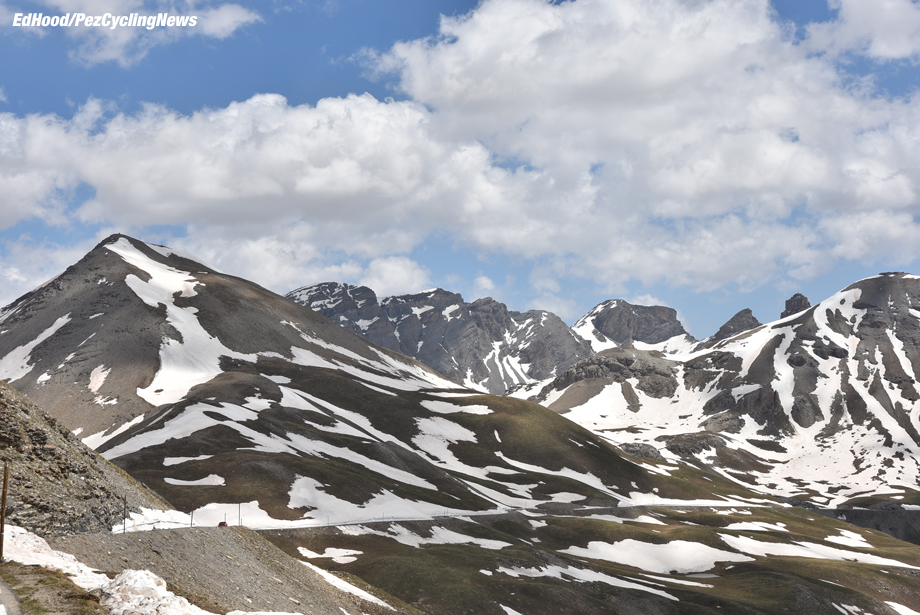 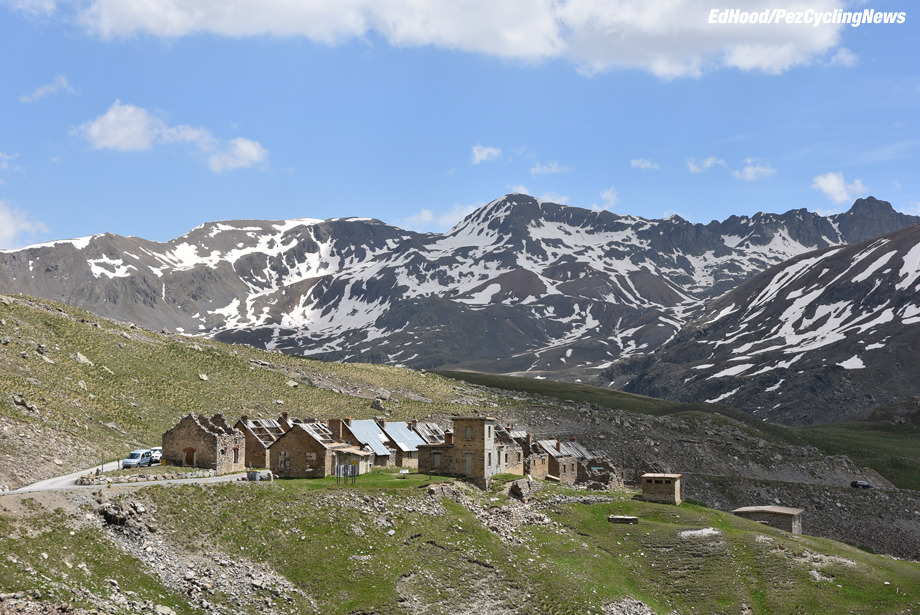 Perhaps the views of the Agnello, another 2,700 metre monster may have been better but we can’t say, we couldn’t see our hands in front of our face up there, due to low cloud.

So for sheer breath taking grandeur it has to be the Col de la Bonette – around every corner there was a vista or rock formation which had you saying; ‘wow! look at that.’

At the top you could be in the Andes or Himalayas – stunning. 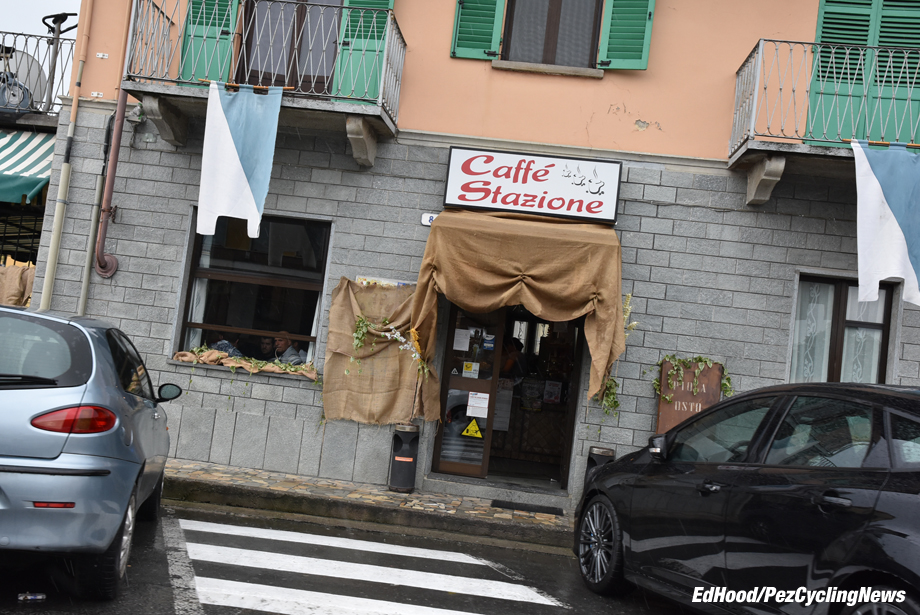 Grappa is an acquired taste.

It’s a brandy made from grape pulp, skins and all. The quality ones are made from the best grapes and the juice sold back to wine producers. The cheaper versions see the manufacturer buy the pulp from wine producers and distil it.

We can’t go crazy with alcohol when we’re on the Giro, we’re up early every morning to work but we do like our grappa nightcap. We thought we’d tasted strong grappas ’til we ran into a ‘clear’ (you get yellow, too) grappa in the Cafe Stazione in Revello; we’d never actually sampled dragster fuel – until now . . . 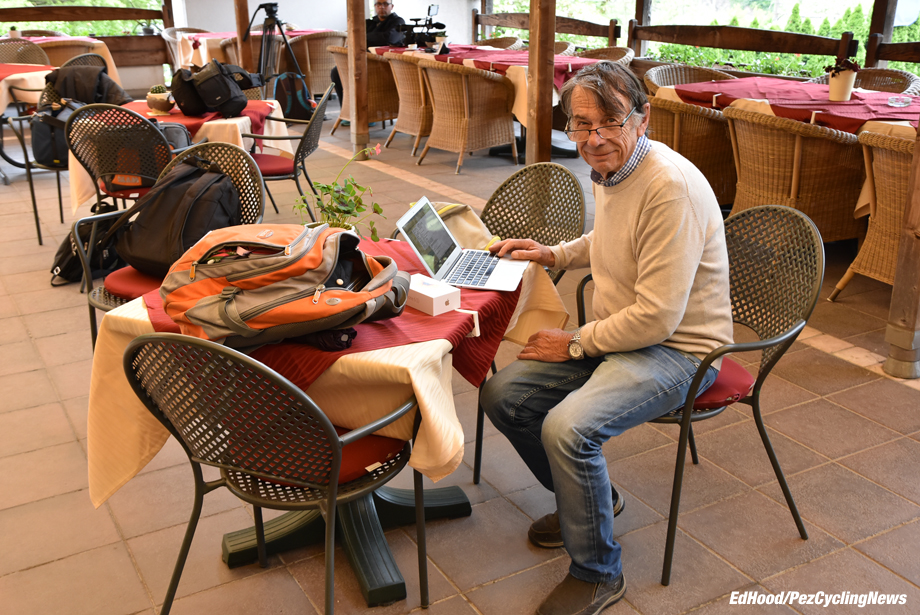 Despite the fact that this is our tenth Giro gig, a helping hand is still more than welcome.

Orica-GreenEDGE’s John Trevorrow (‘Iffy’ to his chums) is a legend in Aussie cycling, you can read his story in the PEZ interviews, *PART 1 & PART 2* but we’d just like to thank him for his good humour, help and insights into all things GreenEDGE and Giro. 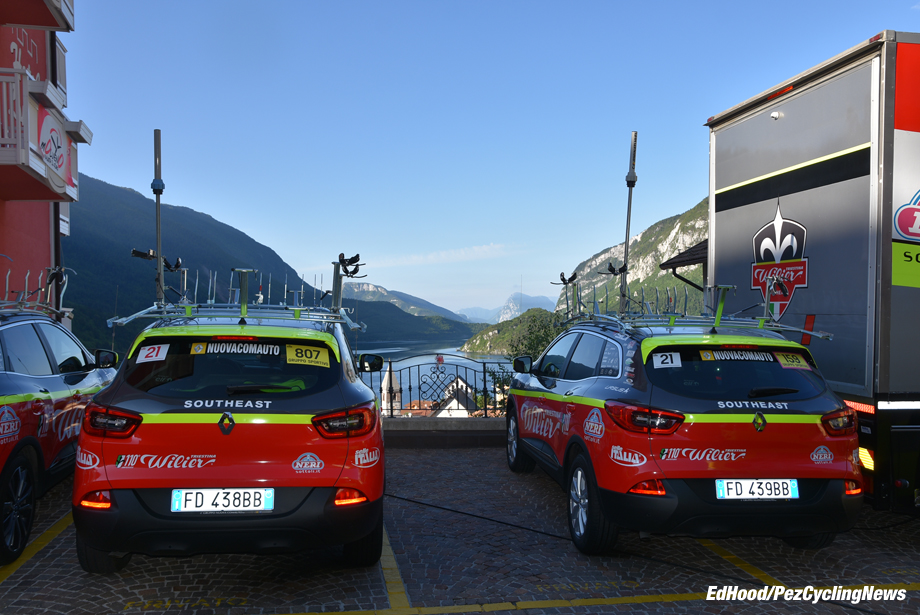 There are all manner on the race from Giant’s cool black Minis to Sky’s big black funeral car Fords.

But we liked the Southeast team’s SUVs. They perfectly match the team’s brash, colourful image. Especially with colourful ex-pro, big Luca Scinto at the helm. And going back to Sky, do they really need all those motors?

Katusha’s Giro looked like a disaster when their GC man Ilnur Zakarin crashed on the descent of the Agnello on Friday, ending up in hospital with a broken collar bone. But the next day Estonia’s Rein Taaramäe salvaged their race with a brilliant stage win into Sant’Anna Di Vinadio.

On Sunday as the teams packed up to head home we spied the squadra’s ‘Three Wise Men’ of management. In the middle is Tour de France breakaway king and stage winner, Ukrainian Serguei Outschakov. Serguei’s big claim to fame as a rider was that as well as the stages he won in the Tour, Giro and Vuelta, he was declassed in another Tour stage but wouldn’t leave the podium. Eventually Old Serguei had to be escorted off.

On the right is Russia’s Dimitri (Dima) Konyshev, there’s a PEZ interview with him back in the PEZ vaults. A talented pro with Worlds medals to his credit he wasn’t renowned for his work ethic when it came to training but when his contract was on the line he could always pull a ‘big one’ out of the hat. He’s still laid back and approachable but there’s little you can tell that man about professional bike racing.

Finally, on the left, the legendary ‘Eki’ – Russia’s Viatcheslev Ekimov; a world champion and world record holder as an amateur and world pro pursuit champion. His career spanned the decades and he served under Peter Post and Johan Bruyneel. If you’re a young pro there’s not much mileage in trying to ‘blag’ those guys. 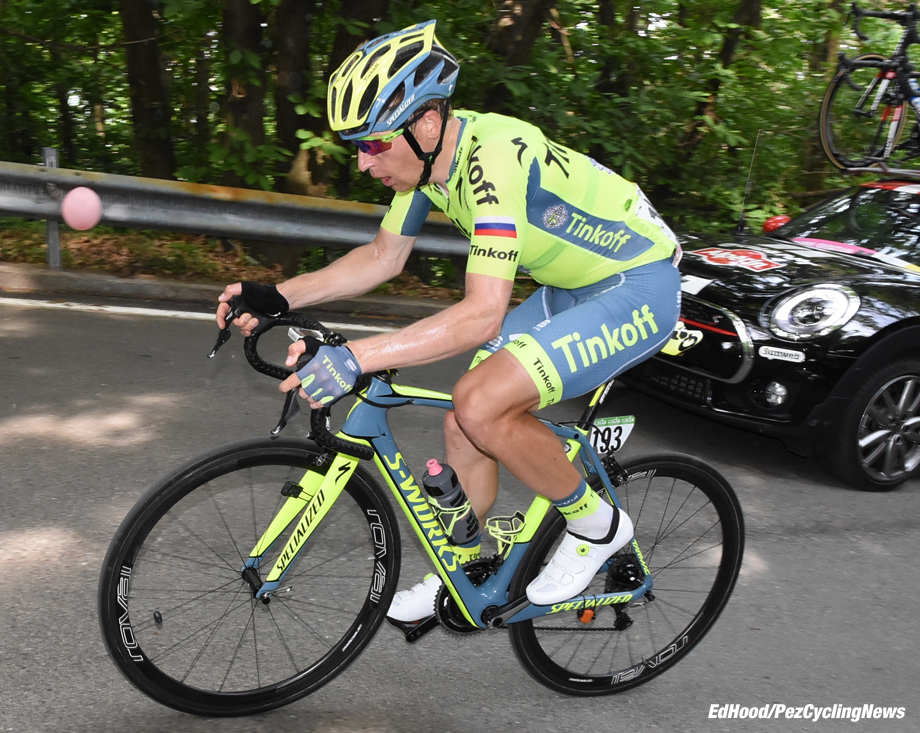 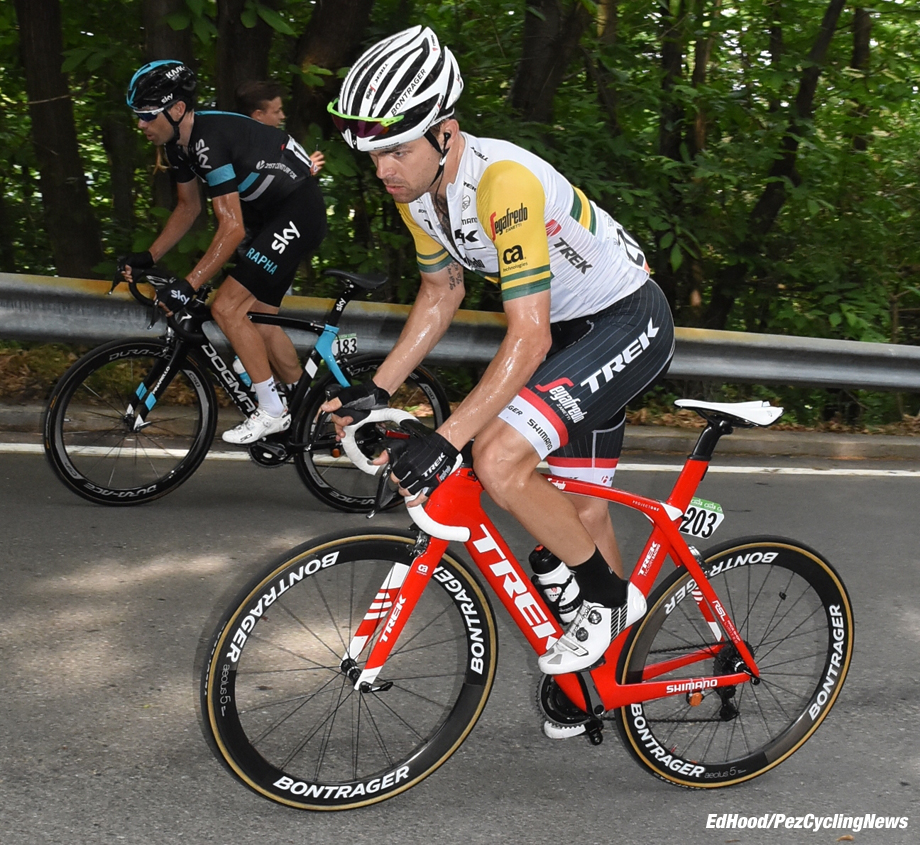 As with cars, wind tunnels across the world tell the same story. Aero down tubes, massive gusseting around the bracket and seat stays coming into the seat tube low, out of the wind are all now the norm.

So it’s paint jobs which perhaps now make the biggest difference to the ‘bike watchers’ like us.

Tinkoff’s grey and fluo yellow Specializeds aren’t to everyone’s taste but we like them – an unusual colour combination but it works.

Treks used to be ugly things, grey with the seat tube landing at the front of the bottom bracket, creeping on to the top of the down tube giving a big gap between the seat tube and rear tyre. Not now, their latest creations in a striking red with big bold white decals are cutting edge. We’re not convinced on ‘aero’ for bunch racing, not with two big fat bottles and wires and junction boxes out in the wind but Trek’s slippery bar/stem combination and neat brakes certainly look cool. 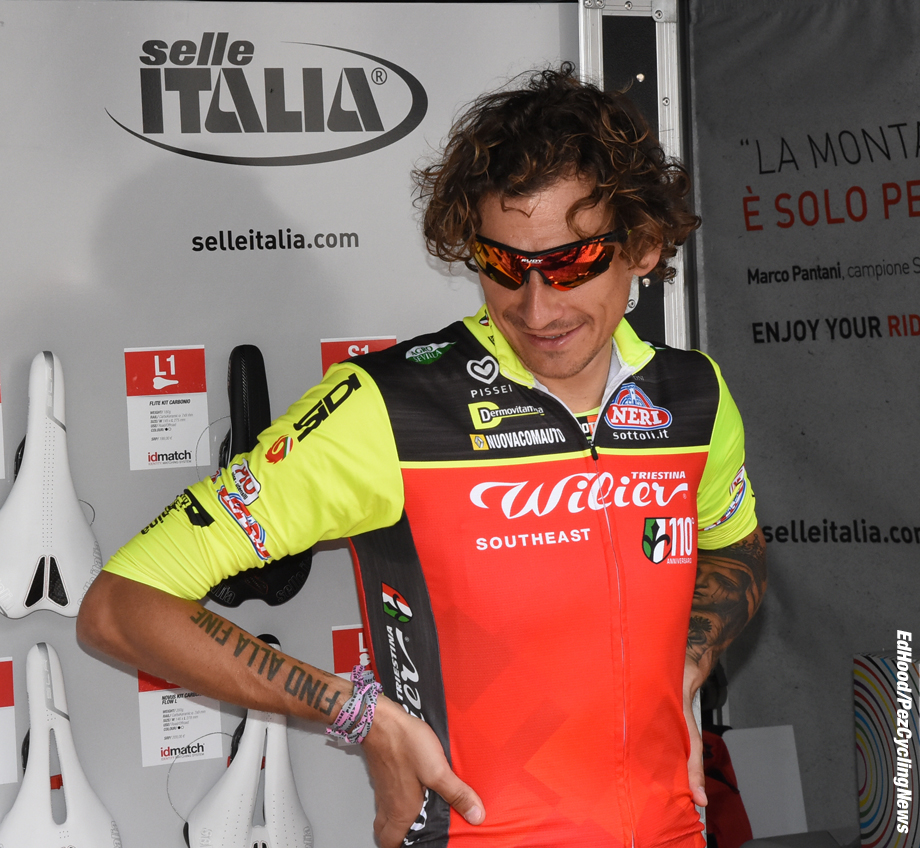 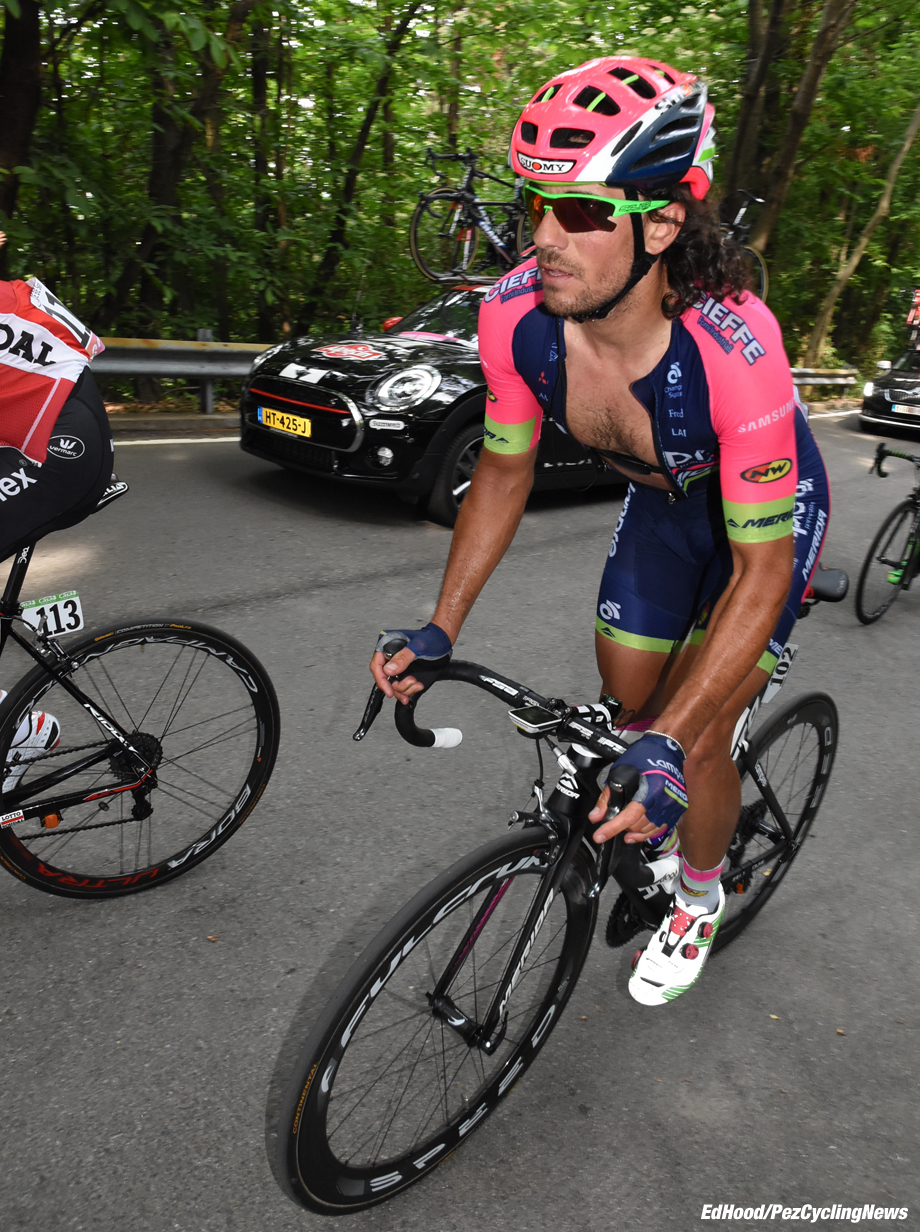 None cooler than ‘Pippo’ Filippo Pozzato (Wilier-Southeast & Italy) such a pity his big bid for glory failed into Cassano D’Adda. He’s past his sell by but is still loved by fans and respected by his peers – he’s ‘the man’ in the Gruppetto. The hair, the smile, the attitude, the tats, the position – he’s the real thing.

We have a soft spot too for Ferrari (Lampre-Merida & Italy) he’s won a Giro stage in the past but is now Sasha Modolo’s lead out man – he’s got ‘the look’ too. 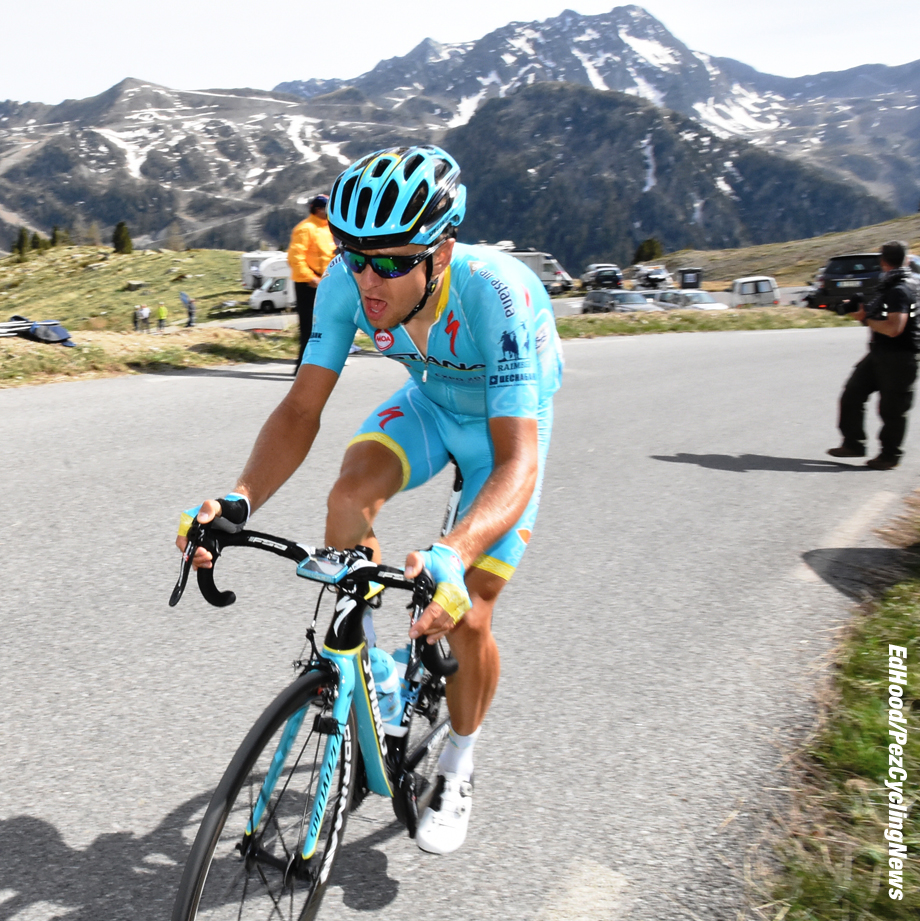 It has to be Stage 20, we drove the whole percorso and embedded inside the last kilometre of the final Col, the Lombarda.

The action unfolded in front of our very eyes: Taaramäe saving Katusha’s Tour, the desperation in the eyes of Atapuma and Dombrowski as the dream of a stage win slips away. Kangert riding himself to a standstill to get the gap for Nibali – then the man himself, riding to realise what had seemed impossible just a few days before. Chaves struggling to hold on to Urán and realising that his ‘pink dream’ was fading fast. And a whole host of tired men just battling to finish – the gruppo was at 45 minutes, this day. 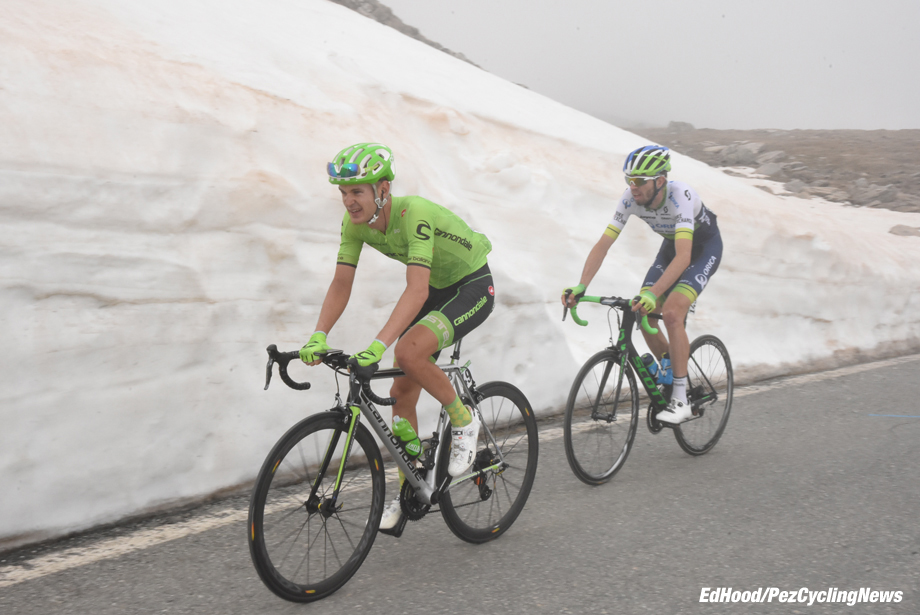 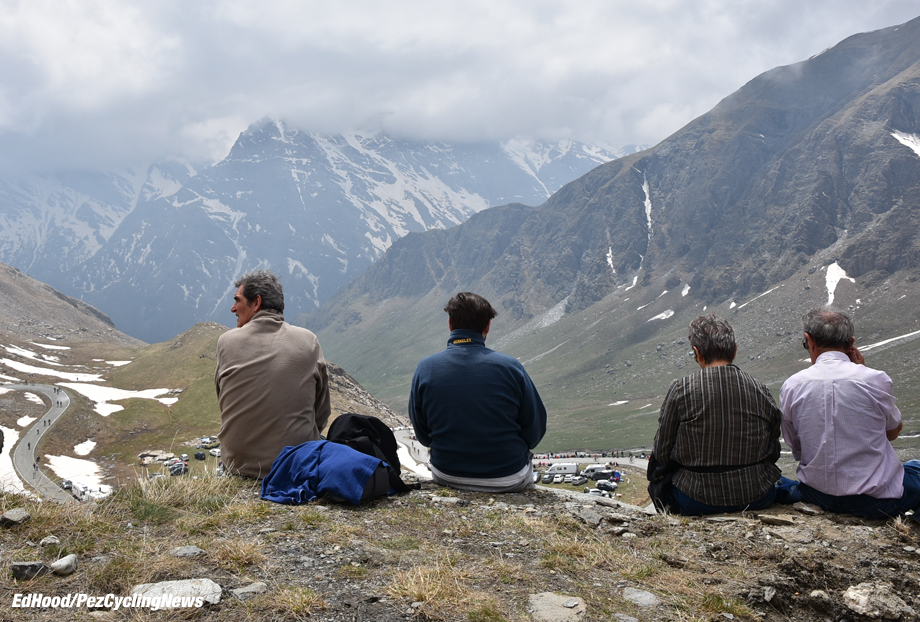 Despite the fact it’s edging up the ‘janitorial’ scale towards Le Tour levels of control – we always loved the laid backness of the Giro – it’s still an amazing experience.

It’s not just about guys on bikes – even though this year’s race had an epic last week – it’s the countryside, the fans traveling to the tops of mountains, the history, the weather and those little roadside bars where the sandwiches are amazing and the coffee perfect.